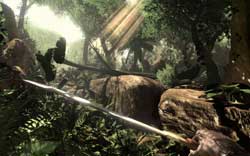 Developed by Ubisoft Montreal (Assassin’s Creed), Far Cry 2 is a mixed bag. Far Cry 2 puts players into the heart of an African country at war with itself. Your character has been sent there to assassinate a gun runner supplying to both sides of the conflict in an effort to stabilize the region. Unfortunately, on the way to your hotel, you come down with malaria and get caught up in a firefight. After this brief training mission, you get introduced to the leader of one of the nsides fighting each other and get impressed into service, taking on missions for them. And then Ubisoft Montreal adds the fun.

After the first few missions you run, the game really opens up, giving you free reign to move about as you wish. The African environment is rendered beautifully thanks to Far Cry 2’s Dunia engine. The way the sunlight breaks through trees is a sight to see. Day and night cycles are handled very nicely and the game begins to feel a bit more like an RPG with the vast expanse of land you could potentially wander about.

However, once the lead starts flying, any illusions about the game not being a first-person shooter go out the window. Firefights are intense and, while the enemy AI can be very wonky at times, combat is definitely fun. Weapons all have various levels of repair, the worst often leading to jamming and possibly exploding (not good). Weapons tend to aim very realistically, and generally you will not get good results just spraying and praying from the hip. You really need to aim down the sites of your weapon to achieve good kill shots. You are equipped with five healing syringes in the game, each will fix some of the damage you take in your travels. You can usually find more of these in first-aid kits scattered about.

Even more fun is a clever game gimmick envolving setting fire to the grasslands in order to burn your enemies alive. By using your friendly flame thrower you can not only use the fire as an offensive weapons, but also a defensive device, setting a wall of fire to shield you from oncoming enemies. Of course, you can always light an enemy on fire with it too, but I digress… 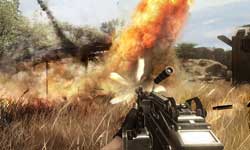 Far Cry 2’s landscapes are fairly huge, with tons of broken terrain to navigate. Ubisoft Montreal created a 50km2 area for gamers to play in, and it does feel like you are in the middle of nowhere. Getting from one place to another can take up to ten minutes in some cases. This driving (yes, you can use vehicles in the game) is often interrupted by armed checkpoints and other things to shoot at, but trust us when we say you will have some time to admire the scenery. Ubisoft has put all manner of vehicles into the game, and you can drive most any of them. Should a vehicle become damaged, you can even pull off to the side of the road and make repairs. In jeeps with mounted machine guns, you can toggle which position you want to be in (driver/gunner). This toggle yields a cool animation of you pulling yourself through the roll bars behind the driver seat into the gunner’s position and vice versa.

Far Cry 2 has a unique buddy system in which you make friends with NPCs along the way, which will help you on missions and so forth. If you die in combat, you will see a buddy carry you back to a safe house to heal up. Safe houses are exactly that, safe places you can hold up in when needed.

All is not perfect in Africa, however, with Far Cry 2 suffering from a few issues which can really hamper the fun. First is the spotty AI: I have seen enemies run to flank me and I have also seen them just endlessly run their vehicles into the side of a building. In order to battle your bout of malaria, you need special pills. However, to gain more of these pills, you generally have to do the same mission over and over again for various low-level contacts. Unfortunately, you need the pills to survive so Ubisoft is basically forcing you to play these out. And lastly, we found issue with the respawning of enemies at locations around the map. We took delicate time to plan our attack on an enemy factory, executed it perfectly and left for five minutes to another location. We came back and everyone had respawned. While we imagine an enemy organization would restaff a location eventually, to do so that quickly is just unrealistic and takes away from the fun of having decimated your opponents. 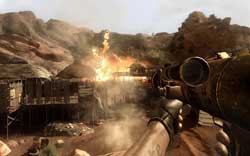 We would have liked to see enemy forces stumble upon the destruction and trickle in to re-position at these posts instead.

Aside from these issues, we hold that Far Cry 2 is a very solid shooter and well worth the purchase for anyone looking for such a title. Do not expect this to be Far Cry, there are no feral traits or sci-fi anything, this is a whole new animal. Ubisoft Montreal is to be commended on their fine work.