Gather ’round younglings and let me tell you a tale. You may be familiar with turn-based strategy RPG’s such as Heroes of Might and Magic and Disciples. You may have visions of glorious 3d graphics, orchestral scores, and other modern amenities. However, did you know that this genre of game, now taking a back seat (unfortunately) to RTS and FPS games, all started with a little title called King’s Bounty back in 1990? You see, table-top board game creators had started to bring that experience to the personal computer, which at that point was bristling with an Intel i486DX2 CPU and 8 to 12 MB of system RAM. If the phrase ‘vesa local bus’ means anything to you, well, I hope you skipped this part and moved on to the next paragraph. 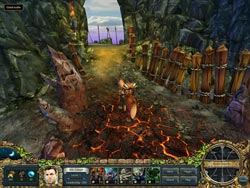 King’s Bounty: The Legend, puts you in control of a hero general, which you will select from three character classes: Warrior, Paladin, and Mage. Each of these archetypes has benefits and drawbacks which effect the various troop types under your command. For instance, as a warrior, you get no learned spells whereas the more magic-oriented classes will allow you to have magic spells at your ready in the spell book as opposed to just having to use magic scrolls.

Combat is handled on a hexagonal board similar to the table-top board game and is presented in a lush, fully 3d manner. The camera is able to swivel almost about 180 degrees to help you get a better view of the battle at hand. Why they chose not to go with a full 360 degree camera, we are not sure. The troops on the battlefield all roll for initiative to determine the order of movement and the action begins. When one of your units is selected, you may move it, attack the enemy, or use one of its special abilities. These range in complexity from simple bonus attacks to full-on resurrections and are all presented with pleasing 3d effects. 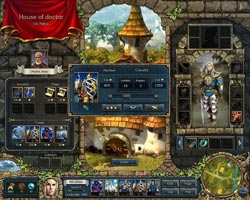 The combat is fully turn-based and brings a good deal of that old-school gameplay to the more modern aspects of the game which allow it to feel fun and not stale (often times in gaming, ‘retro’ means stale).

Unlike the Heroes of Might and Magic series, you are free to run your general and his armies about the world-map with relative impunity of action. There are no action points to be spent on moving in this mode (only in combat). Speaking of the world map, you move from zone to zone completing quests and gaining experience as well as items along the way. These items can range from sellable flotsam to unique armors and more. The world map mode is also in full 3d, with a very lush design. It is slightly reminiscent of World of Warcraft in terms of art direction. Along the way you will find different structure which you can not only find the aforementioned quests, but also stores to purchase new troops for your army. Your army is composed of five different unit types. The amount of each unit you can command is based on your Leadership rating. In some cases, you will be able to have more than you can handle in your ranks. These units, however, will act of their own free-will in combat, which is sometimes not a good thing.

One of the issues in the game worth mentioning is the auto-combat AI. Setting your troops to act on their own is a mixed bag. Sometimes you will see your grunts move in front of ranged units to protect them and other times you will see them run away even though they could have easily handled the oncoming enemy. My advice is to keep command of your troops at all costs. 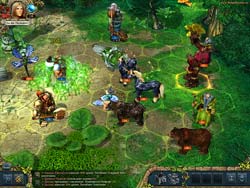 **This issue has an update to it in the Live Updates section. Another issue which I found to be irritating is the game’s auto-save feature which does not save your status prior to a battle. I found this out the hard way when I bit off more than I could chew by attacking an undead castle. I was slaughtered and had to load a game that set me back quite a bit. Manual saving is easily done, however the game is so engrossing you will find that you forget to do it!

One of the best things about King’s Bounty is all the beautifully hand-drawn artwork you will find in it: menu interfaces, character portraits, and more. We have to give some large kudos to the 2d artists of this game.

Also youngsters, in this world where companies would rather have a narrator read text for you, in King’s Bounty, you yourself will need to have the ‘reading’ skill to enjoy the game to its fullest. Yes, there is a lot of voice acting in the game, but there is also an equal amount of text strewn about which is full of incite into the game’s detailed-world and the quests you undertake.

The orchestral score of the game is incredible and enhances gameplay by setting the ‘mood’ of your current situation. Enter a land taken over by the undead and you will be treated to an equally creepy musical selection. It really appears as though Katauri pulled our all the stops in developing the game. 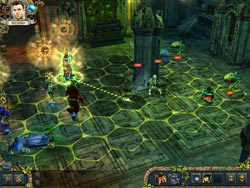 All of these elements combine wonderfully in King’s Bounty: The Legend, which succeeds in bringing the fun of classic turn-based strategy games into the 21st century, improving on them with modern features when possible. It delivers approximately 40 hours of gameplay and you will probably play through the entire game as each of the character types, not to mention all of the different army makeups you could possible have. This kind of replayability makes King’s Bounty: The Legend one of the easiest game purchases you will ever make.

That being said, there is a ‘quick-save’ feature that can be activated by pressing ‘F5’. The problem, according to our reviewer, is that the game gets so engrossing, you end up forgetting to do this. Having the game auto-save prior to combat would be a very nice feature.