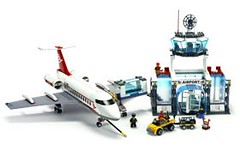 Managing traffic is the main goal of Airport Mania: First Flight. At its most basic level, the game tasks players with assigning aircraft a runway for landing, terminal for dis/embarkation, and an outbound runway. If the player does this within each aircraft’s ‘patience timer’, he or she is rewarded with cash and the airline’s happiness rating stays acceptable. Should the player allow planes to back up on runways and in line for terminals though, watch out! Keeping your airlines happy is one of the key goals in the game.

Controlling aircraft is very simple. Simply click on the plane you wish to control, then on the object you wish to send it to. Click on an incoming aircraft, for instance, and then click on a runway. The plane will automatically begin to land on the runway unless it is occupied in which it will wait its turn. These selections are context-sensitive which makes things a ton easier. If your plane is already at a terminal taking on new passengers and you select a runway, it knows that is for taking off only. 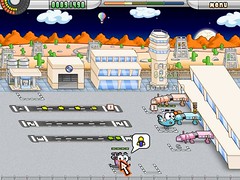 You can chain commands in the plane’s context together for better efficiency. For instance, you can select an inbound aircraft, then runway, and then terminal all in one foul swoop. Unfortunately, it is context dependent and when the repair hangars come into play (we’ll get to those), sometimes it is difficult to figure out how far that chain goes. From a repair hangar, you may have to click on a fuel pump or a terminal before selecting an outbound runway. It can be a bit of trial and error to catch the needs of the plane before they present it to you.

That is the game, basically…Now for the monkeys and the wrenches. Traffic will tend to get very heavy at some point in the game for you. The difficulty levels in each airport increase as you accomplish the previous level. At some point you will want to use that cash you have been accumulating to add objects to your airport. You can purchase parking spaces to place aircraft while waiting for a terminal, extra runways, additional/faster terminals, etc. Managing your money and making sound purchasing decisions is key in running a smooth operation. 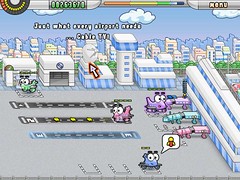 As you progress through the airports, you will see additional structures in the facility such as repair hangars and fuel pumps. The game adds challenge by surprising the player with additional aircraft needs (such as fuel) after the plane offloads its passengers.

The game also features an awards ‘achievement’ system in which players are given medals and certificates if they complete certain criteria. Some are simple to obtain, such as to succesfully land a new type of aircraft, and others are not. Some you have to figure out on your own based on hints given in the awards screen.