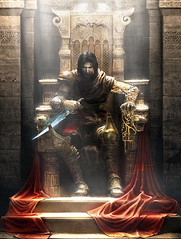 Official Release:
Today Ubisoft, one of the world&#8217;s largest video game publishers, announced that a new Prince of Persia is scheduled to release towards the end of 2008 for the Xbox 360&#174; video game and entertainment system from Microsoft, the PLAYSTATION&#174;3 computer entertainment system and PC. This new Prince of Persia marks the debut of the critically acclaimed franchise on next-generation consoles. Developed by Ubisoft&#8217;s award-winning Montreal studio and the same all-star team that created the previously acclaimed Prince of Persia&#174; Sands of Time trilogy, Prince of Persia is opening a new chapter in the Prince of Persia universe, featuring a new breed of gameplay. The game is poised to rejuvenate the action-adventure genre in addition to introducing a brand-new illustrative art style.

Ubisoft will also release a Prince of Persia game specifically designed for the Nintendo DS&#8482; system, featuring an entirely new storyline and new characters. More details to be unveiled in the future.