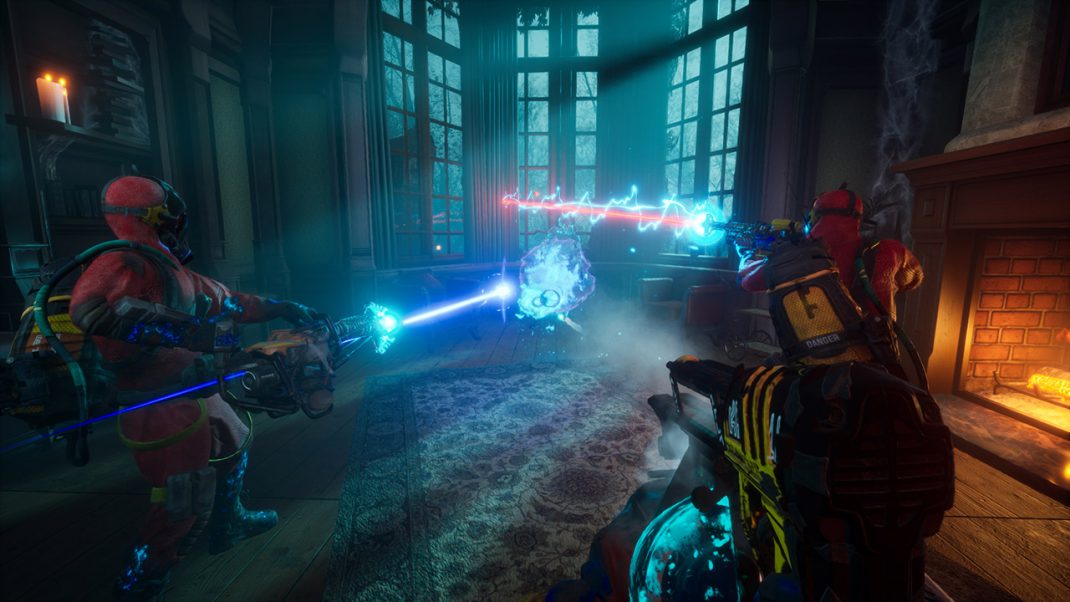 Take control as either hunter or ghost in the chaotic multiplayer madness that brings a fresh, thrilling take to a classic prop hunt. As ghosts battle ghost hunters in a hijinks-heavy tussle between the living and the dead, spirits must possess objects in order to evade the hunters’ DIY gadgets and gizmos designed to detect and dispose of them. Use the Spectrophone, Radar and Pathfinder to detect ghostly presences, and pair them with a range of sledgehammers, harpoons, and salt-spewing shotguns to banish spirits to another realm.

But the ghosts have a trick or two up their spectral sleeves as well. While trying to keep their ectoplasm build up low to avoid the hunters’ steely gaze, ghosts can claim a variety of supernatural powers, which include turning invisible, corrupting seemingly innocuous pieces of furniture, and conjuring a deadly miasma. They can even become the ultimate prankster and masquerade as a hunter’s doppelgänger!

If even one ghost remains intact before midnight hits, the witching hour begins, and all ghosts return to form as vengeful spirits who now have the upper hand. The hunters are now the hunted, and must use their wits and tools in ingenious new ways until evac arrives.

The world was first introduced to Midnight Ghost Hunt at E3’s PC Gaming Show back in June 2019, where it showed its first full trailer and announced its partnership with Coffee Stain after a few work-in-progress clips racked up millions of views on Reddit in November 2018 and March 2019.

In February 2021, Coffee Stain welcomed two studios on board to help Vaulted Sky meet the quickly growing expectations of the project. She Was Such A Good Horse is made up of industry veterans with years of experience, while Ernst & Borg Studio have brought over their real-world architectural know-how to design Midnight Ghost Hunt’s diverse virtual environments.

After successful closed betas over Halloween, January, and now just before launch to whet players’ appetite, Midnight Ghost Hunt is now finally headed into Steam Early Access for everyone to enjoy, having debuted its launch trailer at the jam-packed Future Games Show last week.

“We can’t believe the day has finally come,” said Sam Malone, creator and lead developer at Vaulted Sky Games. “As we played Midnight Ghost Hunt with testers throughout the closed betas, they’ve continually remarked on how much the game manages to improve on itself every time. Though we’re very happy with what we have, launching into Early Access gives us the chance to keep listening to everyone’s feedback as the game is opened to a huge new audience. I look forward to seeing you on the hunt!”

Sebastian Badylak, Executive Producer at Coffee Stain Publishing, said “It’s been an absolute pleasure working with Sam and the extended team, and their passion and drive consistently wows us. We’ve had such fun participating in all its tests, alphas and betas over the years, and we’re so proud to be able to bring you all a game that’s so lovingly crafted and makes your heart race every time you pull off a well-timed combo or make a daring escape. We can’t wait for players to take their cunning plays to a new level, and guide us through development on our way through Early Access.”