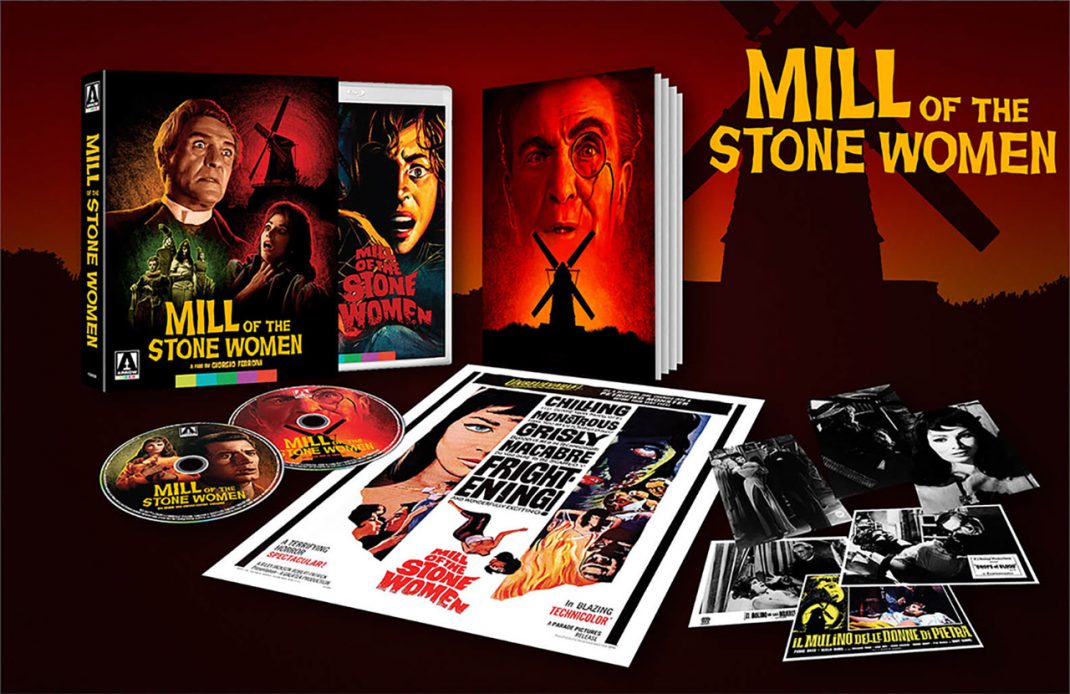 When pressed to think of Italian horror your mind likely immediately lands on giallo, the forebearer to the slasher flick. You may jump straight to the wave of zombie cash-ins of the 70s and 80s. What you probably don’t picture is Hammer-esque gothic dramas. Arrow Films is out to change that with their release of Giorgio Ferroni’s 1960 classic, Mill of the Stone Women, Italy’s first color horror film! Read on to find out if this release is rock solid or merely dust in the wind.

As Mill of the Stone Women opens, writer Hans finds himself in picturesque Holland to work on a story about the… well, the titular Mill of the Stone Women. It’s literally right there, just downriver from where Hans makes landfall and name checked within sixty seconds. Hans sets off for the mill where sculptor Professor Wahl lives and works, creating a carousel of sculptures that wouldn’t be out of place in a carnival dark ride.

Allowed to board in the Mill’s attic, Hans promptly falls in love with the professor’s daughter, Elfie. Hans and Elfie’s love is not meant to be, however, as Hans’ girlfriend, art student Liselotte, arrives at the mill. Further complicating the Hans-Elfie-Liselotte triangle is Elfie’s fatal blood disease, missing locals, and the paranoid machinations of Professor Wahl. Where does the story go from there? Some truly bonkers places that I won’t spoil in this review. Suffice to say, if you’re planning a trip to Holland go ahead and uncheck the “Creepy Art Instillation Windmill” box in your AirBnB filters. 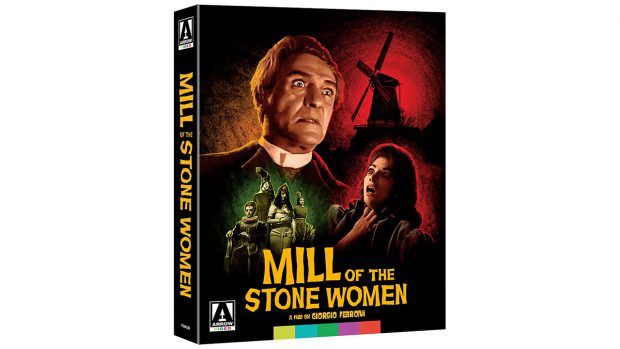 Mill of the Stone Women is an effective horror film from a time when the genre was just beginning to blossom in Italy. Setting itself apart from its contemporaries in 1960s Italian neorealist cinema, the film is beautiful to look at with its use of location shooting in the quiet marshlands of Holland and stunning set design of the mill itself. While the special effects definitely show their age, the clockwork parade of sculptures has a unique charm befitting what is essentially a mid-century European roadside attraction. While the film can feel a bit slow paced at times, it wraps up right at the hour and a half mark making for a short, sweet slice of Italian horror history.

Mill of the Stone Women is presented in its original 1:66 aspect ratio from a brand new 2k scan of the original 35mm negative by Arrow Video. The restoration is clean with few remaining imperfections outside of some visible dirt and scratches in the opening titles. The color grading looks good with a consistently cool tone that matches the foggy Holland marshland the film takes place in without interfering with skin tones. The audio mixes were restored from their original mono tracks and hold up as well as any Italian films of the time could be expected to as it was commonplace for sound and dialogue to be recorded entirely in post. That being the case, it’s not abnormal that sound can slip out of sync.

Leading the extras is an audio commentary by horror and fantasy historian Tim Lucas. Lucas offers an insightful academic track that touches upon everything from production anecdotes to putting the film in context against its contemporaries in Italian cinema and predecessors in gothic horror. Lucas begins the track by speaking to his personal history with the film going back to his own childhood and its clear that he has a deep love and intimate understanding of the film that makes the commentary a must listen.

Next up is Mill of the Stone Women and the Gothic Body, a visual essay by Arrow stalwart Kat Ellinger. In her essay, Ellinger spends twenty minutes speaking to the trope of wax figures in horror, its history throughout horror of the early 20th century, and its origin in Victorian cabinets of curiosity.

On the archival front, Turned to Stone and A Little Chat with Dr Mabuse are lengthy features that center on interviews with actress Liana Orfei (Annelore, one of the missing townsfolk) and actor Wolfgang Preiss (Dr Bohlem, Wahl’s assistant) respectively. Backing these up are trailers, image galleries, and alternate opening title sequences. The real stand out feature of this release are the multiple cuts of the film. From the director’s cut of RoboCop to the censored television version of Mallrats and the fan edit of Phantom of the Mall, Arrow has proven themselves to have a talent for digging up these alternate cuts and they’ve outdone themselves on Mill of the Stone Women. Up first on disc one you’ll find two versions of the film- The original Italian version and the dubbed English export version, both running at 96 minutes with the only difference being localized titles and different audio. Move on to disc two, exclusively in this first limited edition run of the film, and you’ll find two more cuts- the French version and re-cut American version. While the French edit comes in a bit shorter than the original release, the American cut has the most striking changes. A voiceover narration, newly shot inserts, rearranged scenes and added visual effects, the film is punched up a bit to satisfy contemporary American audiences.

Mill of the Stone Women is packaged in Arrow’s standard hard slip case used for all of their limited edition releases. Inside the case you’ll find a reversible slip cover featuring original and
all new cover art, a fold out poster and a sixty page booklet featuring essays covering the making of the film and the differences between the different cuts of the film, excerpts from contemporary reviews of the film, production stills and information on the restoration.

Arrow Video has long been the premiere label for boutique horror releases. After a long run of giallo films, it’s refreshing to see them turn their attention to a different corner of Italian gore with Mill of the Stone Women. While not as packed with supplements as other releases, a celebratory commentary track and the inclusion of four different cuts of the film help Mill of the Stone Women earn its spot on the shelf of any horror collector.

Mill of the Stone Women 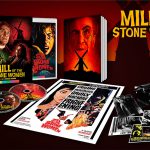