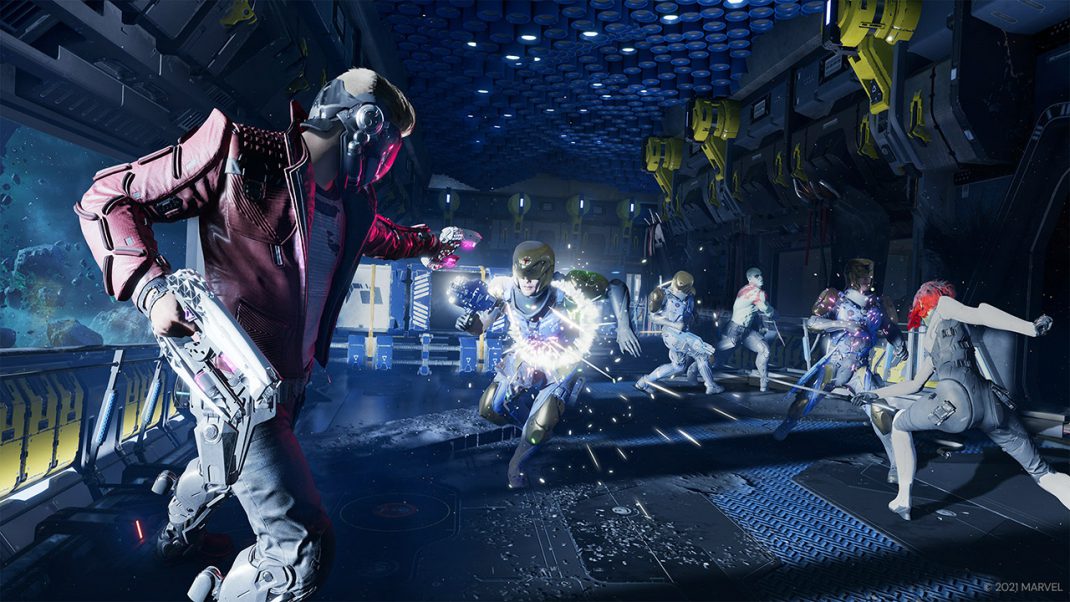 Marvel’s Guardians of the Galaxy Review – Definitely Worth A Playthrough

I remember when I first heard about Phase Two of the Marvel Cinematic Universe and how there was going to be a movie based on Guardians of the Galaxy, a comic book superhero group I was entirely unfamiliar with. And wow did it sound ridiculous: A racoon, a blue and red muscle man, and so on. It sounded incredibly out there for what I had come to expect from comic book / super hero movies at that time. Who would’ve known that Guardians of the Galaxy would become my favorite series and team of the MCU films. I was even skeptical about the Guardians of the Galaxy ride that eventually took over Tower of Terror at Disney’s California Adventure in Orange County CA but of course I loved that as well once I rode it. Marvel’s Guardian’s of the Galaxy for PS4 has been no exception.

First off, without any doubt, Marvel’s Guardians of the Galaxy is hands down the most beautiful game I’ve ever seen on PS4. The colors are incredible and vibrant without being so much so that they become muddy or hard to look at when trying to focus on what’s going on right in front of you. Playing as Peter Quill, you are free to wander your surroundings as you wish so it’s good to look anywhere and everywhere, especially since there’s crafting materials and other things scattered around the environment to collect. Traversing inside The Milano, the ship that the Guardians of the Galaxy travel around in, is definitely a highlight to see just how amazing this game looks. You have full access to the ship at times and can look through portholes, or walk around the large crew cockpit that has a giant glass canopy looking out into space. As you’ll be travelling throughout the universe, the views are constantly changing so when you have the opportunity to walk around The Milano, definitely give the entire place a walkthrough to see what’s to see out in the galaxy. The scenery gets even better as you start visiting different planets and space stations. The story is set off by owing a massive debt to Nova Corp who arrest the Guardians of the Galaxy for smuggling contraband. The Nova Corp ship you’re taken aboard is just as amazing as the ground missions on moons and planets you visit both before and after you’re arrested. I’m honestly jealous of anyone who picks this up for PS5 because I bet it’s going to look insane. 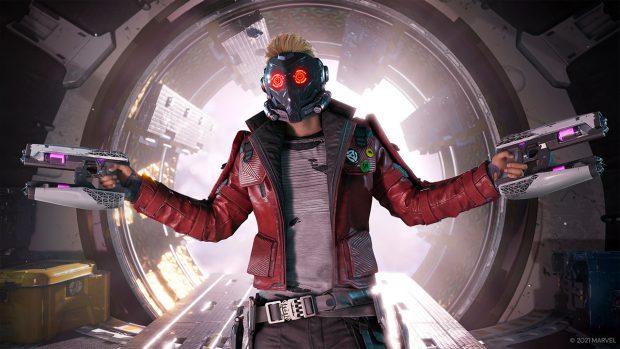 While you’d think that Guardians of the Galaxy would lend itself to being an open-world type of experience, the gameplay is more along the lines of a cinematic adventure with just as many dialogue options to respond (or not respond) to as there is action. Let’s focus a bit on the first part. Marvel’s Guardians of the Galaxy does give off an essence of the Tell Tale Games from years back like their most famous The Walking Dead series where you played the role of Lee. Along with dialogue options, there are also QTEs that, although easy to deal with, more than often lack any consequence for a incorrect button push. Even if Peter dies, you’re instantly brought back to that moment to try again. Though these little breaks in between the action are fun, sometimes they run a bit too long without any action whatsoever. At least one chapter so far had no enemies in it whatsoever and was just dialog and QTEs. While still engaging, Guardians of the Galaxy is a very linear experience that very much feels like you’re watching and often interacting with a Guardians of the Galaxy film and taking part in the action whenever it comes around. Though the dialogue options can lead to positive or negative future consequences, at times I felt confused if I had made a correct dialogue choice or not based on the few times the game informs you in text that your actions had a specific affect on your team or the individuals you were speaking with.

The fighting action can be a lot of fun when it does occur. As this Guardians of the Galaxy is definitely an exploration of the different places and their inhabitants across the galaxy, you’re going to encounter a lot of characters and enemies that you’d come to expect from the Guardians of the Galaxy universe. Various enemies have their weaknesses which can be exploited by power-ups and abilities earned by the team. While you can customize attacks per character at any given time, especially as you begin to upgrade team members, you’re only in control of Peter Quill so setting him up specifically to perform the way you want him to is an ideal way to start. While giving other characters new abilities like Gamora using her sword in one brutal attack on a single enemy or various moderate attacks on multiple enemies, it does take a lot to get the hang of. Since you’re not switching to directly control these characters like you would in say GTA5, it takes a lot of practice to select the team member you want, then make them perform the specific ability you want them to, all while in the heat of battle. As you add on abilities, you then have to remember which ability is locked to which character that you’re selecting. So in essence, while you’re being attacked and firing back as Peter Quill, you’re also pressing a button to bring up the team, pressing another button to select the correct team member, then another button push to activate the ability you want them to use. There were multiple times, especially once team members have multiple abilities where in the midst of being bombarded with enemy hits, I selected the wrong team member ability which lead to a lot of deaths and checkpoint restarts. I’m still getting used to it and I’m already leery on adding more abilities to team members until I lock down who can do what with which buttons. While some battles are relatively easy, some do turn into NES Silver Surfer playthroughs where there’s enemies and attacks coming from everywhere and it’s easy to become overwhelmed and just start button mashing. On top of all that, your team members will also need to be revived if they go down from loss of health or needing to be released from things like being frozen in place. While Groot does have a healing ability that can assist you with this down the road, he doesn’t start with that ability and thus you have to earn enough points to upgrade him. Again, Guardians of the Galaxy doesn’t lean entirely on the game being all action so you’re allowed plenty of time to breathe in between battles, sometimes more than I’d prefer. 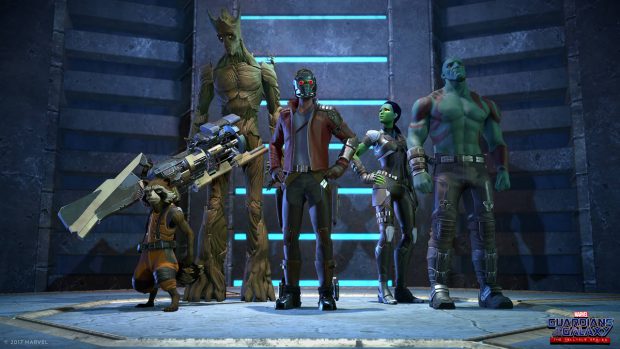 The item crafting is incredibly dumbed down, sad to say. There are a total of 2 different crafting materials to find scattered around the environments to then use at work benches that can be found both on your ship as well as throughout the worlds. With the help of Rocket, you can upgrade both Peter Quill’s weapons as well as gear like armor, jet boots, etc. It’s incredibly basic and I would liked to have seen a lot more in the way of customization, not just for Quill but also for the team and The Milano. With how resourceful Rocket can be in the Guardians of the Galaxy movies, I expected almost everything used by the team to be upgraded in all sorts of ways. Again, the game isn’t all action so it’s understandable not having gone that route but the very simple crafting aspect of the game could’ve used more attention.

Of course, Marvel’s Guardians of the Galaxy comes with a rocking soundtrack. Not only does it have it’s own custom rock songs made specifically for the game, it also has it’s own Awesome Mix with plenty of licensed tracks like Motley Crue’s “Kickstart My Heart”, Soft Cell’s “Tainted Love”, and the Rick-rolling “Never Gonna Give You Up” by Rick Astley, just to name a few. While these songs can play at times in battle when you use the “Huddle Up” option to give your team a little boost in the fight, you can also interact with the radio on The Milano and play any of the songs on the soundtrack in their entirety through the ship’s speakers, which is another nice thing to do while you’re wandering the ship talking to the crew or working on upgrades with Rocket. 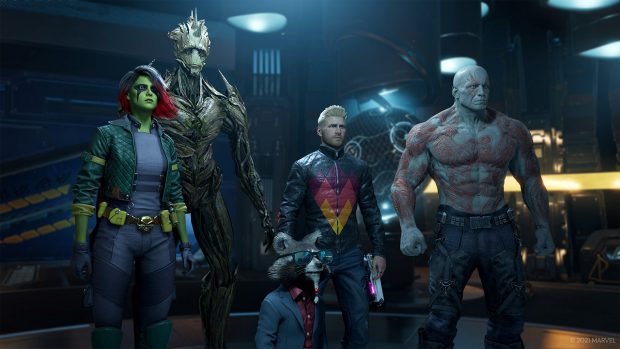 What really drives Guardians of the Galaxy home is the characters, both how they look as well as their voice acting performances. The characters themselves look absolutely flawless and while they might not entirely look like the Guardians of the Galaxy from the films, the movie character skins, as well as many other looks, are hidden all over the game so there’s lots of customization options once you track them down. And it’s not just the Guardians of the Galaxy themselves but also the friends, enemies, and otherwise that they come across. Lady Hellbender looks and acts like you’d expect a Guardians of the Galaxy villain to act. It’s incredible how great the characters’ motion capture created a believable cast and the voice acting along with it is nothing short of Hollywood quality. Even on a PS4 Pro, I was impressed by how far games have come on just this generation alone. Even though I’m not the biggest fan of linear, dialogue heavy cinematic games, the cast definitely kept me playing through what is an already great game. And you definitely get the feel with the Guardians of the Galaxy themselves that, while they’re a team, they’re not always in agreement and sometimes even get angry with each other, the way they interact with each other at all times, the way they interact with Peter as he talks to them individually at times, you really get a feel of each person’s feelings for each other in the group and how they have their own things going on, making them feel like actual people as opposed to just characters in a game. Rarely do I ever get a feeling in games where there’s genuine “feelings” going on with characters, that you’re actually invested in what’s going on in their lives, even if it has nothing to do with their current adventure.

Don’t get me wrong, just like I would love to see a super violent R-rated Rocket and Groot film, I would absolutely love to see the Guardians of the Galaxy license become a massive open-world game someday. But Marvel’s Guardians of the Galaxy has definitely hooked me even after the initial realization that the game wasn’t originally what I expected it to be. The visuals and sound are incredible, the characters are Hollywood blockbuster quality, and the story is something that even the movies would have a hard time putting together under a reasonable budget. It’s a fun, story-driven adventure with just as much action as there is dialogue and story development and while I wish there was much more to explore, Marvel’s Guardians of the Galaxy will definitely blow you away.

Marvel's Guardians of the Galaxy 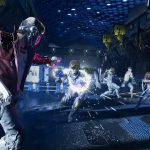