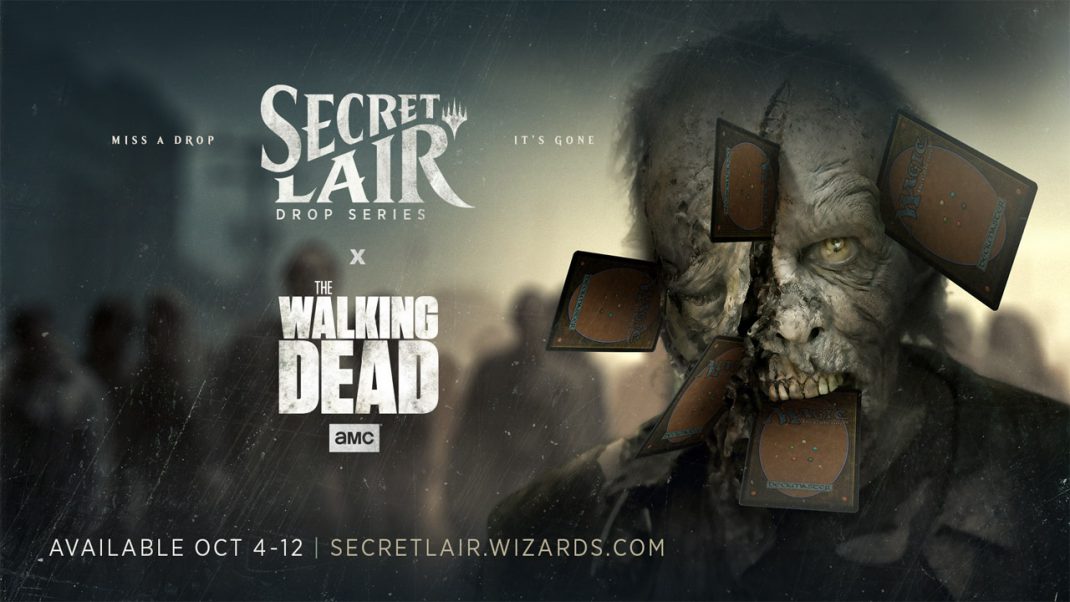 The Walking Dead Coming to Magic: The Gathering

Wizards of the Coast has today announced their latest Magic: The Gathering Secret Lair drop, a one-of-a-kind crossover with the universe of AMC’s The Walking Dead, which will be launching October 4th. This super-limited drop will include an all-premium-foil set of cards, with all but one of them being revealed in the coming weeks and the last one being kept a secret for players to discover.

AMC’s The Walking Dead Secret Lair drop will be open for pre-order for a very limited time between October 4th and October 12th. The Sun., Oct. 4th, launch will coincide with AMC’s “We Are The Walking Dead Weekend,” beginning with The Walking Dead Special Event: The Whisperer War Final Showdown at 9/8c, followed by the premiere of The Walking Dead: World Beyond at 10/9c, and ending with a special episode of Talking Dead at 11/10c, where fans can anticipate an unboxing and preview of the cards. With this, the set will be available for preorder at 11:30pm ET.

“Wizards of the Coast is thrilled to collaborate with AMC to bring these iconic characters to the greatest strategy card game,” said Bill Rose, SVP of Magic: The Gathering design and development, Wizards of the Coast. “We can’t wait for fans of both Magic: The Gathering and AMC’s The Walking Dead to discover fun new ways to play when they add this Secret Lair drop to their collection.”

“Magic: The Gathering is one of the most seminal works in the history of gaming,” said Clayton Neuman, VP of Games for AMC. “So, we were beyond thrilled to work with Wizards to pair it with one of the most beloved series in the history of television. These cards are a perfect blend of the two universes, and we can’t wait for fans to get their hands on them and discover all the tricks we’ve hidden up our sleeves.”

The cards included in this very special Secret Lair drop will be completely new to Magic: The Gathering, depicting the iconic characters of the long-running and critically acclaimed TV Series. The included cards have never been seen before in Magic: The Gathering and bring unique gameplay and text different from any other printed cards, which will only be legal in Legacy, Vintage, and Commander.

Magic: The Gathering’s Secret Lair is a collection of lovingly curated, limited-edition releases featuring some of the most exciting artists working today. The most recent drop celebrated a fan-favorite Magic character with Yargle Day on September 3rd, having previously launched other drops with varied themes, such as supporting International Women’s day, collaborating with Wizard of Barge for an oozing, all-slime crossover, or getting involved with International Dog day. You can learn more about Secret Lair on the official site.