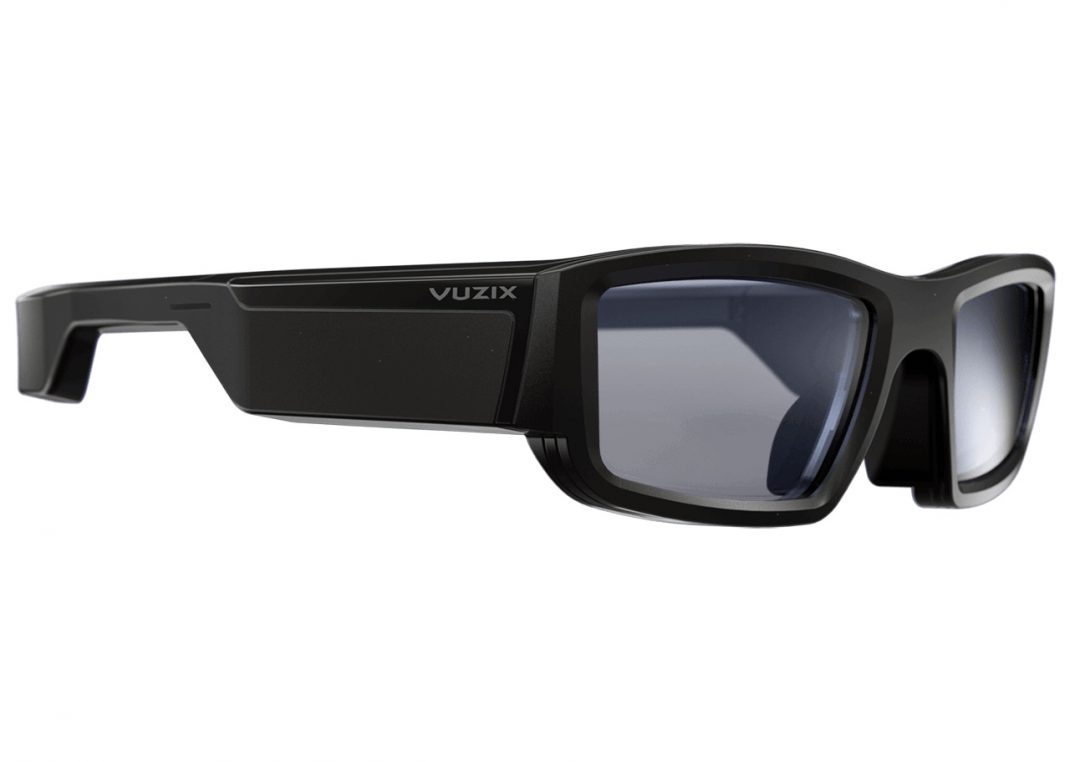 ROCHESTER, N.Y., January 5, 2018 – Vuzix® Corporation — Vuzix® Corporation (VUZI), (“Vuzix” or the “Company”), a leading supplier of Smart Glasses and Augmented Reality (AR) technologies for the consumer and enterprise markets, is pleased to announce the official unveiling of the Vuzix Blade™, which was awarded four International CES Innovation 2018 awards in the areas of Fitness, Sports and Biotech; Wireless Handset Accessories; Portable Media Players and Accessories as well as Computer Accessories.

The Vuzix Blade AR Smart Glasses provide a wearable smart display with a see-through viewing experience utilizing Vuzix’ proprietary waveguide optics and Cobra II display engine. It’s like having your computer or smartphone screen information right in front of you, wherever you go. The Vuzix Blade weighing in at less than 3 oz. represents the first pair of smart glasses that provide the wearer with a sizable virtual screen and brilliant pallet of colors via a thin completely see-through lens, in a fashionable form factor. The Vuzix Blade features adjustable FOV location and brightness, and is prescription ready, enabling any wearer both indoors and out to enjoy a comfortable visual experience. The Vuzix Blade, which can be paired seamlessly to Android or iOS phones enables individuals or workers to leave their phone in their pocket while visually presented with location aware content driven by the user’s phone. Built for today’s world and usable for work or play, the Vuzix Blade AR Smart Glasses offer the wearer heads up and hands-free mobile computing and connectivity, in an unprecedented form factor.

Today Vuzix released its latest video on the Vuzix Blade™ AR Smart Glasses which can be seen on the Vuzix YouTube channel.

The Vuzix Blade is the natural evolution of AR, providing the user with the wide range of features and capabilities available today, in a form factor that people will want to wear. Directions, menus, weather, events, stocks, video conferencing, sports updates, social feeds, bio-metrics and more, right in front of you, literally. AR smart glasses that right out of the box provide hands-free access to all the alerts from your phone, while allowing you to leave your phone in your pocket. The large Vuzix Developer community will be able leverage the open Android platform of the Vuzix Blade to bring new and creative ideas to life. Supported by Vuzix new App Store, Developers can offer or sell their applications to all Vuzix Blade users, expanding an ecosystem of AR applications for real world use today.

For consumers, the Vuzix Blade is the perfect companion to your android or iOS smartphone allowing users to always be connected, stay informed and never miss a photo shot. The Vuzix Blade’s companion app will allow users to seamlessly pair their Vuzix Blade Smart Glasses to their smartphone to leverage applications and manage notifications, while leaving their phone in their pocket. Experience overlay information such as mapping directions, restaurant menus, and weather information, capture POV video and pictures, answer phone calls and texts right from the glasses, and more. The intuitive and feature packed Vuzix Blade OS allows the user to simply and intuitively navigate via simple swipes and taps, or leverage voice controls and external AI systems.

While the Vuzix M300 smart glasses are the device of choice in many enterprise deployments, there is a sector of business, especially B2C, in which the form factor is a deterrent. Visual appearance and portability are a crucial requirement when it comes to servicing retail customers in big box retail chains, supermarkets, restaurants, department stores, and other client facing work environments. The Vuzix Blade with its fashionable form factor and all-day wear-ability fills this gap. For the enterprise user, the Vuzix Blade will pair with their smart phone or connect directly to a Wi-Fi network, allowing for custom secure industrial applications. Although not as powerful as the stand alone Vuzix M300 smart glasses, the Vuzix Blade will open new and organic growth opportunities within the enterprise space.

“The official unveiling of the Vuzix Blade™ AR Smart Glasses from its production ready tooling is a pivotal moment for Vuzix and for the AR industry as a whole, as it introduces the first truly wearable pair of light weight AR smart glasses for consumers and enterprise,” said Paul Travers, President and CEO of Vuzix. “What differentiates the Vuzix Blade from all existing or proposed AR smart glasses and mixed reality head mounted computers, is that it’s built for today’s user. With a fashionable form factor, a brilliant display, and a broad range of features that allow the user to experience AR at work or play, the Vuzix Blade is the first pair of smart glasses that people would actually enjoy wearing. Just as important, it is the only AR-enabled pair of smart glasses that work right out of the box, without the need for programming – just connect to your device, customize your settings and go. Either at work or at leisure, the Vuzix Blade Smart Glasses are the most compact and sleek AR-enabled smart glasses available today.”