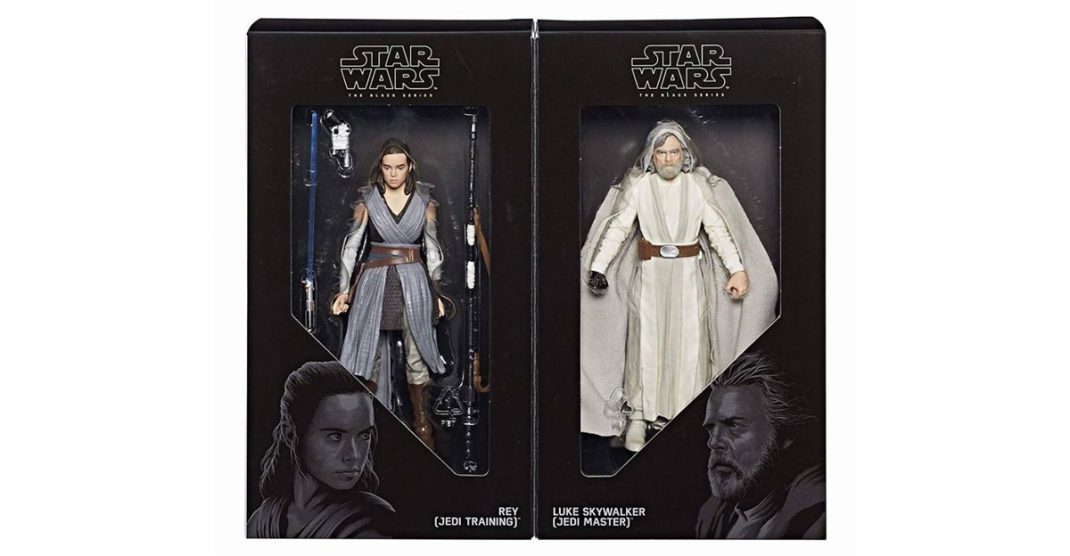 One of the coolest things about the San Diego Comic-Con is that exhibitors like Hasbro bring out some really neat exclusive toys for attendees to purchase. We got the chance to purchase a couple items while there, and wanted to bring you a quick rundown of them – starting with the Star Wars The Black Series Luke & Rey boxed set. This made a big splash at the convention as it is technically the first Star Wars The Last Jedi toy. Now, while Hasbro and Disney have announced that September 1, 2017 will see a huge release of Star Wars toys for the upcoming films, these exclusives were just for conventioneers to purchase and not available at retail yet. 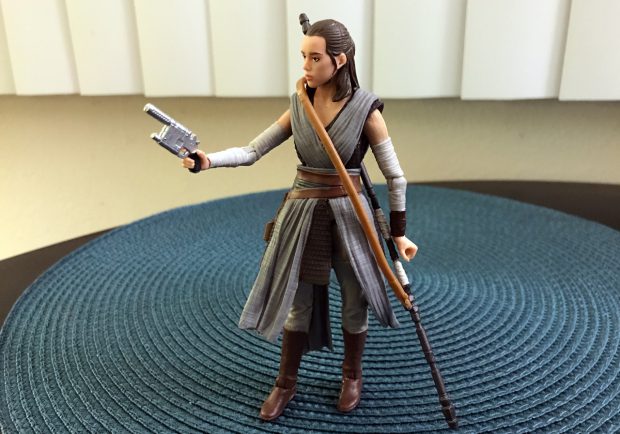 This character two-pack features Rey and Luke as they appear at the end of The Force Awakens and, if rumors are correct, right at the beginning of The Last Jedi. Both action figures feature detailed costumes and Luke even comes with a fabric cloak which, while being somewhat of a pain to tie around the character, is pretty nifty. One thing that I was hoping would be on the Luke figure was a lightsaber hook or holster. His belt has a non-functional pouch but nothing else of note. The Rey figure is a little more dynamic, featuring a holster for the pistol that the late smuggler Han Solo gave to her in The Force Awakens. Both character faces don’t look all that much like the actors who play them in the films, but the general idea of who they are is apparent. Rey’s hands are very detailed down to individual fingers, so be careful when making her grip the included accessories to not accidentally bend or tear them off. Each character features a large number of articulation points, so posing them into whatever scene you wish should not be too difficult. 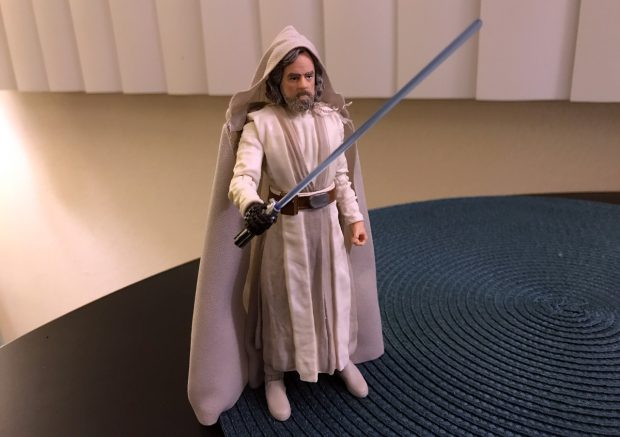 This is where the Luke Skywalker figure comes up a little short (and not just in the Stormtrooper sense of the adjective). Luke doesn’t come with any accessories other than his cloak. No weapon, nothing. Now, I would imagine that part of this is due to secrecy – if Luke wields a Jedi weapon (or any other implement) in the new film, it is a big movie moment and one they would not want spoiled in action figure form. Rey, on the other hand, comes with numerous accessories. She has her staff, Anakin’s/Luke’s/Rey’s lightsaber, and her pistol.

Rey’s staff comes with a loop that you can utilize to have the figure wear it around her torso, and the pistol is a very decent representation of the one in the movie – especially on such a small scale. Her lightsaber his also well-detailed, I just wish the blade was removable so that it was a bit more flexible in terms of designing a scene for the figures. Of course, this is great news for the kiddies out there as it is one less thing they can accidentally swallow or lose, so I definitely understand. 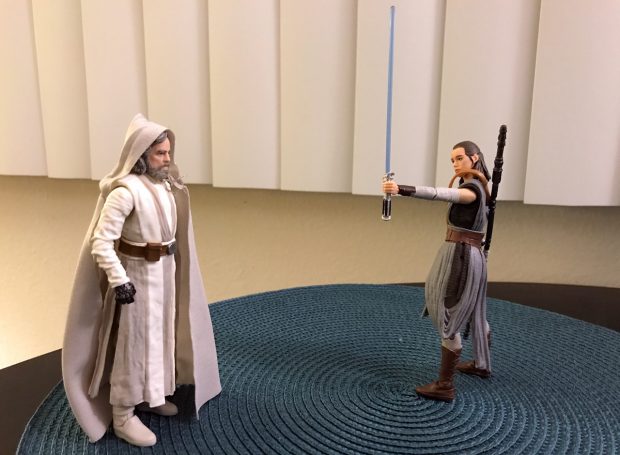 Hasbro’s Star Wars The Black Series Luke & Rey boxed set is a very cool collector’s piece for the upcoming Star Wars The Last Jedi. Both characters are present and come with some nice accessories. They are not perfect likenesses of the actors, but close enough for action figures in The Black Series lineup. They are currently available for various prices on places like eBay, but stay-tuned as the rumor mill is stating there will be new versions of these figures released on Star Wars toy day in September. 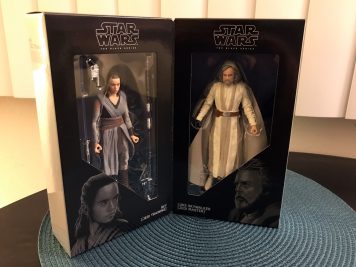 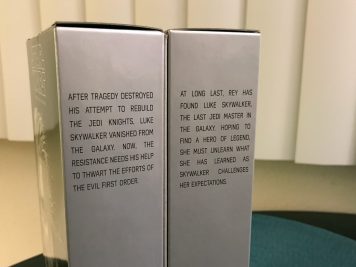 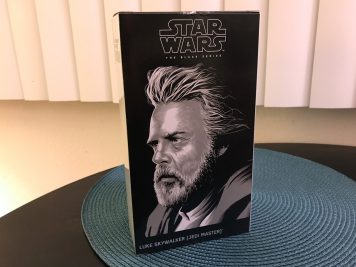 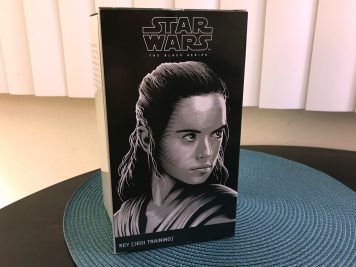 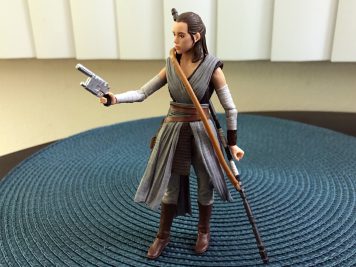 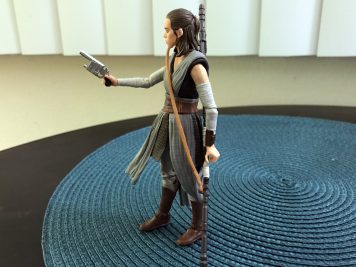 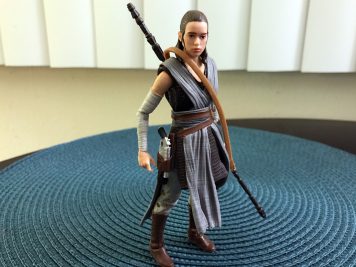 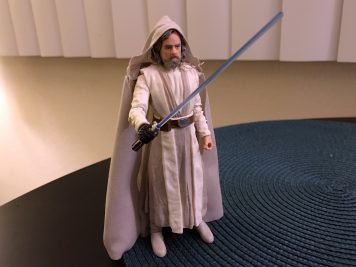 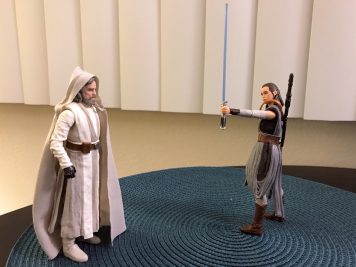