I love horror movies – especially those horror movies that make you not only jump, but also think. So, when you give me one that does both it is like a Reese’s Peanut Butter Cup for my brain.  Abattoir, based on the graphic novel of the same name, starts with a quote from one of the father’s of transcendental thinking, Henry David Thoreau, and has actors like Lin Shaye, Dayton Callie, and Joe Anderson. Putting all this together, I got the feeling that Abattoir was going be an odd and suspenseful ride.

I sat down in my empty house, all the lights out and just a few feet from the screen with potty breaks taken care of in advance.  And I watched.  Then I shook my head and watched again.  Two days later and some housemates come in and I am there in the dark watching the same movie.  You might want to take this as a point to great acting, great story, great directing and you would be right on these but most of all it would be for understanding.

“Our houses are such unwieldy property that we are often imprisoned rather than housed by them,” Henry David Thoreau quote at the top of the film.  I totally nod in agreement to its relevance and tone for starting the flick and this theme carries on through the whole film. I will keep this review spoiler free giving you little more than you could gleam from a movie description that would accompany it’s rental and scenes that would be seen in a preview.  I’m just going to give you a slight taste here so you might tell if it is to your liking and if you want to make a meal of it for a couple of days that will be up to your palate.

After the brutal and very creepy murder of sister, brother-in-law and nephew, Jules goes back to reminisce at the house only to find it had been sold, escrow and renovations done all in a week after their deaths.  The renovations consisted of tearing out the entire room they were murdered in.  If you don’t know housing you couldn’t really get any of that done in a week even paying cash which the buyer did. 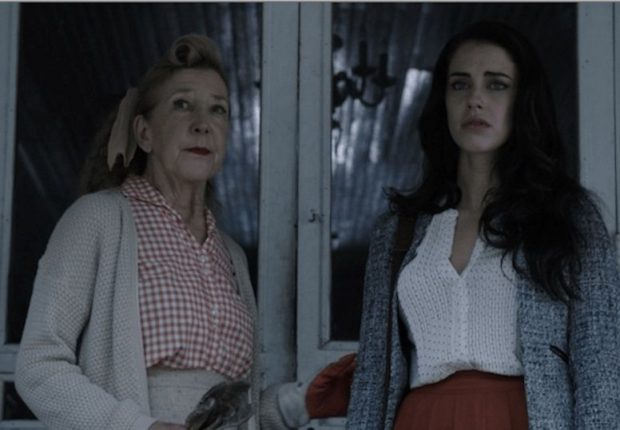 So Jules makes the journey to find out who did it as well as discover some family secrets along the way.  This is where I stop with the details and tell that the directer and cast tried to keep very true to the source material even when it made performances seem a tad hammy and when shots seem to lack movement inside the camera shot because they are an example of a graphic novel comic frame.  There is an amazing beauty to the lighting and effects that are at the same time somewhat simple but then help tell the tale in a believable fashion.

The film is a heavy one but extremely well told.  I can’t state enough how movie is not light, you really need your thinking cap on.  There are plenty of twists but the more you are thinking the more they feel like progressions of the story instead.

One of the last lines is “It is said that one can never go home again but I wonder do we ever truly leave.” I wonder if Abattoir ever leaves you once you have watched it.