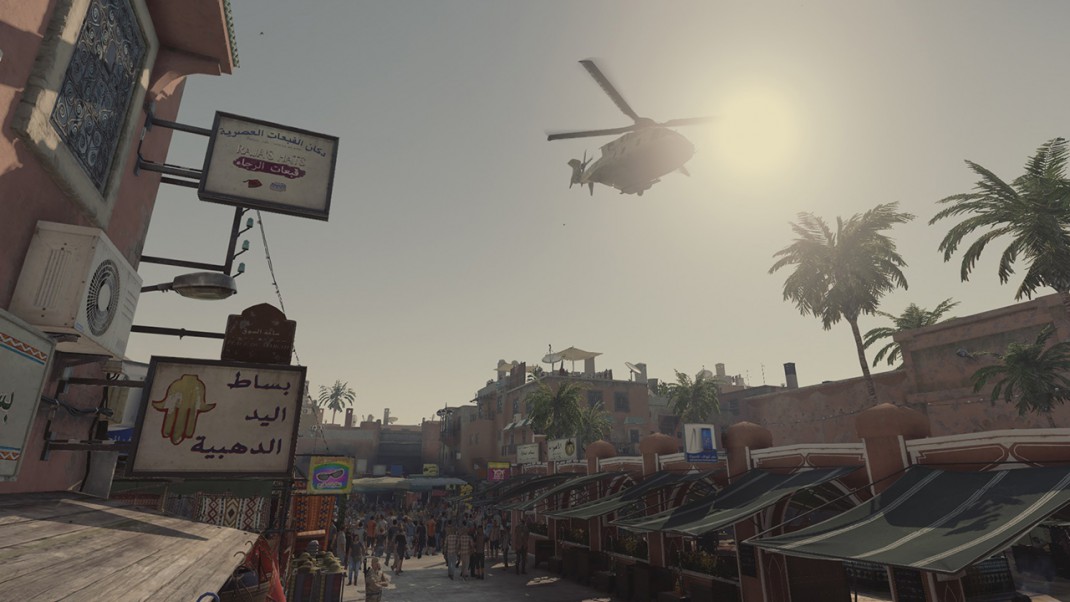 “Enter a world of assassination”. That’s the tagline for the long-awaited and much-delayed Hitman reboot. A tagline very worthy of its claim. This is definitely what Hitman fans have been waiting for and this world is one you can definitely find yourself lost in.

Admittedly, I was not a fan of 2012’s Hitman Absolution, the fifth Hitman title which turned the contract style stealth series into an almost linear, story-driven campaign that could have been any other title. But a Hitman game it was not.

The brand new title in the series, simply called Hitman, is an incredibly well done game that definitely calls back to the “Contracts / Blood Money” days of Hitman, when the game was all about replayability and how many different fashions you could eliminate targets as the suit-and-tie clad Agent 47.

Hitman is being released in monthly installments from release date March 11th until the end of the year and its first season opens with a prologue, taking us back 20 years in the past to Agent 47’s training. Diana Burnwood welcomes 47 onto the hidden training site high up in snow-clad mountains and goes over the details of what he’ll be expecting. You can expect her along for the ride once again as 47’s handler.

The cinematic cut scenes which introduce 47, as well as throughout the rest of the first season are amazingly detailed and incredible to watch. With seasonal increments, they will definitely need to be re-watched throughout the year as new contracts are released to keep you up to date with the storyline but they are very easily accessible in the main menu where you can replay any cinematics or past contracts with the simple scroll down the story timeline.

The first gameplay is the guided training tutorial, taking you onto a large yacht, which is clearly built deep within what looks to be an old missle silo to mock a full training exercise in taking out a target. Complete with a fake sky backdrop and a built-to-scale cardboard model of a helicopter, the attention to detail is incredible and almost comical at times when you stop and look around and think “Ha, they really did think of everything” when the developers created the scene. Full of actors, the yacht and dock grounds, along with the weapons, are simulated so 47 can take full control of his surroundings. 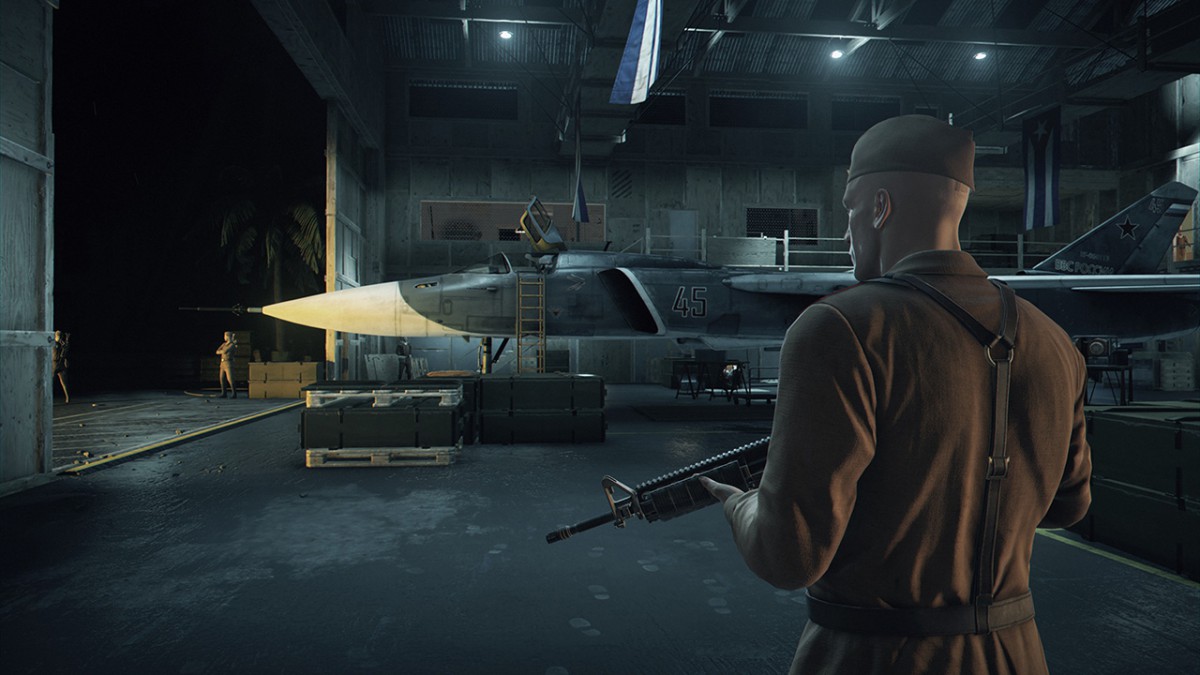 One thing IO Interactive promised when creating the new Hitman was maps of immense size, vastly overtaking past title maps which have included traversing crowds at Mardi Gras, plotting through a Las Vegas hotel and casino, and sneaking into The White House. The yacht is definitely a small map, but don’t get concerned with that. This is after all just training.

After you run through the guided tutorial, you’re brought back to the main start point of the yacht contract with free-reign to get inside and eliminate your target as you deem fit. You are also given multiple achievements to attempt which uncover the multitude of ways to perform the contract, showing the vast scope of detail on even just this small map.

The final test is next, taking you to another mock up, this time of an airplane hangar. This mission, set during the timeline of the cold war, requires 47 to sneak inside and eliminate a single target who is under heavy guard. Once again, the set design is fantastic, showing detail in the plywood built set within the same missle silo the yacht was constructed. This map is about 50% larger than the yacht map so there’s more options leading to contract elimination.

Since some of you may have played the Beta, you may have recognized these as what you played during that time. So yes, it is a bit of a pain in the ass to have to play these missions AGAIN but you do earn console achievements in doing so so it’s worth the time.

Next comes the main course of season one: The Showstopper. This contract centers around a fashion show in Paris. Your mission is to eliminate Viktor Novikov, the fashion mogul holding the show, and his partner-in-crime Dahlia Margolis, an ex-super model who saw much more profitability in the world of black market deals. Margolis is currently holding an illegal, multi-million dollar auction of government secrets to the highest bidders on the grounds while Novikov glad-hands his admirers and discusses shady business dealings with a few specific show guests around the grounds of a huge mansion.

The Showstopper map is, by far, the biggest Hitman map I have ever seen. It’s incredible how huge the map is and if you really don’t take your time and go searching, there’s no way you’ll see everything. Even going to the edge of the map at some points and looking out past iron gates shows a normal public street, complete with parked cars and pedestrians. It is absolutely incredible and you get the feeling that the cause of delays in bringing Hitman back may have been because IO really wanted to make this something special. But that’s the whole point, here. With the incredible variety that the Paris mission brings to the table, you’ll be playing this over and over if you are truly as big a Hitman fan as I am. It’s almost like a dungeon crawler with the laundry list of ways to complete your mission.

Now there in lies the rub. If you’re not a massive fan of past Hitman titles, and I mean a big enough fan where you went back and constantly played missions over and over just to see the variety, this might not be where you want to board the Hitman train just yet. The seasonal releases may grow tiresome on the gamer who may be looking for an immediate, long-term challenge. It does seem rather obvious that IO knew they had an incomplete game which is why they decided to switch to a seasonal release instead of trying to ship out an incomplete game. While I absolutely applaud them for taking that hard road, it may sting to those who don’t want to wait month to month for new contracts to be released. Sure there are other contracts than just the main Novikov/Margolis storyline that come with The Showstopper but they aren’t as intense. And the January 2017 release date of the full game may be too far away for someone to have to wait for their complete new Hitman game if you enjoyed the gameplay but aren’t a “repeat customer”. 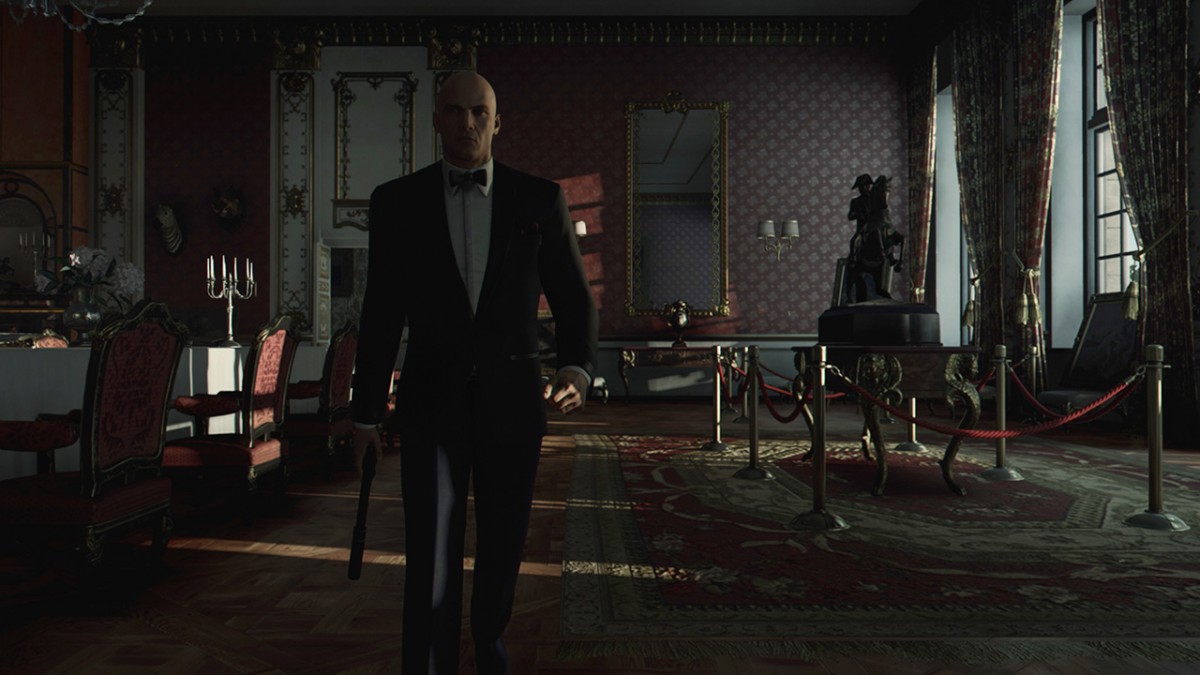 Still, The Showstopper mission in Paris shows HUGE promise for those Hitman fans who walked away from Absolution displeased. Not all who wander are lost, though. For those Absolution fans, Instinct mode is back but used in a way to identify targets, non-targets, and objects of interest (the latter of which are EVERYWHERE so you cant always rely on Instinct to point out that glowing item you’ve been hunting for all over).

I am very happy with where this is going and can not wait for the next contracts to drop over the season. Season one shows that this was a Hitman game created by Hitman fans as it shows IO listened to its customers. One thing I’m hoping will be included in future contracts are competing assassins on the same contract, much like the Black Widow in “You Better Watch Out…” or the Red Priest in “A Dance With The Devil”, both missions in Hitman: Blood Money. I still have yet to see if any innocent bystanders kick into hero mode by picking up weapons and firing rounds off at 47 but I’m almost about ready to simply walk in the front door with a fully automatic weapon and see how well that goes.

This is the Hitman game I truly believe fans have wanted since Blood Money and though the seasonal release date is kind of a drag, the incredible size of The Showstopper has me thinking about the mission even when I’m not playing and I can not wait to see what the extra time allowed to IO over the course of this year will bring. If the seasons go on and the contracts are just as immersive with maps that are so massive they become puzzles, I am down for the long haul and can not wait to see what IO has in store as the year progresses.