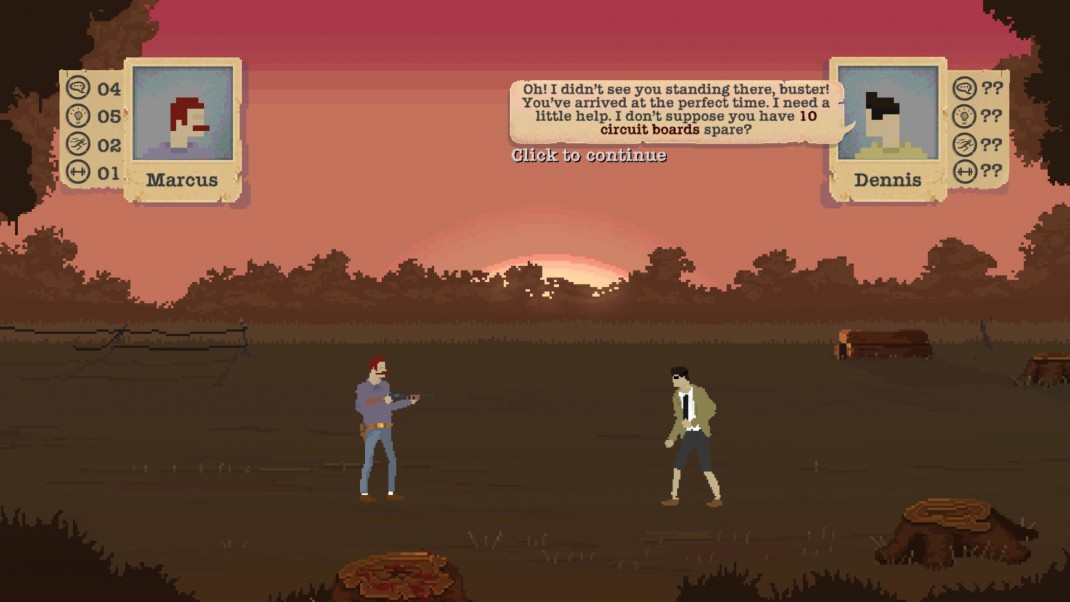 Sheltered – A Review (Xbox One)

Ah, how it’s good to be back in the saddle again.  With my life becoming a little more stable, I get to celebrate with a game review.  So, here is my review of Sheltered for the Xbox One by Unicube and Team 17 Software.  Sheltered began life as a Kickstarter game, gathering over 3,300 backers and making just over $42,000.  Originally only slated for a PC release, Sheltered hit the stretch goals, allowing the game to be ported over to the PS4 and the Xbox One.  Let’s delve deeper into this game to see if it’s worth your time, or just another bad Kickstarter game.

Your family of four has survived the nightmare of a nuclear holocaust, and now must face the future together in a underground bomb shelter.  Each day, you will have to make many decisions that could either lead your family to live another day, or perish within an instant.  As stories go, Sheltered does lean to the “bare bones” side of writing styles.  You begin the game with four individuals and a family pet, living inside the bomb shelter.  You are then told to survive as long as you can, and that’s it.  The story is made to be inherent, as the game progresses you are telling your own story by how you react to adversity or how you set up your shelter.  There will be events that occur, but nothing that truly defines a story line as such. 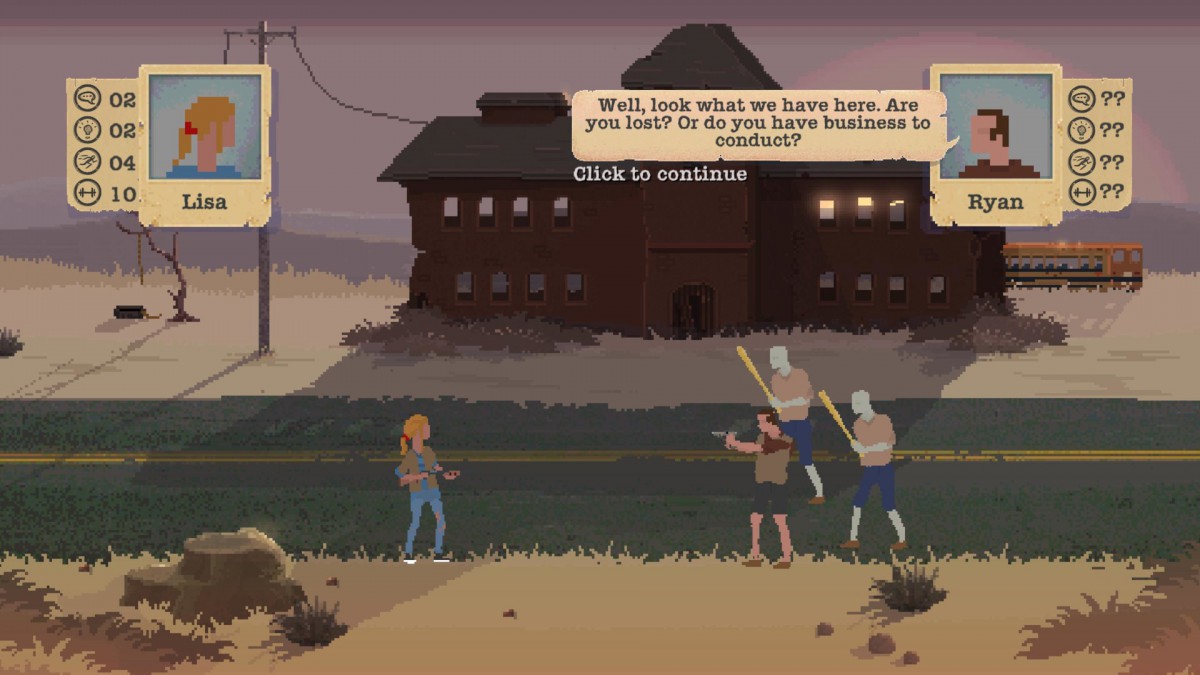 Now, this way of story telling isn’t all bad, don’t get me wrong.  Some of the best games just don’t have any stories built into them and it is up to you to define what your story is.  Sheltered takes the same path as The Sims, you are in charge of the family, and what you do defines your story.  While I personally love to have a driving narrative with much more of a goal then to just survive, this method works in Sheltered.  I wouldn’t know how to incorporate a driving narrative in this style of game, so I believe this was the right choice by Unicube.

Unicube allows you to design the four people and pet you begin the game with.  You can create any combination of four people to make up your family.  This includes sex, clothing styles, hair, facial features, and skin color.  This level of customization really allows you to invest into your starting family.

From there, you have to keep them alive.  There is a brief tutorial that shows you how things work, but other than that the game play is very much trial and error.  As your characters live their lives, they will require certain things.  Food, water, sleep, and air are just some of the things you will need to be concerned with.  Sanity and fun are also important to handle as well.  You will also have to maintain the items in your shelter, and create new ones to better help your family live better lives.  Your children are not just idle passengers in this game either, send them topside to fix the water filtration unit, get them to work making sleeping bags, or have them maintain the generator.  Child labor is alive and well in Sheltered!

As the game progresses, if you are maintaining your family’s health, they will get better at what they do.  Members can become faster, stronger, and heartier if they live a good, clean life.  This will help out as you send your members topside to explore and gather resources.  You can’t send them out without weapons, though.  Sheltered offers up a strong crafting system that allows you to create various weapons to keep your members alive, as well as create items that will make their lives nicer.  Eventually, you may be able to create a vehicle to really explore the world above.

Through game play, your family will eventually meet other survivors.  These survivors may be friendly to your family, or might just see you as easy targets.  Combat is turn based in Sheltered, which works out quite well.  You can also recruit some of the friendlier folk you meet, and have them join your bunker.  This will help maintain your bunker, but may also put some strain on your resources.  Another mouth to feed will do that.  Well, you could just wait until someone dies and cook that person.  Sure it will cost you a little sanity, but it’s better with a full belly.

I liked the game play mechanics and feel that Sheltered does a great job in handling these items all at once.  My issues with Sheltered steam from the aesthetics that affect game play (more on that later) and the utter lack of any clue as to what I am doing at first.  This style of game play does make it feel like you really are trying to survive in a post-apocalyptic world, but it may frustrate some gamers out there. 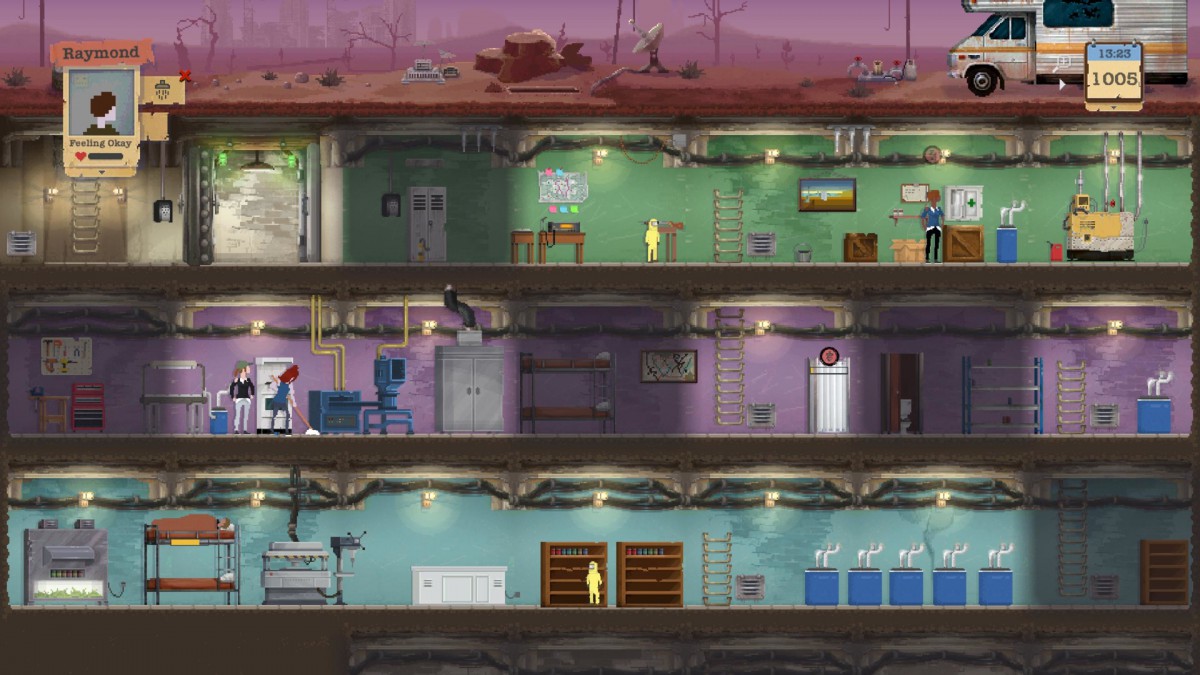 This is where the game takes a big hit form me, the aesthetics department.  Unicube went the route of using bit style graphics, so everything looks blocky and it is more then hard to tell certain items from each other.  I could not find my dog’s dish for the life of me during my first run through.  Sure, Sheltered was developed on a budget and, sure, graphics don’t make the game but I do wish things were much clearer then they are.  I have never been a proponent of making everything look realistic and shiny, but I do wish developers would stop going back to really blocky bit graphics just to save some money.  Other than that, the aesthetics works fine, and it really comes down to your own personal feeling about developers using retro graphics these days.

Sheltered is a solid, post-apocalyptic survival game for the Xbox One that does a great job in making you feel like you are trapped in a shelter and that your life could end at any moment.  This game will really speak to the micro manager in you, and especially if you ever enjoyed any of The Sims games.  The crafting system is solid and deep, the game is full of atmosphere and the amount of customization will allow you to create the family of your dreams.  I did have trouble with the aesthetics of the game, mainly in just telling items apart from each other.  Sheltered will also not hold your hand at all, you are expected to handle stuff on your own, right away.  If you are looking for a post-apocalyptic human management game, I really think Sheltered is the best of the bunch for the Xbox One and would recommend giving it a shot.  Sheltered is available now for the Xbox One.