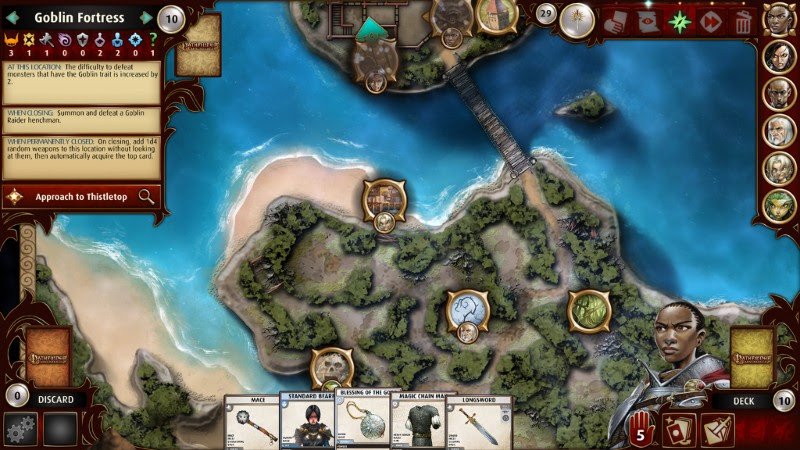 Pathfinder Adventures invites players to build a party of iconic Pathfinder heroes as they tackle the Rise of the Runelords Adventure Path. Each hero draws from their own unique deck of cards representing their powers and abilities using them to overcome obstacles, slay monsters and ultimately defeat the sinister villains of each adventure. Success depends on matching the right champion to the right challenge, pairing your party members’ powers together, and playing your cards wisely.

Heroes level up with each adventure, gaining new abilities, and building out their inventory of powerful spells, weapons and companions. No adventure plays the same way twice letting both solo players and multiplayer groups return to Pathfinder Adventures again and again for completely new experiences. Obsidian is also dedicated to supporting Pathfinder Adventures with the regular release of new adventure decks for purchase that will take the Rise of the Runelords Adventure Path to its climactic final encounter.

“Obsidian has a history of working with deep, richly-textured fantasy worlds, from Star Wars to Fallout. We’re thrilled to play in Paizo’s sandbox and adapt it for both the fan of the tabletop game and a brand new audience of digital gamers,” said CEO Feargus Urquhart. “It’s fitting that we will start with the first Pathfinder adventure ever written, the classic and well-loved Rise of the Runelords.”

Pathfinder Adventures will initially launch as a single-player or pass-and-play experience with online multiplayer support being added in the coming months. The game will be available to download for free on March 29 and includes a tutorial as well as the adventure, Perils of the Lost Coast.  Additional adventure decks will be available for purchase at launch, and regular intervals thereafter.