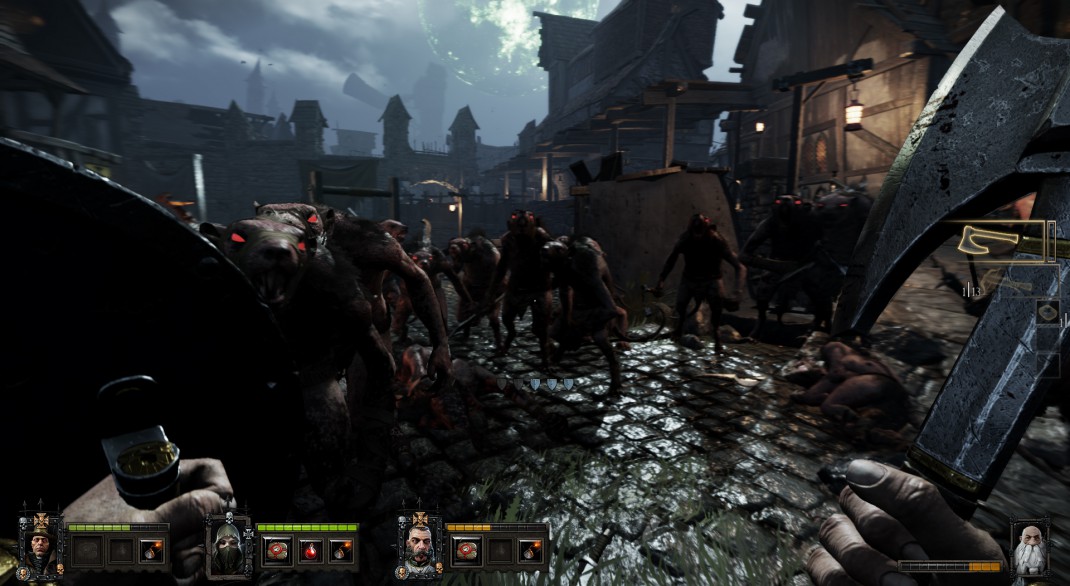 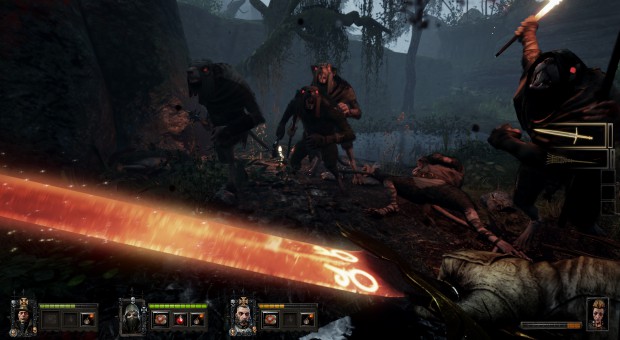 Rats! I mean like a tide of vermin! It’s the end of the world… of Warhammer and there are a lot of rat bastards to deal with in these final days. So grab three friends, or bots if you don’t have any friends, and take to fighting the good fight one last time in Warhammer: End Times – Vermintide! 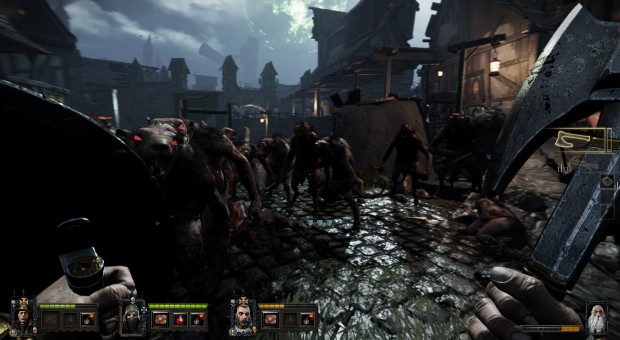 Hands On:
First off, all the features above that were listed on the Steam site were solidly in effect when I played. When it came to character building and armaments, there are tons of options and more arrive throughout play with teamwork being an integral role. If you don’t stick together and watch each others’ backs, then there is a good chance you can get dragged off like a raccoon by animal control – a loop around your neck while other rats take shots at you. At one point during an AI-partnered match I got ahead of my AI team and when they tried to catch up with me we wiped and it was mission over. It was all nicely accentuated by a “Defeated” screen to rub a little salt in our wounds. It wasn’t for a lacking in AI building either, the bots are solidly designed and, mostly, behave like real humans. The biggest weakness I saw in this was when to take healing potions. If a bot is at 60% health and comes across a healing flask they wouldn’t top off instead passing on healing and only using the flask at dire times. Though character AIs quip and fight differently they apparently all have a slight weakness when it comes to self preservation which is a weakness the group then suffers from. Part of this is because the behavior built into the enemy AIs is so well done. They run at you in packs but the stronger ones that benefit from distance will run off if it suits their purpose. Sometimes, the rats will stop attacking and retreat to gather forces. They then re-advance with strength in numbers. When you hear one of your team say “It’s a trap!” and you turn and see a flood or I guess you would say a tide of rat-men pouring over a wall at you, it can be a bit daunting. 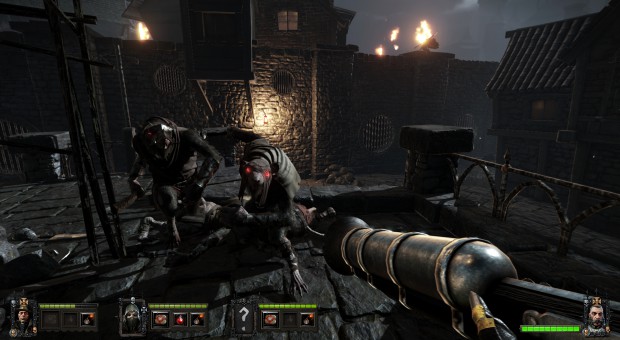 I have talked a lot about the AI of both the rat-men and the fellow teammates because I am one of the folks above who don’t have any friends playing the game. As a result I have dropped into hosted games or tried to host my own with some rather rough results. The game requires a team, whether that consists of real players, AI or both seems to depend a bit on luck and timing. The success of that group seems even more in the balance. For example I entered a game and had my graphics cranked so it looked beautiful but the player hosting the game kicked me, my guess was for a lag issue. I lowered the graphics settings and got in another game where the host was complaining about players running off ahead to getting the loot dice and leaving others behind and then quitting. I entered another game where there were two real players and two bots and, since no one else joined, the host cancelled the mission. I then went and started a game myself hosting in hope that, with a stable host, the game would be more successful. It was in a sense, no one else joined and using the bots I was pretty successful and a lot less stressed about the mission possibly ending or someone shooting off ahead for the loot dice. At that point though I realized I could just start a private game and no one else would be able to join and I could just run with the bots who wouldn’t bring personal player issues to the game. This also made me realize it might as well be offline play then since I was a solo party with bots.

I wish I could say I had one stellar mission with other players but I’m not sure I ever completed one. Maybe if it had dedicated servers that the games were being hosted on like in Diablo it would be a more stable online experience and less dependent on the numbers of players and dispositions of them. The game is solidly built with tons of great features that lead to detailed customization and lots of Warhammer lore, the only problem is a lack of player base and possibly it’s quality.

Last Tide:
Warhammer: End Times – Vermintide is a solidly built game with great features and excellent AI. It is a visually beautiful game that deserves an equally terrific player base. Not just deserves it though, requires it for the game to continue on its hairy rat legs.