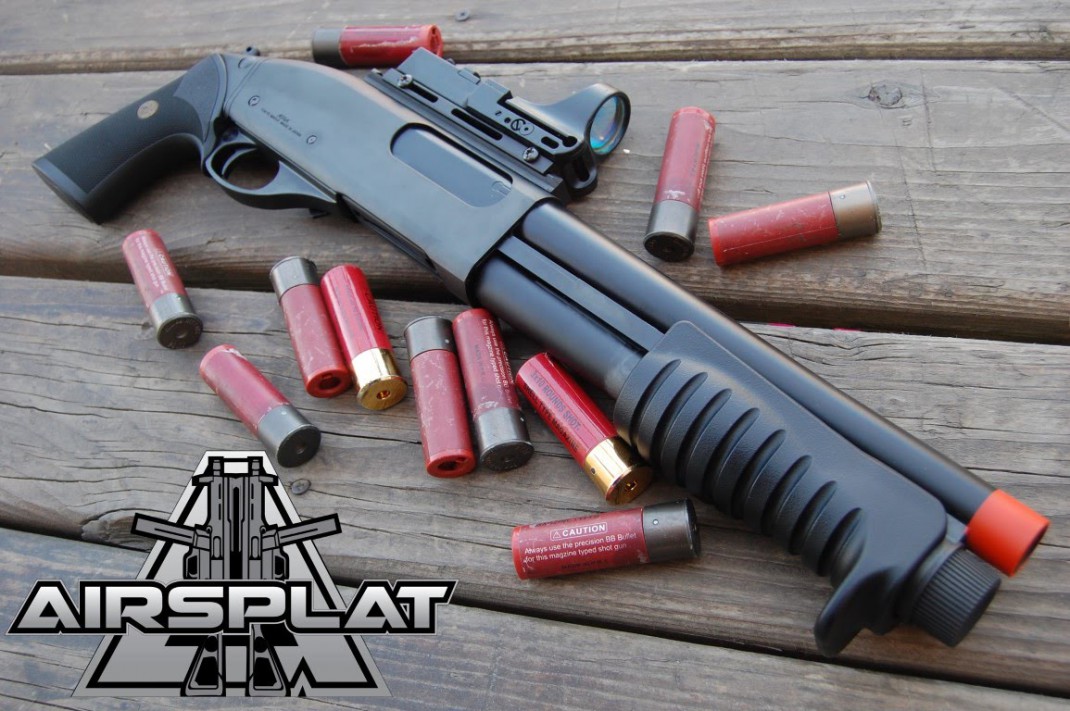 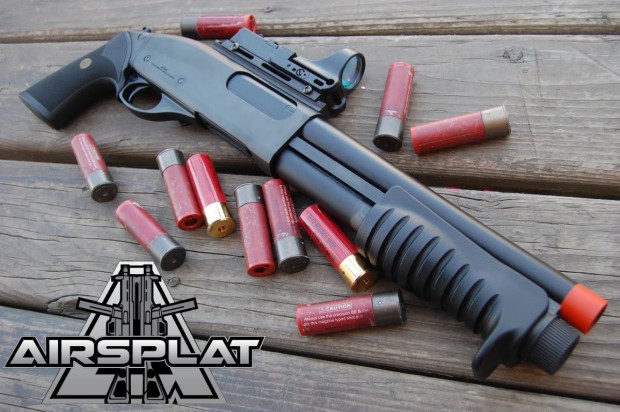 Tokyo Marui, a company long-known for not only inventing the airsoft gun but, also, bringing unrivaled quality to their work, has brought its M870 Breacher airsoft shotgun to the US. AirSplat, long-time friend of our site, let us borrow one for a spell so we could get blasting with a modern-day “street howitzer”. This is the small brother to the full size Tokyo Marui M870 airsoft shotgun, albeit with a few important changes.

Of course, the biggest difference between the two airsoft shotguns is the overall length and stock modification. The breacher variant of the M870 measures only 35 inches in length! I was worried that this small size would mean it would be fragile. Afterall, Tokyo Marui is known to use a lot of plastic in their airsoft guns. I was pleasantly surprised to find that there is actually a decent amount of metal and plastic in this airsoft shotgun. The forend and furniture are plastic while the barrel and other important bits are metal. It weighs a beefy five pounds and provides a strong, pistol style grip for the shooter to hold on to. Within this pistol grip lies the gas tank for the airsoft gun – a small, magazine-like gas tank. This is in contrast to the large stock tank found on the full size M870. Thankfully, despite its smaller size it holds a very decent amount of gas and I was able to get anywhere between 50 and 60 shots from it before having to refill it. As each airsoft shotgun shell (one is included in the box) contains 30 BBs (each shot fires 3), you will have to reload after you go through 5 or 6 shells. 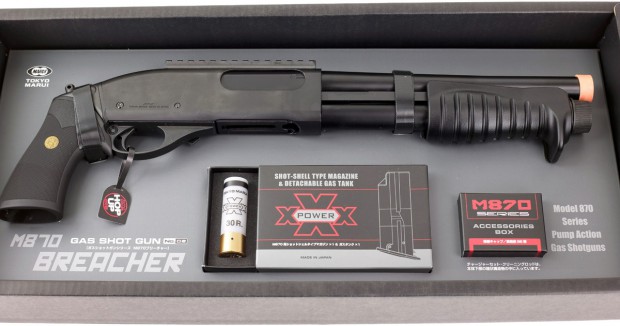 Speaking of shells, the Tokyo Marui M870 Breacher airsoft shotgun uses the standard multi-shot compatible versions that you can find for dirt-cheap online – so that is a nice little savings! The shells are also available in a multitude of color variations if you need to denote some specific tactical purpose in your gameplay. Of course, you can also get some actual Tokyo Marui airsoft shotgun shells if you want the best…

One of the most unique things about the Tokyo Marui M870 Breacher airsoft shotgun is its multi-shot capability. In its default configuration, one pump of the shotgun’s forend loads one BB into its three inner barrels. However, with the flick of a switch hidden in the ejection port, one pump of the forend will load two BBs into the three inner barrels, making for a six BB burst per trigger pull! Of course, loading two BBs per barrel does decrease the FPS slightly, but nothing too noticeable if you are playing in CQB fields like Tac City Airsoft here in Southern California.

Playing airsoft with the Tokyo Marui M870 Breacher airsoft shotgun is, no pun intended, an absolute blast. It is so small that it maneuvers around corners easily and its top rail allows for a reflex sight to be added with no issue (see the promo image for this article above). Additionally, there is a great tactile response in using the airsoft shotgun. The sound and feel of racking the forend back before firing your next shot hearkens to pretty much every action movie ever made – only, this time, YOU are the star instead of some actor. Even the sound of this airsoft shotgun is nice and loud, something I was not prepared to hear while using it. 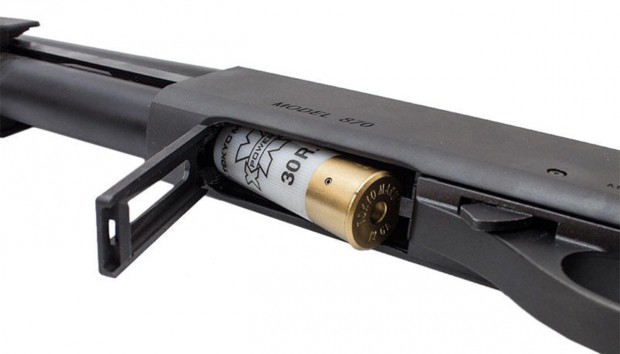 I highly recommend getting an optic of some kind mounted onto the M870 Breacher’s top rail. Without any iron sights to speak of, it is nice to have a central aimpoint to line up your cone of fire. With three fixed hop up units (one per inner barrel), I was surprised to find out that the airsoft gun has some serious accuracy. Get a dialed-in optic on it and you will have a distinct advantage over those more traditional AEGs on the field. Also, you will definitely need to buy some additional shells for this airsoft shotgun as each shell only holds 10 (or 5) shots depending on your fire mode. I recommend the M870 shell holder add-on as it provides a convenient place to store extra shells without needing to put another pouch on your airsoft belt or chest rig. Additionally, if you want to add an M4 style stock to your M870 Breacher, Angry Gun makes a modification called the Angry Gun Retractable Tank Stock for TM870. This uses the entire stock as the gas tank instead of the included, smaller magazine. Be warned, however, that the modification costs about $200 dollars.

Overall, Tokyo Marui’s M870 Breacher airsoft shotgun is a terrific close quarters airsoft game option. At three or six BBs per trigger pull, you will send a lot of plastic hurling towards opposing players and have a great time doing it. The Tokyo Marui M870 Breacher airsoft shotgun retails for $329 over at AirSplat’s official website. It is available now!