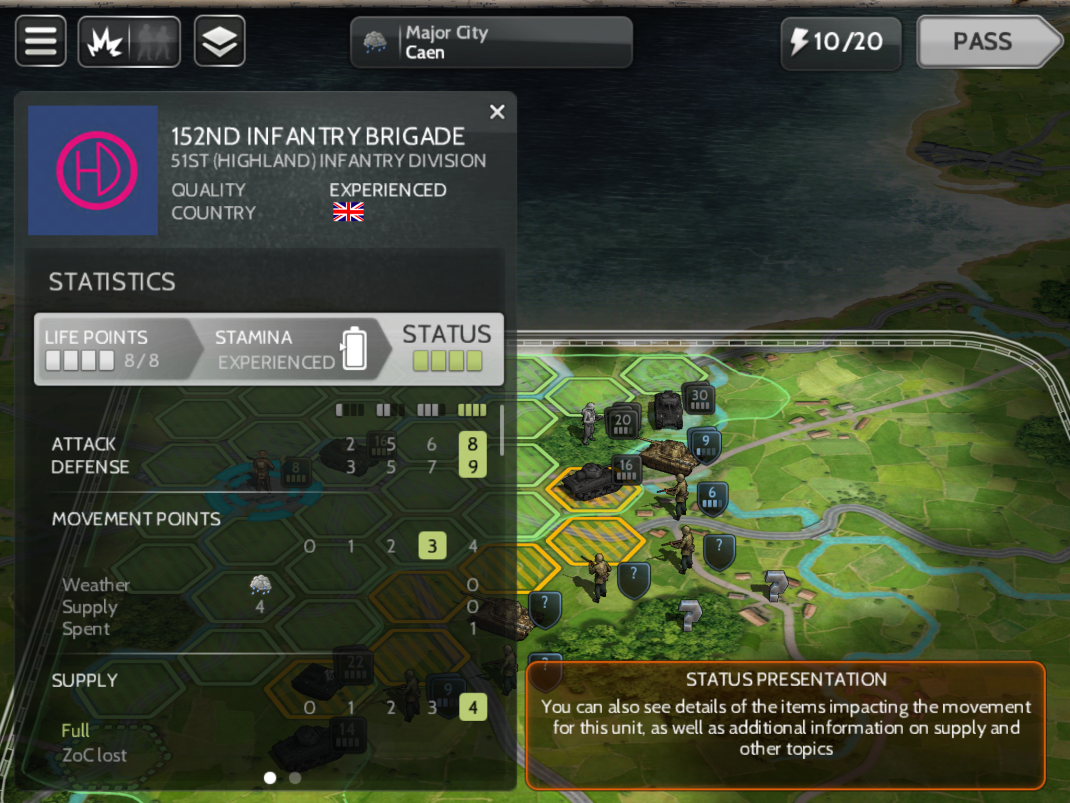 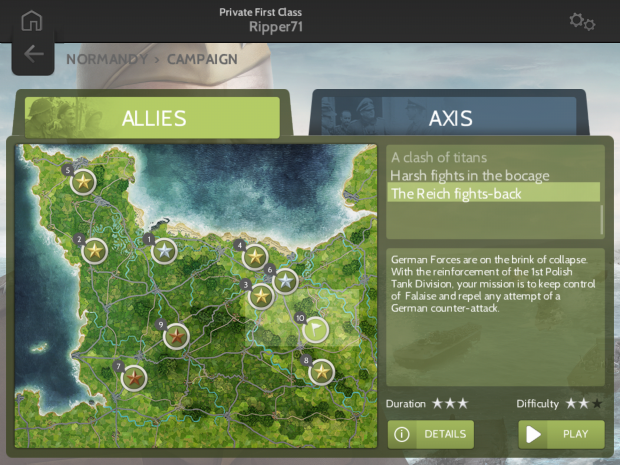 It seems somewhat fitting that just after the fifth anniversary of writing my first article for GamingShogun.com, which was about a budget Risk like game on the iOS platform, that I am once again writing about a budget Risk style strategy game for the iPad this time titled Wars And Battles.

Description:
Wars and Battles is a platform of turn-based wargames that simulate historical battles and campaigns over several centuries and continents. Wars and Battles offers you rich and immersive graphics, intuitive yet sophisticated gameplay and hours and hours of game. Integrating the sophistication of traditional wargames into tablets is our commitment to players fond of strategy, history or the military.

By buying the Wars and Battles app you will be able to play the campaign in each of the 4 battles in the package. This represents more than 50 original scenarios, of which there are more than 30 for Normandy 1944 and October War 1973 alone. Advanced scenarios and full battles (including “what-if” scenarios) are available through in-app purchases, so the fun never ends! 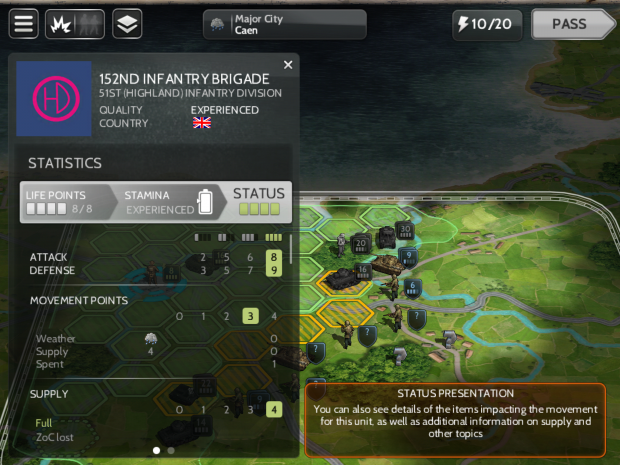 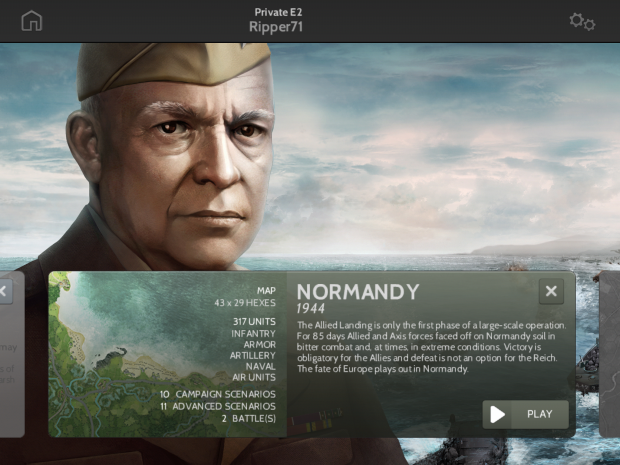 Game On:
Wars and Battles promises lots of wars and battles to come but starts you off with two side of two different campaigns: Normandy 1944 and October War 1973. At its core, the game is a hexagonal turn-based strategy title with nice visuals. Also, the game can be toggled between 2D or 3D viewpoints. The 2D mode has a classic feel while the 3D one has some animations. There are turn limits and each limit is dependent upon the scenario being played. For example, you might have just 7 turns to take three cities. Resources are distributed at the game’s discretion, so you can’t plan on reinforcements – only hope for them! The game starts you with Normandy 1944 on the Allies side, though you can play the Axis missions at anytime. The campaign missions for October War are also available from the start so you can play an unusual set for strategy games the Israelis or The Arab Coalition. This was kind of a nice touch because I’m an amateur war historian concentrating on WWII and more recent American-involved conflicts, so there is a bit to be learned about borders, battles, and terrain for those not familiar with them. Future maps such as Korea and Vietnam are a little more in my area of expertise.

You can play the game in both multiplayer mode or against the AI. The AI starts off a little easy and your units are somewhat plentiful but, by the end of the Allied campaign, you aren’t hoping so much for a resounding victory as much as a marginal one. The AI gets downright brutal and supplies dwindle to near nothing as the Axis seem to build tanks from the trees. The Axis campaigns are even harder giving any true strategy player a great challenge and any casual player a reason to go back and play the lower missions again. That is the nice thing about strategy games, missions usually have a high replay value and they never are the same match twice, especially ones like this where during each attack the game rolls virtual dice just like in Risk so you can see why a battle came out the way it did. 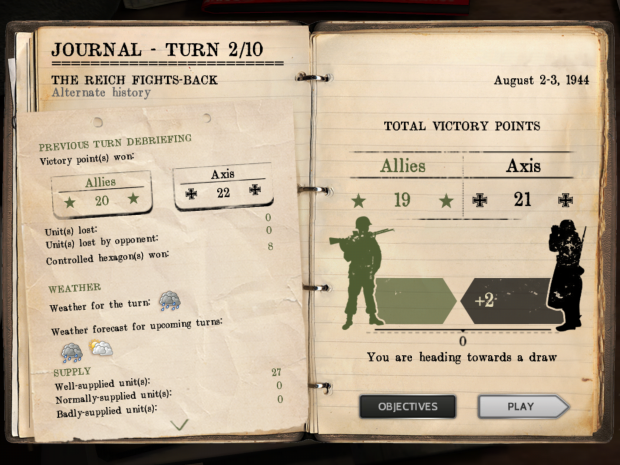 It’s also important to familiarize yourself with the strengths and weaknesses of your units. Most will match up to each other fairly one to one but then you have artillery that has ranged attack and certain vehicles that can cross map spaces with fewer restrictions. Don’t assume because you have 20 tank units against 20 infantry you are going to win, even a two to one ratio of attack if the enemy is defending better terrain could spell disaster. I had 42 tanks, 18 infantry, and a General bonus and still took triple the damage that I inflicted on the 18 tanks I was attacking in a city.

Multiplayer allows for you to create a game, join a game someone else has created and play a turn in your started games when you have a chance so you aren’t required to play through a whole game immediately almost making it more like a casual game of chess played long distance.

The game would be a near perfect example of a solid portable strategy game except for a pricing issue. The campaign scenarios for Normandy 1944 and October War 1973 are included in the $6.99 game price but if you want to play the advanced scenarios or the two battles for each of these maps it cost $9.99 each. That means to play the full levels of the game on the current two maps it winds up costing you $26.97. Hopefully basic scenarios will be free for the new maps that arrive making the $6.99 value even better but if the beginning is any example it is going to cost the player an extra $9.99 every time a new map pops up if they want the full experience… with five more maps planned (additional $49.95, total $76.92). That is getting into the collector’s edition pricing for a next-gen console game. 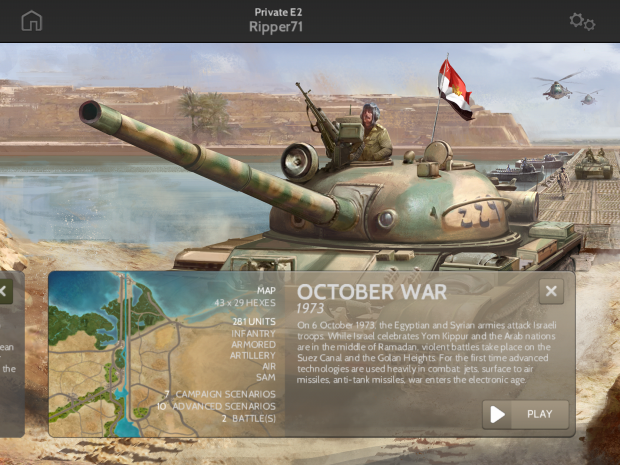 Last Shot:
Wars and Battles is a fun, affordable (in its base configuration) strategy game great for on-the-go play. The AI is solid, sometimes bordering on brutal, and the game’s maps and scenarios are well designed. I wish I could have tried out the advanced scenarios and battles but the pricing would be cost prohibitive. If I ever get a chance to try them I’ll let you know how they are, for now I see myself revisiting the maps and scenarios I can play and looking forward to new ones to come.