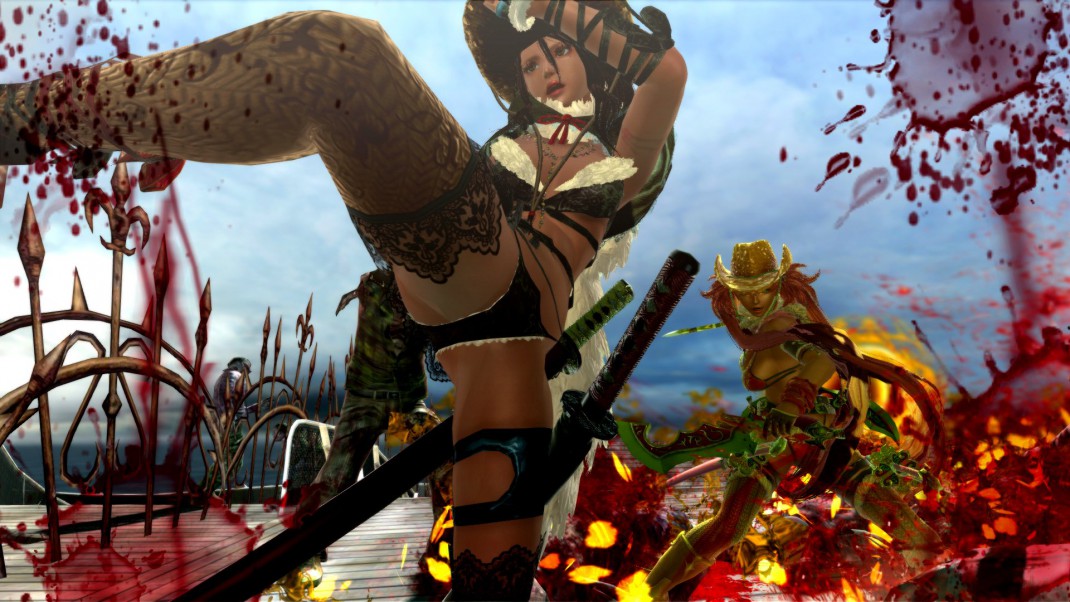 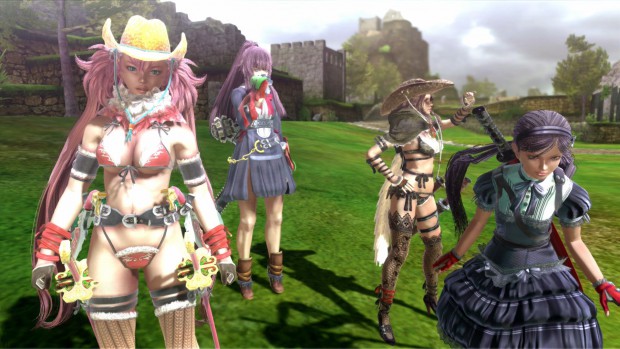 When I was asked if I wanted to review Onechanbara Z2: Chaos, a game about scantily-clad women killing zombies, I was wondering if they had designed this game just for me and if our Editor-in-Chief really needed to ask if I wanted to play. That probably sounds sexist at face value but one of my favorite and most overlooked games of recent years when it comes to zombiefests is Lollipop Chainsaw. While its characters were wearing little costumes and wielding big weapons it didn’t take long to realize that it was a satire about female characters in video games and they made sure to back it up with nice graphics and great game mechanics. It was with these hopes of similar results that I went into Onechanbara Z2: Chaos.

Description:
Onechanbara Z2: Chaos is the latest iteration in the Onechanbara series featuring the world’s sexiest zombie slayers. With two sets of buxom vampire sisters at the player’s disposal, over a dozen stages of high-octane real-time swordplay await, each characterized by the hordes of zombies infesting the land and the over-the-top methods our heroes employ to kill them. Fight off the invasion in gruesome detail, sending limbs and blood flying every which way through a variety of physical attacks and acrobatic maneuvers, occasionally transforming into a demon for short bursts of added power and speed at the cost of life energy. Each of the four members of the so-called “bikini zombie squad” has her own unique abilities, and skillful play is rewarded with orbs that can be exchanged for upgraded weapons and outfits. 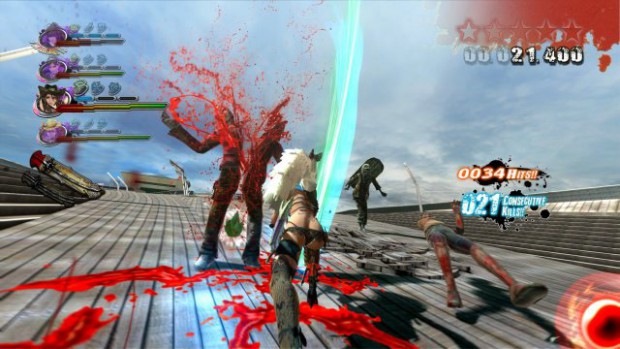 Features:
– Zombie-Slaying Action has Never Looked So Good! The bikini samurai squad of Onechanbara return armed with a plethora of new moves and new Dare Drive or Xtasy demonic transformations for short bursts of intense power.

– Four Lovely Ladies, Four Unique Playing Styles. Each of the playable ladies has her own unique weapons and abilities, and players may tag-team among them on the fly or even perform team combos.

– Tons of Customization and Replay Options. In addition to the series’ most involved storyline to date, Mission Mode provides specific challenges to complete, while skilled gameplay will unlock Yellow Orbs which can be exchanged for new gear and outfits to help earn a top spot in the online leaderboards.

– A Suave, Stylish Soundtrack Supported by Dual-Language Voice-Acting. In addition to the funkiest, catchiest and most outlandish soundtrack the franchise has ever known, players may also choose whether to enjoy the gameplay experience with the original Japanese voices or – for the first time in series history – a full English dub. 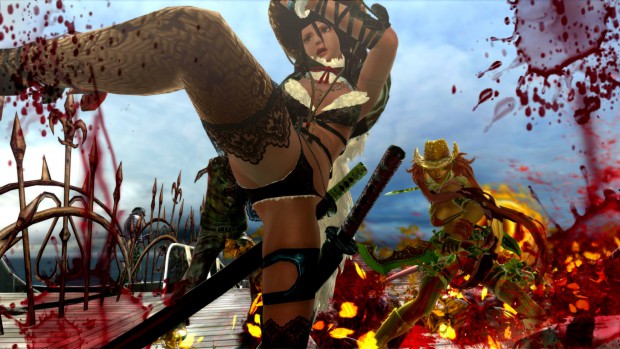 Hands On:
First things first, this game is satire from the way characters are dressed to the reason they are dressed that way. The characters are designed to be over-the-top just like the comvat moves and combos and, except when reading about the characters or watching cutscenes, their outfits and exaggerated body images play no part in the game to the point you forget about them until you unlock new costume parts through achievements. The amount of cool, weird, and campy clothing and accessories you can get is pretty staggering. You can even put Voltron style armor pieces on the characters to show just how silly they are trying to be and how little they are trying to reflect true standards and ideals (just like Lollipop Chainsaw where you got to dress her as Ash from the Evil Dead movies).

Now that the buxom elephant in the room has been addressed, the question comes up about gameplay. Is Onechanbara Z2: Chaos a solid game disguised as a sexy romp? Yes, thank goodness for that but the short answer is yes – it is a ton of campy fun. There are multiple combos that can be unlocked – both simply and more complex to pull off. The moves are very gratifying to perform and their action-packed results are equally awesome to watch. What’s even cooler is that the actual effects of your combat moves get more epic as your increase your experience. For example, you might do a dash attack that simply knocks an enemy down at the beginning part of the game. However, if you keep upgrading the dash attack you will find that when it strikes that the enemy doesn’t fall down but instead flies across the screen and splats on a wall slowly, giblets slowly sliding down its surface. You feel truly satisfied when you build up an attack and look forward to seeing what it will do next. 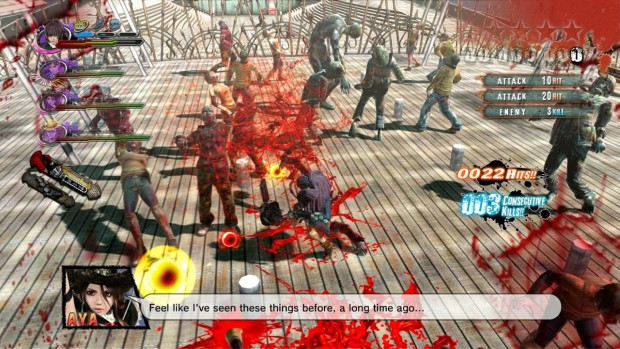 There are four characters that you play and are interchangeable at the touch of a button. This means you really have four life bars to work with at any given time and four styles of attacks. This can be crucial when you have enemies that might be more vulnerable to one kind of attack or even only vulnerable to one type (I’m looking at you bastard Mud Men!). So this brings in strategy as well as random mindless hack and slash. You may work on crowd control playing one character, switch to another to deal with specialty monsters then settle on your favorite type of character fighting style for a boss all in the same fight. This kind of planning and forethought that is required really elevates the game from a zombie chopfest to a solid, replayable fighter with lots of strategy. My only complaint about this specialization is that sometimes the timing on a combo has to be so absolutely precise to take an enemy out that it can take a REALLY long time to finally get it to work. A compliment about the controls though would have to be the use of the PS4 controller touchpad which I had quite honestly forgotten about. During some boss battles you are directed to swipe in different directions on the pad which gives a little extra tactile fun to playing (once I figured out it wanted me to use the touch pad instead of the directional sticks).

You can collect coins to buy potions, weapons, and movement upgrades as well as outfits throughout the game. Always keeping a near full health bar through health potions is an important key to survival. You don’t get enough money to unlock all you want, at least not of the first play through so you need to be selective, I found myself just upgrading the weapons on two of the characters, ones that had very different fighting styles so that I could adjust as needed during boss fights or large crowd control. Each character gets three weapons as well (melee, mid range, longer range) so upgrading all of them is that much more difficult. Once again though upgrades look satisfying as well as performing better.

If unlocking more items and getting more combos isn’t reason enough to replay the game, then there is also the fact that you get graded throughout each chapter and unlock achievements which are then compared on an online leader board as well as triggering PS4 achievements. Also, there are different levels of difficulty and challenges besides the main player campaign. This game has legs without even mentioning there are different environments set around the world and if you have favorites you can just replay them if you want. 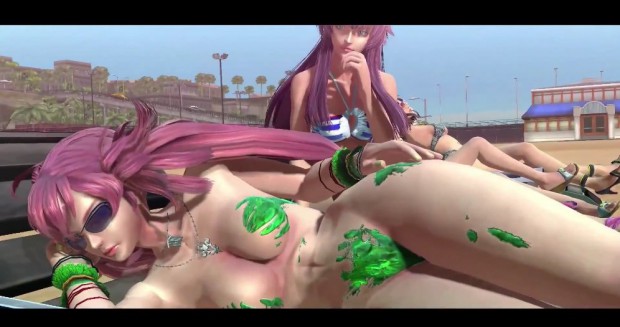 Last Thoughts:
Onechanbara Z2: Chaos is a great zombie fighting strategy game disguised as a sexist, mindless slash and hack. The dialogue and outfits are meant to be tongue-in-cheek while the action is solid, up-scaling and at times plain unforgiving. If you can get around half of the characters being dressed like lingerie models Onechanbara Z2: Chaos is everything a great fighting game should be.