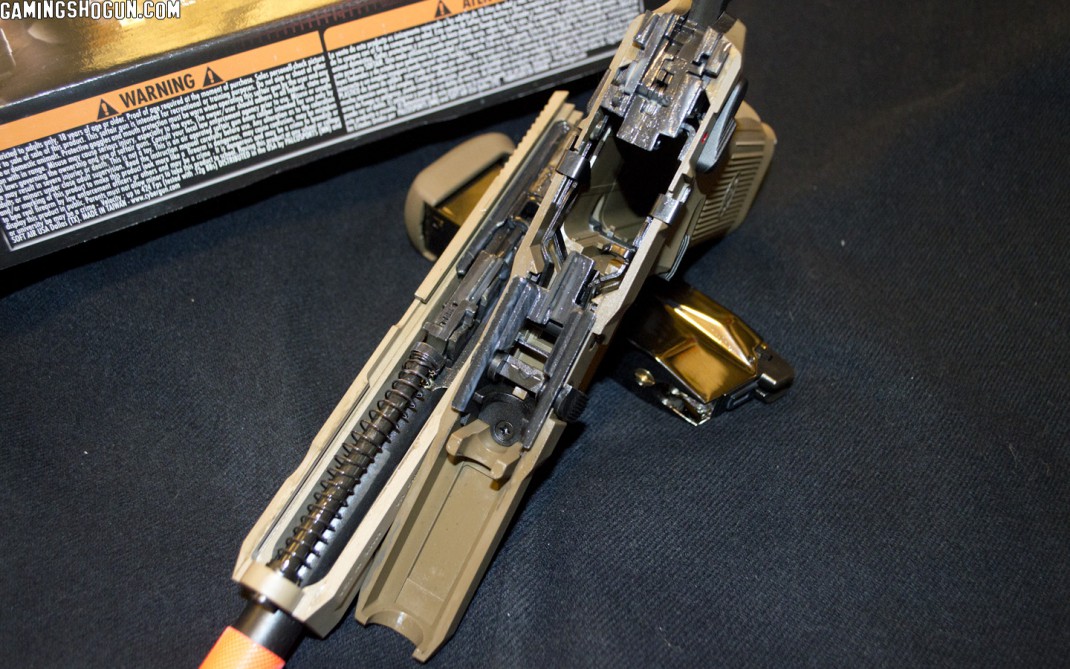 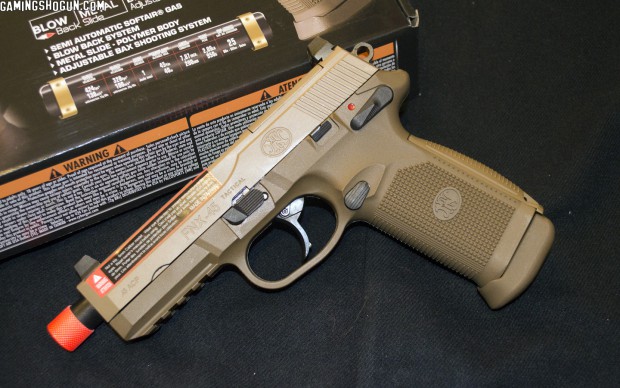 The FN Herstal FNX-45 Tactical airsoft gas blowback pistol by the folks at Cybergun is a replica of the real steel FN Herstal FNX-45 Tactical semi-automatic pistol. The pistol features a flat dark earth color scheme with a full metal slide and polycarbonate frame. In the box, you will find the FNX-45 pistol, one magazine, an extra backstrap piece, and a manual. The pistol also features an orange, threaded muzzle which allows for the addition of a suppressor as well as an under muzzle rail system for flash lights or laser units. The pistol retails for $189.99, making it on the higher end of gas blowback pistols. However, on looks alone, it is a value – but, what about internals and performance?

Internally, the FN Herstal FNX-45 Tactical airsoft gas blowback pistol is fairly standard for a modern gas blowback pistol and the various components seem very durable. All indications point to the exact manufacturer of the FNX-45 being VFC and, if this is the case, they can give themselves a pat on the back for a job well done. On the top of the slide, you will find a removable plate that allows the mounting of a micro red-dot sight – a very handy little feature not found on most airsoft pistols. Built for both right and left-handed shooters, the FNS-45 Tactical features an ambidextrous magazine release, slide release, and thumb safety. Speaking of the thumb safety, it also functions as a de-cocking lever when pressed downward.

Magazines for the FN Herstal FNX-45 Tactical airsoft gas blowback pistol cost about $40 dollars each and have a chrome exterior save for the flat dark earth base plate. Unlike most airsoft pistol magazines, these do not have a green gas fill valve on the base plate area. On these magazines, the fill valve is located on the back of the unit, near the release valve/button. Unfortunately, I am having one heck of a time trying to find an online retailer with the magazines in-stock. It seems these are a bit harder to find than most. Each magazine stores 25 BBs and I had no issues to speak of with them except for having to get used to filling them from the back instead of the base plate. I was able to fit the FNX-45 Tactical airsoft gas blowback pistol into a larger Blackhawk! holster of the canvas variety. However, I prefer kydex holsters an am having trouble finding one for this pistol model. Like the magazines, these are a big harder to come by than most airsoft pistol holsters.

I was fortunate to get the chance to play several games with the FNX-45 Tactical by Cybergun/VFC here at SC Village in Norco, CA. The pistol is a lot of fun to use and I didn’t even have to re-gas the magazine up for several full reloads. It should be noted that this is one large-framed pistol, but I had no difficulty in getting a solid grip on it once the smaller backstrap was installed. The recoil has a very nice kick to it and the iron sights are solid and accurate. Our pistol clocked in from 308 to 326 feet per second with .20g BBs, which is a great velocity window for an airsoft pistol. I played with .25g BBs and always seemed to hit what I was aiming it.

Overall, the FN Herstal FNX-45 Tactical airsoft gas blowback pistol is an excellent choice for those players looking to not only get great performance but also great looks out of their airsoft pistols. If your hands are big enough to wield this sucker into airsoft combat, then you are in for a treat! 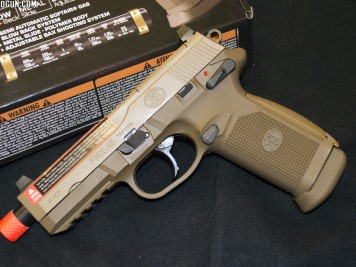 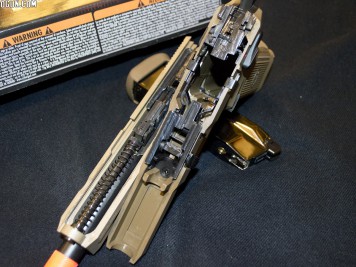 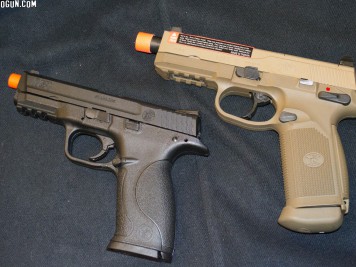