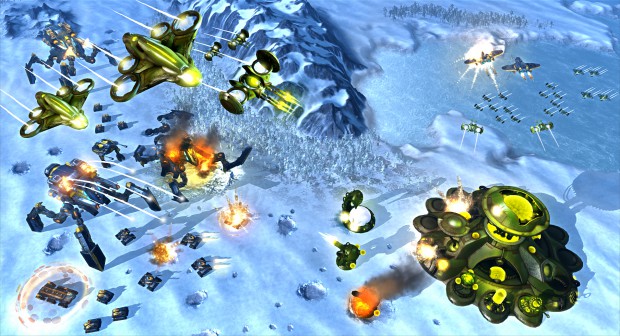 I’ve been a player of real-time strategy games since the golden days of the genre. By golden era, I mean those titans like Warcraft, Command and Conquer, and the first StarCraft. For a while, there were tons of them – each with expansions and mods and the playtime seemed eternal. Those golden days have passed so that now you have to keep your eyes open for games that will keep you coming back for more. I was lucky when I got Etherium.

Description:
Etherium is a real-time strategy game set in a science-fiction universe, where three factions battle it out for a mysterious and rare resource known as ‘Etherium’.

Manage your resources, develop your base, and take command of infantry, tanks, aircraft, and gigantic colossi of war to battle not only your foes, but weather anomalies and mysterious secondary factions in richly strategic and original RTS gameplay. In the single player Conquest mode, develop your technological capabilities and expand your colonies over the furthest sectors of space, assembling a formidable armada.

Each of the three factions have their own strengths and weaknesses, as well as different tactical command skills such as map exposure, climate control, or planetary bombardment. Define your own strategy, deciding to either fell your enemy by striking their mother-ship from the planet’s surface, or rapidly crushing their colonies. In multiplayer, team up or wage battle in all-out deathmatches with up to 4 players! 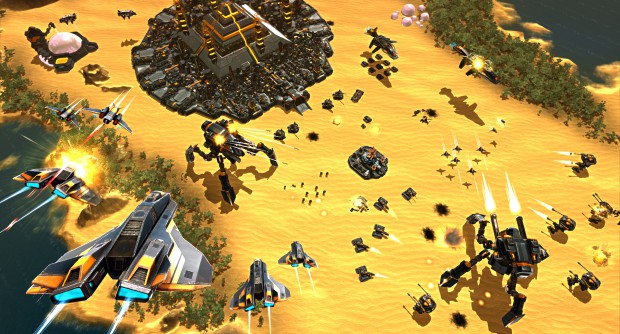 Hands On:
It doesn’t take an RTS expert, or even a big fan of the genre, to see that there are some similarities to a powerhouse RTS game already on the market. This may bother some people but as someone who has only seen that powerhouse add updates to StarCraft 2’s multiplayer maps recently (to be fair that is the game’s bread and butter via tournament play), I am quite happy to get my hands on some fresh sci-fi RTS fun in the same vein. Etherium’s three empires are quite a bit different both from each other and from those found in StarCraft 2, so each campaign feels completely fresh while only requiring the slightest adjustments to get used to the control set up.

Each side gets one main base and destroying the other team’s base is one of the main ways of winning the game. Destroying the enemy’s fleet above the surface is another method for winning. You take regions by capping a pillar with a colony or outpost and then, if it has an Etherium bubble on it, you can start mining it for money. There is a build time on structures but unit builds are almost immediate. They are considered fleet drops so they can only be dropped at locations with spaceports. Building those spaceports at colonies or outposts throughout the map can mean the difference between wining and losing the planet at hand. Turret placement can only be done within a controlled territory and the number of turrets are limited in each one so be careful positioning. There are a lot of things to consider for each faction and each map, figuring out the strengths and weaknesses is all part of the fun. 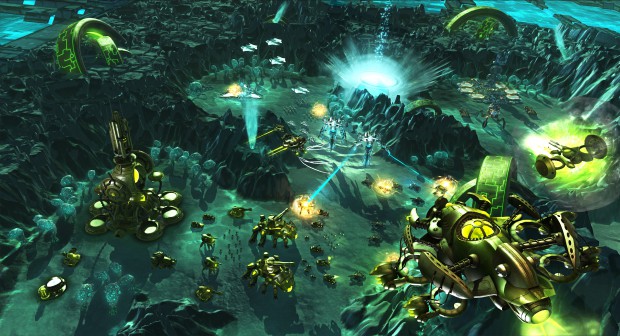 The game could definitely use more single player missions. Most folks will probably be playing the online maps and not be too concerned with this aspect but when I get frustrated with “zerging” or bad sportsmanship, I like to go back and do some single player stuff. This game has the potential for expansions or even just new single player maps for skirmishes that could really make this game have legs. Also, with new multiplayer maps, it could make Etherium a contender for ESL tournament use. The model is in place and the formula has already been proven – it just needs proper support and community.

The other drawback is a small aspect to this game that is turn-based space fighting that allows you to engage enemy fleets in space before planetary landing. It plays kind of like a mini game and does add a bit of variety to the game but didn’t really feel necessary or very engaging. If it winds up being your favorite part of the game I would recommend playing turn-based strategy rather than real time. 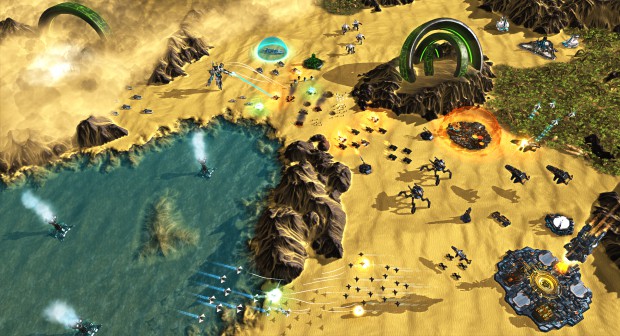 Last Call:
Etherium is a solid real time strategy game with engaging game mechanics. It has massive potential for becoming a hit, especially with the right support and nurturing over time. This is the game to watch and play with hopes that one day you can say you were playing it before anybody knew what it was.