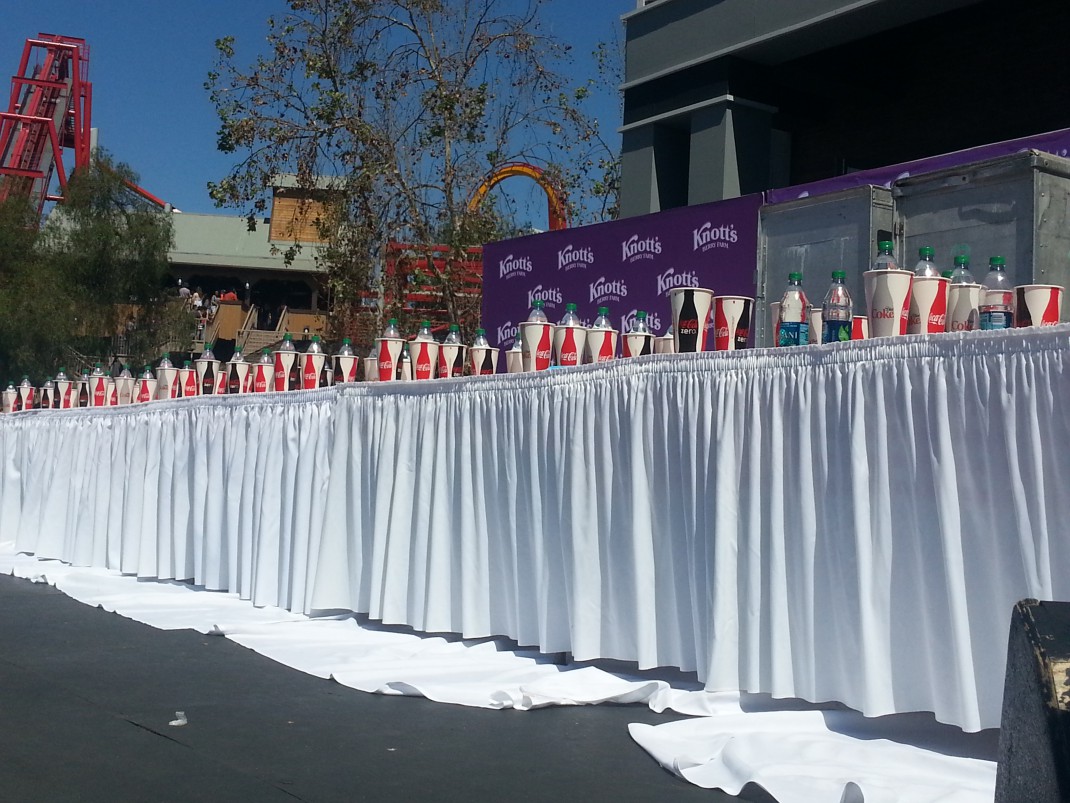 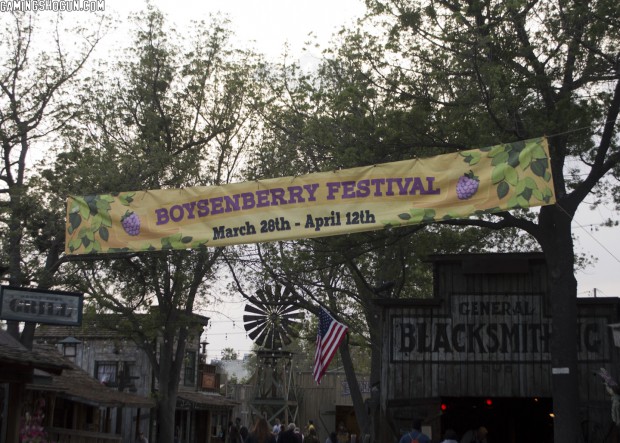 Knott’s Berry Farm has a very special place in my heart, and in the hearts of most of my friends. Knott’s was the site of my very first job over twenty five years ago, and is still one of my favorite places to go. So when I had the chance to visit Knott’s Berry Farm on their opening day of their Boysenberry Festival, I jumped at the chance. Going into this review, I knew I had a bias that I had to deal with, but as a person who takes his job seriously, I knew I would be able to separate what I already feel from Knott’s and what I got to experience at the Festival.

Let’s start off with the whole reason for going to the Boysenberry Festival to begin with: Boysenberries. Knott’s is world famous for their boysenberries – a berry that is the hybrid of the blackberry, the raspberry, the loganberry, and the dewberry. For me, it’s that perfect combination of tart and sweet that I absolutely love in a berry. Since this is a Boysenberry Festival, Knott’s has produced a number of great food items that can be found all around the Calico Ghost Town.

I started out the day by trying the Boysenberry Flautas. These rolled and deep fried tortillas were filled with a warm boysenberry filling, then sprinkled with powdered sugar. The two that I received were hot out of the fryer and was absolutely perfect. Easily the best thing I had to eat all day. I then had to try the BBQ Wings in Boysenberry Sauce. The wings were a tad cold, and were probably sitting out for a little bit since there was no line at the booth, but were tasty nonetheless. The sauce had a very nice hint of the boysenberry, which puts it into the sweet bbq sauce category. A little warmer or fresher off of the bbq and these would have been perfect.

I also tried the Deep Fried Alligator with Boysenberry Aioli. I have never had gator before, and thought that this was a very good dish. I did run into the same issue I had with the bbq wings, and that is my gator wasn’t as warm as I would have liked it due to sitting there waiting for a customer. Still, with the boysenberry aioli and the french fries it came with, the gator was a very good meal. With the gator I had the Boysenberry Triffle which, unfortunately, was the most disappointing thing I ate all day. Traditionally, a triffle is cake, ice cream, whip cream and fruit in layers. This triffle ended up being a cake with ice cream, whip cream and boysenberries on top. More like cake a la mode then a triffle. Besides not being what I expected it to be, the triffle was a very good tasting dessert.

Knott’s also has a Wine and Craft Beer Tasting event during the Boysenberry Festival. Inside the Dance Hall, wines from all over were being served along with appetizers in a very nice setting. Boysenberry lemonade was also being served inside, but to some peoples dislike, the lemonade took the place of one of your six tastings. Keep that in mind if you go in with a child who is thirsty. Outside of the Dance Hall, there was four craft beers being served, all with the boysenberry added. A boysenberry cider, a boysenberry stout, a boysenberry beer, and an india pale ale with boysenberries added. These beers were very tasty, some a little sweeter then I like, but tasty still. The employee who worked the draft system was incredibly friendly and helpful to anyone who had questions about the beer on tap.

For me, the food and drink is the main part of going to the Boysenberry Festival at Knott’s and I feel that the park really did a fantastic job in delivering tastes and flavors that went well together without feeling forced. Nothing I had tasted bad that day, the worst thing that I came across was just the temperature of a few items because they sat around for a little bit.

Knott’s started off their Boysenberry Festival in grand fashion, with a boysenberry pie eating contest. This event was sponsored by Major League Eating and would end in the world record for whomever won the contest. Twelve competitors from all over the country competed for a chance to grab the world record and the $2000 first place purse. In the end, Joey Chestnut defeated top ranked women’s eater Miki Sudo for the top prize, eating fourteen pounds of boysenberry pie to Miki’s eleven pounds. It was a great event to watch, but I kept imagining the scene from Stand By Me where David Hogan vomited during the blueberry pie eating contest. Yeah, it’s as messy as it sounds.

While the Boysenberry Pie Eating Contest was a one day event, there are other events going on during the Boysenberry Festival that you can check out. The Peanuts Gang has two new spring shows; Peanuts in the Park and Lucy’s Really Big Spring Show. There is also Salsa Dancing in Fiesta Village and a dj that plays music from 7:30 until close in Charlestown Square. Lastly, Krazy Kirk and the Hillbillies have multiple shows playing each day at the Birdcage Theater.

The big draw for the Boysenberry Festival is the food. You could spend your whole day at Knott’s Berry Farm doing nothing more then wandering around the Calico Ghost Town and eating some of the best food you every had with boysenberries in it. The park is decorated nicely for this festival, and the entertainment goes well with the feeling of spring. The day we went it was a sunny and warm day, which really helped promote that feeling of a country spring festival. I really enjoyed having a Wine and Craft Beer Tasting event in the park, though I would have preferred that the craft beer be given a little more respect then a draft system out back with only four beers. Overall, I thoroughly enjoyed my day at the Boysenberry Festival. I would definitely recommend this to anyone that loves the taste of the boysenberry, and wouldn’t mind spending a day at a great amusement park as well. 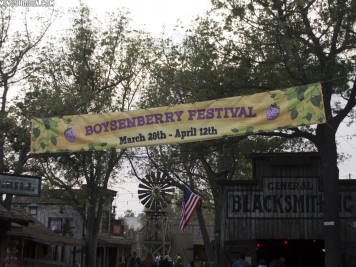 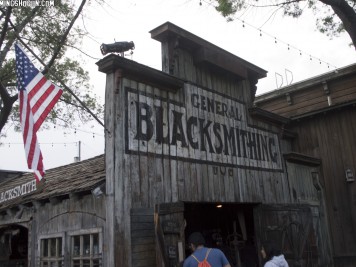 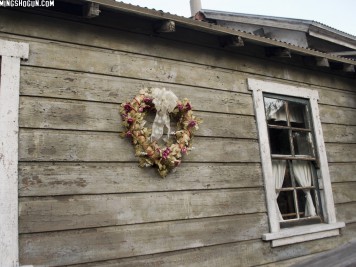 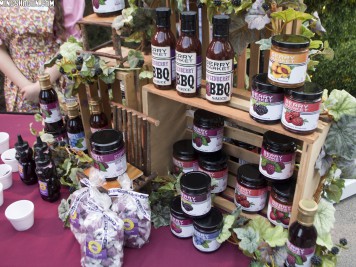 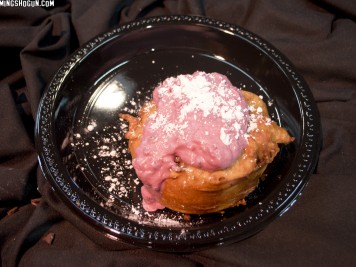 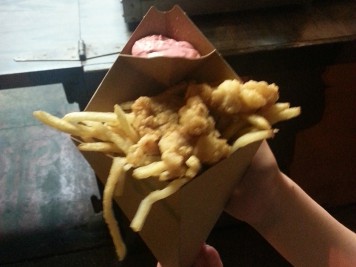 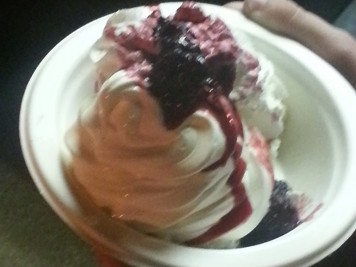 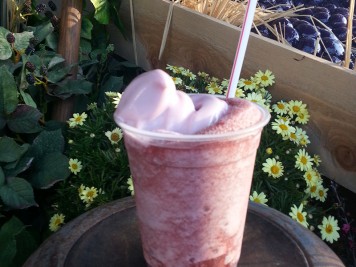 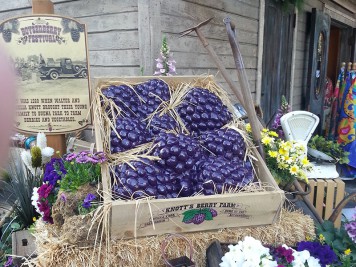 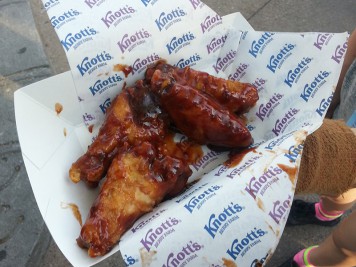 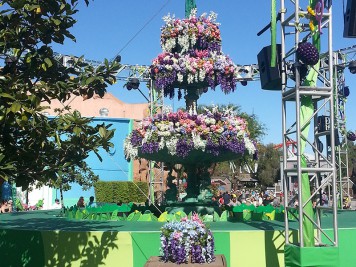 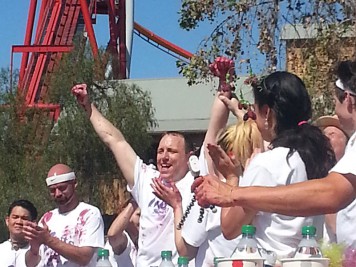 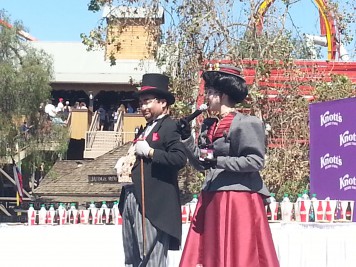 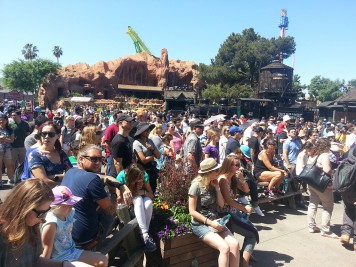 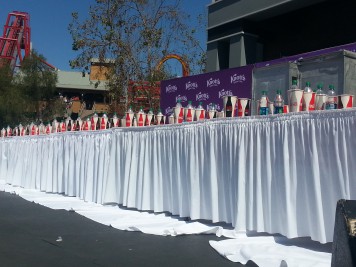