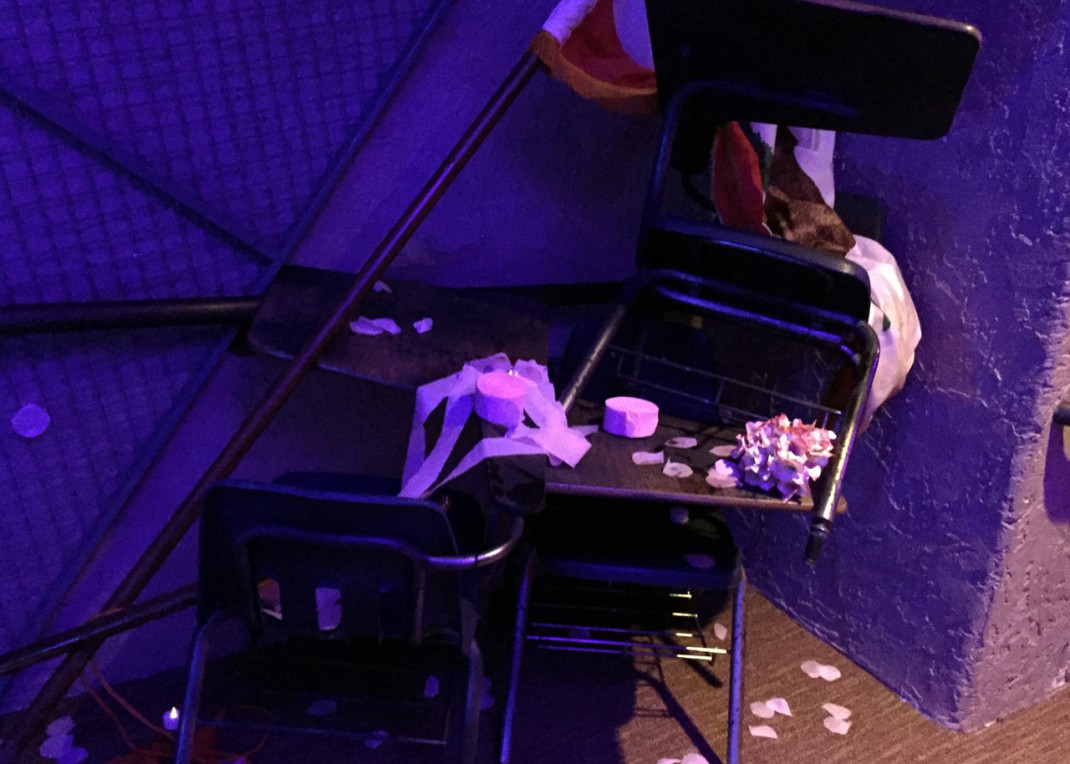 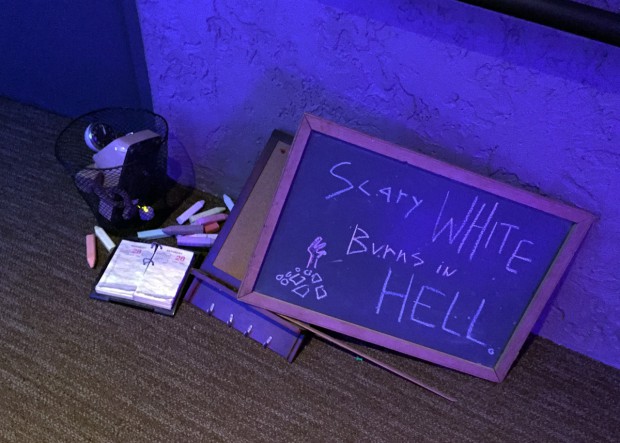 I originally attended the March 20, 2015 performance of Carrie the Musical, over at the La Mirada Theatre for the Performing Arts, not intending to review it. Many of you readers know that we have a dedicated horror/Halloween column here on the site thanks to my love of that kind of media. So, I was really excited to check out this production in person. After about fifteen minutes into the show, I knew I had to write a review of it. Carrie the Musical tells the story of a girl, Carrie, who is relentlessly bullied at school, and eventually finds her voice as well as a power she could not imagine. If you have seen the Stephen King movie or novel that this musical is based on, you know things don’t end well…

Emily Lopez does an amazing job in the titular role of Carietta “Carrie” White, and Misty Cotton is wonderful in her role as the tragic, and detestable, Margaret White, Carrie’s Mother. Kayla Parker plays as Sue Snell, the girl who is most sympathetic towards Carrie and Valerie Rose Curiel plays Chris Hargensen, the true villain of the story. Jon Robert Hall plays Tommy Ross, Carrie’s prom date, and Garrett Marshall plays Billy Nolan, boyfriend and accomplice to Curiel’s Hargensen.

Emily Lopez has a terrific way of getting the audience to feel sorry for her and protective of her all at the same time. By the musical’s climax, you can understand exactly why Carrie does what she does in a blind fit of rage. Also, big kudos to Lopez for fearlessly doing a fully nude scene on stage. Lopez uses the vulnerability of the situation to her advantage and sells the sad, shocking scene to the audience with the skills of a veteran actor. Misty Cotton manages to masterfully-walk a fine line in a place where the adjectives “crazy”, “sad”, and “tragic” all merge together and this further adds to how we feel about Carrie and her struggles. Like most characters in Carrie the Musical, Margaret White also has her own cross to bear (no pun intended). Their relationship throughout the musical is complicated, to say the least.

Kayla Parker’s Sue Snell is the character we are first introduced to in the show and she does a great job of walking both the pre and post-prom worlds. Her character is also sympathetic to Carrie and, in terms of the story, has a lot to feel guilty about when all is said and done. John Robert Hall’s Tommy Ross is more of the “straight man” to the actions of the rest of the male cast. Tommy is great at sports but he has his own internal struggle about his future to deal with, and really doesn’t want anything to do with tormenting Carrie White. In fact, I would say Kayla Parker and Jon Robert Hall’s characters are the most “real” of any of those in the story – middle of the road kids who feel for what Carrie is going through, they try to make things right, but also are going through their own issues. 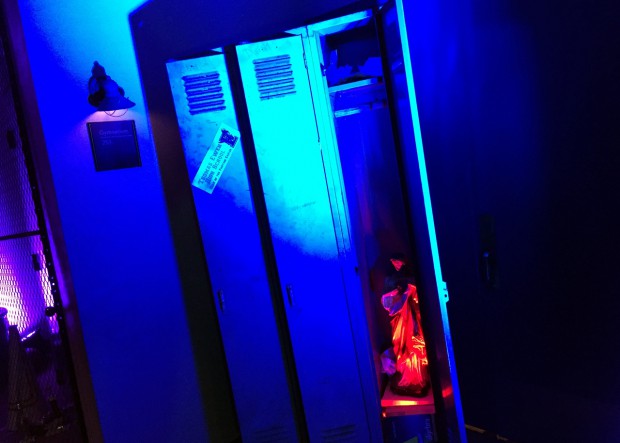 Valerie Rose Curiel plays the malicious and evil Chris Hargensen and she is outstanding in this role. Before that gets misconstrued, I will state for the record that I heard Curiel speaking after the show and she was exceptionally nice and nothing like Chris. This makes me give her even more praise as she really made me hate her character consistently through her performance. Chris is broken and, in some ways, the true monster of the story. Then again, there are also a few moments, phrases, etc where you can see some cracks in her armor and those moments give the audience pause in thinking what she must have gone through to be the way she is. Garrett Marshall’s Billy Nolan is the Yin to Hargensen’s Yang. He is a trouble-making, give no f***s about anything student that looks to be on a one-way trip to prison or worse. Like Curiel, Marshall makes us seriously hate his character’s guts. Also like Curiel, Marshall is nothing like his character – I have spoken with Garrett several times now and he has always been friendly and open. They are both highly commendable in their performances as bullies.

In my watching of this performance, I was shocked at just how seriously I viewed what was happening to Carrie. I was sometimes angry and even a little wrathful of her tormentors. The protective instinct in me partly wanted to march down onto the “gym” floor, wrap a safety blanket around the poor girl, and take her out of that situation. This was in stark contrast to my memories of watching the movie, starring Sissy Spacek, when I was younger. I remember viewing the film as a sort of campy revenge flick where the mean girls got their comeuppance. Not this time however, and I couldn’t quite figure out why until sitting down to write this review. Maybe it was because I had my share of bullying and name calling in high school – maybe it is because I am simply older now. However, I think there is more to it than that…

There is a reason why the story of Carrie resonates so much more effectively in 2015 than it did when the original novel came out in 1974, or the movie in 1976, or even the many (sometimes failed) incarnations of the musical since 1988. That reason is simply that we live in a Post-Columbine world where, as a society, so much more light has been shed on teen bullying and school violence due to grizzly situations like that one and, unfortunately, several others. One could argue that “Carrie” is the first fictional active school shooter story – just have Carrie bring an assault rifle to the prom instead of her telekinetic abilities. But, I digress… 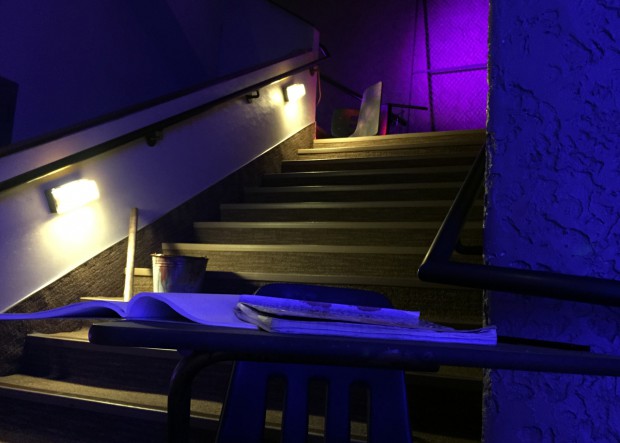 Carrie the Musical’s design/production team needs to be given huge kudos for the terrific job they did of immersing the audience into the world of Ewen High School. Throughout the performance, characters and effects appear all around the audience and it added a fun, dynamic staging to the show. This is in stark contrast to past incarnations of the musical which have been performed in a traditional audience facing a stage and proscenium style. Oh no – in this version of Carrie the Musical, you are all on stage! I am sad to report that the seating is not very comfortable as you are basically sitting on wooden bleachers. If you have a seat pad you like, bring it – you will thank me!

Now, while the show has been cleaned up and streamlined from past versions, it still has some moments where a musical number or two drags on longer than it should. Sometimes that is to hide a quick change (which is understandable) but, other times, it’s just the way it is… However, these are minor occurrences and were mostly exacerbated by the seating issue.

Overall, I would highly suggest you pick up a ticket to Carrie the Musical. It is a great show with some truly intense moments. It also features a cast that gives it their all and commits to the roles they are playing – even when scenes are uncomfortable, anger-provoking, or simply shocking, they are a joy to watch work their craft.

Carrie the Musical runs until April 5, 2015. You can find ticket information and more over at the La Mirada Theatre for the Performing Arts website. 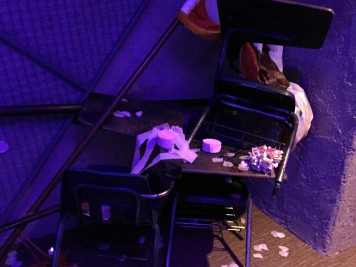 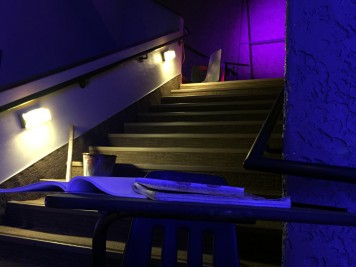 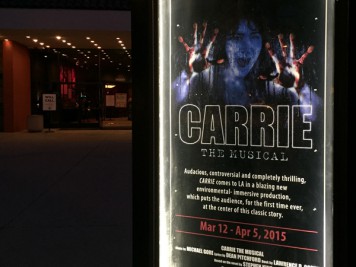 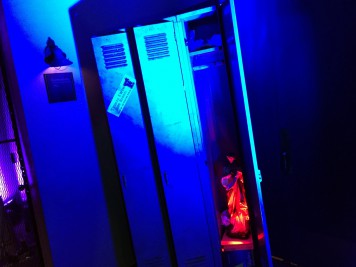 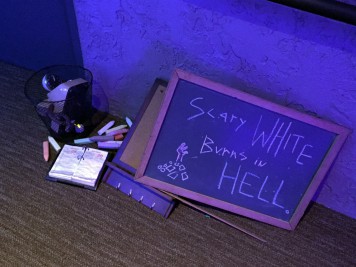