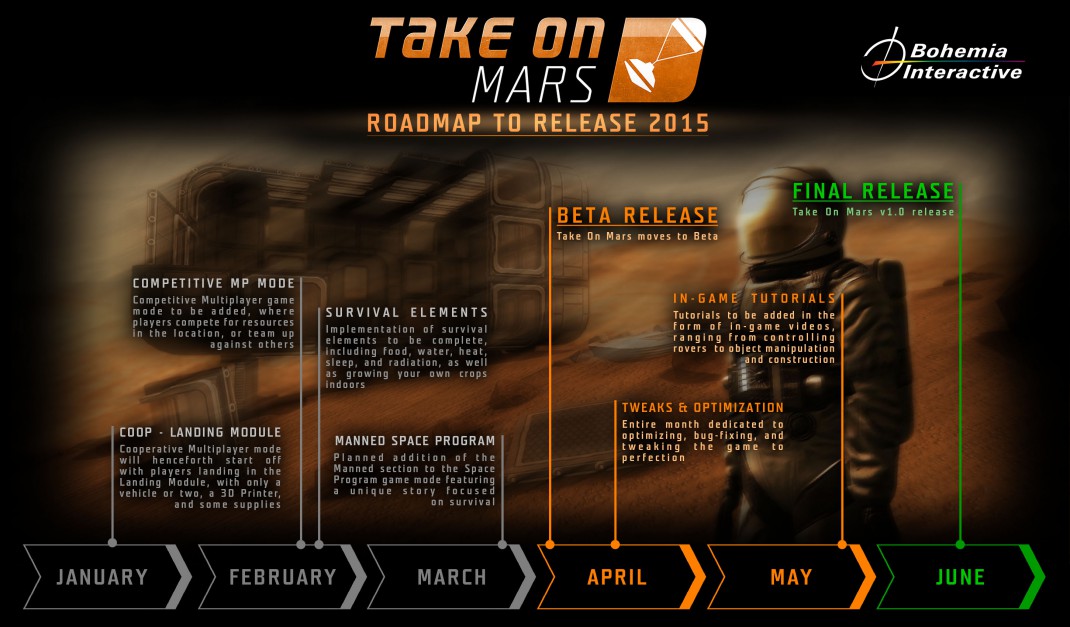 January 28, 2015 — Bohemia Interactive today published the 2015 roadmap to release for their space exploration sim game, Take On Mars – which is currently available as an Early Access title on Steam.

The highlights of the roadmap are the planned completion of the survival elements, the addition of a competitive and cooperative multiplayer mode, the integration of the manned mission into the Space Program campaign. Take On Mars is scheduled to transition from Alpha to Beta at the start of April, after which the team will focus on bug-fixing and optimization, plus preparing in-game video tutorials. The official full release (version 1.0) of the game is planned for June 2015.

Martin Melicharek, Project Lead on Take On Mars:
“Many, myself included, are looking forward to the addition of the Manned section to the Space Program mode, and we sincerely hope not to disappoint. This will be story driven, focusing on survival in a catastrophic failure scenario. I am sure this culmination to the Space Program mode will whet the appetite for playing with friends online in the Cooperative or planned Competitive modes. I hope to meet many of you on the surface of our red neighbour.”

More intel on Take On Mars’ Roadmap to Release 2015 can be found in Martin Melicharek’s latest devblog.

To enlist as a rover operator and/or astronaut, people can already pick up the Early Access version of Take On Mars on Steam and Store.bistudio.com. For more information, please visit takeonmars.com and/or follow Take On Mars on Facebook and Twitter.