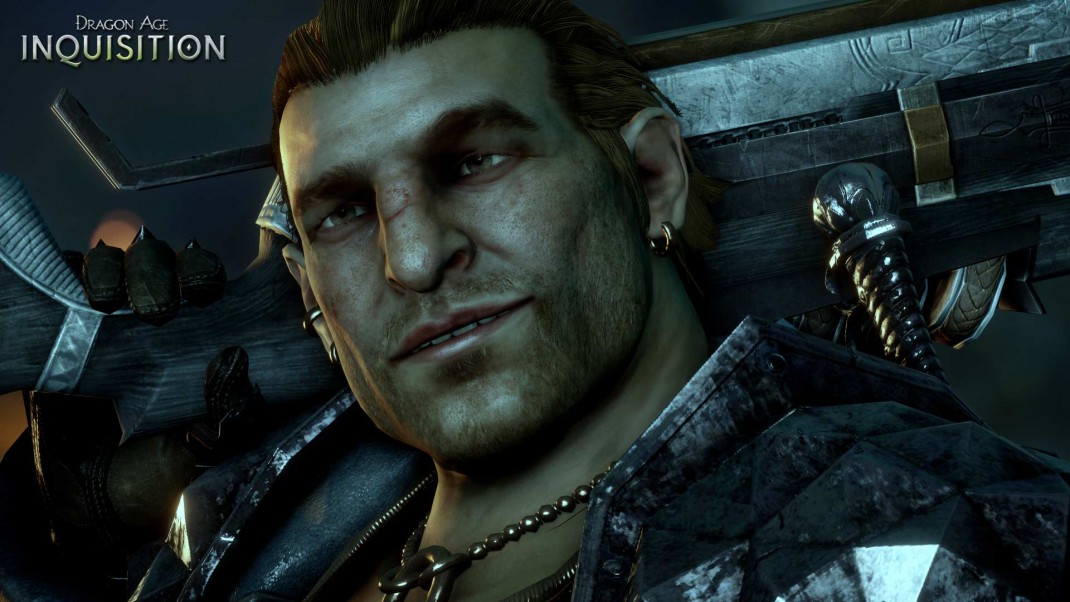 Having enjoyed Dragon Age: Origins and Dragon Age 2, I usually tear through them in a matter of days with no memory of what the outside looks like – just the satisfaction of a journey well spent. When I volunteered to review Dragon Age: Inquisition, I set a week’s worth of marathon WoW playing aside, assuming that would probably be enough to do it. I was so wrong, as that week came and went and I was still playing it. So did the following week, for that matter, and I kept on questing away in its lush world. So, with my play STILL in progress but well underway, it is time to talk about the over 100 hours of playtime you can get going through Dragon Age: Inquisition.

Story:
When the sky opens up and rains down chaos, the world needs heroes. Become the savior of Thedas in Dragon Age: Inquisition. You are the Inquisitor, tasked with saving the world from itself. But the road ahead is paved with difficult decisions. Thedas is a land of strife. Factions constantly war with each other even as a larger demonic invasion has begun. And you? You and your band of champions are the only ones who can hold it together. It’s your job to lead them… or fall.

Features:
– Enthralling, Choice-driven Narrative – You’re not just deciding who to send into which battle in Inquisition, you’re making important decisions that shape the future of Thedas. Each choice carries weight, and your actions can lead to a variety of outcomes. Inquisition is a highly personalized journey, where one wrong move could set in motion a series of events that alter the physical aspects of the world itself, making your Thedas – and your heroes – feel truly unique.

– A Massive World to Discover – The world of Thedas has never been bigger or more detailed; it’s wide open, and ripe for exploration. Discover enemy keeps ripe for the taking. Unearth hidden caves filled with lurking creatures. Thedas is vast and dangerous, but uncovering its secrets can spell the difference between victory and defeat.

– Intense, Strategic Combat – There’s no wrong way to play Dragon Age: Inquisition… except for the way that gets you killed. Fortunately, the optional strategic view gives you a god’s-eye vantage on battle. Time stops while you plan in this view, but if that’s not your style, you can just barrel ahead, crossbows blazing.

Hands On:
The official features and story description above are both gross understatements that can only be chalked up to modesty – which is not often found in video game marketing. I can’t remember the last time I did research before  playing a game and felt so surprised by its scope and grandeur. This might come across as a bit gushy, but this game lives up to and surpasses the hype surrounding it.

The game begins with an awesome opening cinematic. Even more awesome is that, at highest detail settings, the game actually looks just like those cinematics! It was funny because I was taking pictures of my display with my phone to send to friends with lesser powerful systems to show them what they were missing. My wife found herself scrolling through pics of the game while she was at work wondering if her husband had gone mad.

After the initial cinematic, it is time to choose your character class and race. In most RPGs, this is normally just a decision based on your favorite play style and racial perks. This time however the race you choose will decide your dialogue all through the game. The continent of Thedas is a very politically-active place. For example, if you decide to play as an Elf, be prepared for much racism and disdain from many of those you meet on your journey. If you figure that playing a human is the safe way to go as, let’s face it, you have had practice playing that race your whole “real” life, guess again! Expect the Elves, Dwarves, and Qunari to look at you with distrust, and many to expect you to be brutish and self-serving. Each race you play results in different interaction throughout the game. To fully experience Dragon Age: Inquisition, I suggest you play it through a couple of character configurations.

With all the visual horsepower possible in the game engine, you can expect to be able to get very detailed with how your character looks. You can add the scars, hair styles, and colors. You can shape of your character’s nose, brow, and just about every other detail you want. You will be spending a lot of time staring at your character’s face and body, so this is a step to take seriously. Thankfully, you won’t be discriminated against or favored for having red hair like you might in the real world!

All this has brought you to the start of your adventure so crack your knuckles, nestle into a comfy chair and have lots of hydrating fluids and snacks nearby. Seriously, this game can engross you so deeply that you lose track of time and don’t properly care for yourself – setting alarms to periodically take breaks is recommended!

The sky above you is green, a portal has opened and destroyed a sacred temple along with everyone in it… But you. Now you have been given (or cursed) with a glowing green hand and the power to close these strange rifts. Congratulations, you are now the most sacred and mistrusted person in all the land and you will spend the next several of your real life weeks proving whether you should be worshiped or slaughtered. Some characters will keep their opinions on these matters to themselves while others will treat you exactly how they feel, giving you the opportunity to respond in kind. Your decisions can do as little as making another character feel slightly disapproving to killing characters and changing the entire course of the game.

We try not to give out too many spoilers here at Gamingshogun.com because we believe you should really go into a story with the wonder of discovery, plus spoilers are a jerk move that should only be reserved for the worst of cases (ed. note: Or AMC Networks, thanks The Walking Dead Facebook account…). This is not one of those cases, so I will just say that there are great moments, big decisions, and amazing moments from the first minutes of play all the way to the end credits. If you thoroughly explore, it will take you a couple hours of play JUST to get to the title screen. That is one thing that I really want to recommend for playing Dragon Age: Inquisition: Explore! This game has missions that send you to one place or another but in the end most of the best moments result from wandering over in a corner of the map not yet plotted. A strange little cave on the side of a cliff may give you the piece of equipment you had been dying to find or cause a huge twist in the storyline. Players who race through the game will enjoy it, but for those that take the time to turn every stone, it will be richer an experience. Also, talk to everyone the game allows you to as some may have clues to further you along the road.

There are a couple of different styles that can be incorporated together in battle, one is the standard third person fighting position and the other is the tactical camera. If you trust the AI, which is pretty solid, and think your party members handle themselves in battle, you can stay in third person and switch between characters at whim. The AI is good in both battle and banter, which feels a lot more natural and less forced into an almost awkward flirtation like in previous games. If you don’t trust the AI or simply like to take a more tactical, in-depth control of the battle you can go into tactical camera. This mode is controlled from an overhead view of the battle with time stopped so you can choose which character attacks which opponent and in what way. Since they took away healing spells this time around and left you with a limited number of healing potions, this option definitely has some benefits and will probably keep you from having to alt to different characters to do battlefield resurrecting each other.

Besides being solidly programmed the characters you interact with are well acted and generally likable when they are supposed to be, and grating when they aren’t. Particularly, the characters in your group are well rounded and fleshed out, sometimes I even just spent a while of the journey as one of the others in the party trying out their fighting styles and experiencing their perspective. Your choice of party members are severely limited to start with but branch out quickly as the game progresses and different dynamics result in not just different battles but different conversations. Mix it up just to get even more depth from the game – you are going to be spending a lot of time with them, might as well make the most of it!

One last thing for this review: We had the chance to play the deluxe edition of the game, which is $10 more than the standard edition and worth every penny. The deluxe includes special armor, weapons, three mounts, chests and even a custom throne. They all have beautifully fleshed-out details to their graphics and special animations. There are even special items for multiplayer!

Yes there is multiplayer but it has been kept very simple so that it doesn’t overtake the single player campaign like so many multiplayer sections do. You get a small party that goes through different objectives and checkpoints. If you fall behind the game catches you up at the checkpoint so that you aren’t stumbling behind your group the whole time playing catch up. The lower levels come fast so that you can expand your play options pretty quick then slows down so you have something to work for. If you have played Uncharted 3’s multiplayer you have a good idea what to expect, it is all co-operative, checkpoint based play.

If all that isn’t enough the game even has a crafting system so that you can make what you can’t find so don’t be surprised if you find yourself picking lots of herbs.

Last Call:
I am nowhere near done playing this game and when I finally do take a break it is a game I will go back to, I will feel it calling. Dragon Age: Inquisition not only lives up to the reputation of the series but surpasses it creating a new standard for future games. I only hope I can get through a couple of playthroughs of this one before the next installment arrives, and hopefully manage to slay all ten dragons! If you crave a solid RPG with beautiful visuals and engaging story, you can’t go wrong with this game.