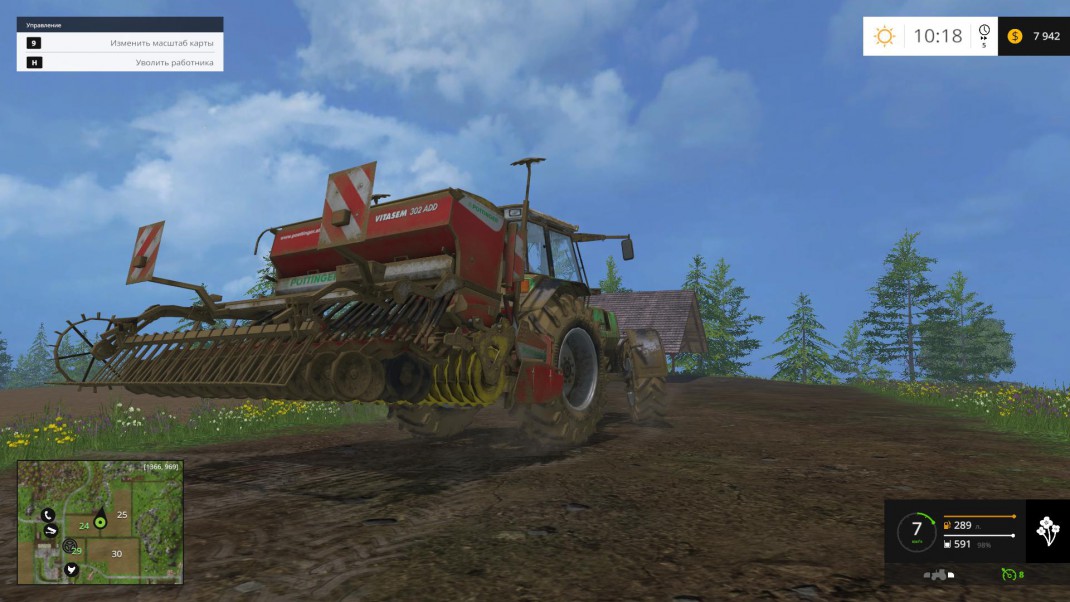 Simulators aren’t everyone’s cup of tea and the more specific and detailed a simulator gets the more this becomes true. While an average person might enjoy a simple city sim that lets you adjust the speed of the elevators and other such details in a sprawling metropolis it can becomes a bit intimating, even less enjoyable. Then there are those who thrive on such detail-driven simulations that require a meticulous mind. So though the average person might love farming that involves plants fighting zombies it takes a special breed to enjoy not just planting the seed but mixing it, plowing, sowing, fertilizing, leveling and even animal husbandry. For these folks there are games that shine like Farming Simulator 15.

Description:
With a brand new graphics and physics engine, Farming Simulator 15 offers an immense open world, filled with details and visual effects transporting the Farming Simulator franchise to a new era. Manage your own farm: from harvesting to animal husbandry, and from the sales of fresh products to woodcutting, the benefits of your exploitation will allow you to develop, and invest in new and more powerful vehicles or tools.

Across hundreds of acres of land offered by the new Nordic environment, and a renovated North American environment, use and drive over 140 authentic vehicles and farming tools, from over 40 most famous manufacturers (including 20 new brands): New Holland, Ponsse, Case IH, Deutz-Fahr… This new equipment includes a selection of vehicles and tools entirely dedicated to a new activity in Farming Simulator: woodcutting!

In multiplayer, invite up to 15 friends to help you develop your farm. Thanks to an active and passionate community, benefit from limitless new content: new vehicles, tools, and even environments!

Features:
– Over 100 vehicles and tools
– Over 40 licensed brands including New Holland, Case IH, Deutz-Fahr, Ponsse and many more
– Discover the freedom of woodcutting,with all new tools and equipment
– Play with your friends on the Internet in multiplayer mode

Hands On:
The folks at Giants Software take these games seriously and have become the name in farming simulation as a result of it. Companies are more than happy to share their brand name vehicle and tools with this title because they know that it will be the best representation of their product possible in this medium. The graphics are outstanding and I don’t just  mean the environments – which are often the case with these types of games. The tractors have perfect dimension with the attachments such as a Kuhn Sitera 3000 and their surfaces reflect just right in the morning sun. The plow digs properly in soil with the proper physics researched, the new engine offers a dimension that was there but not as well defined in Farming Simulator 2013. It is a beauty of a game to behold.

So the physics are spot on (yeah I have spent some time on farms) and the graphics are stunning but if you don’t have the scope of gameplay then these are all just wasted efforts. Luckily there is so much to this game that there are 12 tutorials just to get you properly in the seat and started. The subjects cover everything from your first plow to mixing the grain and getting it fed to your cattle. Speaking of which animal husbandry means feeding and minding the animals, not so much birthing them in this case (I was wondering what the birthing device brand name might be and if it was a tractor attachment).

Now if all this sounds a bit crazy to you then this just isn’t your game. There are LOTS of people out there who take this game darn serious and find it more entertaining and satisfying that any Call of Duty title (recently read an online clash between the fans of the two games). There are people who have waited for this game for two years with giddy excitement and seeing at teaser for it at E3 in 2014 fueled a fire in their guts that could only be tamed by getting behind the wheel of their favorite farming vehicles all updated and expanded. Particularly in European and Asian markets you will find full 15 player games as people struggle together to make the best farming business possible. Some are avid sim fans who believe in taming the wildest notions of what to play while others once worked the land and miss it. Still others sit in little cubicles all day and at the end of it instead of wanting to pick up a virtual weapon and blow away people around the world they want to climb inside a Grimme harvester and make new life grow. Personally I can see the appeal of that, finding your zen bringing in your crops instead of blowing up some stranger.

Last Call:
Farming Simulator 15 is just what fans of FS 2013 have been waiting for, the next evolution in the farming game genre. It has a robust single player career mode and scenarios while at the same time having multiplayer that can handle up to 15 players, all while maintaining impressive graphic quality. It is not for the casual player mind you but, for those who want a realistic feel for what it’s like in the farming business, this game is hard to beat.