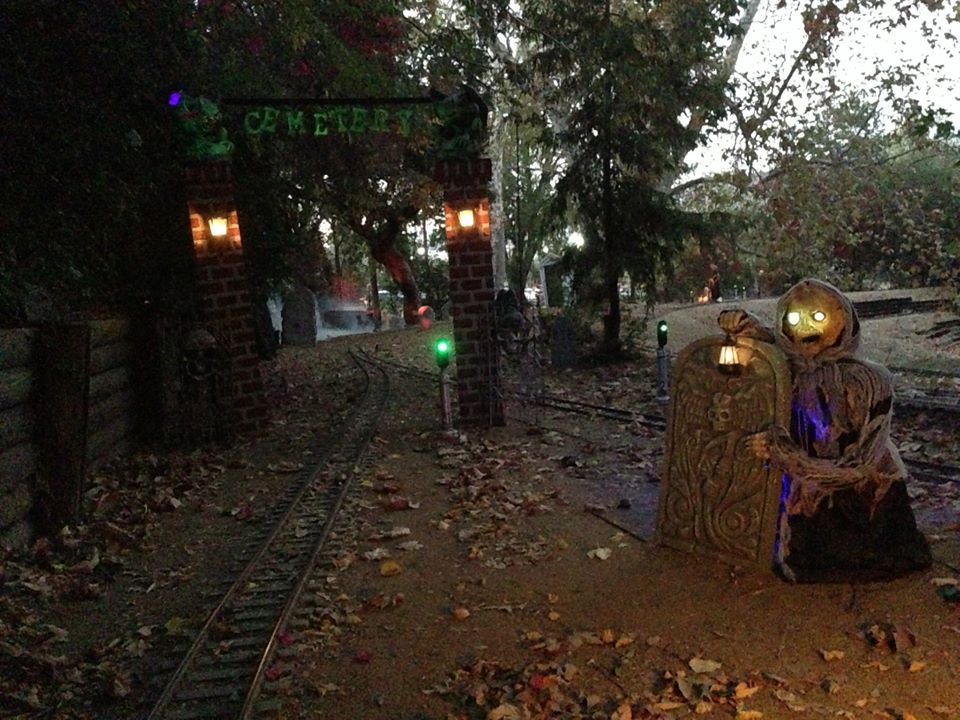 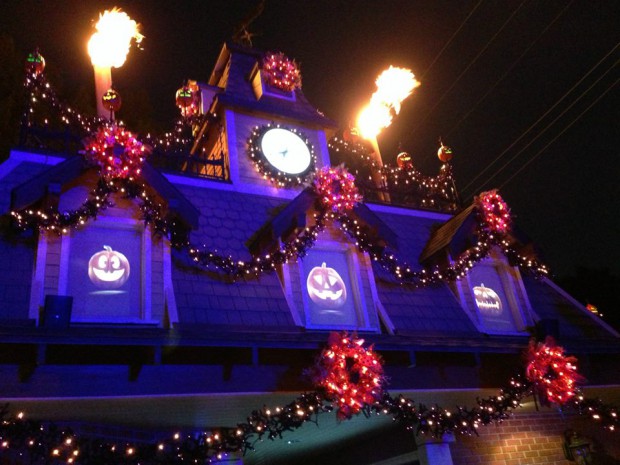 The road leading up to the site from the 5 freeway off-ramp is pretty dark and desolate, which sets the mood just right for the spooky fun to follow. Rounding the last curve, we were greeted with a ton of cars lining the street, families walking up the side of the road towards the event gate, and a staggering array of visible Halloween decorations – even Halloween music playing. We found a parking spot nearby and walked up to the Los Angeles Live Steamers Railroad Museum – the location of the Ghost Train.

The line was fairly long, so expect to wait a bit to get in on busier evenings. However, the wait is worth it. Walking into the first set of gates, the Ghost Train’s train station looms with black lit decor, a couple of pyrotechnic effects, and a set of three singing LED monitor jack-o’-lanterns which entertain guests. The amount of families lined up to get in was pretty impressive. We are used to reviewing more hardcore Halloween attractions, so the change of pace was welcome. 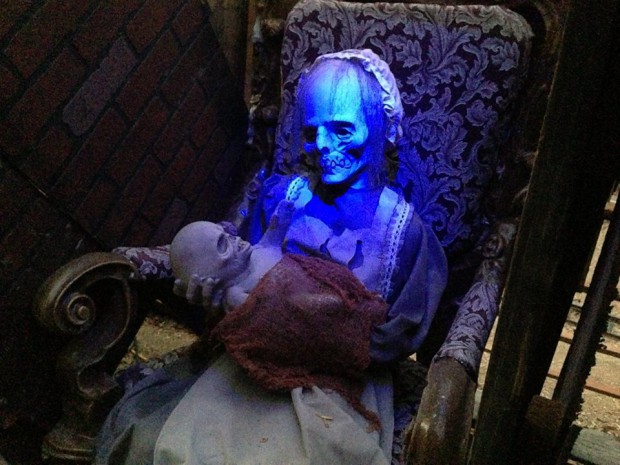 I was blown away by the detail of the small, scale model trains which traveled on by as we waited to board. The Los Angeles Live Steamers Railroad Museum has all kinds of trains – steam, diesel, and electric. Had I been there in the daytime (they also run on Sundays from 11am to 3pm), I could have spent hours admiring all the detail work put into them. When our group was called up, we boarded out train by straddling the bench seat-lined box cars and putting our feet snugly in the car’s side steps.

The ride itself is an absolute Halloween hoot of a time. Your train passes by (and through) some really cool dioramas, sets, animatronics, and more all decked out for the season. Some are obvious homages to various films and others are completely original. For those of you that get a little claustrophobic, know that there are a couple of dark, foggy tunnels on the ride that your train will travel through. However, the claustrophobic person in our group just closed her eyes for them and she was fine – they are pretty short in length. The train bench seats are reasonably comfortable, and the whole ride lasts for about twenty minutes, so you get a lot of value for the $10 dollar ticket price.

Getting off the train, I was very happy with the whole experience and it reminded me a lot of the kid-friendly Halloween activities that my family and I would go to when I was just a kid. Southern California could use more attractions like this – too many have been sent out on this haunted house “arms race” of becoming more and more extreme. 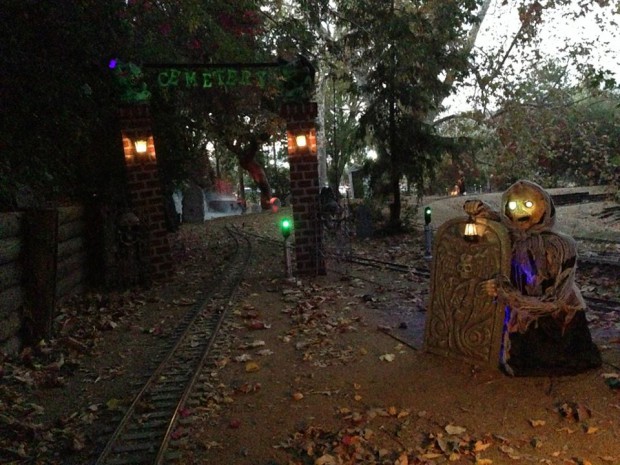 If I could change the Ghost Train somehow, I would probably add a small food/vendor area outside the gates, in the large field where the line cues up at. Even if they just invited a food truck or two out to the field, it would give people something to see/eat while they waited. As an added bonus the food trucks’ social media accounts would provide secondary advertising for the Ghost Train. After all, nothing seals the Halloween fun deal like a hot cup of cocoa on a cold evening.

Additionally, I have to give the event big applause for the Ghost Train’s clean “port-a-potty” restrooms. Many events suffer in this department, but on the night we attended, it appeared as though everyone was keeping things hygienic and that is always appreciated.

Overall, the 2014 Ghost Train is the perfect family-friendly Halloween attraction for you and yours. It has lots of spooks and fun without the over-the-top, extreme blood and guts of more hardcore events – all with a reasonable ticket price. The Ghost Train runs from 7pm to 10pm on October 17, 18, 19, 24, 25, 26, 30, 31 as well as November 1 and 2.

You can find out more information both at the Los Angeles Live Steamers Railroad Museum Facebook page and official website.