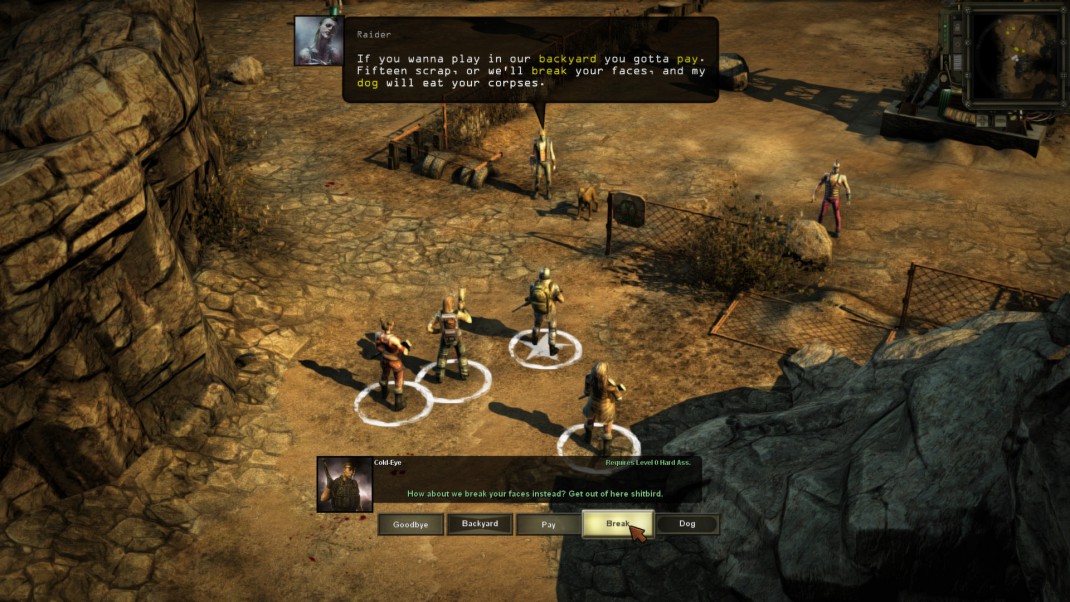 Seems like a lot of the games that I’ve been given to review lately, have had their origins in crowd funding. Whether through Indiegogo or Kickstarter, developers of smaller games are heading to the people to gather funds for their ideas. Wasteland 2 by inXile Entertainment is another such product, but unlike many of the others that I have played, Wasteland 2 is a great game. With close to $3 million in funds from Kickstarter, inXile Entertainment turned out one hell of a fantastic product and just a year late from their original proposed release date. Wasteland 2 is the first official sequel to Wasteland, the post-apocalyptic role playing game that kicked off the entire genre back in 1988. Twenty six years later, and we finally have another game from the series that inspired Fallout, and it is an absolute gem.

Civilization as we know it ended in 1998 due to a nuclear holocaust. During this cataclysmic event, a squad of U.S. Army engineers took over a prison in the American Southwest, expelling all of the prisoners into the unknown aftermath of this holocaust. The engineers brought in groups of survivalists from the local area, and together were able to fortify the prison and survive. The survivalists and the engineers, together, form a group in the same vein as the Texas Rangers to help bring law and order back to this post apocalyptic world. They name their group the “Desert Rangers” and set off to help the people of the land.

Wasteland 2 is a role playing game in the most classic sense of the word. You begin by creating your group of four rangers. The way they look, the skill sets they have, even their backgrounds and life histories are all up to you to create. You can spend hours writing back-stories for each character you create, to bring each Desert Ranger to life. Of course, that life could just last for the next ten minutes, so be prepared to lose your work in a hail of bullets if your not too careful. 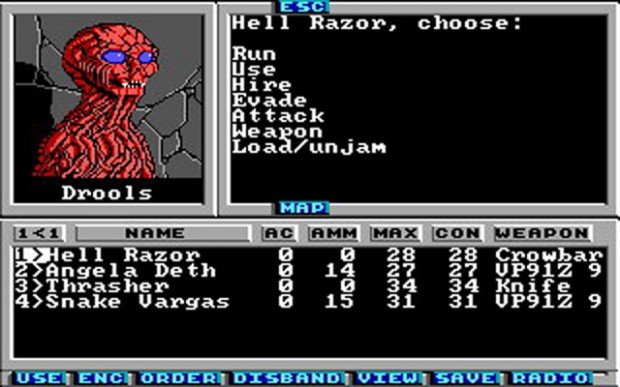 A screenshot from the original Wasteland. Graphics have come a long way…

The story of Wasteland 2 adapts to the choices that you make during the game. These choices are not your typical “good vs. evil” choices where you can easily decide what to do and how you want to shape your game play, but tough moral decisions that will affect the game world around you. During the first mission, you will receive two radio messages from two towns that are under fire, at exactly the same moment. You must chose which town to save and which town to ignore. This will change the world around you, not only will the town you ignore be seriously damaged and have less resources for you, but the people of that town will hold a grudge against the Desert Rangers since they ignored their plea for help. Characters will react to your decisions in game and this will change the world around you, so you will have to live with your decisions.

The story for Wasteland 2 is incredibly engaging, with moments of chaos and quiet throughout the game. The world you explore is rich, deep and well thought out. The story is brought to life mostly by text, but with just the right amount of voice work to make it interesting and believable. The choices you make during the story are all morally gray, with no obvious good or evil consequences. You behave the way you think your character would behave, and the world reacts around you. From the live-action introduction all the way to the end, I loved every moment of this story.

The game play in Wasteland 2 features a semi-overhead, isometric view of the desolate environment around you. The game is best described as a role playing game with tactical, turn-based combat involving your party of up to seven characters (your four you create and up to three non player characters). When you create your characters, you choose what skills and attributes they will have so their role is determined by you. From a strong melee centered character with intimidate, to a lucky sniper with lock picking skills, each character you create will play the way you want them to. The non player characters will have their own skills, attributes, and agendas that you will need to deal with.

Combat is its own little world in Wasteland 2. Once you receive the message “Encounter Begins”, your options for character actions become vastly varied. Each character has their own set of action points that are based on their core attributes. These action points are used for everything the character needs to do. You can do multiple actions in a turn as long as you have enough action points to do so. If you want to take a shot with a weapon, move to cover, and then try to bandage yourself it is possible as long as you have the points and the skills to do so. These points can be saved and moved to your next action phase to give you a vast amount when you really need them.

Items can change the way you view combat as well. Each piece of armor not only can change your defense statistic, but can either slow you down or speed you up depending on the weight of the armor. Food, weapons, and equipment all have tactical decisions that will need to be addressed in combat. Every time you assign a piece of gear or eat something in Wasteland 2, you will have to have combat in mind. In the easier modes of play, this won’t have too much effect on combat, but in the harder modes it becomes a matter of life or death.

I really enjoyed the way Wasteland 2 played, especially the amount of choices you have during combat. With a variety of tactics available to you, and depending on the group you have gathered, the combat scenarios can be played out in a multitude of ways. The issue that I did have with the game play of Wasteland 2 is how the skills work. I have gotten used to how Fallout 3 has developed a skill system, to where the more you use a skill, the better it gets. Wasteland 2 goes with the more old school method of only giving out skills when you level up, and that can be a problem if you need a particular skill at a particular time. This is more of a personal choice issue more than a knock against the game, a little bit of how games have changed over the years and sometimes it is for the better.

The look, feel and sounds of Wasteland 2 is incredibly engrossing and truly brings the game to life for me. The world is full of little clues and hidden spots to explore, and looks great while you do it. The voice acting is just enough to make the world feel lived in, without being too much to be a drain on the funds that were available. Even the live action scene in the introduction was very well done and was a great way to introduce the world of Wasteland 2 to those that haven’t played or have forgotten the original Wasteland.

Wasteland 2 is proof that a Kickstarter funded game can be great. What inXile Entertainment did with the nearly $3 million in funds from Kickstarter is nothing but incredible and proof that a solid, fun gaming experience does not need a movie sized budget. The story of Wasteland 2 is well developed and paced very nicely, with sections of absolute chaos and quiet parceled out to make the ride enjoyable. Game play is solid and gives the player a multitude of options in and out of combat, which is absolutely necessary at the higher difficulty levels of the game. The look and feel of Wasteland 2 adds to my enjoyment of the game by giving me a world that looks both lived in, and full of characters, places, and secrets to discover. If you liked Fallout 1 and 2, but never had the chance to play the game that made Fallout possible, I would strongly recommend picking up Wasteland 2. Wasteland 2 is currently available on Steam for $39.99. You can also pick up the original Wasteland while you are there for $4.99 and loose yourself for a long, long time in a couple of great role playing games.