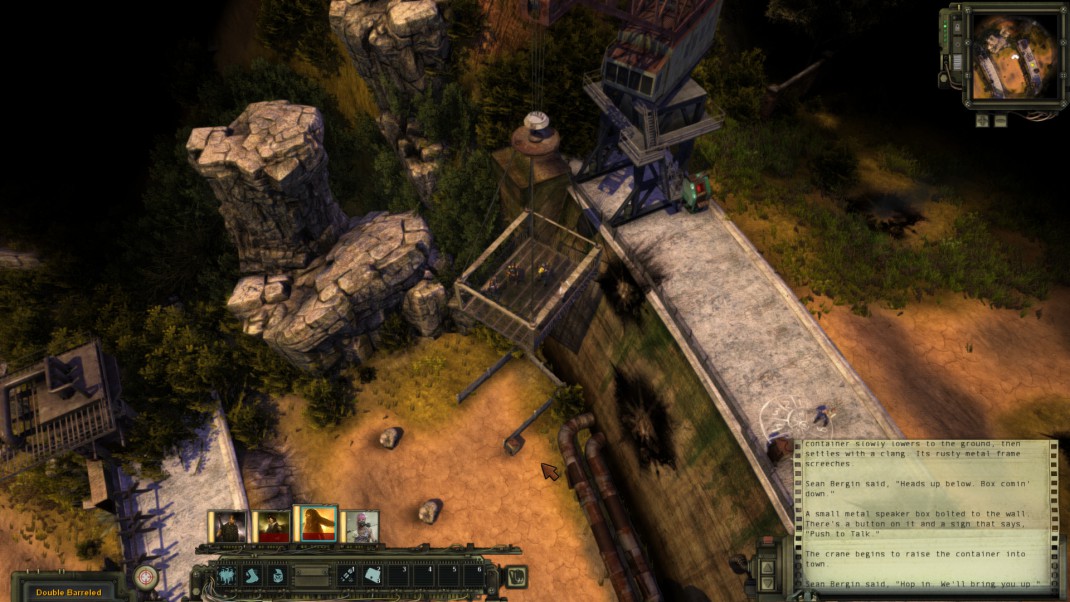 A Preview of inXile’s Wasteland 2

Taking the things that made games like Wasteland, Fallout, Fallout 2, and Fallout Tactics awesome and bringing it into the setting of contemporary video games is one thing – doing it successfully is another. Thankfully, that is exactly what inXile Entertainment has done with their upcoming Wasteland 2. Developed as a sequel to Brian Fargo’s Fallout progenitor, Wasteland, Wasteland 2 puts players in control of a small group of Desert Rangers as they quest across the post-apocalyptic wastes, bringing law and order where possible – dispensing “Wild West justice” when not.

If you are lucky enough to have played isometric, turn-based combat RPGs like Fallout, Planescape: Torment, etc, then the gameplay of Wasteland 2 will be of no issue to you. Most of the time, you click and command your party to move about in a third-person, isometric perspective. Once combat has been initiated, the game turns to the turn-based system seen in those classic titles. You are able to change character stances, select firing modes, reload weapons, equip and use items (such as grenades, medkits, etc), and more. In fact, combat has such a tactical element to it, that you would be best served hashing out a small semblance of a plan prior to firing the first shot. For example, when coming upon some bandits that don’t see your team yet, you can select “individual command” of each character – as opposed to group command mode, which moves everyone at the same time. In individual command mode, disperse your rangers where they are best served – snipers towards the back, but with a clear LoS of the enemy, SMG, pistol, and melee rangers towards the front. Trust me – this bit of pre-planning will help you as combat in Wasteland 2 is pleasantly challenging.

Throughout the wasteland, you will encounter a variety of characters, each with their own stories and needs which, sometimes, you may choose to help out with. After all, as new Desert Rangers, you are swearing an oath to bring justice and stability to an otherwise anarchistic world. A big element of Wasteland 2 is the use of your radio to communicate with HQ and report in your progress. That is how you exchange experience points for leveling up, how you get new quests, etc. Hopefully, this element gets expanded upon in the retail game as it seems a bit under-used in the early access build.

In this early access build, there are plenty of items and pieces of equipment to utilize, but I am even more excited over where inXile is going to take this system prior to launch. There are so many craftsmanship skills in the game, it feels like they could go as far as creating new weapons and items out of base parts. I am purely speculating here, but it would be pretty cool. The character advancement system is well implemented and allows you to tweak out your characters to your specifications. I would suggest creating a diverse party and, for the love of all that’s holy, bring a damn doctor with you! You will need it.

Visually, Wasteland 2 is an attractive game that, while not as mesmerizing as most AAA first-person shooters are, features crisp and pretty graphics that do an outstanding job of updating those little character avatars you remember from games like Fallout. The in-game audio is good, with some above average voice over work to help connect you with the game world. There are a large variety of locations to explore and, rolling across the “travel map”, engaging in random encounters, etc is a fun, yet-harrowing experience.

While the radio is your key to communication, water is what your team needs to survive. So, roaming around the game’s post-apocalyptic travel map uses up valuable water. Water that must be refilled at oasis’s that you find scattered across the map or at quest locations (if a well, etc, is available).

Overall, I am very excited to play the retail version of Wasteland 2 when it gets released, sometime later this year. You can find Wasteland 2 both on Steam and its official website.