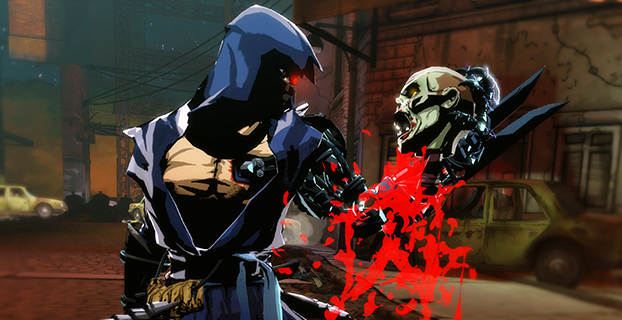 I’ve always had a soft spot for the Ninja Gaiden series – I remember sitting in a very cluttered bedroom with no concern in mind but the next level for a little side scrolling ninja (ed. note: Jaquio!!!). Luckily, this is a series that instead of fading away has adapted and managed to stay fresh even after its many installments over the years. There always seems to be another story to tell and, in this game, the story is of Yaiba, a ninja master gone rogue with a less straight and narrow approach to his arts.

Description:
The ninja are the most elite of warriors, exercising unparalleled skill, precision, and lethality for centuries. Only the most deadly candidates are given the rare and coveted opportunity to join the clan.

The final test of a ninja’s training is to face a true ninja master in combat. For years, Yaiba was that final ninja. But after suffering the indignity of serving a clan led by the weak-willed and spineless, he decided he had had enough. It only seemed natural to him that he should claim the spines they had no use for. Among his confederacy of cowards, the weakest of all in Yaiba’s eyes was the “legendary” Ryu Hayabusa.

Fifteen dead ninjas later and Yaiba found himself face-to-face with the straight-arrow poster boy. A vicious battle ensued and when the dust cleared, Ryu Hayabusa stood victorious — for the moment. But that’s only where the story begins…

What Hayabusa took from Yaiba with the Dragon Sword — his eye, arm, and life — technology restored. Due to the intervention of the mysterious benefactors, Yaiba reawakens as rage-filled as ever. Only now, a zombie outbreak threatens to plunge the world into darkness. Literally and figuratively armed with cutting-edge technology, he’ll have to carve a path through legions of grotesque and deformed undead to reach Ryu Hayabusa. With Hayabusa racing against time to determine the source of the infection, Yaiba must leave his own parallel trail of destruction if he’s to exact his revenge.

Hands On:
This title had brought up some controversy back when it was still just a trailer at electronics shows. Some praised its sense of humor, some denounced it as sexist but just about everyone saw it as a departure from the series. There is adult language, suggestive propositions and mature gestures which all scream that this is a game that is not for kids and does not take itself seriously. The developers wanted to make a game with the elements of swordplay and action you have come to expect from the Ninja Gaiden but with all the commentary of a bunch of (possibly drunk) guys sitting on the couch joking around. The jokes aren’t politically correct, they glorify sex and violence so if these are things that you might find bothersome this is definitely not the game for you. 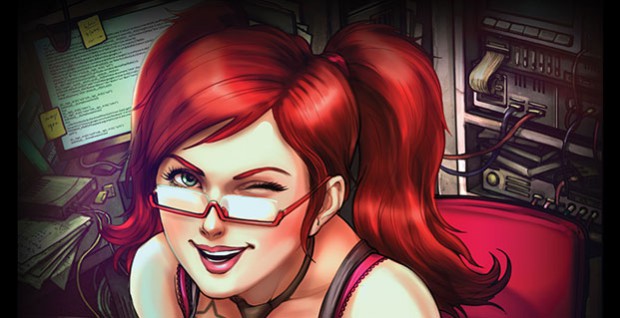 Now if four letter words and crude humor don’t bother you, there are a lot of things Yaiba really has going for it. The game’s graphics are the place really to start, every second of it is gorgeous to look at and seems to step right out of a comic book. To enhance this feeling, the cutscenes are comic book like panels, and when you receive video messages the video doesn’t move it instead just shows a still panel of the person whose voice you hear. More often than not this is Miss Monday, a techo genius with physical attributes that tend to bring on much of the adult discussions as they are barely contained in a catholic school girl uniform. Don’t be surprised if she becomes a popular cosplay replacement for Lollipop Chainsaw.  She’s your guide as well as hint giver so definitely listen close when she shows up, she isn’t just there to be more eye candy.  This game in a lot of ways feels like you are controlling a full length anime movie which is pretty sweet.

You start out with a couple moves and build up combos as you go with a customizable skill tree that allows you to tailor the gameplay to your personal style.  The moves show off more and more swordplay and techo prowess from your new arm, which with it’s chain and hook system makes me think fondly of the comic book character Lobo.  I found myself using it every chance I got.  Killing bosses rewards you with a temporary weapon, usually ripped right off of or out of the boss themselves.  The first boss doesn’t have much in the way of skills so you use his arms as nun-chucks, then the bigger the boss the bigger the bonus weapon.

The fact that this game takes place during a zombie invasion really adds to the diversity of enemies that Yaiba faces on his hunt for Ryu, add to this a corporation with secret experiments and the enemies become down right creative. You have your standard stiffs but then you have just about everything under the sun from bridezillas to sidesplitters which are zombie clowns with meat cleavers and balloons. You learn to dread when certain enemies come on the screen because even though you develop techniques on how to fight them during initial battles with them there is usually a new twist that makes them a fresh challenge next time around.

This is one of the places the game could have done with some different working, even if it was simply in the save locations. I’ll give an example of an actual fight in the game without giving any details to spoil the story. Two spawns of bridezilla show up right after a save point. Nearby also in striking range is three spawns of mini bosses you have faced. So you are fighting five tough opponents which all have powerful range and melee damage, the bridezillas even have stuff they put on the ground that you don’t want to be in that can cause damage over time. After a number of trials and plenty of deaths you get yourself through this section. You think that you will get a save point but you don’t, instead two bosses of one type and a sidesplitter spawn with a bunch of grunt zombies. Unless you manage to keep your health pristine against the bosses before these ones take you down and you have to start all over again with the previous ones. One of the things that could have made this situation tolerable would have been a save point between the two waves, the fact that there is no save point and instead of giving a new powerful boss the game heaps on old bosses in a dog pile gets frustrating quickly as you spend time trying to tighten up the already hard battle of the first wave so you can have a decent chance at the second. If this was an isolated incident or even if a check point was between the waves this wouldn’t be a biggie, but it happens throughout the game where instead of getting a new boss you get a dog pile.

The other issue with the Steam/PC version of the game is that it is an obvious port, one where all the instructions tell you what button to press on your controller no which one to press on a keyboard. If you go in and check the control choices you can find out what the keyboard choices are but when the hints on the screen are telling you to push down on the right and left sticks to perform a move in the middle of a boss fight and you have to pause the game and scroll through the control options to figure out what you need to do it can throw you off a bit. At one point I tried to do some acrobatic moves as part of the game and I couldn’t land on a platform. I kept thinking I was hitting the wrong button combination and kept checking the control menu only to eventually realize it had to be a glitch in the game, a reboot was the solution. The game can be played using a controller and seems to actually have a much more fluid gameplay but that brings up the point of possibly buying it on a console in the first place.  PC gamers experience this type of porting issue from time to time and most dedicated gamers are used to rolling with it.

Last Call:
Yaiba Ninja Gaiden Z was a true departure in it’s more mature and at the same time immature approach but has many of the strong fun parts that makes the series great. The graphics are amazing, the gameplay and developing combos is fun and the creativity with the enemies is terrific. The game is not perfect and I’m not sure I would recommend it on a PC as opposed to a console, but Yaiba is a great ninja game that only takes itself serious when it comes to the gameplay itself.