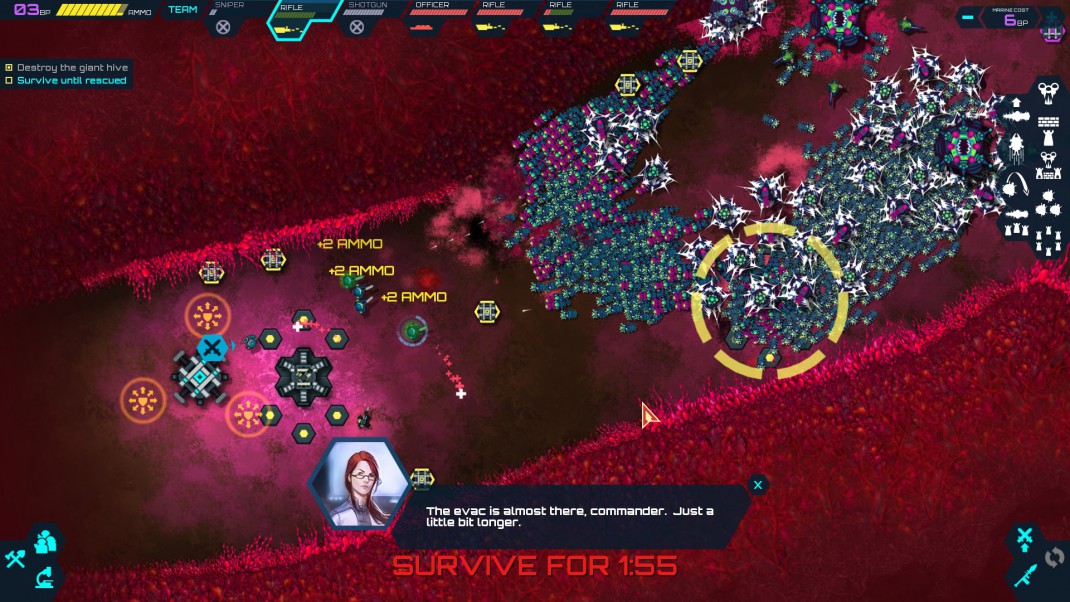 Infested Planet by RocketBear Games can be easily dismissed as a water-downed, arcade version of StarCraft II. Truthfully, that is what I started to believe the first hour I played the game. But, once you begin delving deeper into Infested Planet, you will realize that there is much more going on behind the scenes of this real time strategy game. Infested Planet puts you in charge of a squad of five space marine mercenaries that have been hired to wipe a planet clean of bug-like, alien creatures. What makes Infested Planet worth picking up for anyone that is even remotely interested in a real time strategy game is that there is something for both new and hardcore players alike. New players will find a very accessible and easy to understand RTS game that does not overload the senses with a HUD that requires a one hundred page manual, while veteran RTS players will love the challenge that Infested Planet brings with it’s adaptable AI and restricted unit numbers.

The story line for Infested Planet is fairly generic, inoffensive, and borrows heavily from the StarCraft universe. You are in command of a squad of space marine mercenaries that are being hired by the government to help purge a planet from an insectoid alien race. You spend the entire campaign taking orders from either the military leader or the head of the science division, then are tasked with completing certain objectives planetside, whether it be capture objective points, build bases, or eradication of the aliens.

The campaign for Infested Planet is fairly minimal, told through a text box before each stage of the game, with no voice acting or cut scenes. There isn’t anything about the story that I can praise, nor does the story really ruin the game play of Infested planet. The story is just kind of there, just enough to give you a background as to why you are doing what you are doing in game, but not enough to care about the characters in the story, nor be excited about plot turns.

Infested Planet is a real time strategy game, and that usually elicits a huge groan from me when I get one as an assignment. In my other life as a teacher, I have to be organized and have to manage a classroom full of students and their academics. My entire day is built around resource management and allocating those resources to the most efficient places, so when I come home to unwind doing just that in a game is not at all what I want to do. Infested Planet shocked me in its simple, though deep, game play.

One of the biggest changes is how Infested Planet handled it’s resource management system. The game runs on build points, similar to resources in other rts games. Instead of mining or refining build points, you get a certain allocation while defeating enemy strong points. You can then use these build points to reinforce or upgrade your current squad, which is maxed out at the small number of five marines. When a marine dies, the replacement will spawn at a strong point with the same gear that the original had. So sitting in your base and building up a huge army of marines to overrun the computer just cannot be done, you will have to beat the enemy with the resources you have and the limited manpower available.

The enemy AI is aggressive, think Starship Troopers aggressive. Swarms of bugs will through themselves at you in an attempt to overrun your positions with just overwhelming numbers. Then the mutations will start to kick in and make your life a living hell. Mutations allows the AI to adapt to your strategy. If you arm your marines with flame throwers to deal with the enemy, expect a mutation to develop that allows the aliens to adapt and avoid your flame throwers. Hives react violently to being attacked, and if your squad is weakened when they hit the hive, they can be quickly killed off. You have to pay very close attention to the ebb and flow of the battle, to where the enemy is strongest and plot your moves accordingly. Even after all that, a random mutation or adaption by the AI can through your plan into chaos, just like real combat.

There isn’t any direct multiplayer in Infested Planet, so don’t expect to be able to play against friends or other online. There is a skirmish mode where you can just jump into a randomly created map and destroy bugs. The only online interaction a player will get against others is in the form of leader boards.

Infested Planet does a fantastic job in stream lining the rts experience for people like me, ones that just don’t want to have to juggle an entire army of soldiers while trying to find out where the next mine of resources is, and then have to manage all of my research and development. Here, I only focus on my one squad of soldiers, the limited build and research menu, but still have an adaptable and smart enemy to face, who can send hundreds of bugs at me at any moment. Infested Planet has a nice arcade feel to it, while retaining some of it’s core rts game play mechanics.

Infested Planet take a top down view on the action, and allows the player to zoom in and out using the mouse wheel, just like other rts games. The visual aesthetic to Infested Planet is bright and colorful, almost cartoonish, but simple. Marine animations are incredibly simple looking, limited to pretty much two legs moving under a torso that swivels to show movement. While this means an aesthetic style that cannot compare to StarCraft II in complexity and beauty, what it does mean is that anyone can run this game on their computer, and that is what I believe RocketBear Games was aiming for. It was sometimes hard to tell my marines from the enemies, due to color conflicts, but the aesthetic still works for the game as a whole.

Sound is also simplified, with very little voice acting and dialogue and fairly basic sound effects and music for game play. Voice acting is limited to in game voice commands from the marines, with absolutely no voice acting being used for the story campaign. Like the story itself, the sound aesthetic gets the job done, without being fantastic and engrossing, or horrible to the point of greatness.

If you have ever wanted to get into a real time strategy game but was overwhelmed by the shear number of operations per second you needed to complete, then I would strongly suggest checking out Infested Planet, but do not think you are in for an easy ride. Infested Planet does a great job in making the game accessible to everyone, but it also does a great job in making it challenging enough that veteran RTS players will find something here to like. If you do not pay attention to what is happening on the battle field, you will lose and lose badly. While Infested Planet lacks the production values and polish of games like StarCraft II, it also lacks the $50 price tag. Infested Planet is available now through Steam for $15.