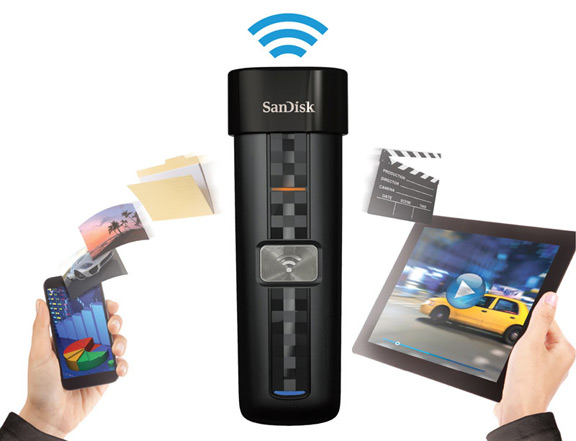 We at Gamingshogun.com got a double dose of goodness when it came to SanDisk and their new wireless media systems. The GamingShogun himself got some fun time with the SanDisk Wireless Media Drive and I got to try out the SanDisk Connect 64 GB Wireless Flash Drive – which has just about the same functionality at a slightly more affordable price.

Room in my pockets is always an issue for me, yet I can’t leave home without a flash drive. I have on more than one occasion worn them like a string of shark teeth (ed. note: Or zombie ears!) on a necklace so that I would have all my portable storage where I need it. Yet that never really helps me with transferring pictures and video off my phone, something I am pretty sure the entire Gamingshogun.com gang are guilty of not doing often enough. All this is where the SanDisk Wireless Flash Drive comes into play.

It simply looks like a slightly larger than normal flash drive and acts like one too, you can plug it into a computer and transfer files and charge it via a built-in USB tip. Where it’s different is the functionality it shares with the SanDisk Wireless Media Drive. It becomes a portable Wi-Fi media server for your iOS or Android devices. You can connect to up to 8 devices and you can stream three channels of video at once (that’s two less channels than the Media Drive). It carries a four hour charge and also comes in 32 GB or 64 GB size with expandable memory by SD card. Basically, the trade off between the two is one has a smaller battery charge and less streaming capacity but comes in at a lower price tag.

Whether you choose the SanDisk Media Drive or The SanDisk Flash Drive you are doing yourself a huge favor by entering a whole new world of file transferring and viewing. The device frees up valuable disk space on your smartphone or tablet while allowing you to keep those pictures and videos handy. Just mind the official GamingShogun.com warning and keep your eyes on the road!