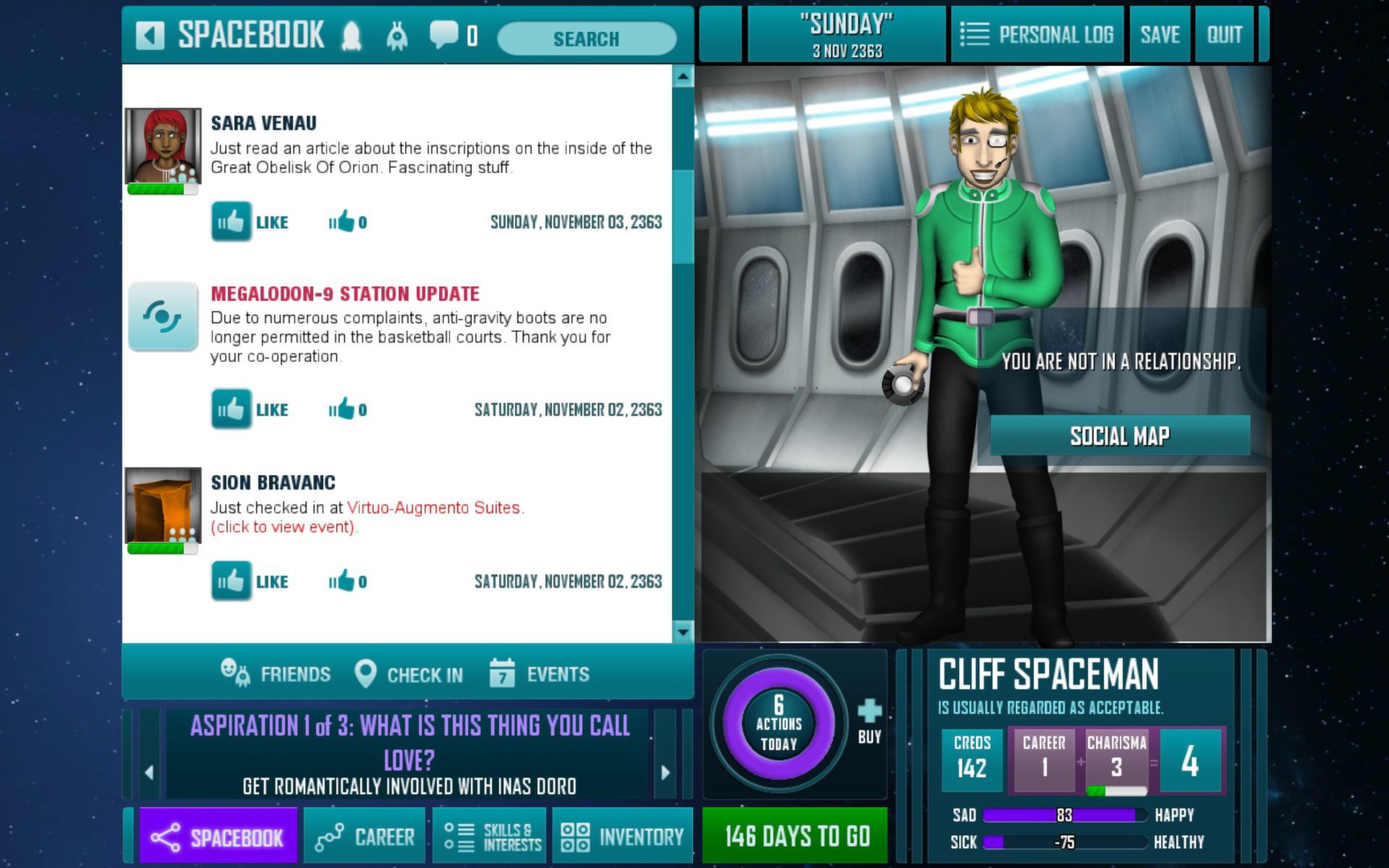 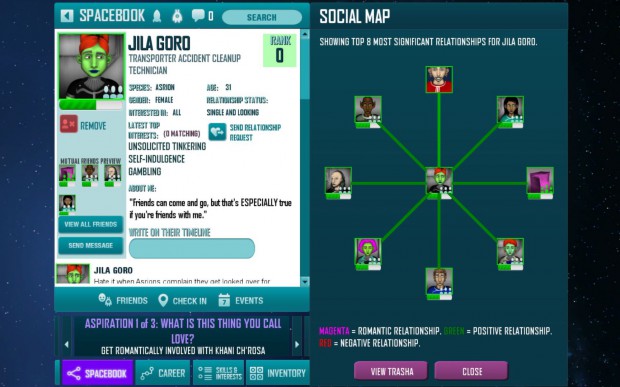 Any fan or even casual viewer of the Star Trek universe knows the cardinal rule: it’s never good to be the “Redshirt”.  The Redshirt is that Star Fleet employee who we generally never learn the name of when they go on away-missions and we usually see die at the first sign of phaser fire or strange monster or killer cloud of gas.  If there is an explosion on the ship, they are the ones flying through the air and out into the vastness of space. If the captain asks for a casualty report,  they usually are those numbers.  But what happens in between these spectacular deaths?  What do the Redshirts do when they aren’t stepping out of the way of danger?  Positech’s Redshirt tries to answer that question as well as give a name and a life to the Redshirts everywhere.

Description:
Redshirt is the comedy sci-fi sim about social networking aboard a space station, starring the station’s most ambitious low-ranking peon: you! Navigate the professional and interpersonal politics of the ubiquitous “Spacebook” to curry favor among friends and colleagues. As intense intergalactic conflict rages around you, it’s up to you to accrue those all-important “likes” on your status updates! Whether you’re looking for love, opportunities for promotion, or even a chance to play Zero-G golf with the captain, you can schmooze your way through social circles and claw your way up the career ladder. Perhaps you too can finally achieve the dream of an off-station transfer, or even the Redshirt’s opportunity of a lifetime: being sent on an away-mission! 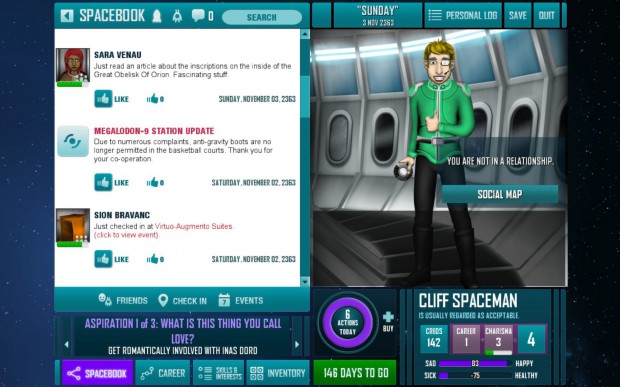 Hands On:
I was pretty excited to get this game to review, generally the only thing more fun than the hero of a universe is the poor sap trying to keep from getting killed by the hero’s actions.  Anytime you saw a Redshirt on an away-mission, you figured they were toast, if you saw a whole bunch of Redshirts going somewhere things were going to get messy fast.  So going into the game Redshirt I had some pretty high hopes.

I also went in without reading the description first which was my mistake.  I had expected silly action mixed with a disrespected existence, basically “Leisure Suit Larry in Space” type thing.  I expected the character to be looked down on or ignored until it was time to beam down and become a human/humanoid shield.  What I found was a strategy game based on Facebook being the center of society and how liking the right status updates and coordinating the right Events brings you happiness in life.  You get your girlfriend (or boyfriend) through proper Events and private messages, you get job promotions through Events that teach you skills and making your boss like you by liking his posts and inviting him to Events.  Work is just a summary page of text detailing interactions with your boss and co-workers as well as how much money you made so you can pay for Events, food or Self-Help Object Purveyor (S.H.O.P.) items to help with things like Happiness and Re-assuring Voice.  So are the away-missions, which just show a screen telling how the Redshirts died. 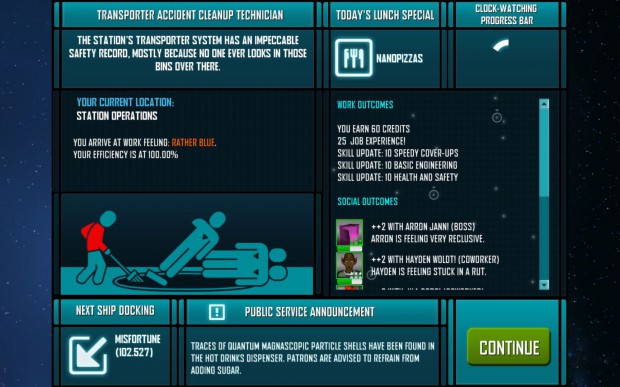 It is a good strategy game with a bit of humor thrown in but in a lot of ways it paints a pretty grim picture for the Redshirts when they aren’t getting shot at.  You start as a teleporter accident cleanup technician and mastering the job is one of your highest ambitions.  Redshirts don’t train in at the phaser range or the holodeck to become better security officers. One day, you are cleaning up Vulcan bits off the teleporter the next you are on the away team watching all your fellow Redshirts die.  Your co-workers get all their happiness from their “Spacebook” entries getting likes or not having to eat alone at the burger joint.  You manipulate Spacebook to manipulate your co-workers into liking you not for who you are but for what comments you like and what Events you throw that they are invited to.  Makes you kind of wonder if those Redshirts volunteer for suicide missions and purposely dive in front of phaser bolts. 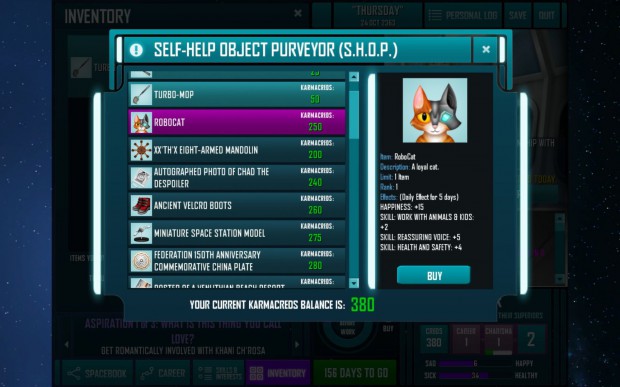 Last Call:
Redshirt is a solid strategy game with an interesting premise and does a great job at interjecting humor with a very satiric eye.  If you like strategy games, like Star Trek and LOVE spending time on Facebook, then this game is totally for you.  The Redshirt angle isn’t quite as fleshed out as I would have liked but still adds some decently funny situations.  Redshirt’s gameplay could have taken place in any day and time, in just about any city – particularly larger cities with lots of people who feel isolated.  It could have been New York instead of Star Trek and have worked just as well, the deaths just would have been from cabs instead of away-missions (sequel, maybe?). Basically, this game might not be quite what people expected in a game about the Redshirts, but it is still quite a lot of fun!