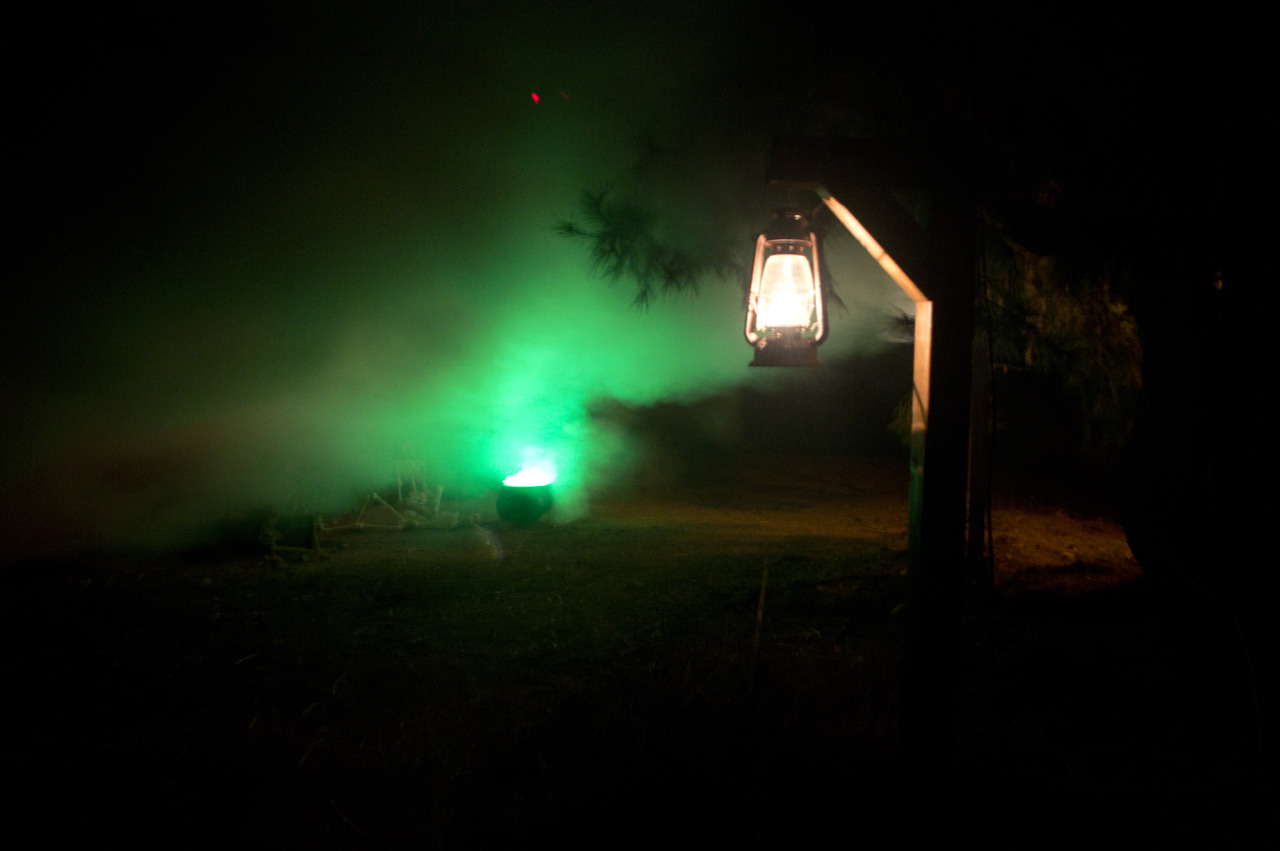 We just got back from experiencing this year’s Crossroads Haunted Village in Corona, CA. If that doesn’t ring any bells, it may be because the event has been re-branded. In previous years, it was known as Coffin Creek, and consists of five haunted attractions: 4 walk-through mazes and 1 hayride!

We trekked over from the parking lot to the “Bog of the Abyss” – an outdoor haunted maze which winds through an actual marshy bit of land. We have been disappointed in this attraction before, with its overly-dark and hard to navigate layout. This time, however, we were very impressed with the outdoor maze in terms of both the talent hiding in the fields as well as the well-marked paths. We had a great time enjoying the outdoors and could only complain that having a bit more monsters throughout would make it even better.

Both “Chambers of the Mausoleum” and “Coffin Creek Manor” were excellent walk-though mazes. Their set design seems to get improved upon each year and the monsters located within certainly have a lot of energy and intensity in their scares. The biggest issues with these two haunted houses were their queue lines. We stood in line for Chambers of the Mausoleum for forty five minutes. They send people into the haunted house in groups, which may be nice to allow each person to get a unified experience. However, it also means that they need to add some entertainment for those people waiting in the dark to get in.

Heading back to the “Dark Shadow Market Place”, we ate some funnel cake and kettle corn and then got into the “Shady Hollow Hayride”. In past years, the hayride has been a little empty, with little to no talent or sets and setups. This year, however, their hayride was taken to a whole new level and completely blew away what came before. There were multiple gimmicks setup around the hayride course as well as a ton of monster talent to be found throughout – almost too many! My only criticism for the hayride was that they need to remove some of the random monsters and replace them with more set pieces that the tractor and hay-cart move through. They have already started down this path but it could be taken a lot further. The “Labyrinth of Lost Relics” is also located up in the Dark Shadow Market Place and it was again a great haunted house with good costuming, set design, and talent. Overall, I can’t really think of anything I would do different with this one. It even lets out inside “The Apothecary” shop that sells incense. In terms of that experience, I wish they would do a bit of merchandising for the event and sell event t-shirts, etc inside that store instead, but I digress…

Additionally located in the market place is “The Pandemonium Magic Show” which runs multiple times a night for a charge of $5 or $10 dollars a person, depending on which show time you go to watch. The magician, Michael Rhodes, is really talented and the show was a treat to see.

Unfortunately, there are some things that need to be addressed to really make this event a must-see for every Halloween season. First is the overall layout of the event – it’s just too spread out and dark (and a bit dangerous). The Bog of the Abyss is located at one far corner of the property while Chambers of the Mausoleum and Coffin Creek Manor are at another – and THEN the Dark Shadow Market Place as well as Shady Hollow Hayride and The Labyrinth of Lost Relics are at another. When staff has to tell you it’s best to drive from one corner parking area to another, there is a problem. It is dark, poorly-lit, and the ground is full of pot holes and rocks to watch out for. Traveling in between the various attractions can be a bit harrowing. In order to fully enjoy this event, I highly recommend bringing a flashlight or good set of NVGs (kidding about the NVGs).

Additionally, the Dark Shadow Market Place area SHOULD be the hub of the whole event. There is just enough light to make it comfortable as well as the porta-potties and vendors. Set on the site of the Koroneburg Renaissance Faire, I hope they situate all of the mazes around it for next year. Also, there was no monster talent working the crowds at the concourse area – a huge mistake as the lines took forever to get through and having some scaring going on would have helped pass the time. As it stands now, Crossroads Haunted Village feels like five separate attractions with no affiliation to one another. Maybe that is the case, but it is not what I was hoping to see as a guest. The Bog of the Abyss might be the only exception to this as it needs to be in the marshy field located on the property. I think that they should utilize one of their hayride tractor and carts and shuttle guests back and forth from the village. Finally, the ticket pricing for the event is really messed up. They need to unify the experience to a single ticket price to experience all of the mazes and the hayride as well as magic show as many times as you want. As it stands now, you can purchase a five attraction ticket (no magic show) for about $37 dollars or single attraction tickets for $13 dollars a piece. They need to start thinking of this event as an all-encompassing haunted experience. Telling people they have access to all five events as well as the magic show will lead to increased attendance at all of them because people will figure that they have access to everything, they might as well go see it. Crossroads Haunted Village has a real opportunity here to become a dedicated haunted attraction in the Inland Empire, where there really isn’t anything like that. There are single haunted houses in various locations, but nothing like the Crossroads Haunted Village could be if they pooled their resources. Knowing that they have so much real estate, they could even offer inclusion into their entity to other, local haunts who could benefit from the room to build and increased marketing/visibility the event could provide.

Overall, the Crossroads Haunted Village has come a long way in terms of talent, set design, and quality of the attractions located on the property. However, they still have some ways to go in order to make it a must-see staple of your Halloween season experience. I will definitely be back next year to see their progress. 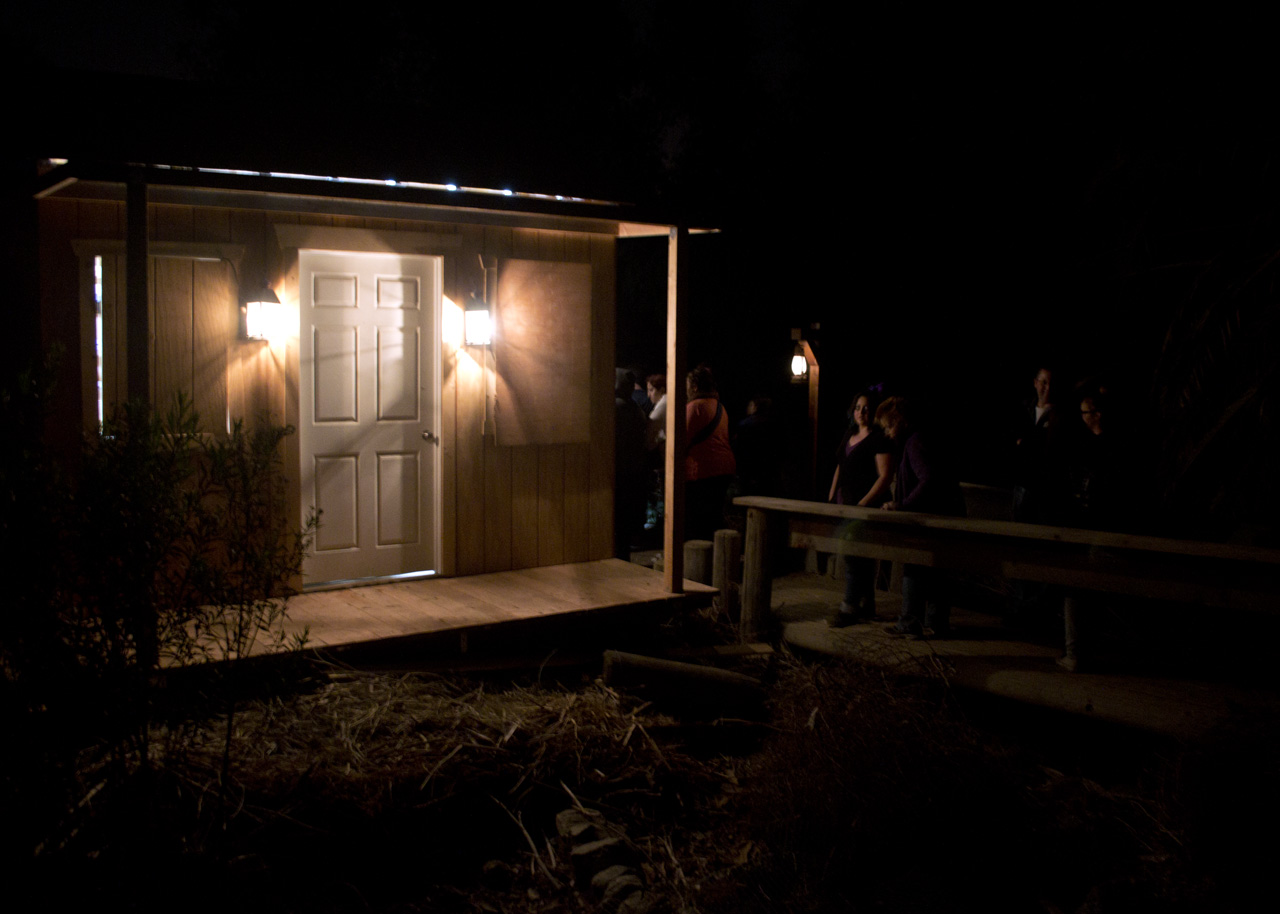 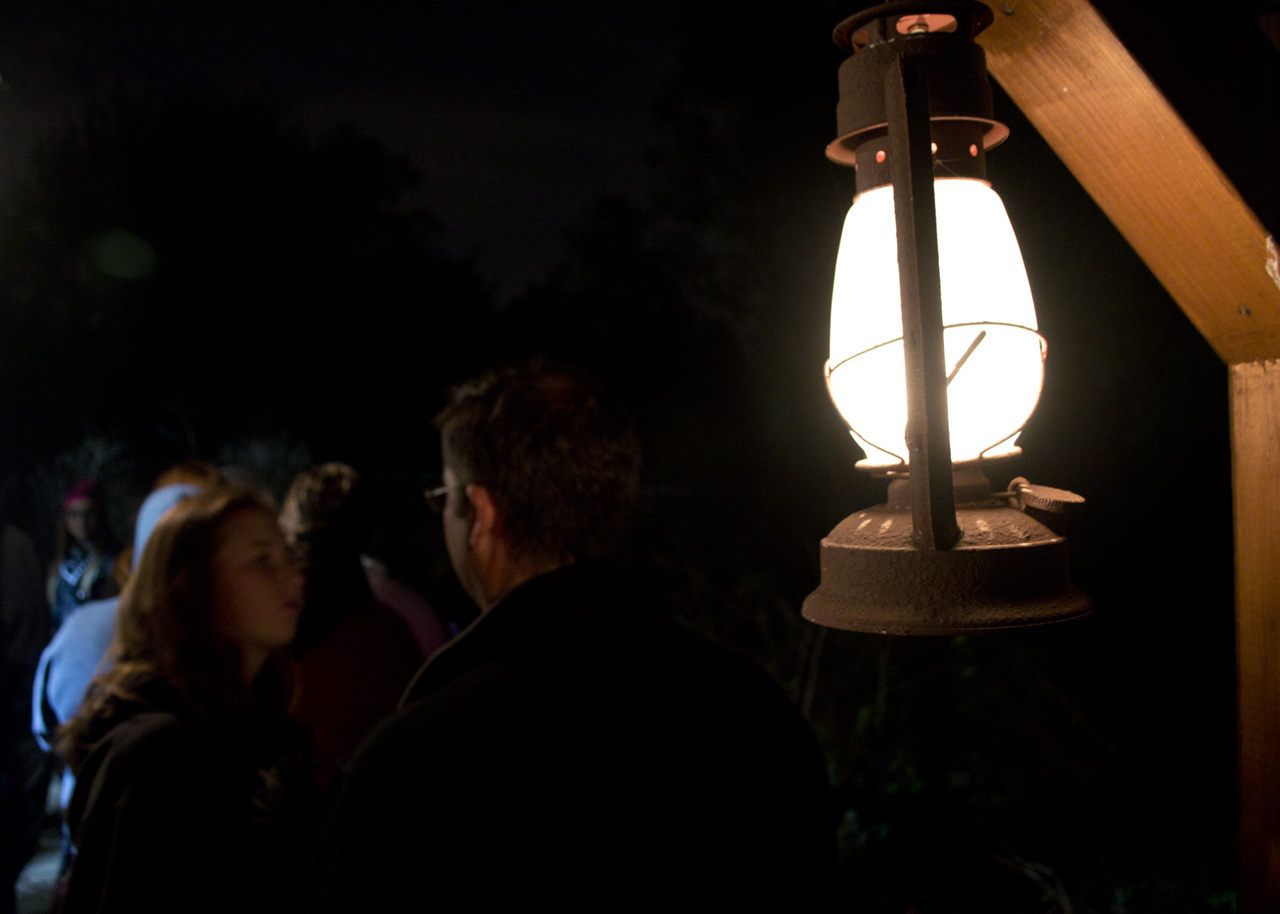 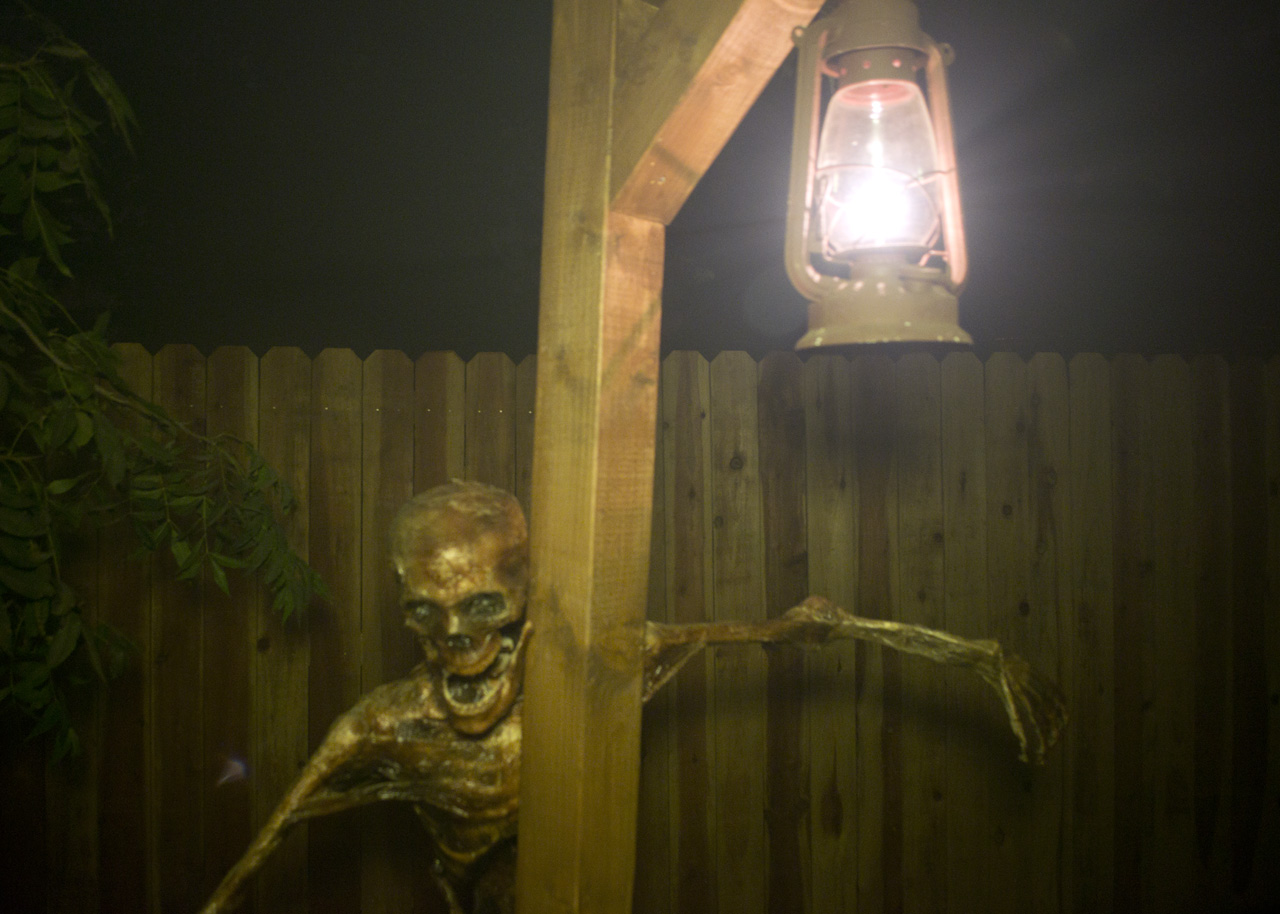 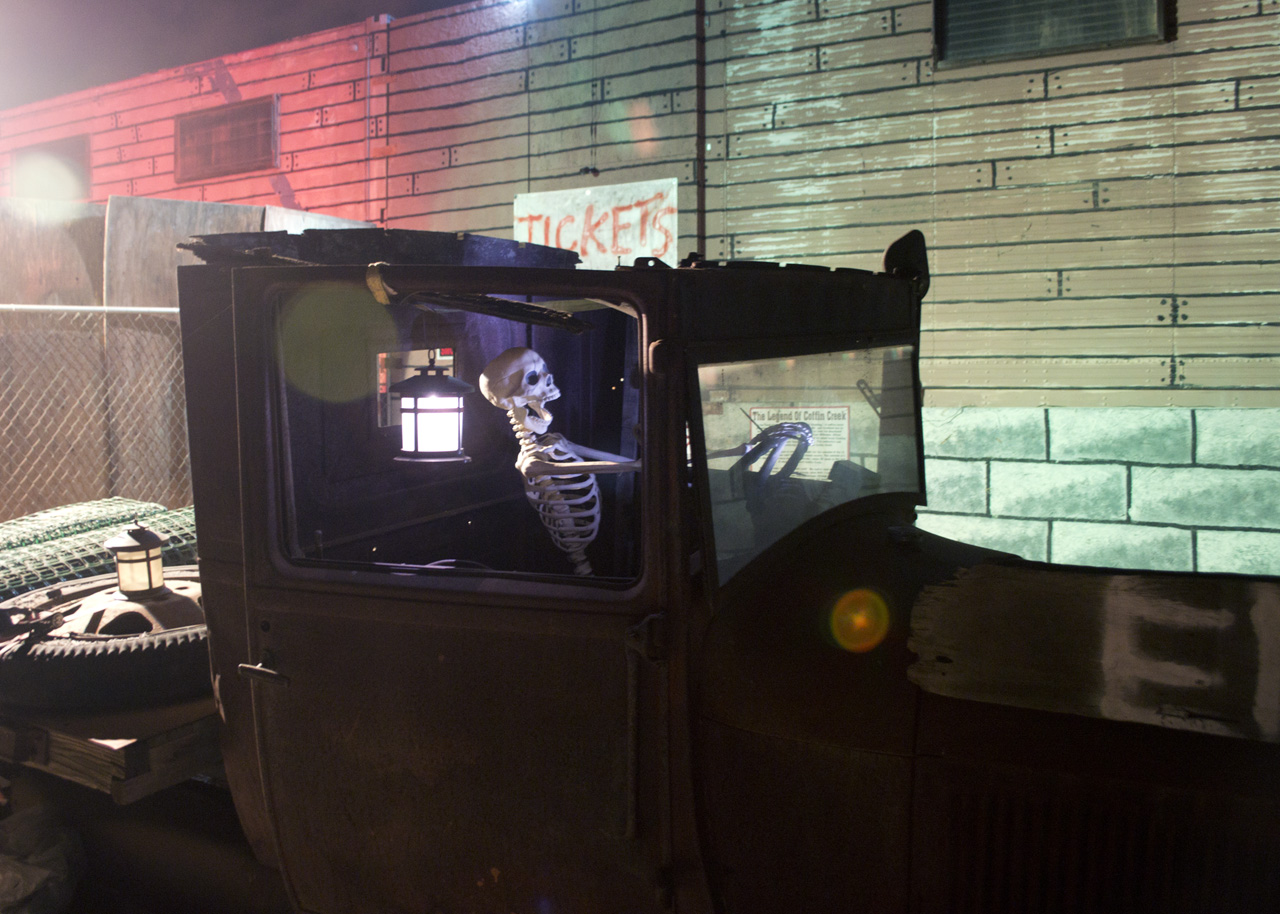 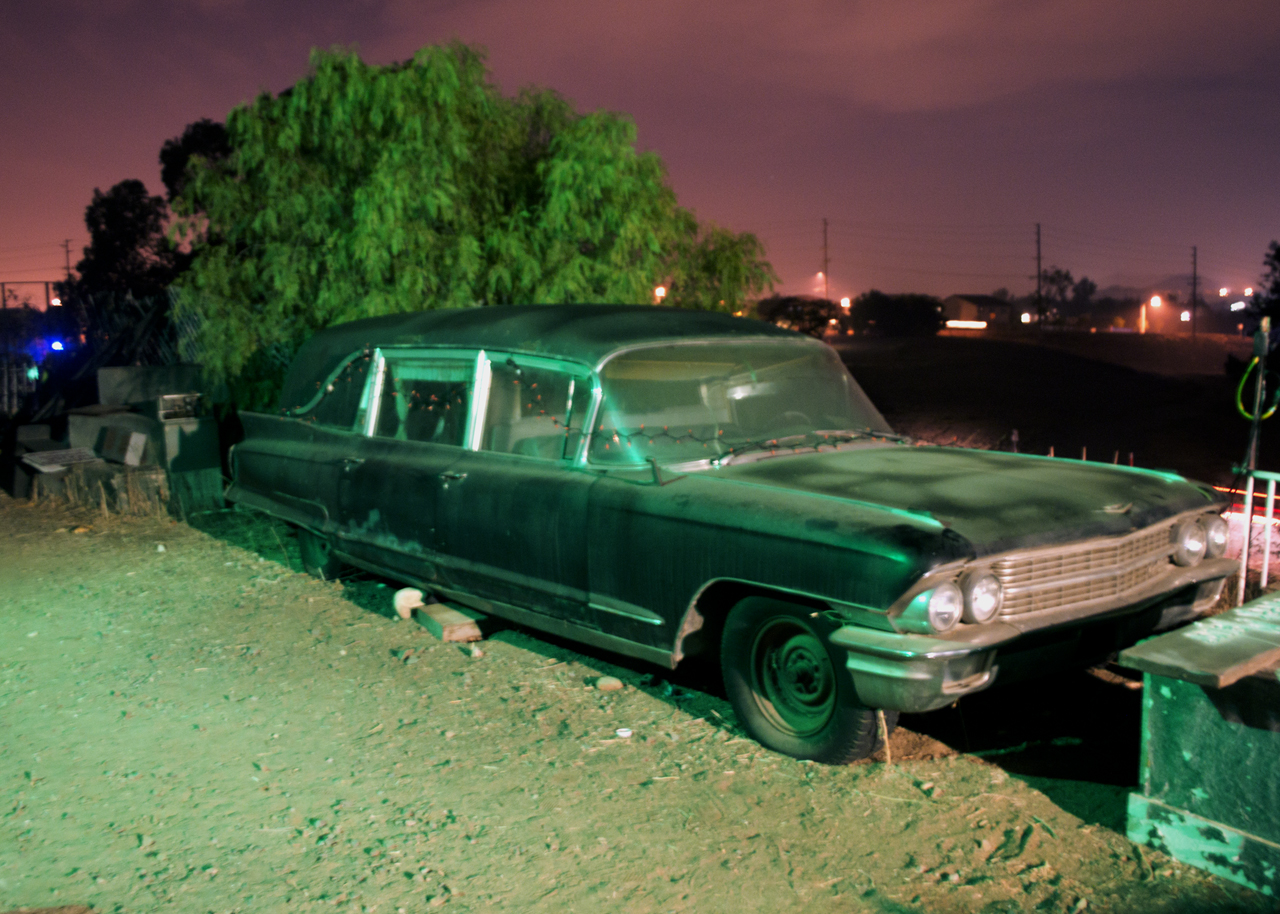 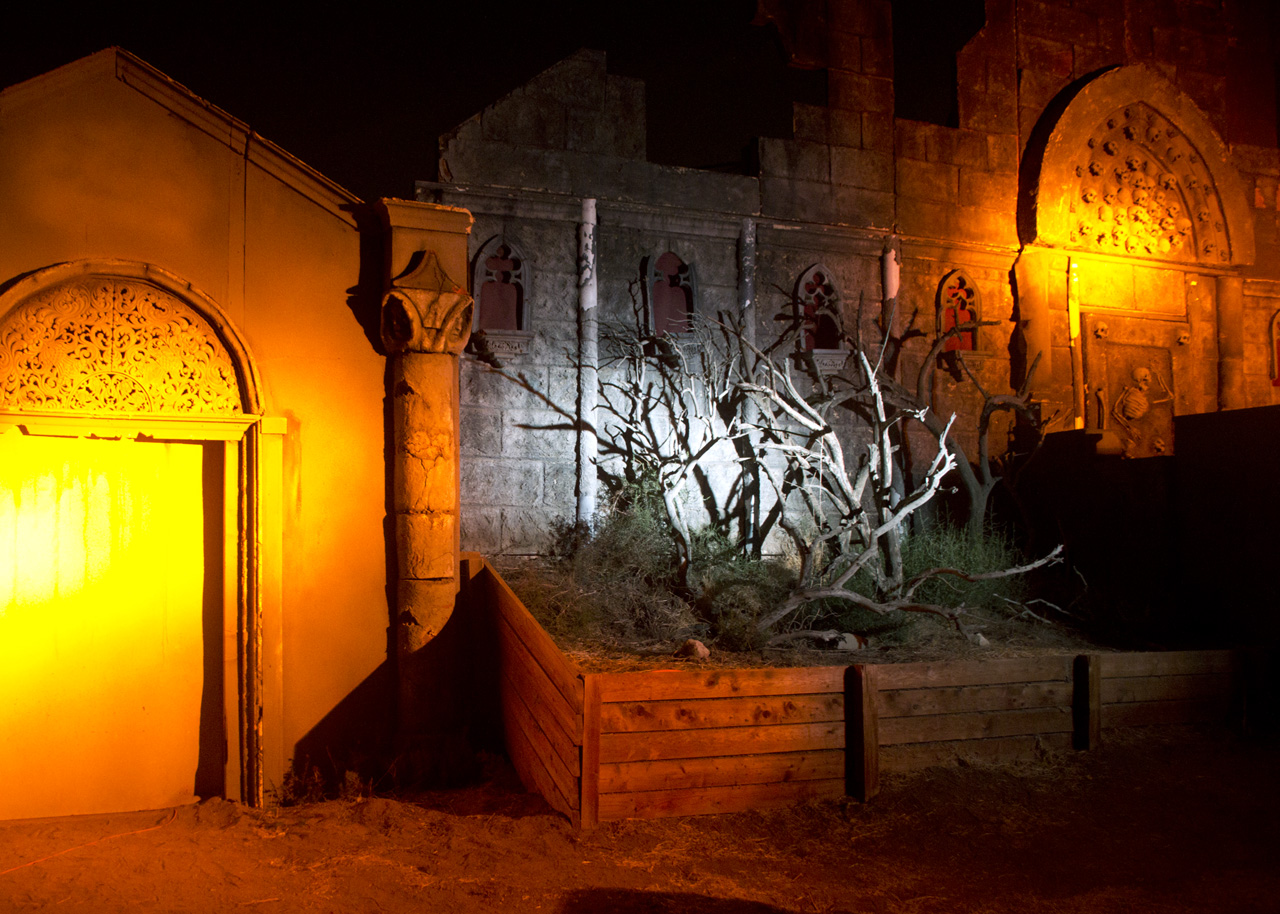 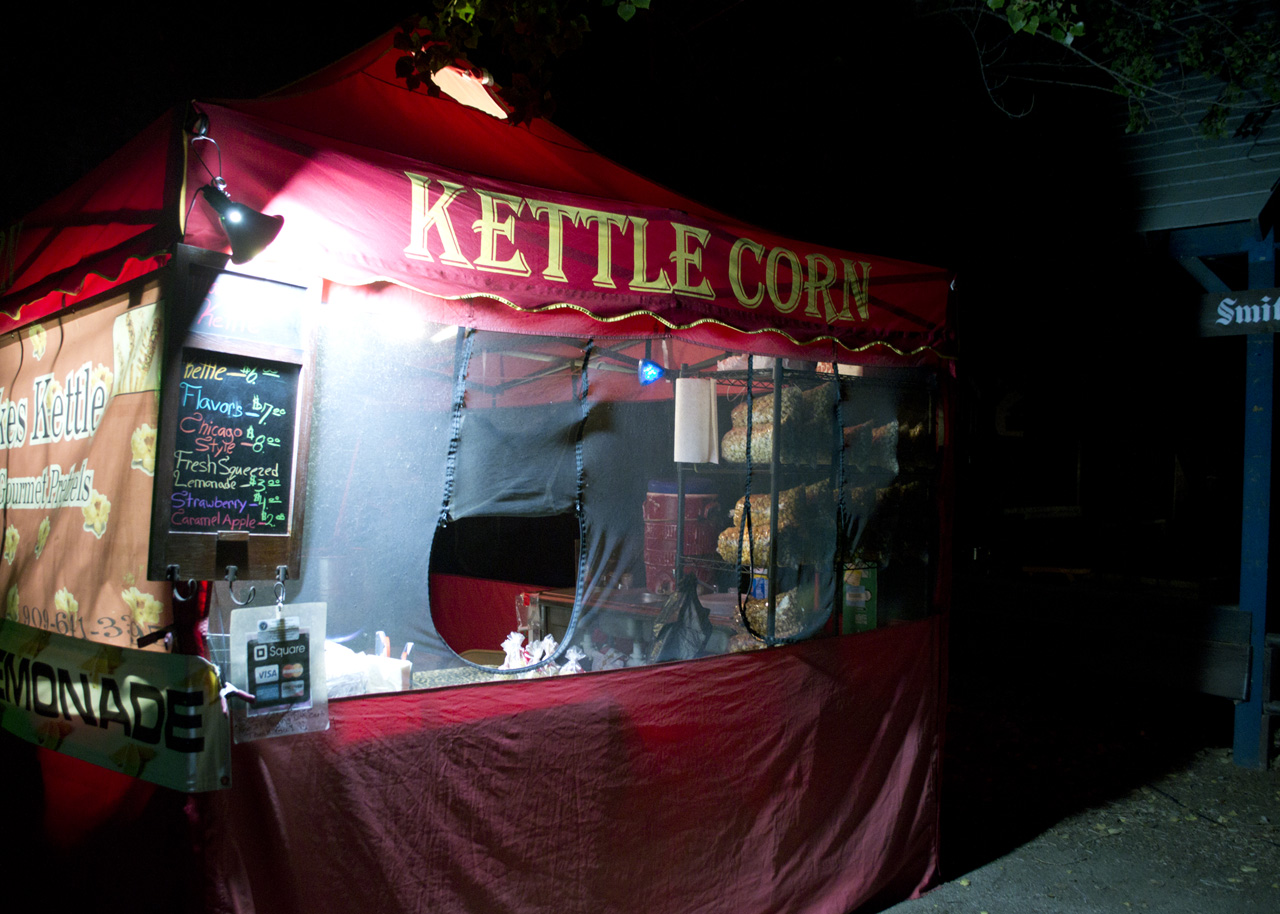 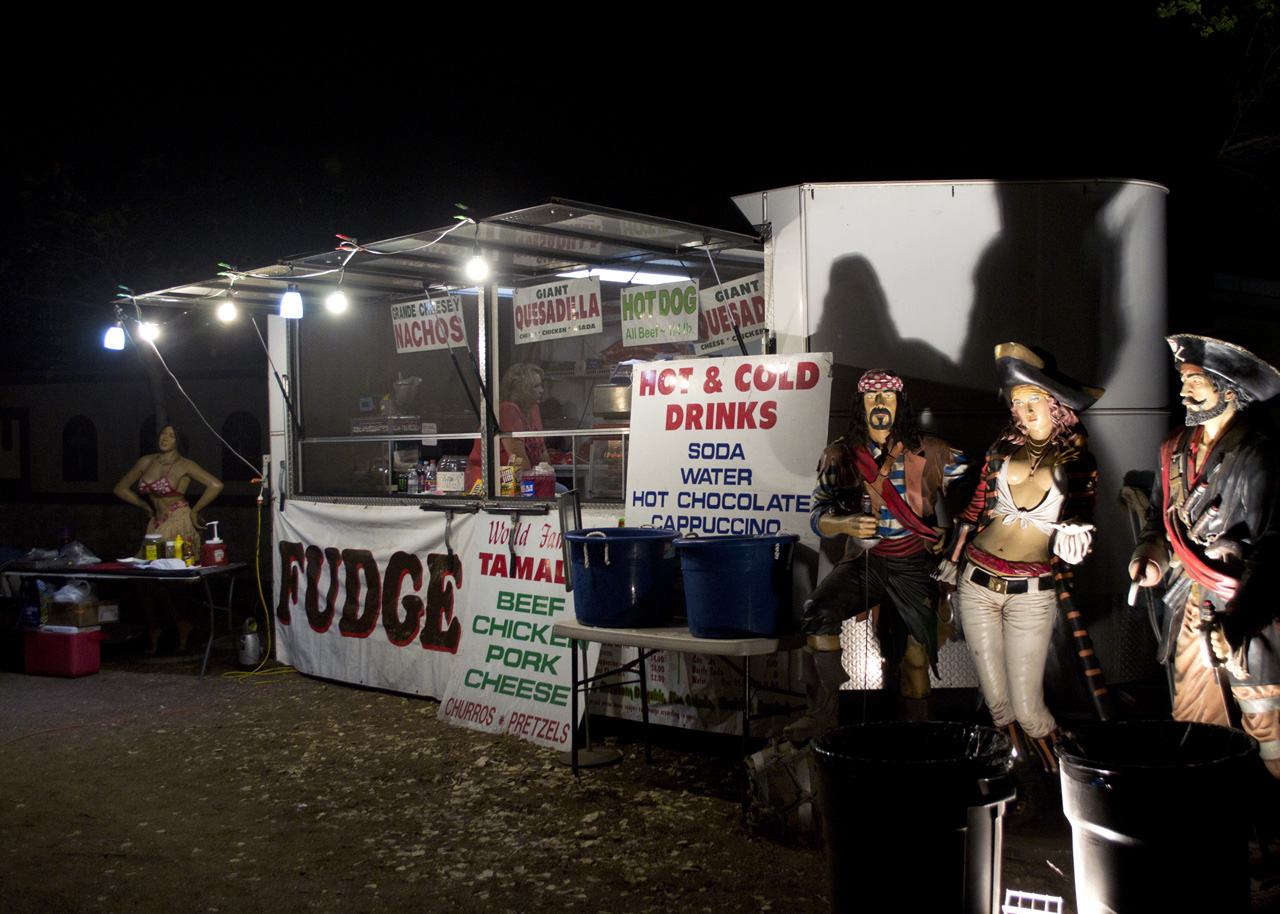 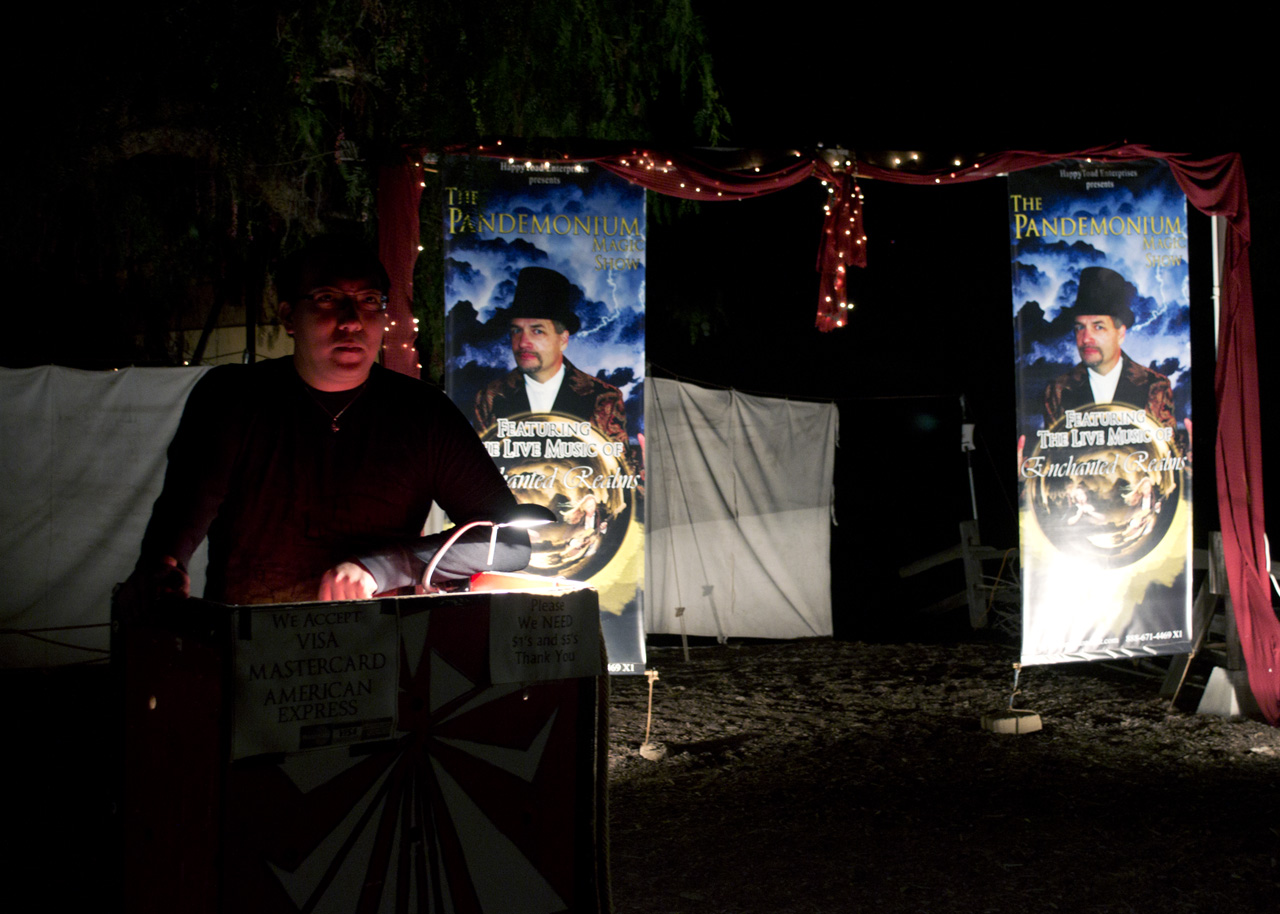 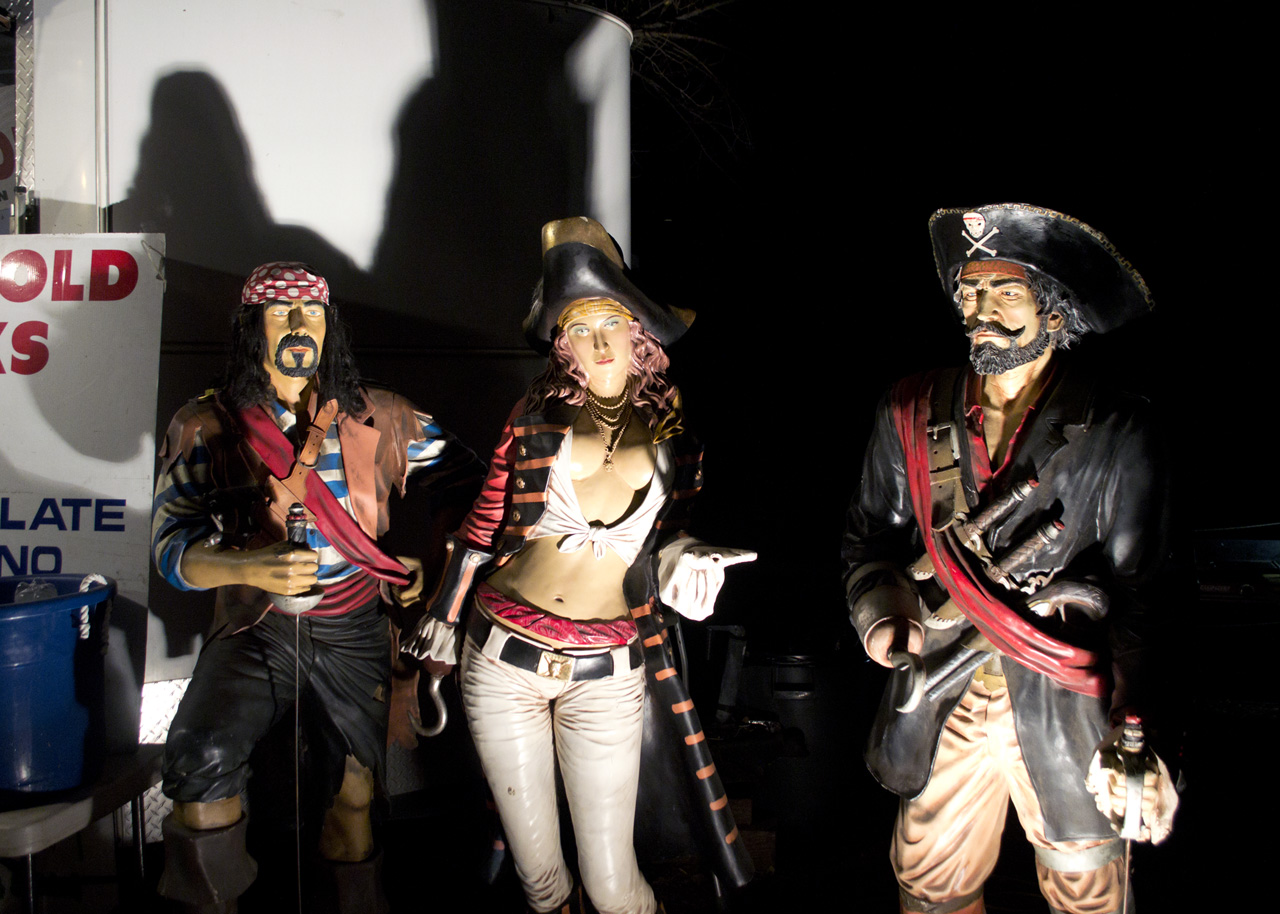 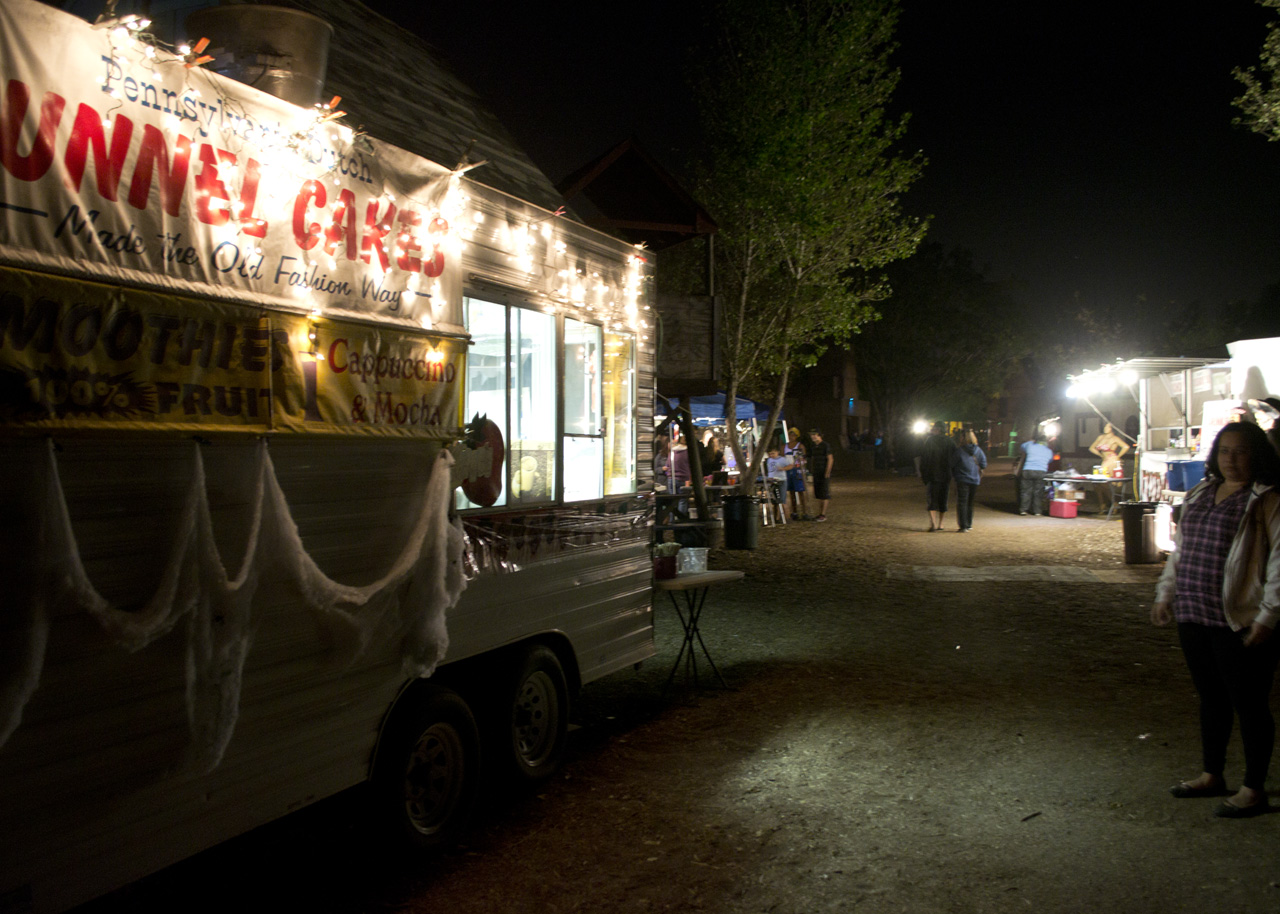