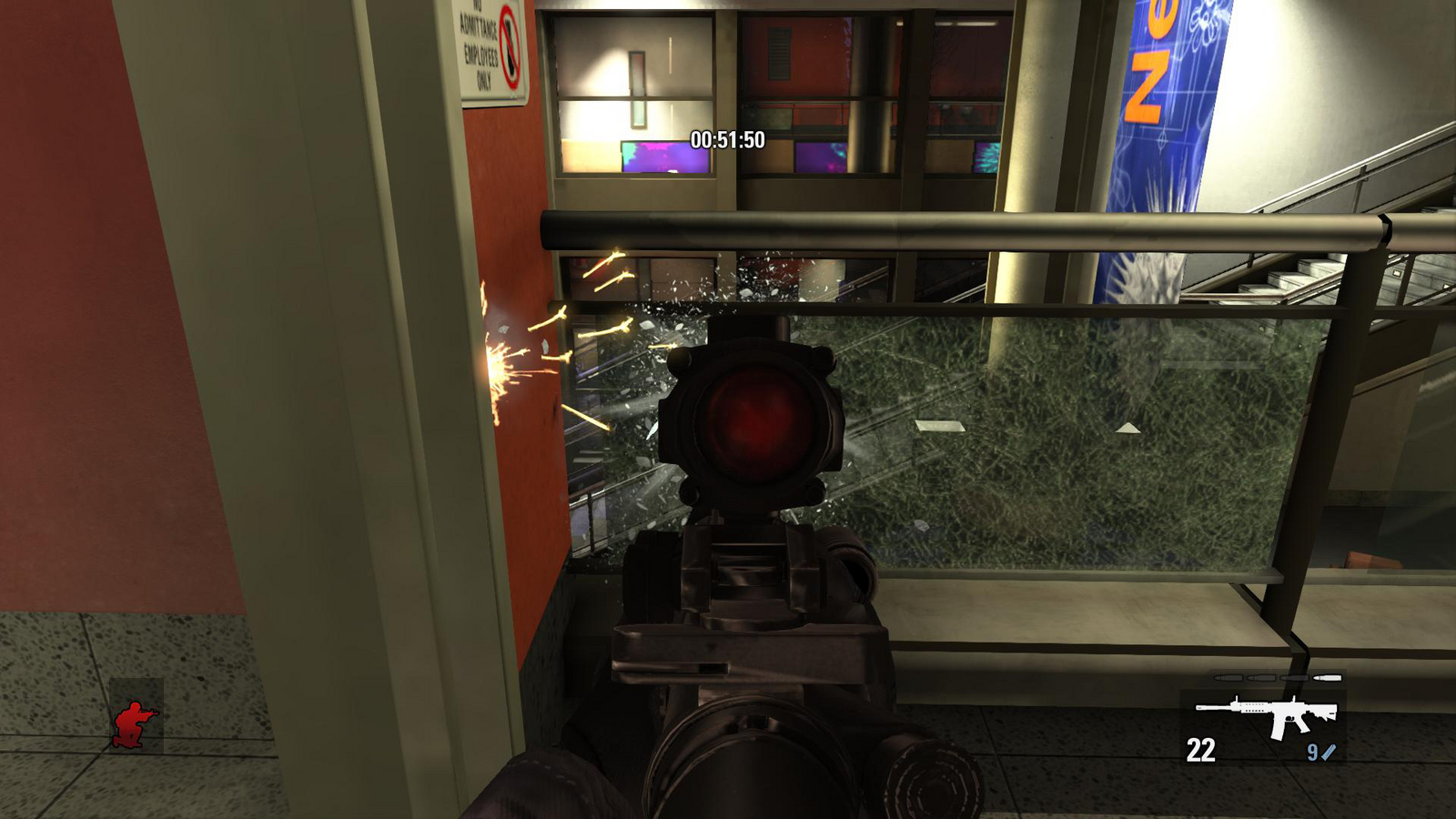 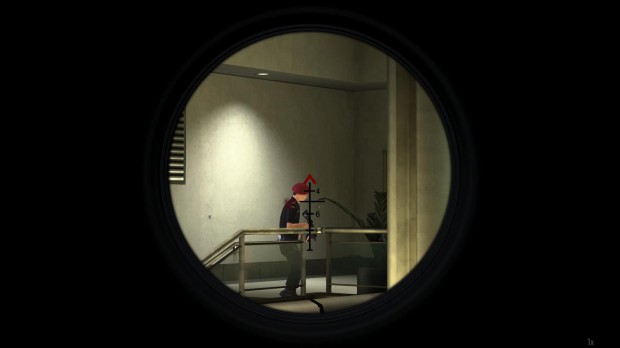 There’s a time to run and gun, then there is a time to think and shoot. First Person Shooters are not all made the same, regardless of those who try to play them that way. Some are made for players to charge forward recklessly, popping from cover to cover and expending more ammo than in a Rambo movie. Others are designed with finesse in mind – you pick the perfect silenced weapon, watch the patterns of guards, only break concealment when absolutely necessary and if at all possible clean up your mess afterwards. These are often referred to as strategy shooters and are often the bane of run and gun players. The strategists have no problem with a level taking hours to complete, breaking down the puzzle of enemy placement and movements, having to start over again and again because the enemy’s aim is true and shots are brutally effective. No healing over time, if you take one shot and live you are lucky, don’t expect to take a second and stay standing. For such serious strategy shooters Takedown: Red Sabre is the game for you.

Takedown is a thinking-person’s shooter.  The player that takes things slow, aims carefully, and plans their moves right will overcome the player who runs in with guns blazing.  Close-quarters battle brings the fight inside, as you would see SWAT teams or SOF units taking down small numbers of dangerous adversaries.  Non-linear environments allow for multiple routes and tactics and add replayability.

In recent years, shooters have become homogenized.  There used to be a wide range of different games to choose, from run-and-gun action titles to slow-paced tactical shooters focusing on strategy and tactics, but now most shooters follow the same model of big set pieces, regenerating health, linear levels, and “cinematic experiences.”  The realistic tactical shooters with in-depth planning have almost entirely disappeared in recent years.

This game focuses on realistic weapons modeling, squad based play, in a close-quarters battle setting.  To succeed in this game you need to take things slow, study your environment, and execute flawlessly.  If you get shot, there are consequences.  You won’t be hiding behind a wall waiting for your health to regenerate.  If a team member goes down, you will have to assess the situation and reallocate team members if necessary to complete the mission.  Don’t expect all of the tools and plans to be forced fed to you – it is up to the player to ensure their team is equipped and ready for the tasks at hand.  With features such as realistic bullet penetration, accuracy, and recoil, choosing the proper weapons, ammunition, armor, and gear for the mission is up to you, so choose carefully. 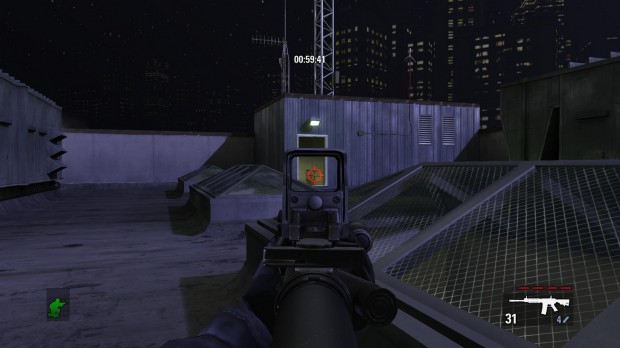 Gameplay modes include single player, co-op, and competitive multiplayer.  If you are a fan of old school shooters where thinking meant more than running and gunning or perks, or if you are just looking for something different in your shooter games experience, this is the game for you.

I had recently been playing a very fun run and gun game, so when I first started playing Takedown: Red Sabre it hurt, a lot.  It took me a few tries to get out of the mindset of keep moving and shooting and into peek and sneak mode.  I quickly checked out my character’s equipment loadout so I would know what I was working with, then jumped into the first mission.  My entire team was dead in minutes.  Not good, I thought, maybe I just need to shoot faster.  Nope – dead again in minutes.  So then I increased my armor and gave it another chance.  I lived through the first shot but suddenly I was swarmed by enemies and down went my poor team again.  It was about this time that my mind said “hey dummy, maybe you should rethink what you are doing.  You can think right?”  Right.  So, I looked at the specs, my higher armor made it so that I was slower and made lots of noise moving, light armor was silent but one hit and you are toast.  All weapons have silencers available which help with quieter kills but make your barrel longer and harder to swing around doorways.  I made adjustments and moved in… and all the enemies were in different places.  Randomization, check.  It goes on like this as you learn the game’s make up, the strengths and weaknesses of the weapons, items and armor and which team member you want using what.  The game boasts realistic ballistic damage, weapon recoil, scope sway and collision issues such as barrels being forced up or down upon hitting walls or door jams. 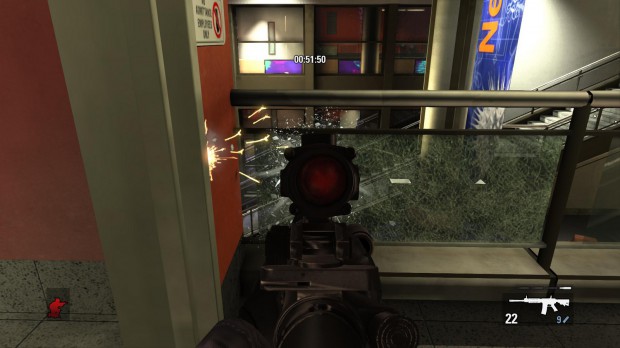 All enemies are spawned at the beginning of a match in random placement with random weapon and armor, the environments are non-linear and the objective locations randomly spawn at possible predetermined locations at the beginning of the match.  Surfaces have penetration values so taking cover behind a wooden crate will have less effectiveness than a steel door.  If you manage to get lucky enough to just get shot in the arm your weapon handling will decrease, if you get shot in the leg your movement is effected.  The game strives for the greatest degree of realism possible with every level having a high replayability because of the complete randomization involved.  Ammo types comes into play and there is no HUD for kills or map location, just a small figure in the corner that lets you know if you are hit and whether you are standing or crouching.

If playing isn’t enough then you can even build your own killhouses using the Unreal 3 Engine and the Unreal Development Kit and release them upon the community.  On the same note the community can build killhouses and put them on servers to test your steel.  You can play the game multiplayer as well and see just how much your really need to work as a team to survive, no heroes allowed.

It is possible to go on ad nauseam with how much the folks at Serellan were striving to make this game as strategically challenging as possible while at the same time maintaining realism every step of the way.  If you get frustrated from dying in a game, this isn’t the one for you. The same goes if you like to run and gun through a shooter, then sit behind a crate to wait for your “shields” to recharge.  Takedown: Red Sabre prides itself in making you think beyond trigger reflex and giving you the closest thing to realism outside of a real SWAT team.
[easyreview title=”Takedown: Red Sabre Review Score” cat1title=”Overall Score (out of 5)” cat1detail=”” cat1rating=”4″ ]