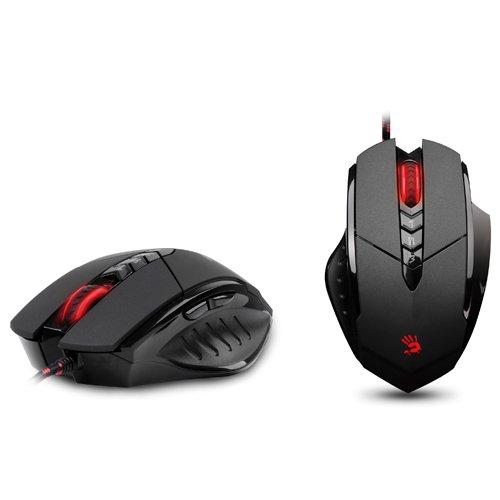 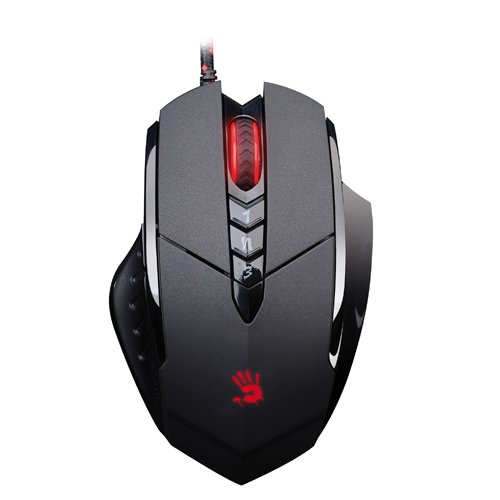 While at this year’s Electronic Entertainment Expo, I got approached by a rep from A4Tech to review one of their “Bloody” PC gaming mice. With an eye-catching, bloody hand print logo on the side of their booth, I had to agree and check one out. After having the chance to use the mouse for a few weeks, my report is, for the most part, a positive one. Retailing for roughly $40 dollars at sites like Amazon.com, the A4tech Bloody V7 gaming mouse packs quite a few novel features into its design.

The first of its unique features is that of its three “Core” buttons, located underneath its middle mouse button. The first setting/button is called “Core 1” and, in this mode, the mouse functions as a normal gaming mouse. Activating the second Core button enables the mouse to burst-mode where pressing the middle Core button fire two shots instead of one, and the third Core button fires a three-round burst. Obviously, this mouse is geared for shooter games. These burst mode operations actually work rather well, and reminds me of the “Turbo Buttons” from the NES Max game controller for the original Nintendo Entertainment System. The third Core operation is where the controversy surrounding this mouse comes into play. In this mode, you are able to manipulate the recoil effect of firing your virtual weapon on the mouse cross-hairs – both stationary and when strafing around. Some gamers will argue that this presents an unfair advantage to users of this mouse as “Scout Mode” did for users of certain Creative Labs sound cards. Are they right? Well, that’s for another article. The important thing in talking about this feature with the A4tech Bloody V7 is that it actually works. It takes a lot of tweaking to get it just right but, once you do, you WILL notice that recoil will not trouble you like before.

The most annoying features of this gaming mouse comes from its pay-for-more Core 3 software functionality. You do get the Core 3 functionality as a free trial at first, good for 1,000 clicks. But, when that’s over with, you have to pay an additional $20 dollars to keep using it. This is NOT the way to market a gaming mouse to Western Audiences. I would much rather have seen A4tech add a few dollars onto the price of the entire mouse, which retails for only $40 dollars, and give you the full functionality.

There is another feature that brings a lot of value to this mouse, and that’s the dust cover which protects its 3,200 DPI sensor from getting obstructed. It doesn’t seem like this would be all that amazing of a feature, but it’s something that many gaming mouse-makers do not have on their models, so it is worth mentioning. Additionally, the mouse features a no-fray, braided cable which is always nice to have.

Overall, the A4tech Bloody V7 gaming mouse is very good at performing its “Core” functions and providing an edge to the user – once you configure it properly. However, the pay-to-play business model that the company has included in this mouse is a real turn-off for gamers – especially when it is not advertised very well that you will need to pay extra on its box. I am awarding this a 4 out of 5 ONLY if you purchase the added functionality. Without that, I would have to rate it as a 3 out of 5.