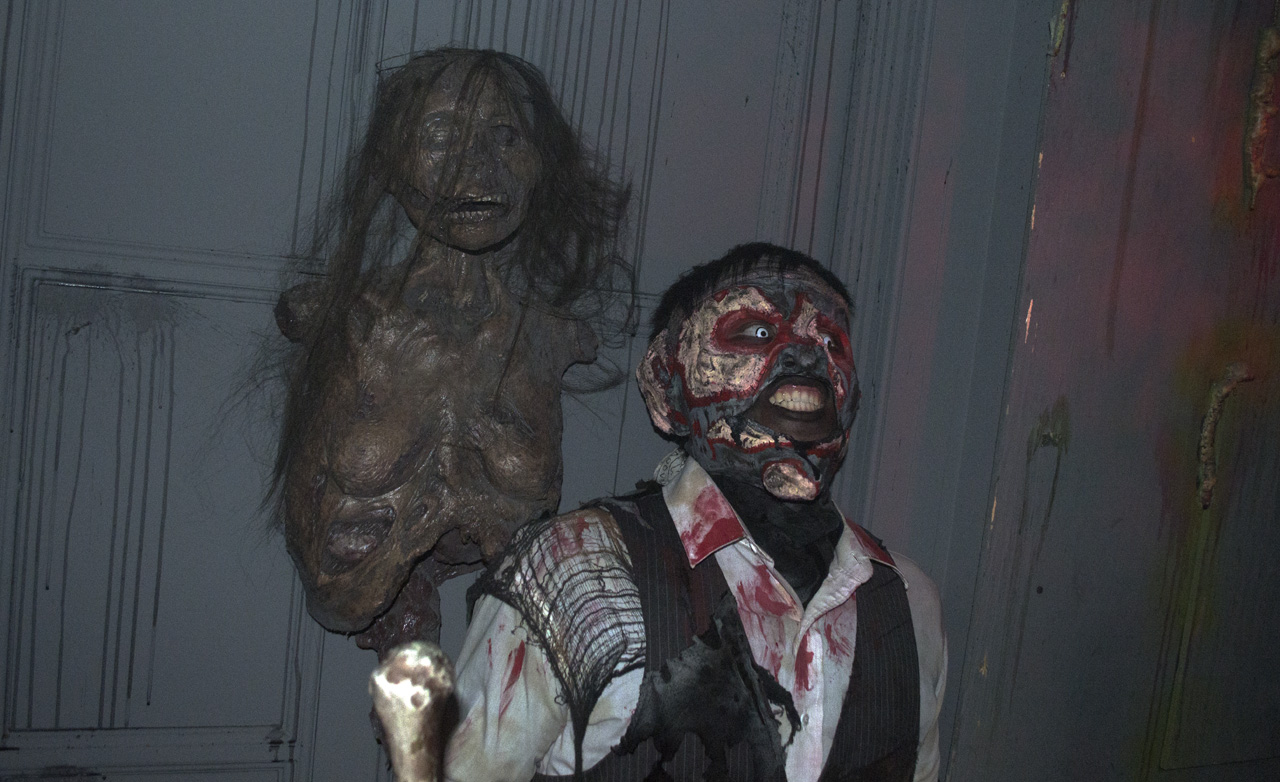 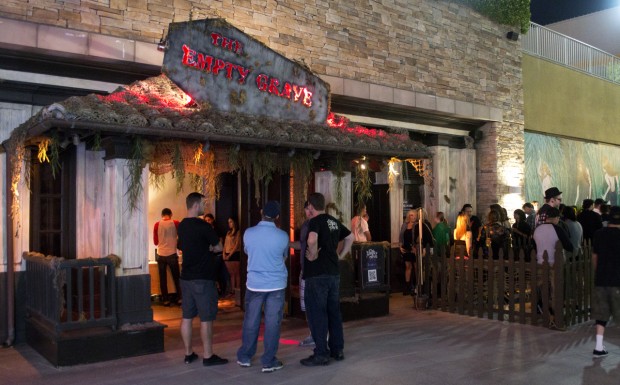 Halloween comes early to Southern California as The Empty Grave haunted house is now open at the Anaheim GardenWalk outdoor mall – located in Anaheim, CA. The Empty Grave has been a Southern California haunted house staple for many, many years and is the brainchild of Mike Talarico. Why is this haunted house open so early? According to Talarico, The Empty Grave moved locations within the GardenWalk (which is now under new management) and was offered a coveted space at the former Hollister Co. store if they opened up early in an effort to garner the center some additional end-of-Summer foot traffic. The Empty Grave is open Fridays through Sundays from now until November 2nd (the last two weeks have some additional nights as well).

Upon visiting The Empty Grave’s new location, we were very impressed with its exterior. Utilizing the remains of the former Hollister Co. store, the store front has been turned into a rundown, abandoned family mortuary. We went inside the front doors to pick up our tickets, and then proceeded to the area near the maze entrance. The line was already filling up and I am glad we got there relatively early. Ticket prices for the introductory night were only $7 dollars each – however, ticket prices are now at their normal $13 dollar price point. Additionally, you can buy two tickets at a deal of $20 dollars for the pair. 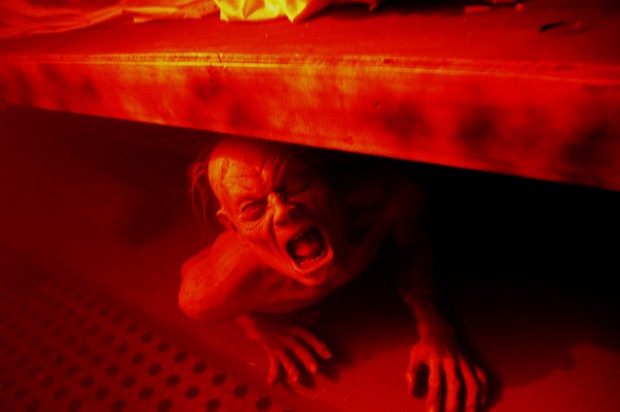 We entered the maze entrance of The Empty Grave and were escorted into a dark room. Here, we were treated to the story of the maze via an audio track. In our walk-through, this audio track was a bit low on the volume, but we were informed that this issue will be correct soon with a louder audio track. Once completed, a pair of curtains ominously parted for us to continue our journey and off we went into The Empty Grave.

The maze’s new location is simply stunning – not only with the amount of internal space but, also, the amenities. The former Hollister Co. store had some seriously-efficient air conditioning and that kept us all very cool during our walk-through.  It also added to the overall experience as a rundown, abandoned mortuary shouldn’t be all warm and cozy, should it? In terms of art design and layout, The Empty Grave makes great use of space, sprinkling interesting set decorations and structures throughout. Additionally, the maze corridors are very friendly to those who require special access, and never seemed to get too suffocating. Scent effected used throughout the maze were set to just the right levels so that they didn’t stick with me for the rest of the night – a fact I appreciate greatly.

The various monsters inhabiting the event were visibly excited at getting the chance to scare again before the Halloween season usually begins, and I hope they can keep up that level of energy throughout the maze’s upcoming, lengthy-run. Upon exiting the maze, we were sufficiently spooked and very glad to see the excited crowd again, waiting outside to get in. 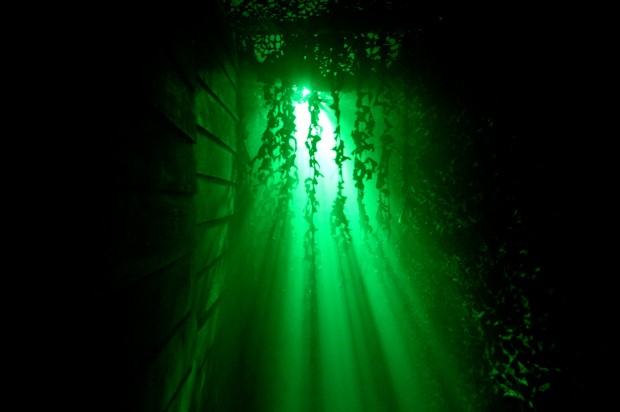 While we have tons of good things to say about The Empty Grave, the maze still has some kinks to work out. First, and previously-mentioned, is the initial audio voice-over. It needs to be a lot louder to be clearly audible for guests. Also, Mike Talarico told us that there were a few “BIG” effects that still need to be added to the maze. My party really didn’t notice anything missing, so I am excited to see what these big effects are. Talarico informed us that these effects would steadily be introduced in the maze running up to mid-September or so. This way, the experience changes over time, giving return customers new stuff to see and experience. The second thing that stuck out to our party was that, while they had a lot of energy, the volunteer talent inside the maze seemed “off” at times in terms of timing their scares or entrances. This is something that only gets better with time, however, as we attended their first night of operation and it was new to everyone.

If you are interested in volunteering at The Empty Grave as a monster, take note that the event is planning to hold auditions sometime in September, depending on how their cast is holding up. Check their official Facebook page for more information when auditions will be held. Also, be sure to checkout the Anaheim GardenWalk’s website for information on food and restaurants so you can plan some dinner after your scare experience.

Overall, we can’t wait to visit The Empty Grave again. Its cast and crew have consistently impressed us over the years and this time was no exception. Checkout The Empty Grave’s official website to pre-order your tickets now. The Halloween season begins! 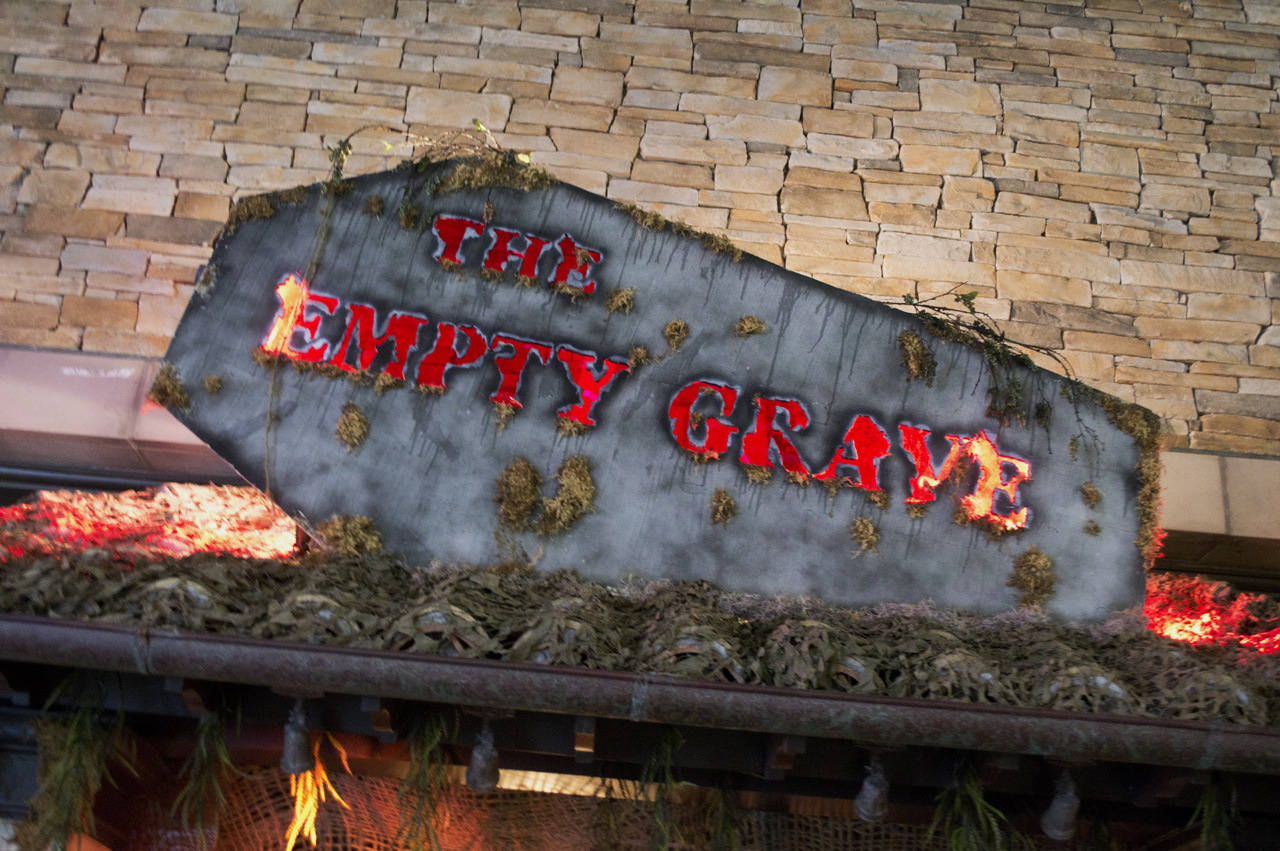 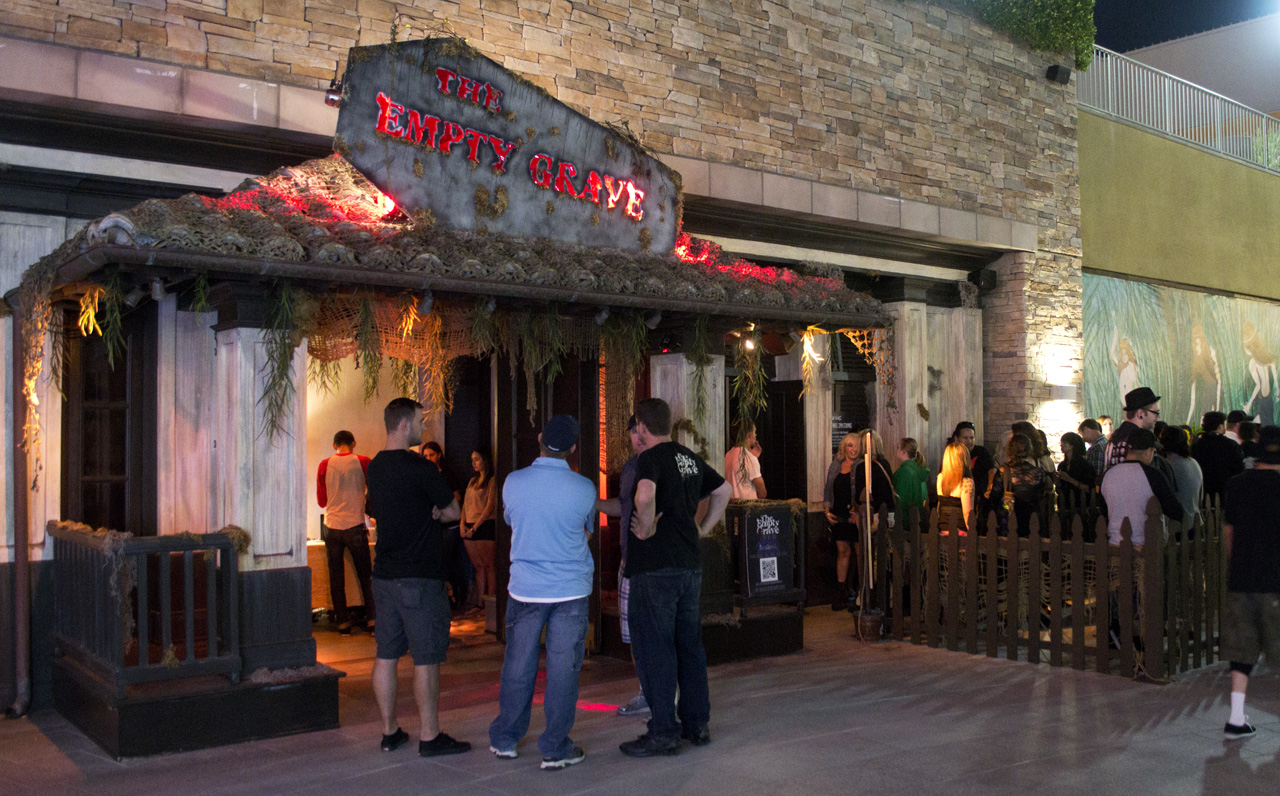 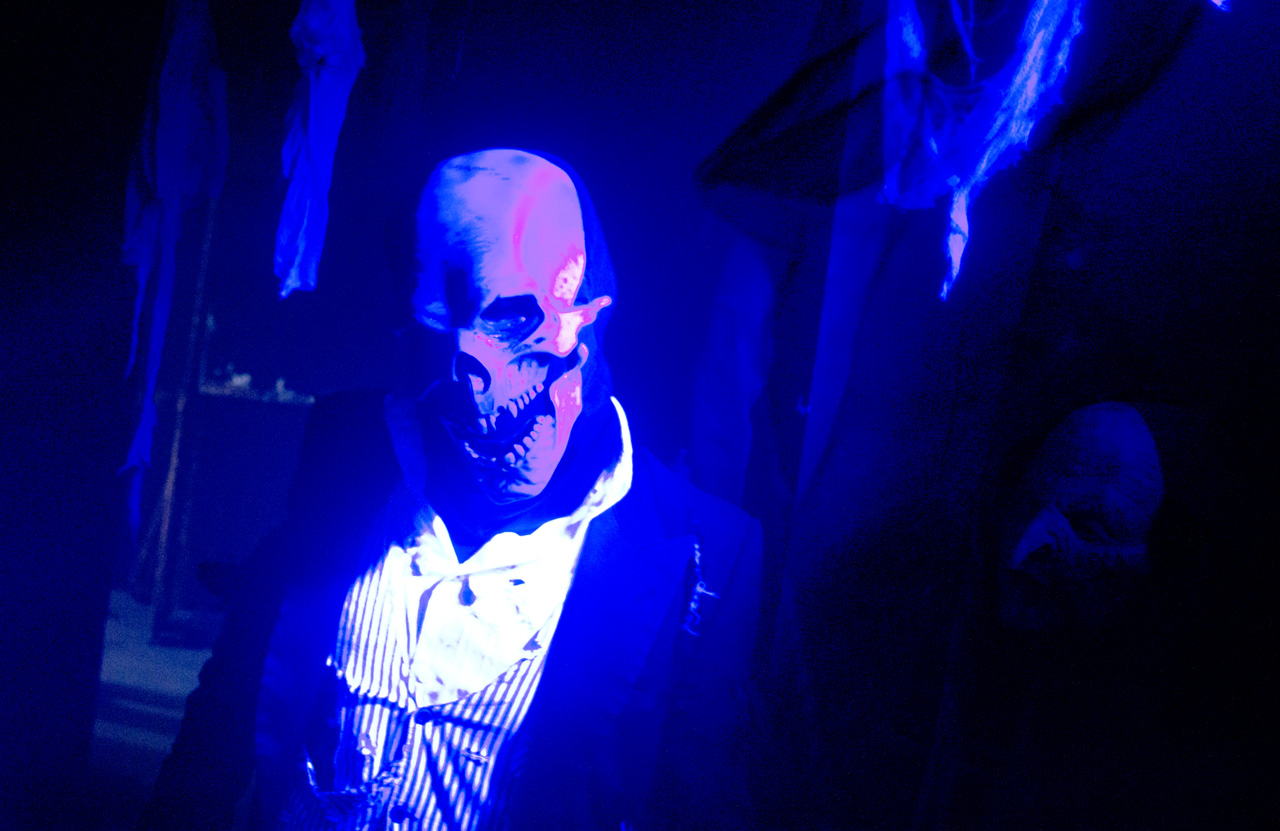 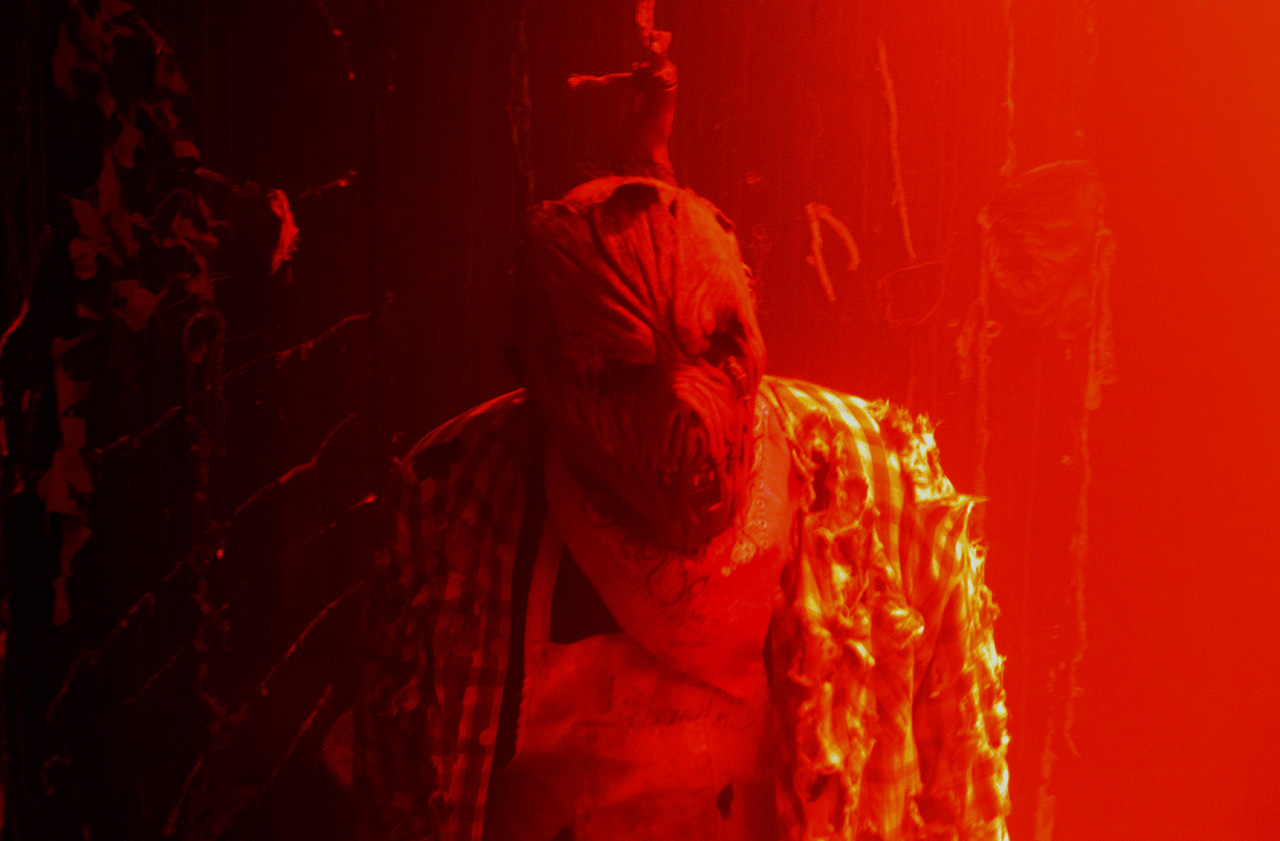 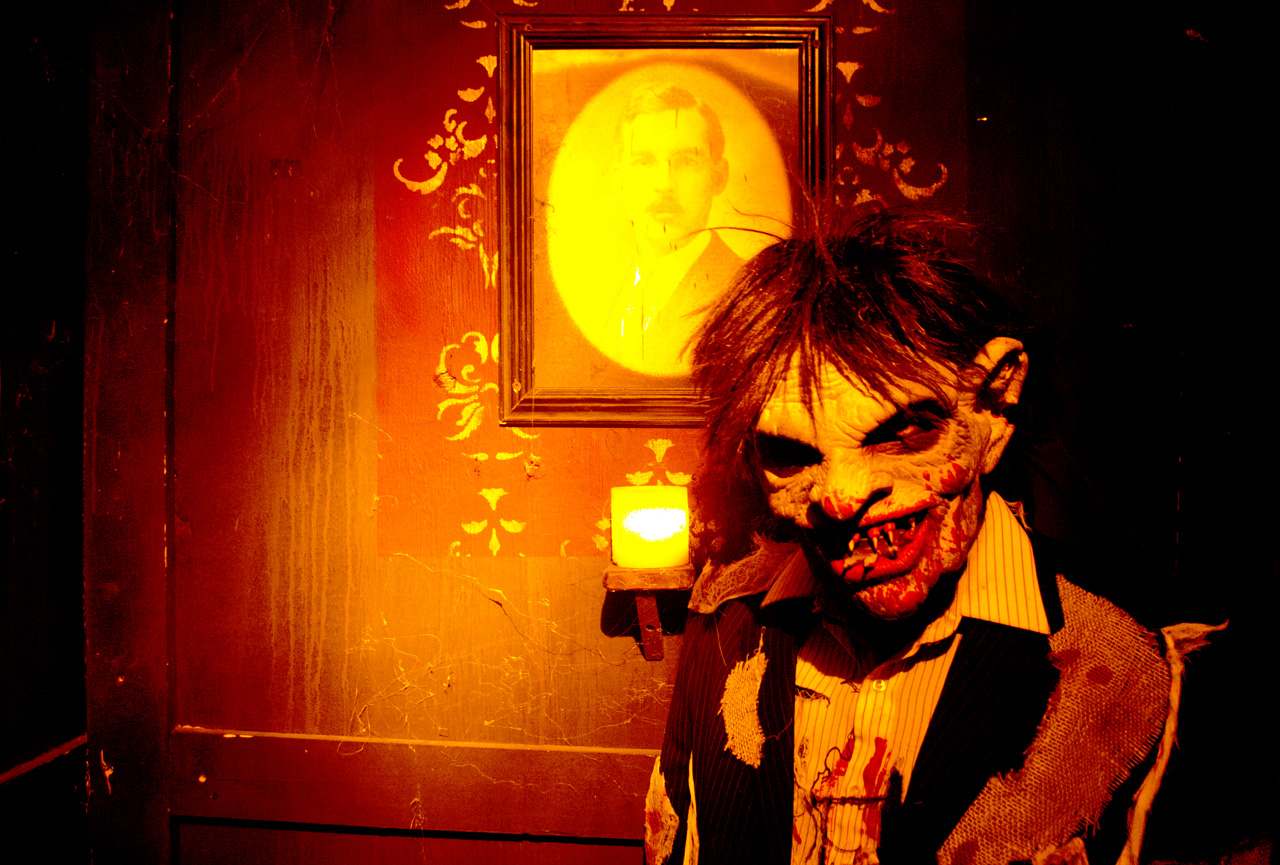 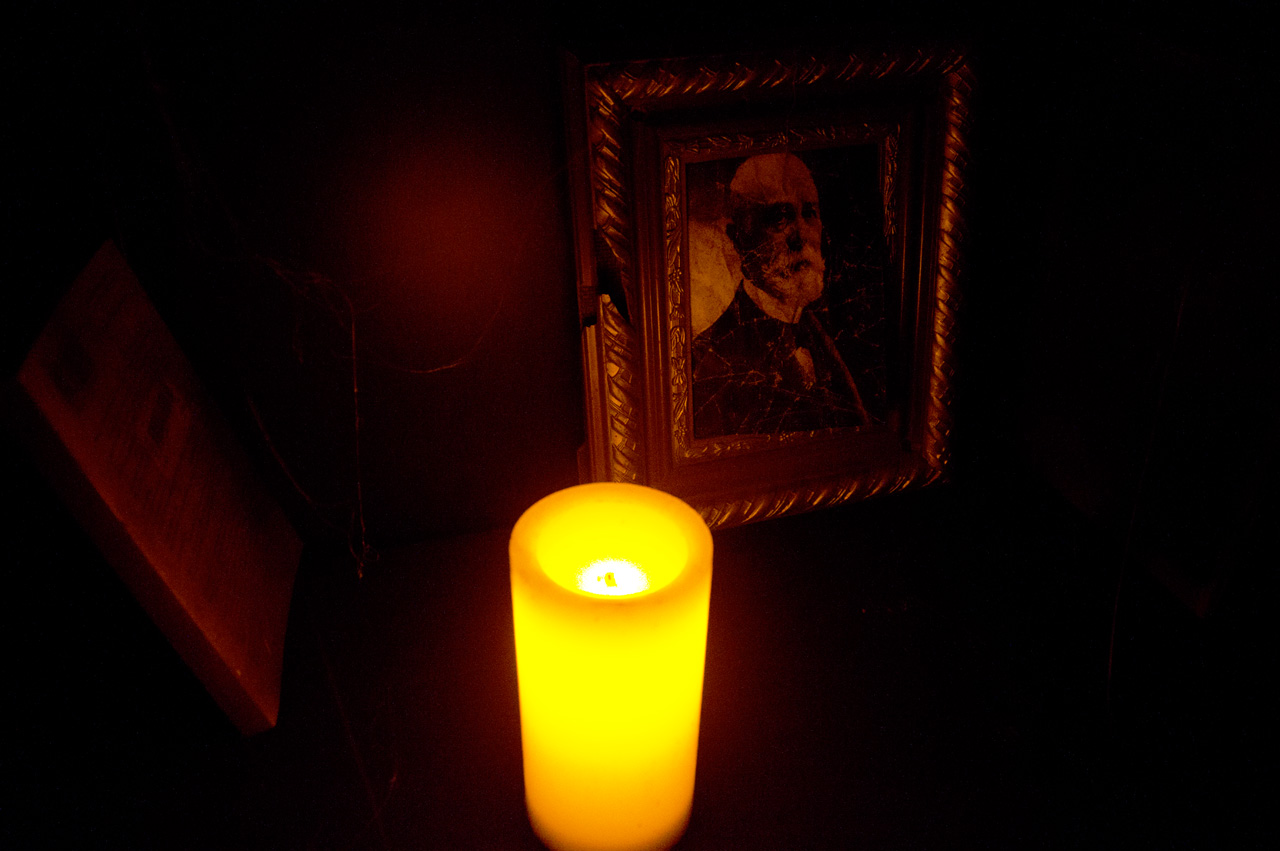 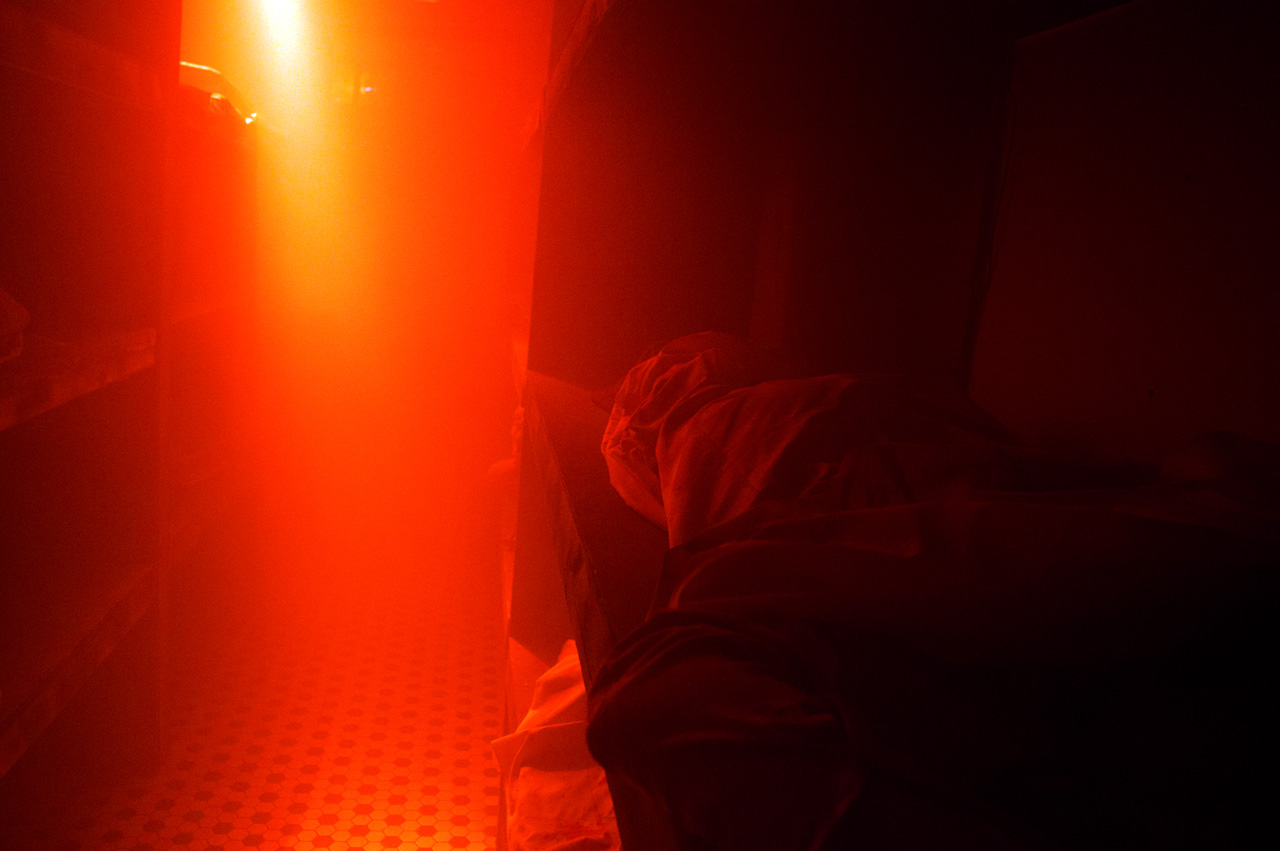 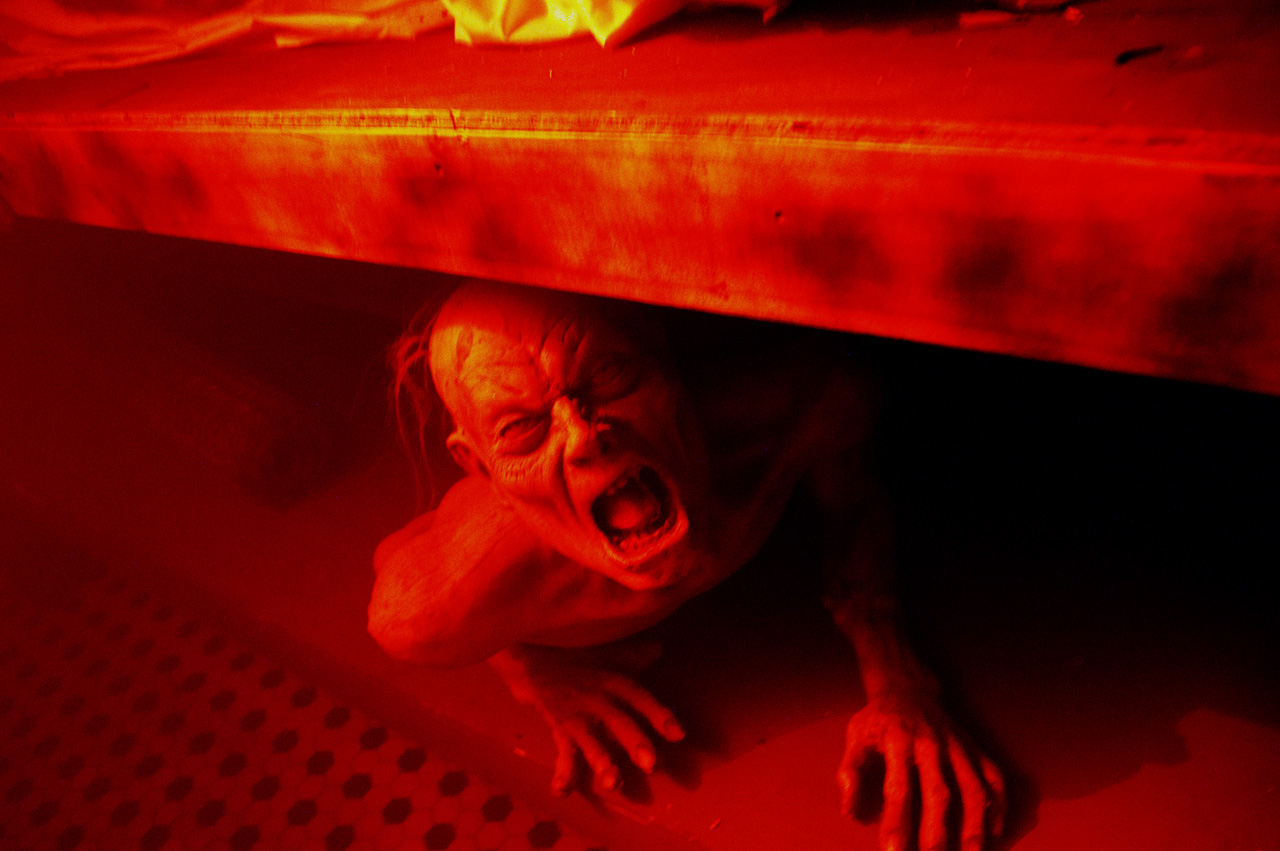 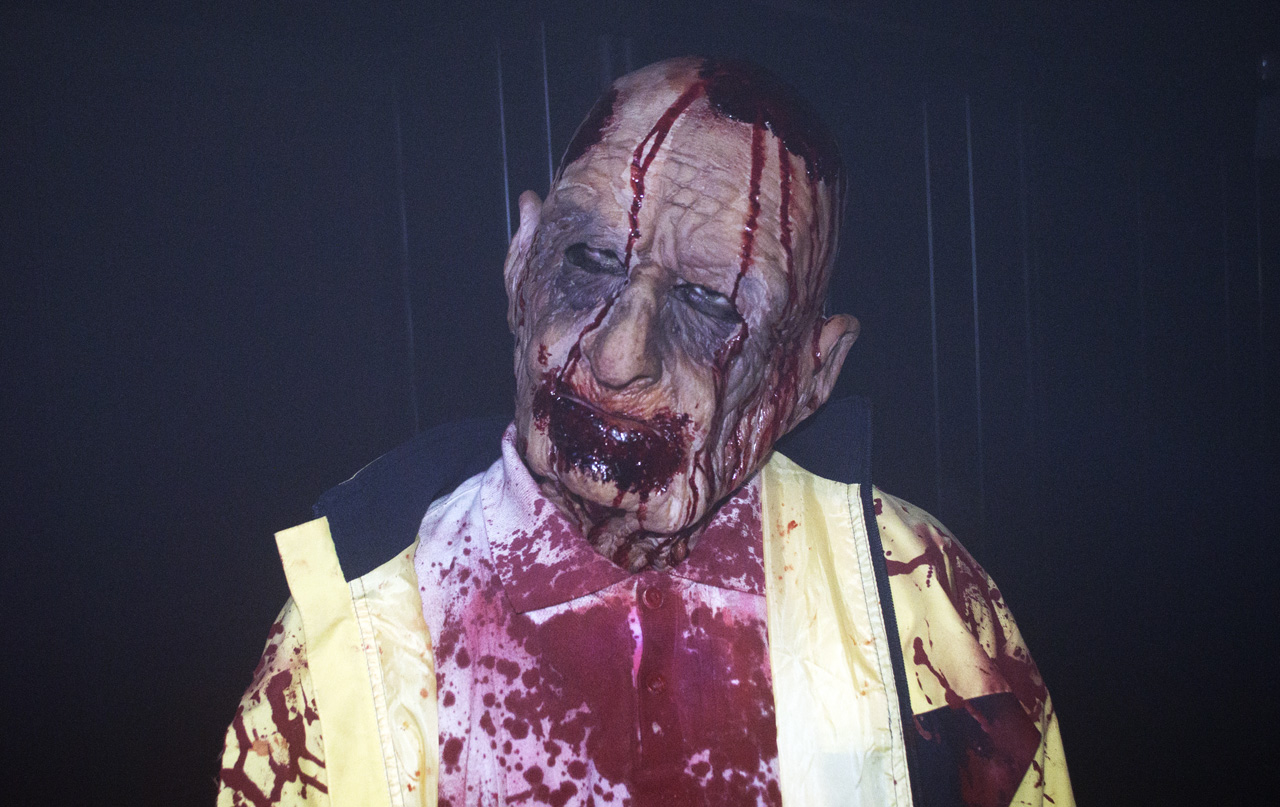 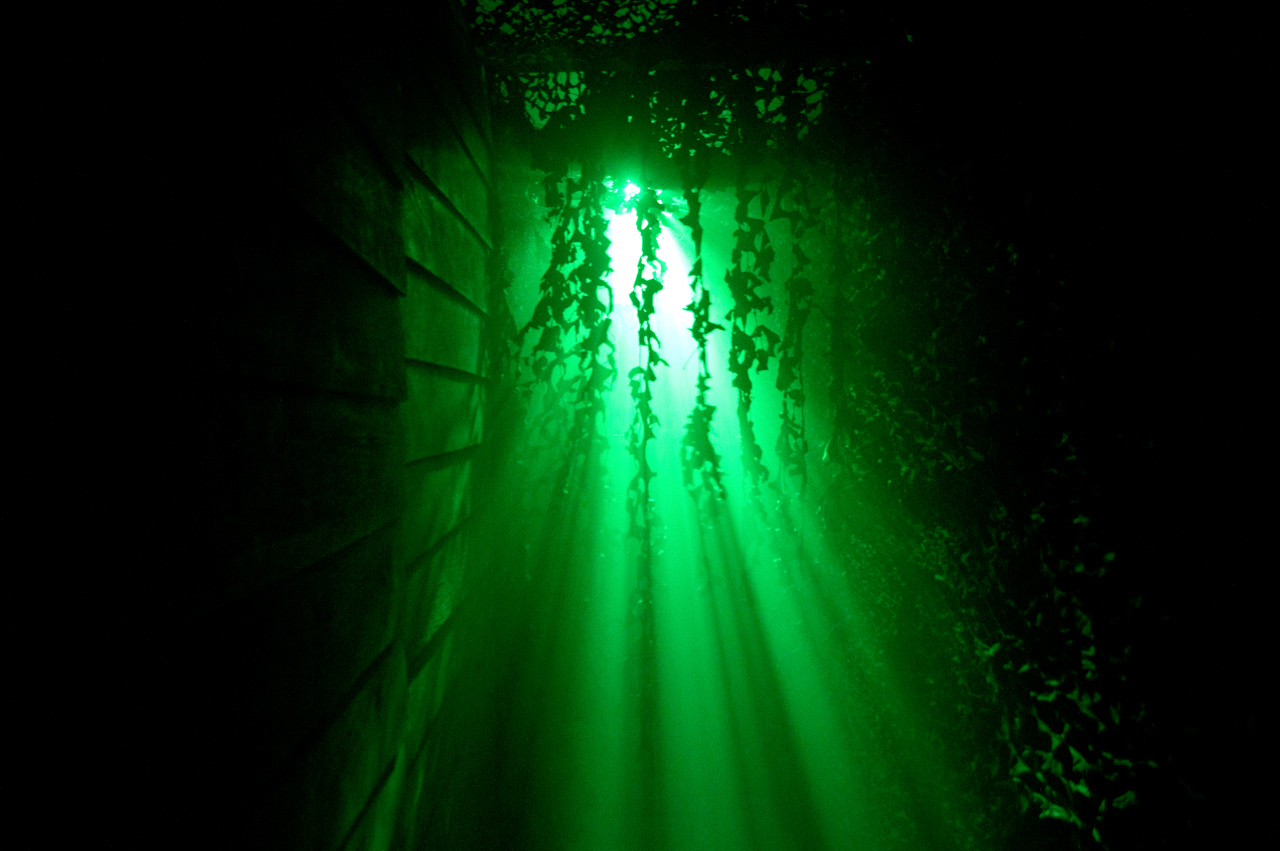 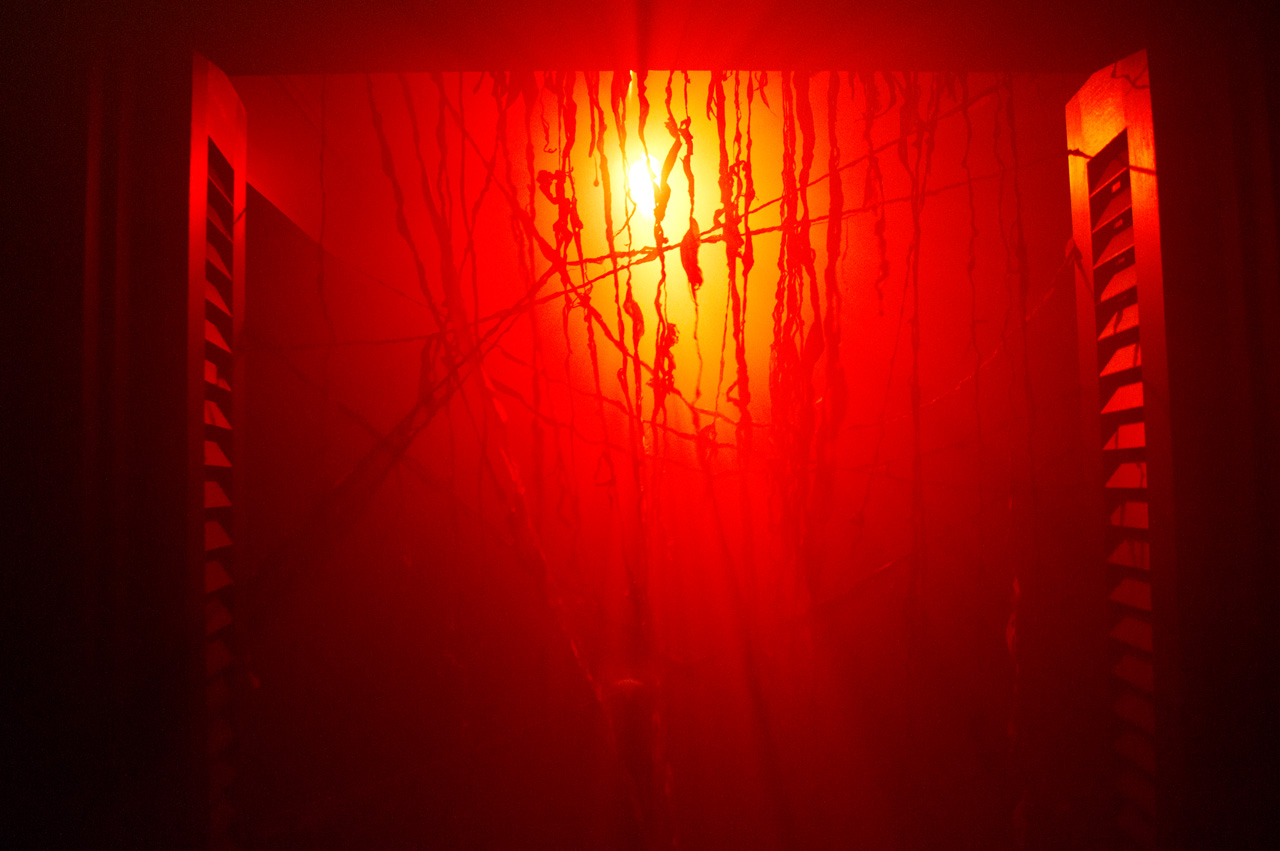 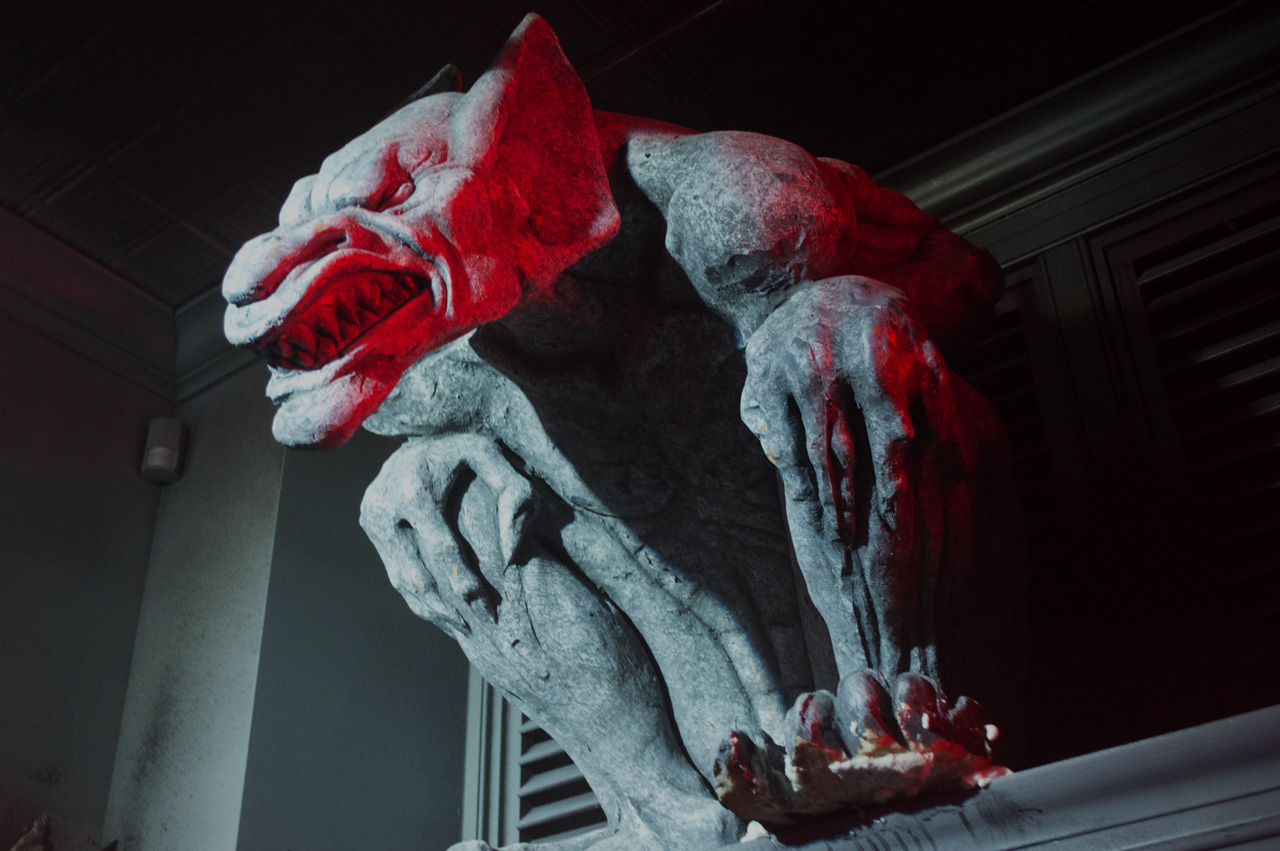 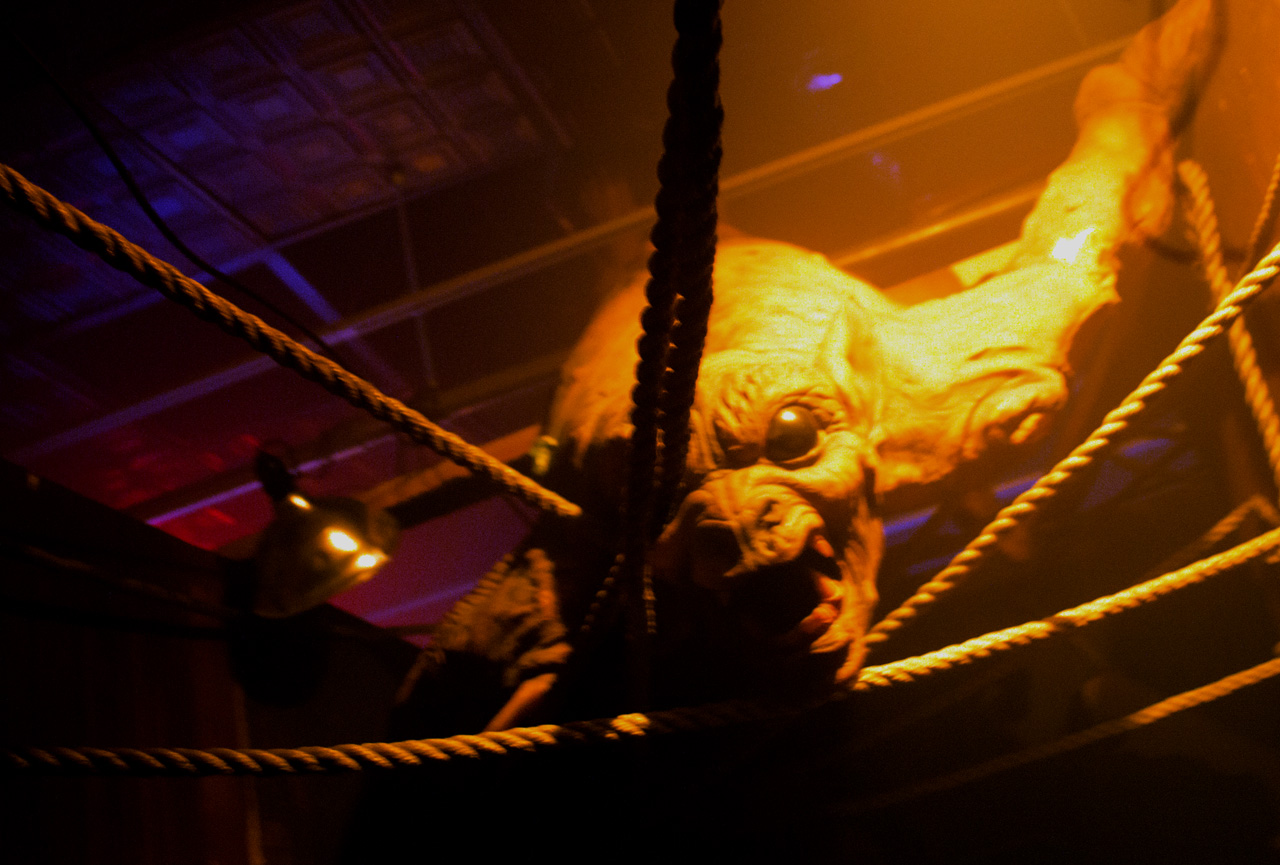 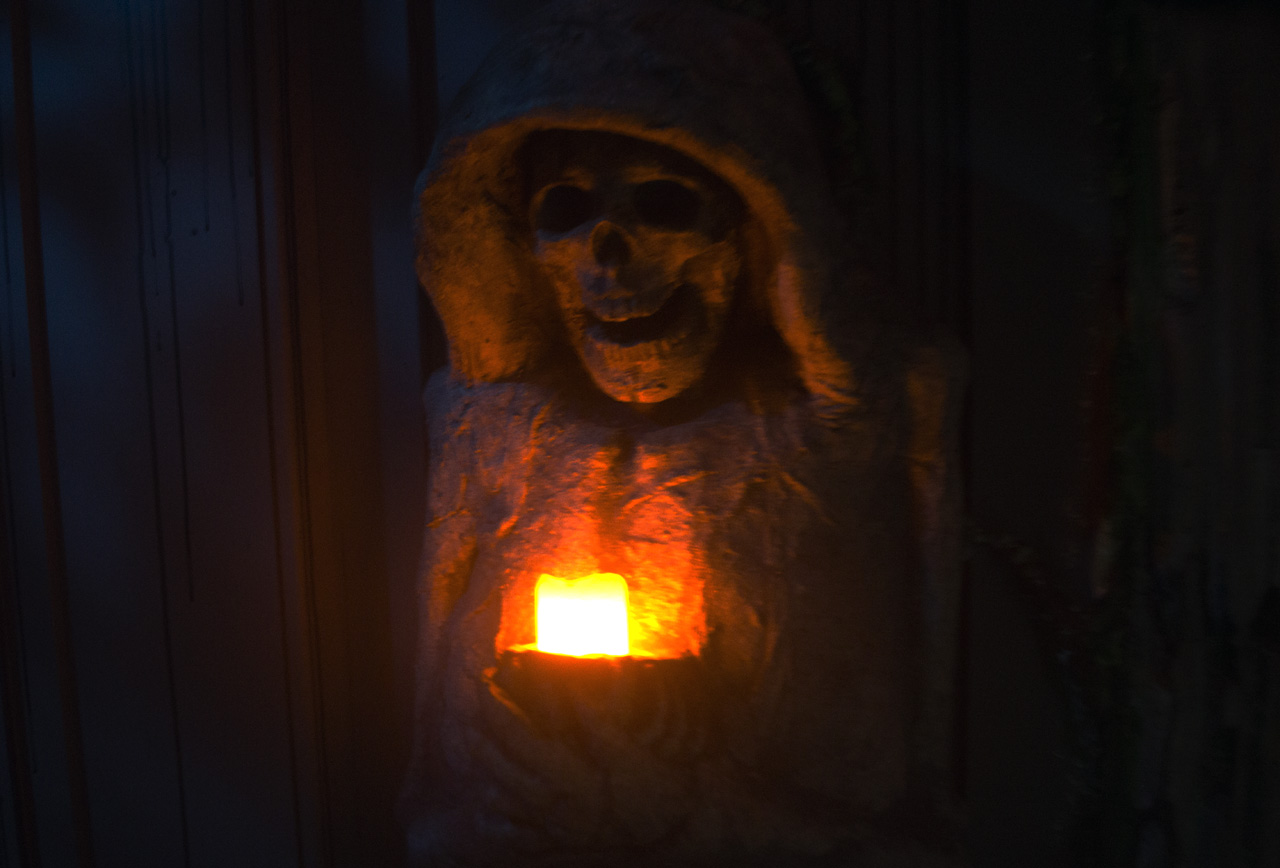 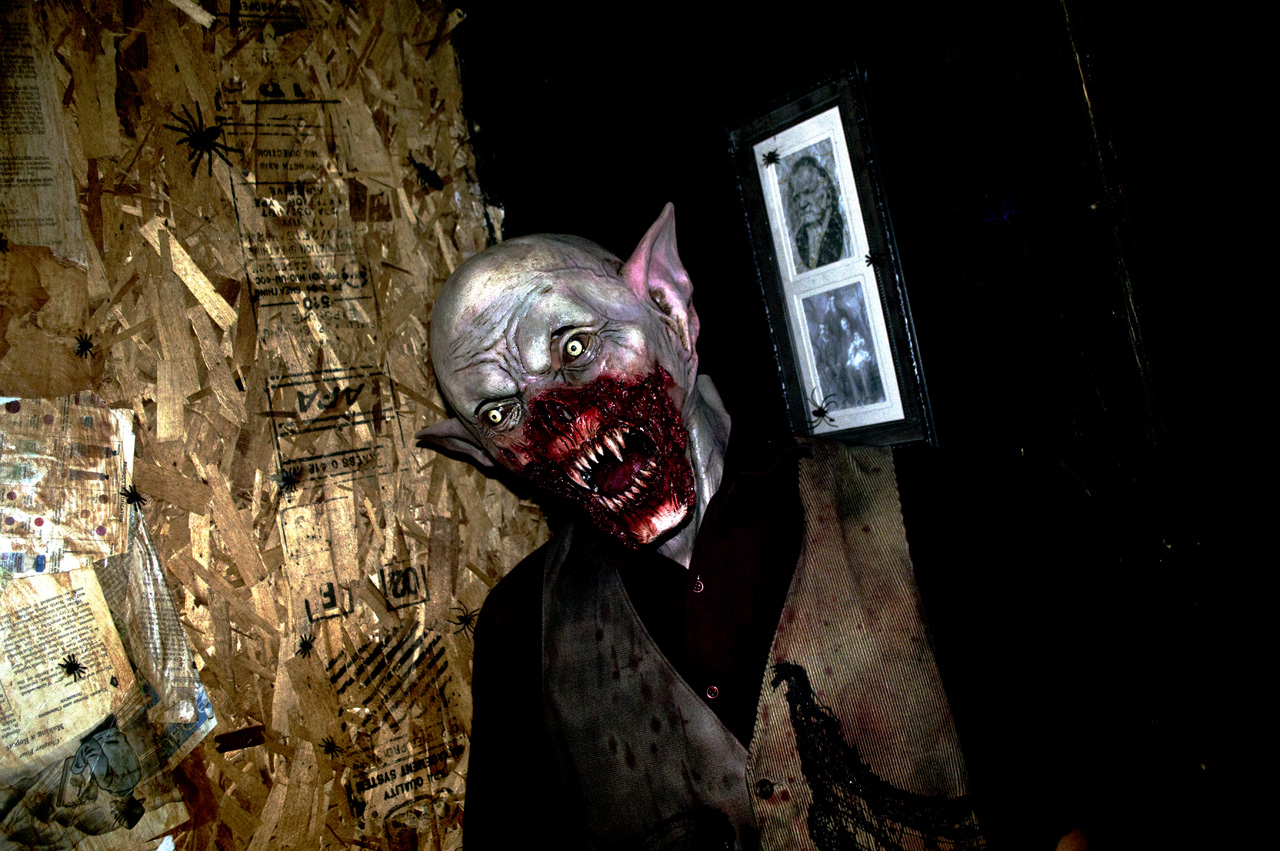