The folks at AirSplat were nice enough to loan us on one of their A&K LMG MK-I Airsoft SAW Machine Gun AEGs to review. I have always been interested in the role of the Automatic Rifleman or Support Gunner as it is an important part of a tactical fire team – laying down suppressing fire to allow the squad to maneuver and flank. This A&K support AEG is based on the M249 Squad Automatic Weapon, or “SAW”, which has seen service in some form or another with the U.S. military since the late 1970s.

At first glance, A&K’s M249 MK-1 SAW AEG is quite the looker, measuring in at 43 intimidating inches long as well as weighing about 15 lbs unloaded. The real M249 weighs roughly 22 lbs, so this is fairly close to accurate. This AEG features a retractable bi-pod made of an “okay” quality metal – not the most durable material I have seen but far from unstable. The bi-pod has three levels of elevation and makes for a nice pivot point to lay down fire from. Powering the gun is a battery which is held inside the handguard, underneath the barrel, which features a quick-release mechanism. Simply remove the barrel and the battery will fit into place without issue. Unfortunately, the battery A&K included with the package featured a bunch of dead cells and I could not power the gun for more than a few “lurching” sounds before it completely died. I inserted one of our own, working batteries and it ran without issue. Another great feature of this support rifle is the included box magazine.

Using the included box magazine was very simple. Slap in two AA batteries to run its feeding motor and fill the BB chamber with up to 2500 rounds. The box magazine slides and locks into place beneath the receiver and the feeding tube mechanism gets locked into the M249’s left side. It is supposed to, that is. In our model, the box magazine would not lock into place. It stayed in well enough, but I religiously kept checking it throughout our matches to make sure it would not slide out. The box magazine has a three position power switch. The center setting is “off” while the other to control the method of winding. One automatically winds BBs up continuously while the other is a sound-activated winder. This mode in particular is very important as, without it, you will put unnecessary wear and tear on your box magazine and could even break it. The box magazine, when set to sound-based winding, kept up very well when slinging a lot of BBs down range, only needing to be allowed to catch up a couple times during exceptionally-long bursts. If you don’t wish to use the box magazine, you can apparently insert AK magazines instead. I could not test this, however, as I do not have one on-hand. 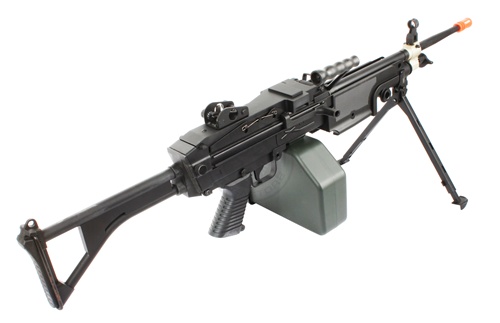 In terms of practicality on the field, this M249 was unwieldy to say the least, with no fore-grip to speak of. The overall configuration of the box mag near the hand guard made it a bit awkward and uncomfortable to use. It is very evident that the M249 MK-1 SAW was meant to rely on its bi-pod. In the tight corners of SC Viper’s urban area, it became a bit of a liability and I couldn’t recommend that beginners utilize this AEG unless they fully understand what a support gun like this is meant to do. It should be noted that when I was able to get the SAW mounted on its bi-pod overlooking SC Viper’s main roadway, it was a lot more effective at pinning OPFOR down (although the range suffered due to a hop-up problem – more to come on that).

Performance-wise, the M249 MK-1 SAW fired consistently at 380 fps with a fire rate of 750 rounds per minute (12.5 rounds per second). The AEG has a rotary knob on the gas tube underneath the barrel meant to adjust the AEG’s rate of fire (at least, it does this in other A&K support guns). In this first-gen A&K M249, however, the rotary knob is there but non-functional. Another problem with the gun was that its hop-up system did not function whatsoever. I even took out the inner barrel and manually adjusted the hop-up expecting to see the “nib” move down into place to provide spin. It never extended into the inner barrel and, in playing with the gun, its range suffered because of it. I have read on numerous Airsoft forums that A&K support guns are notorious for non-working hop-up units. Apparently, this issue can be fixed by taking apart the hop-up and adjusting where the nib is in relation to the hole on the inner barrel where it should protrude. Many Airsoft shops will actually fix this for you, free of charge. So, I highly recommend that you look at your M249’s hop-up before taking it to the field, just in case your gun needs this service performed.

Not counting the easily-fixed hop-up problem, I rate the A&K LMG MK-1 SAW a solid 3 out of 5 stars. Ultimately, A&K’s poor QC as well as its awkward design bring the score down. That being said, if you are gifted at modding your AEGs, this support gun would make a very nice platform to build upon – especially at its economic price point. The A&K LMG MK-I SAW AEG retails for $284.99 at AirSplat’s official website.

*NOTE: Please excuse the lack of video in this review. During our excursion at SC Viper, our camera malfunctioned and has yet to recover. We will review another AEG once our camera is fixed so we can bring some in-game video of it in use.