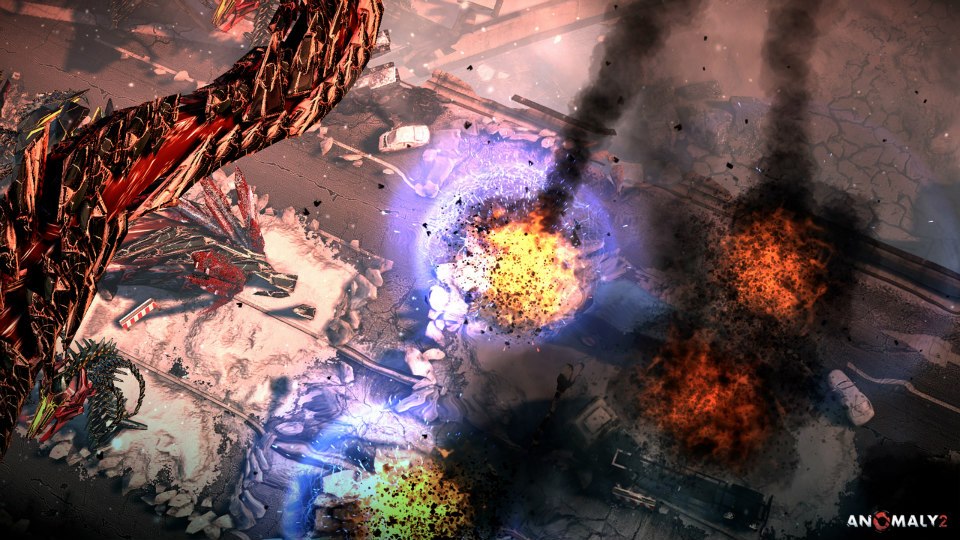 While the game is currently in beta and still needs to get lots of work done to polish the mechs and oil the scales, 11 bit Studios has given us a taste of what’s to come with their Anomaly 2.  I pride myself on playing real time strategy games – every one I can get my hands on and, for the most part, the differences between them tend not to be the game mechanics but, simply, the story that unfolds or, in some cases, the player create throughout the game.  The games basically follow a formula as straight forward as a tower defense to a micromanaged economy with variations in between.  Surprises are few and far between, so it is nice to preview a game that had me wondering what would happen next right up until the end.

In the years following the invasion of Earth in 2018, the planet is overrun by alien machines. Humankind is on the verge of extinction. Banded together in huge convoys, they search the frozen tundra for food and supplies. Since the war, the roles have been reversed: now our species seems to be the Anomaly on a machine-controlled planet. Your convoy, Commander, is called Yukon. 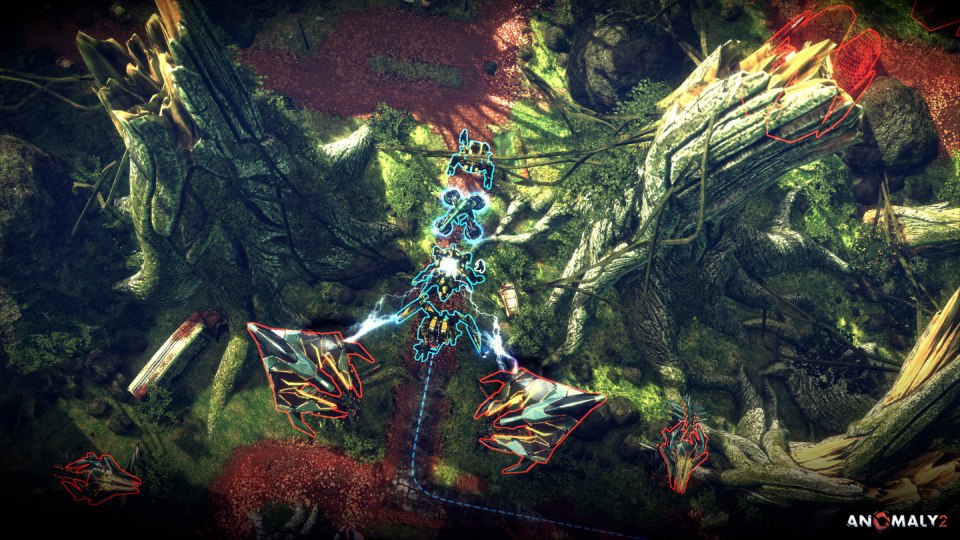 Anomaly 2 is a real-time strategy game that takes the tower offense concept from Anomaly Warzone Earth to a new level. Maintaining the core concepts of the original – tactical planning and the on-field Commander to support troops in combat – Anomaly 2 introduces a number of important new features: 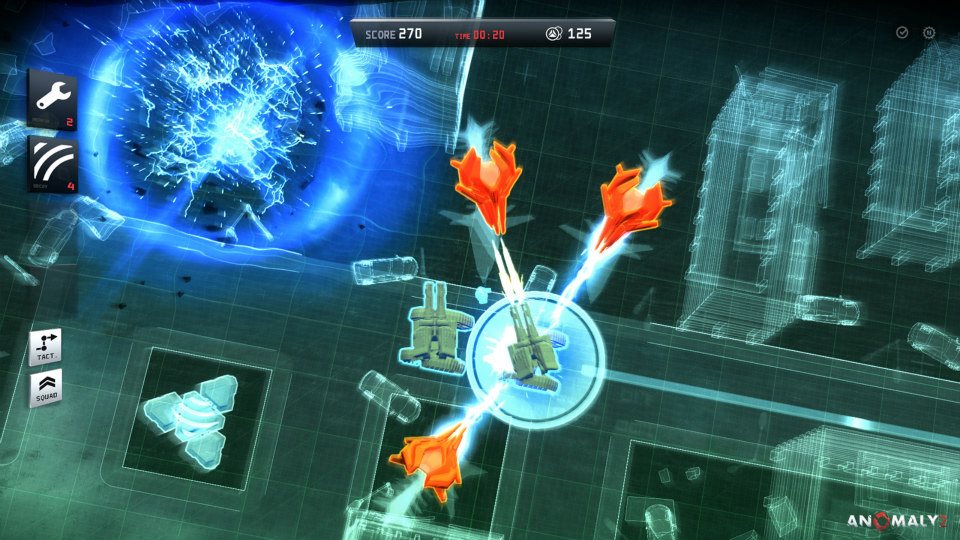 In the game’s official description, it mentions the on-field Commander that was introduced in the first game. If you didn’t play the first game, this will be a unique experience in and of itself.  Normally, when it comes to command roles in an RTS, it boils down to clicking units on the screen and directing them where to go.  In the tradition of tower defense games, the route through most of the levels is determined by carefully laid-out terrain and trails. Again in the tower defense tradition, these trailer are lined with proximity tower locations.  One nice thing is that any location that can have a variation on path, any intersection or fork in the road you can determine which route your convoy will take right up until the moment they hit it, to the point of even creating a closed loop if you want to allow range weapons to work on an enemy such as circling a block with your artillery while hitting one of the enemies a couple blocks up.  Strategy plays heavily into the routing aspect as well as the unit choice and unit form choice, everything from range to rate of fire affect the outcome.  This strategy allows players to replay a map several times by selecting different units, different forms, and different routes to maximize speed, damage, and achievements. 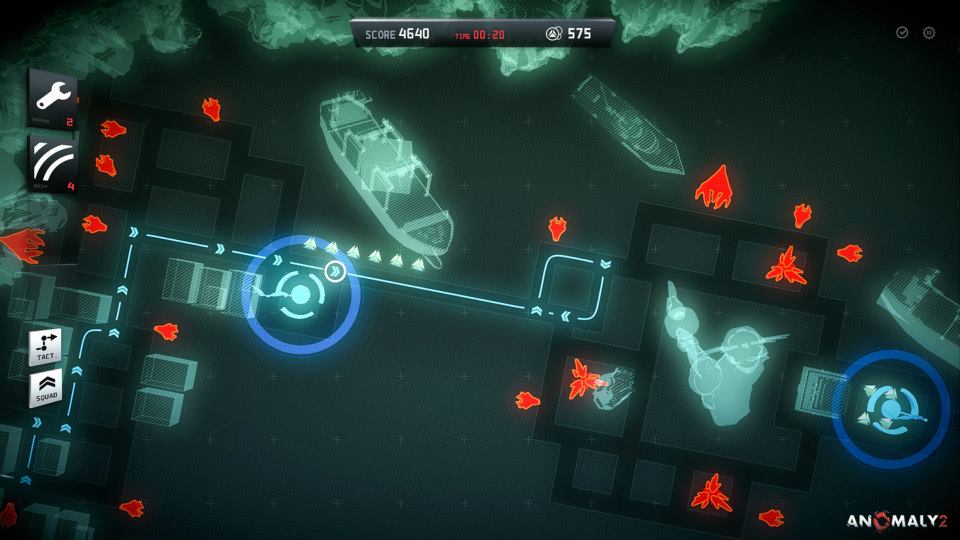 The real difference in this game is in the on-field Commander and how he changes up the possibilities with his ever-growing variety of skills.  For example, your units are cruising along through the rubble of New York City, fighting off mechanized insects as they pop up and attack on the side of the road. All the while, you have a unit known as the Commander running, yes running, through the debris and alleyways as fast as he can healing your units while messing with the enemy ones all controlled by you.  To a degree, most tower defense games you set up your units and send them into the grinder but, in this one, you are constantly manually controlling the Commander around the field.  Do you use your energy to throw a heal bubble on the road in front of your artillery that took damage in the last attack or do you sprint ahead and lay down decoys that will temporarily distract the enemies so they will delay hitting your forces?  Do you spend your energy setting off an EMP to temporarily shut down an enemy unit or do you change to wide map, adjust your convoy’s directions to buy yourself time to repair them and transform their forms?  Unlike most tower defense games where you have built what you have built and it is time to see how it faces the enemy, your Commander abilities keep you constantly making adjustments and changes.  If you want a breather you need to either pause the game or route your forces through some undefended area because otherwise you are dealing with an unusual hybrid: A micromanaging tower defense game.

I like this game already even with having only played the early build they provided.  I was constantly looking forward to the next commander upgrade and to find out what I could do with it, thinking outside standard strategy to get things done in a unique way.  My on-field Commander must have been on some serious energy drinks because I had him running all over the map and I was constantly popping from close map to wide routing map.  I have always loved a good tower defense and RTS management game but this hybrid definitely had me coming back for more.  Anomaly 2, this commander waits for your release impatiently.