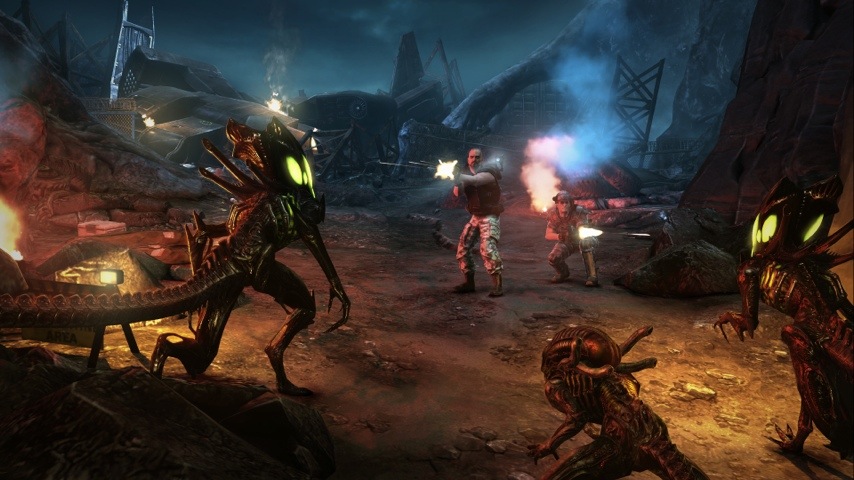 One cool aspect of the game that I enjoyed was the system of customizing your weapons, which range from a slightly upgraded version of the pulse rifle used by Colonial Marines in the movie “Aliens”, to an array of shotguns, battle rifles, and more. There are also “legendary weapons” to be found throughout the game such as “Hicks’s Shotgun”, which actor Michael Biehn made famous with the line, “I like to keep this handy [racking the shotgun], for close encounters”. Legendary weapons like this cannot be modified, but usually have a good advantage over the base weapon type they replace. I giggled when reading this message as I tried modifying “Hicks’s Shotgun”. 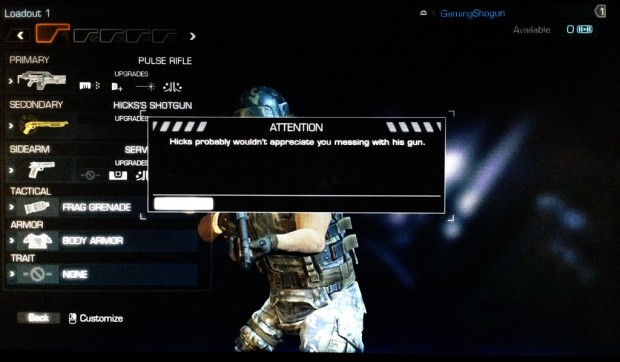 Unfortunately, Aliens: Colonial Marines suffers from some rough aspects that need addressing before I can fully recommend it for hardcore shooter fans. The first issue is the AI of the game’s various NPCs. Enemy soldiers will grab for cover, which is nice, but they often have seriously bad reaction times and are not very challenging. This is in contrast to Xenomorphs, which are very quick and hard to spot, especially when put against the backdrop of a wall resembling some kind of secreted resin… Their AI seems fine, mainly because the Xenomorphs are expected to act more animalistic. They run across walls and ceilings and can be a real pain in the ass when encountered up close. If you crack one open at close range with your pulse rifle, expect some splash damage from their acid-blood. The AI of your teammates is also wonky, with them sometimes falling behind for no reason, only to “rubber band” to your location. Other times, they will move forward without you, leaving players to catch up. With that said, the game’s story campaign is a whole lot of fun in co-operative mode. There, you and your friends can geek out together as a squad of “ultimate badasses” and take on the alien hordes. It still does not solve the issue of AI, but it does circumvent it a great deal.

The second biggest issue weighing against Aliens: Colonial Marines is that of its game engine. Visually, the game isn’t going to win any awards. Although, on my PC gaming rig, I was able to turn all the detail sliders up to full and the game looked “okay” and ran with warm-knife-through-butter smooth frame rates. It’s simply not as bad as the haters out there have been making it out to be. It is no Crysis 3 in the graphics department, but you have to keep in mind that the game engine powering Aliens: Colonial Marines is roughly 8 years old. More important is the issue of the character animations. While the player character moves around fluidly, most other characters don’t. It’s like they are stuck in 25 frames per second while you move in 30 frames per second. Going back to the visuals, the game’s explosion effects leave a lot to be desired. When you fire the under-barrel “30 mike mike” launcher on your pulse rifle, you expect some flames when the round explodes. In Aliens: Colonial Marines, the 30mm grenades are like little puffs of smoke going off, and their splash damage area seems a lot lower than it should be. In general, though, weapons are implemented a lot better than in the latest AvP title from Rebellion.

The game’s multiplayer mode selection is interesting, with “survival” and “escape” modes being the highlights for me. Multiplayer games consist of 5v5 teams and there were plenty of players on Steam available for matches during my play sessions. Overall, I had a fun time with this area of the game. An additional note about multiplayer is that those game modes tie into the level and experience system found in the game.

Read more on the next page….