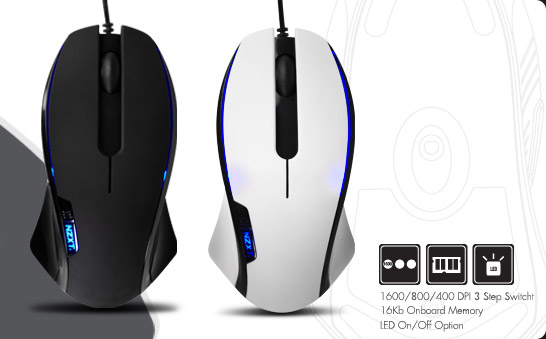 Today, we look at the Avatar S gaming mouse from NZXT, who is better known for their PC cases and cooling systems then for their mice.  The Avatar S replaced my trusty Razor Starcraft II Spectre mouse for this last week, as i tested it on games like DMC, World of Warcraft, The Secret World, and Team Fortress 2.  I was interested in seeing how the Avatar S would behave with this set of games, along with my usual internet and writing duties that I complete in a normal week.

Let’s start off with the look and the design of the Avatar S.  The Avatar S is a very sleek mouse, longer but narrower then the Razor Spectre that I normally use.  This, at first, made the mouse feel much to small for my hands.  As the week went on and testing continued, the Avatar S began to feel much more natural and right in my hands.  I think I prefer a mouse that is wider in design then the Avatar S, but that is my own personal taste.  The Avatar S has five buttons, located in a standard ambidextrous configuration, allowing people to have access to all five buttons regardless of whether you use your left or right hand.  With five buttons, the Avatar S is designed more for casual gaming and less for the hardcore gamer that needs more buttons for macros.  I have a tendency to lean towards mice that have less buttons, relying more on keyboard buttons for my macros, so the Avatar S button configuration worked just fine for me.

LED lights give the Avatar S a nice blue glow to it, matching the blue glow on my keyboard and making it just look cool.  My only complaint about the design of the mouse is with the USB cord itself, it isn’t braided. 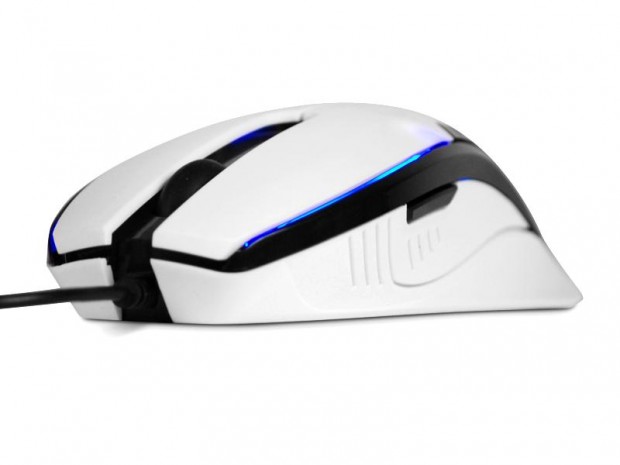 This may be more of a personal preference issue then an actual performance issue, but I have always preferred my cords with the extra protection that the braided cord gives, and how the braided cord has a tendency not to kink on me.  While I consider this a complaint and a negative against the Avatar S mouse, it isn’t a deal breaker for me and did not impact the performance of the mouse at all.

For me, either a mouse works well or it doesn’t.  The Avatar S has the ability to switch between DPI settings and allows the player to set up macros and settings, just like other mice on the market, but you can also switch between DPI settings on the fly.  Running the Avatar S at the 1600 DPI setting, I hit my weekly gaming session.  While I have the ability to get technical with some hardware in the PC world, with mice I prefer to keep my reviews in the realm of the layman.  For me, either the mouse works and is comfortable or it isn’t.  With the Avatar S, the feel of the mouse grew on me as the week progressed.  The Avatar S performed through my series of games quite well, allowing me to track accurately and quickly.  Switching from a first person shooter to a role playing game didn’t change how the mouse performed at all.  Hardcore gamers may miss some of the extra buttons on the mouse, however, I did not.  I pretty much only prefer to have five to six buttons on my mouse, even for World of Warcraft.  The only negative I can see the Avatar S has versus the Razor Spectre is the lack of alerts that the Spectre has for Starcraft II.  Seeing that the Spectre was designed for that game in particular, this is a negative I can safely ignore.

The Avatar S from NZXT performed quite well through my week of testing, through hours of role playing games and first person shooters.  The Avatar S felt small in my hands, at first, but the size began to grow on me as the week went on.  While I can switch between DPI settings on the fly, I prefer to operate my mouse at the 1600 setting and played all of my games with that setting.  The negatives I have seen with the Avatar S really falls into my own personal preferences; the lack of a braided cord, the overall size of the mouse, and the the weight.  The Avatar S is a light mouse, and for me, I prefer a mouse with a little more weight.  What the Avatar S did do right is perform well through my series of weekly gaming sessions, and general PC use.  The Avatar S mouse from NZXT retails for about $40, which is on the cheaper side for gaming mice.  If you are looking for a new gaming mouse, that is a straight forward functional mouse and one that will save you a few bucks, check out the Avatar S gaming mouse from NZXT.