I can appreciate a long term play iOS game, especially ones with daily check-ins since my back is bad enough that I have to rest it in bed on a daily basis.  If I am having a hard time getting up or going to sleep, I open up my phone and jump onto the handful of daily plays to pass the time.  Until recently, I only had one of each kind so I didn’t burn out: zombie survival, base strategy, real time mission strategy and a TCG game.  Then another TCG came up with a bit of questioning on whether or not we were going to cover it.  Since it was free so I added it to my rotation so I might as well let you know what I am up to.

The realm of the gods is in turmoil! Now is your chance to replace the diabolical Zeus! Interact with other players to build an invincible army of gods and mythical creatures to crush all who resist. Battle other players from around the world on your own, or join a guild to team up with others and dominate the rankings.  Greece stands shattered from the turmoil. It is up to you to restore order and peace to the Pantheon!

The storyline doesn’t take itself near as serious as this with instances involving a minotaur mini-mart and card descriptions and abilities named simply to be silly. 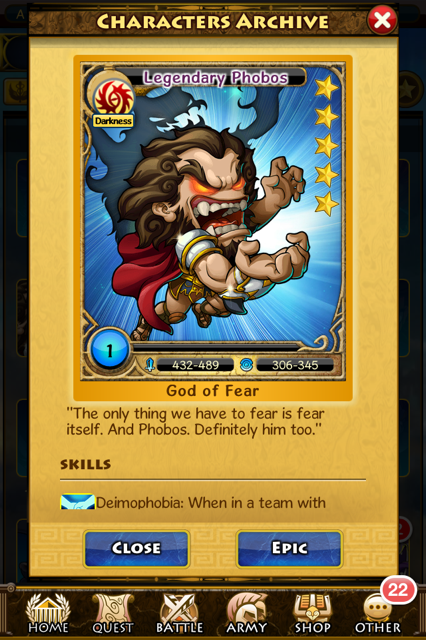 Graphics are cartoonish and fun, the music is classical with cartoonish sound effects when sound effects are called for.  The game is definitely designed to be fun and not to be taken too seriously, though there are people who always will.

Questing consists of a room description with a picture above it and a listing of how much stamina the turn will require.  The player clicks on “Go” if you have enough stamina and a wheel appears with a marker at the top and it is a wheel of fortune where you can win a experience, coins, treasure chest or Zzz.  The Zzz is basically a lose a turn, the coins and exp are pretty obvious then the treasure chest is a random card, usually a piece of a treasure or a common character card.  The pieces of treasure are collected until you have all of them needed for the particular treasure (pan pipes are three pieces, the caduceus staff requires five pieces).  While collecting and assembling the pieces, they can be stolen in PvP battle by another player (you can put a truce in place for a price to prevent theft during assembling), and this is the main purpose of PvP: To get the pieces of treasure so you can equip your army with the stat improving equipment or sacrifice them to enhance the stats on another piece of treasure.  You need to make sure you don’t get too tense about the PvP situation, very high levels can attack very low levels and take their pieces.  Bullying doesn’t just happen it is common practice so expect it and stay relaxed about it, it will be your turn eventually.

This is also how you improve your army. You collect maiden, griffins and satyr cards by spinning the quest wheel and then sacrifice them to make your main characters level.  I chose Phobos (as in phobia) as my main and I have been sacrificing one star cards in his name for days, probably enough to fill the Colosseum. Luckily the cards and beasties are virtual.  It has been a bloodbath but he has gotten stronger and made my army stronger as a result.  Once his level is maxed out I pick my second best teammate (or favorite, Leonidas For Sparta!) and start throwing sacrificial cards at its feet by spinning the wheel of fortune.  There are also the occasional boss battles which usually pay a common or slightly uncommon card and instances which aren’t based on your stamina but rather on real time, so the first rounds of the instance you might get to spin the wheel every 20 seconds then the rounds right before the instance boss the turns may take two hours a spin. 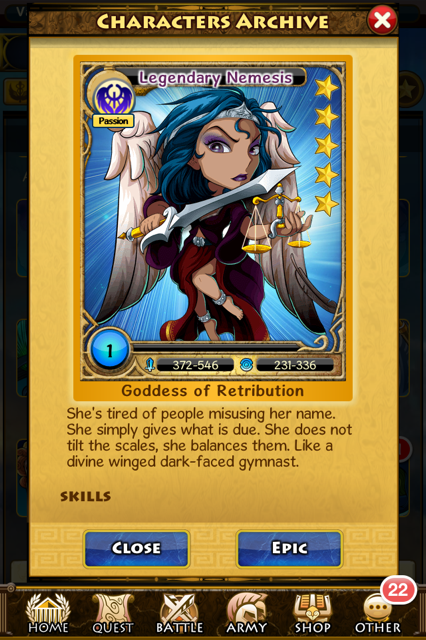 The rare cards are gotten by opening the silver and gold card packs and that is how you get the real heavy hitter characters of the game.  How heavy?  I don’t know, I don’t have the money to spend on free to play/pay to win,  but I can tell you what it is like to play free and whether or not it is still a good game without spending a dime.

The game is fun as a time killer, collecting the different cards, and the game tries to not take things too seriously.  There isn’t much action when you think about it, the game is basically Wheel of Fortune with card collecting and enhancing. If you want to spend money, you can win some buff cards and, if you don’t want to spend money, you can have fun with lesser known gods and deities. Just don’t expect Zeus to join your team anytime soon.