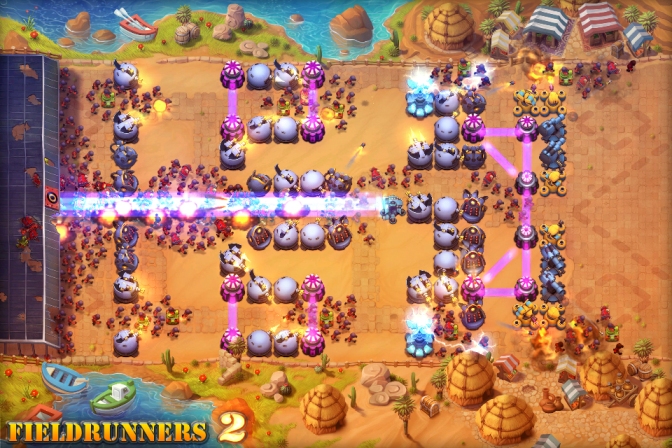 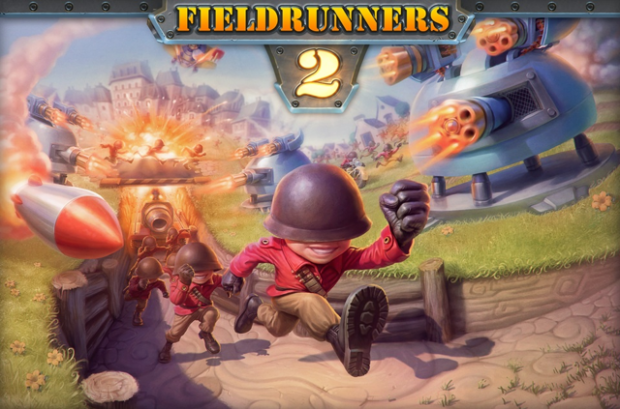 There are plenty of tower defense games out there with just about as many styles and themes as there are well, styles and themes in gaming.  They tend to attract a certain type of player that loves real time strategy and has a mind that loves building a better mousetrap.  At its core, every tower defense game is a mousetrap building machine, you try to build a defense that catches an enemy while trying to go between point A and B using the tools at your disposal.  Whether it is a freeway or a field, whether your enemy are orcs or tanks, you are building a maze the enemy is meant to never escape.  So when it comes down to it a good tower defense has to have solid mechanics, fun theme and the ability to catch that mouse if you have the mind for it.  Fieldrunners managed to do that and do it well, bringing along a sequel, but that doesn’t mean the sequel holds up to the original.

The fieldrunners are back!  With legions of soldiers and a gaggle of new tricks, they’re ready to conquer the globe. Or so they think!  Our top scientists at SubaLabs have built a bleeding-edge arsenal of devastating weapons for any heroes willing to stop these dastardly invaders.  Help your people by taking action – DEFEND THE WORLD!

Maybe it is not the strongest storyline in the world but really who cares?  When it comes to storylines, tower defense games don’t require them so in this case to have a fun, cutscene driven one is a great reason to watch the loading screens between levels. 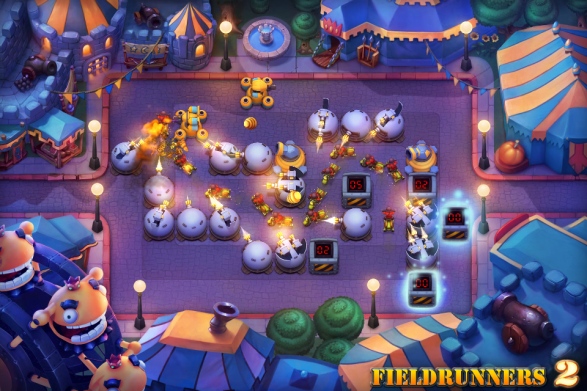 The graphics are colorful and cartoonish and definitely lend themselves to the playful atmosphere the game tries to promote.  The towers each have their own feel and character as do the enemy troops that storm wave after wave.  The sound effects are fun and a bit silly adding to the overall addictive atmosphere of the game. 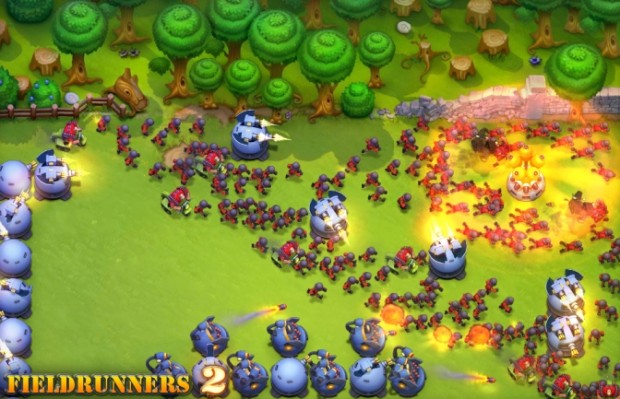 No matter how fun a game looks if the gameplay isn’t solid you aren’t going to stick with it.  The makers also have to run the balance between a challenging game and an impossible play.  Luckily the makers of Fieldrunners 2 had a very solid understanding of walking this line that they developed in the first game and carried over into this one.  Every map has it’s own terrain with challenges and strengths as does each enemy making picking the right tower and the right placement vital.  You can build a meat grinder line of gun turrets but if the runner is too fast and you don’t have glue guns to slow them down or turnbacks to keep them in range they will be across the field and damaging your headquarters in no time.  Your funding to build towers comes from taking down runners so you also have to manage your resources extremely carefully.  You’ll start the level with enough money to put down a couple towers but only a couple and placement at the beginning sets your patterns so you are constantly trying to improve and develop your maze and your tower.  You can get special limited use weapons that range from turning back time three rounds to spreading plagues among the foot runners but you have to purchase them with credits earned during the levels.

The game starts you in easy with a learning level but you soon find yourself in harder and harder maps with 70 waves of enemies testing your defensive skills.  With so many waves a single level can take you quite a while so you either want to put some decent time aside for it or play on a computer you can leave paused and come back to.  The enemies start with foot soldiers but soon work up to motorcycles, tanks, planes, even zeppelins that cruise right across you maze in a straight line and as a player you need to keep putting up more expensive towers and upgrading them as quick as you can.  There are three levels of difficulty though I think it could have done with a level between easy and tough because there is a big difference between them, especially on higher levels. 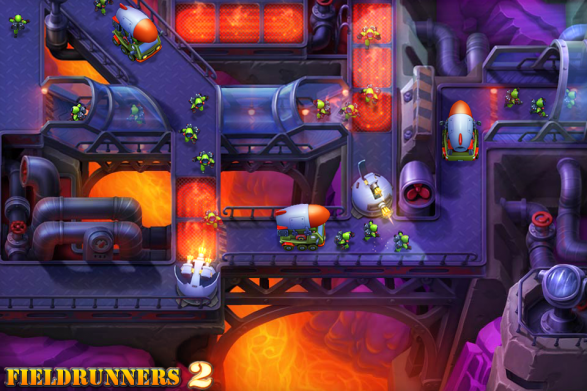 Fieldrunners 2 is exceptionally fun and addictive even for its genre.  I kept planning to take a break from the game for a while finding myself going just one more level, which means just 70 more waves.  Mixing and matching the towers to fit the enemies and terrain is a blast, sometimes literally and though it can be frustrating on wave 52 to have a new enemy arrive that blows past your defenses like they weren’t there you start over again with wave one planning on how to stop that sucker at 52.  This game isn’t for everyone, tower defense games in general tend to attract a certain mindset, but if you like this kind of strategy game you will love Fieldrunners 2 which is a shining example of what these games can be.
[easyreview title=”Fieldrunners 2 Review Score” cat1title=”Overall Score (out of 5)” cat1detail=”” cat1rating=”3″] Our Rating Scores Explained