So right before I headed to CES I was getting virus pop-ups on my rig left and right.  They were driving me crazy but on a tight time crunch I didn’t want to interrupt what I had to get done with a thorough cleaning so I just clicked on the annoying pop-ups as they appeared and figured I would deal with it when I got back.  While at ShowStoppers, a CES event where mostly smaller companies get a chance to showcase their innovations I came across AhnLab’s booth that had a simple solution to virus problems: a plug and play button that you hit when you see it flashing red meaning it has detected a virus and then wait for it to turn green meaning it has cleaned it.

Worried it might be infected and not have detected it yet?  double hit the button and it turns blue as it does a cleaning.  Deeper cleaning is possible by going into the menus and you can click and see what particular viruses are attacking and where or you can just ignore it and not worry about it until it changes to red flashing again.  The button goes into one USB port but provides two and whenever you plug a USB into one of the two it checks it for viruses.  The button which can be taken and plugged into multiple computers and checks them automatically also has storage space in case there are certain files that you want on all your computers, they can go with you along with virus protection. 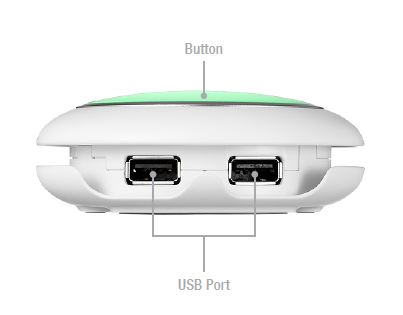 I knew what viruses were infecting my computer and the root virus that kept causing them.  Another virus detector had located the root virus for me but removal was an extremely lengthy task that I kept checking to see the best course for all the time getting hit by the viruses reinstating themselves.  Each time they came back the V3 Click was the first detection system to detect them and enable me to click on it and prevent a single popup.  Unfortunately not only could it not remove the root virus it didn’t detect it on standard scans.  So I went through the process of cleaning out the root virus but put it on an USB drive to test detection further later.  After cleaning the system I plugged in the USB and the virus was immediately detected and destroyed by the V3 Click.  It wasn’t until after this test that I discovered that there were two types of sweeps by the V3 Click, the button hit is just a quick sweep while there is a “deep clean” option in it’s bar functions that may have detected it.  This has to be left a question because I have no desire to put such a deep virus into my computer’s core again but it is possible it would detect it.

It is difficult to test a virus detector in general because you have to be willing to subject your system to one.  I do know that AhnLab V3 Click did an excellent job catching the launched viruses as soon as they were planted, it worked faster than several others on the market and knocked them down with an easy hit of a big shiny button.  It’s standard scan doesn’t detect deep rooters but it might have gotten caught by it’s Deep Clean had I not already gotten rid of it, though this particular virus manage to avoid detection by a few other virus detectors so even if it did miss it it would be in good company.  The fact that it is plug and play on any computer, automatically checks USBs on it’s own safe system and stops the insanely annoying popups all make it worth it’s money.  I hope that AhnLab continues to build it’s software detection strength because this button is a surprisingly handy virus protection system.

The trailer below does a great job describing it’s functions, it gets a bit dry in the middle but the end precautions are hilarious and worth the wait!