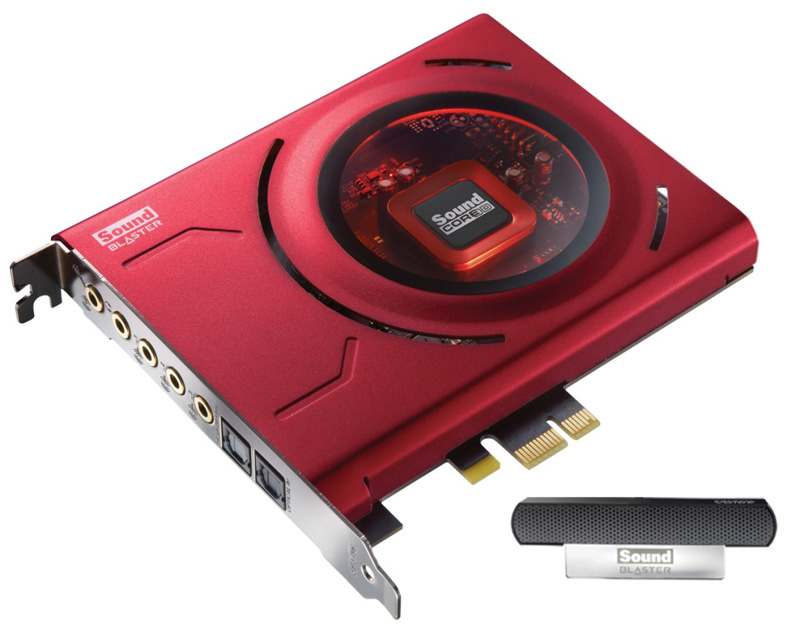 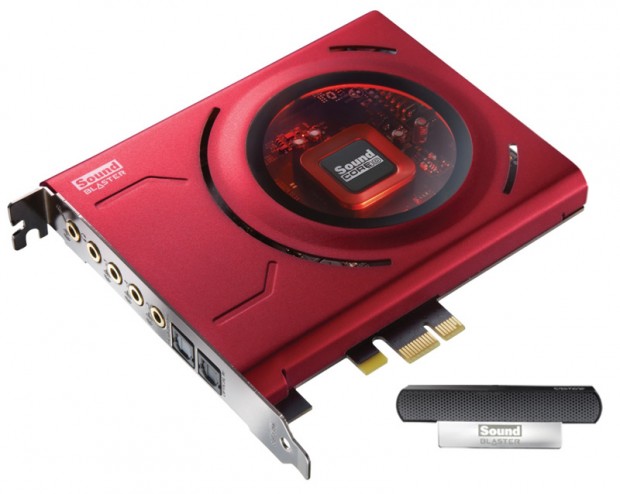 Creative Labs recently sent us over one of their new Sound Blaster Z sound cards. The Sound Blaster Z is the entry-level in their latest sound card line and we were very excited to review it, given the sometimes controversial outlook on discrete sound cards by gamers. If you have not heard about this, many gamers overlook discrete sound cards in favor of on-board motherboard audio chips. We hoped to not only review the unit but, also, compare it to our ASUS Sabertooth Z77 motherboard’s internal audio to settle the score on this argument for good.

Design-wise, the Sound Blaster Z is very much a Creative Labs/Sound Blaster sound card. Featuring a PCI-E interface, its exterior features a red aluminum heat sink/cover and cool red LED lighting, it is a very snazzy-looking sound card. Installing the Sound Blaster Z is a straightforward process of inserting the card into an available PCI-E slot, attaching the hookup to your case’s front panel connector, and installing the software. The whole process took about ten minutes.

After installation and software setup, you can configure the Sound Blaster Z in the software utility. Looking very similar to the control panel from their Recon3D sound card line, the control panel has a lot of settings for you to play with. Also, the new SBX Pro Studio feature set is basically an updated version of the THX TruStudio Pro features found on the Recon3D sound cards. In terms of quality, these features are noticeably better than their previous version. The SBX Surround technology, which simulates a surround sound setup using a 2.1 sound system is a prime example of this. These simulations are getting scary-good at emulating true surround sound. Additionally, the Sound Blaster Z’s front channel 116dB SnR (signal-to-noise ratio) was audibly better than our on-board sound chip’s 95dB SnR – especially when pumping up the volume of our Corsair SP2500 speaker system (that thing “goes to 11” as they say).

I have been enjoying the Sound Blaster Z sound card with titles like Call of Duty: Black Ops II single and multiplayer (turn on the Scout Mode), The War Z (DEFINITELY turn on the Scout Mode), and even my personal favorite right now: DCS: A-10C Warthog. These are just a few examples but I have nothing bad to say about the card’s performance in any of those or any other game I use it on. Beyond gaming, the card also performs beautifully in playing higher bit rate Mp3s. Music is crisp and plays back wonderfully – especially nice right now when playing those holiday favorites. The included beam microphone is excellent and eliminating background noise and my lance mates in the Mechwarrior Online beta had no trouble hearing my comms.

Overall, the Sound Blaster Z sound card is a good purchase for $99 dollars. So long as you have a decent pair of headphones and/or speaker system, you will hear a difference over most on-board audio chips. Additionally, the SBX Pro Studio features are very good at enhancing video game audio and the “Scout Mode” is almost a cheat in some games. That being said, if you are using a $20 dollar computer speaker system from a 99 cent store, you won’t notice any upgrade over on-board sound.