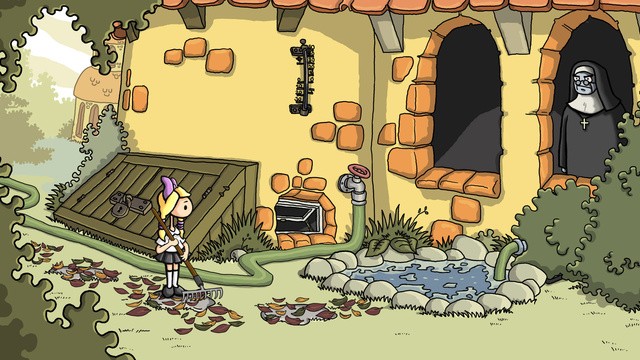 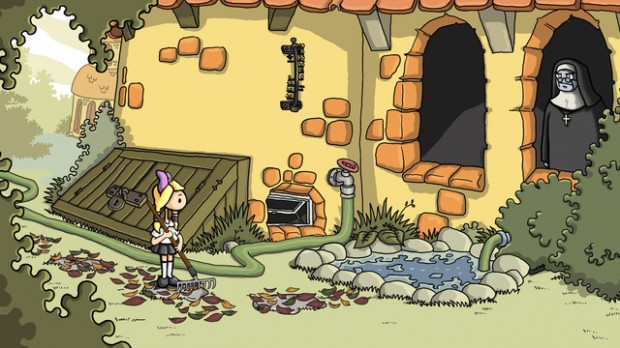 Daedelic Entertainment has brought us the unofficial sequel to their point-and-click adventure game, Edna and Harvey, this time around named Harvey’s New Eyes.  Those of you that played the first Edna and Harvey need to know that, despite the title of this game, you don’t play as Edna or Harvey.  Instead, you play as Lilli, a quiet child that is living in convent run by a tyrannical Mother Superior.  While the game is a vast improvement over Daedelic Entertainment’s first foray, it still has it’s issues.  However, Harvey’s New Eyes has enough shinning moments that fans of the point-and-click adventure genre that is in need of a fix will find it fun.

Edna and Harvey: Harvey’s New Eyes is the second game out from Daedelic Entertainment of this franchise of point-and-click adventure games.  Harvey’s New Eyes stars Lilli, a very quiet and seemingly non-threatening girl that is living in a convent, which is run by Mother Superior, a tyrant who has it out for Lilli and the other children under her care, including Edna from the previous game.  The plot begins with Mother Superior tasking Lilli to do some simple chores around the convent, like rake some leaves or dig up the flower bed.  However, Lilli is an accidental mass murderer, meaning that her actions always seems to end in the grisly death of another person near her.  What makes this funny, is that Lilli just either doesn’t notice, or doesn’t care.  She just goes on with her life as if it hadn’t happened.  The appearance of small creatures that paint over these deaths may give us a clue as to what Lilli sees, but are never explained or explored further by the game.

The plot of Harvey’s New Eyes gets kicked into gear when Mother Superior announces that the mysterious Dr. Marcel is coming to take care of the children once and for all.  Edna has heard very bad things about Dr. Marcel, and has asked Lilli to help her escape, tying this game with the first Edna and Harvey game.  Lilli spends the rest of the game solving puzzles to help Edna, while inadvertently killing off the other characters of the game.

The story of Harvey’s New Eyes works well enough.  The humor made me smile more then once through the game play, but no one joke or plot twist made me outright laugh. Lilli’s killing spree is done fairly well also, but the characters she ends up causing the deaths of are never made to be that interesting, so the deaths don’t really come through as either tragic, or funny.  The actual plot of the game makes sense, but just feels incomplete or like it’s missing a key component.  The story just feels passable to me, it is a better told story then the first Edna and Harvey, but pales in comparison to the top notch games of this genre.  What Harvey’s New Eyes shows me is the promise and ability that Daedelic Entertainment has with this franchise, if they can nail down a few intangibles with the story lines.

Edna and Harvey:  Harvey’s New Eyes is a point-and-click adventure game in the oldest sense of the words.  You simple point your cursor over where you want to want or what item you want to interact with, and click it.  If the character can use it at that time, then they will.  Otherwise, you will need to solve a puzzle or collect other items before the game will continue.  The only other two mechanics that Harvey’s New Eyes has is an inventory screen, which is simple enough to navigate and holds all of the items that Lilli has found for future use, and a user interface that allows the player to click a button to see everything that he or she can interact with on that screen.  This will make it easier to see what you can interact with, instead of just roaming your cursor around the scene, but I found that I didn’t have to use it much because the objects were fairly obvious to see.

Every point-and-click adventure game lives or dies by two important details; the story and the puzzles.  We have already discussed the story, so let’s talk about the puzzles in Harvey’s New Eyes.  Puzzles in these types of games are hard to create.  The developer has to make them challenging enough to extend the game play, but make them logical enough that the player will eventually figure it out if they just think about it.  Many developers make the mistake by making these puzzles illogical to figure out, but Harvey’s New Eyes never had that feeling to me.  Each puzzle that I solved felt like it made sense, from filling a well to retrieve a boy holding a key, to using honey to lure away termites, the solutions felt feasible.

The aesthetics of Edna and Harvey: Harvey’s New Eyes worked for me.  I felt that the art design of the game was interesting to look at and gave the game a unique feel.  The characters had a great design, reminding me of old Edward Gorey characters, especially Lilli.  The backgrounds have a nice cartoon look to them also, and fit right in with the character design.  While technically not as impressive as other modern games, I feel that the design and the look of Harvey’s New Eyes works for me.

The music, however, did not work as well.  There was some great pieces of music that, when first heard, sounded fantastic.  The issue is that you will hear that same piece of music over and over and over again, to the point that you will no longer want to hear it.  It feels like Daedelic Entertainment went the cheap route with the music, paid for one good loop, then used it ad nauseum.

Lastly, we have the voice overs for Harvey’s New Eyes, which landed firmly in the “decent, not great” category of voice acting.  The character’s voices brings more dimension to the game, especially Lilli whose meek voice just adds to the seemingly weak nature of the character.  The acting is neither over-the-top nor is it unfitting for the game itself, but it also isn’t memorable or fantastic.  The best thing I can say about it, is that it gets the job done solidly, which worked for me.

Edna and Harvey:  Harvey’s New Eyes is a point-and-click adventure game that lands firmly into the realm of “good, not great”.  The story was good, with interesting characters and decent voice acting to bring it to life.  I did like the visual aesthetics of the world that was created for this game by Daedelic Entertainment, but was distracted by the constant looping of the same piece of music throughout the game.  The game play mechanics work well and follow a logical line of thought for the most part, and never reach the difficulty that some of it’s contemporaries reach.  When it comes right down to it, Edna and Harvey:  Harvey’s New Eyes is a solid point-and-click adventure game that shows the potential that Daedelic Entertainment has for eventually creating a true masterpiece.  If you are a fan of this genre, I would say pick it up and give it a try, it’s not like there are a ton of other point-and-click adventure games vying for your attention currently.