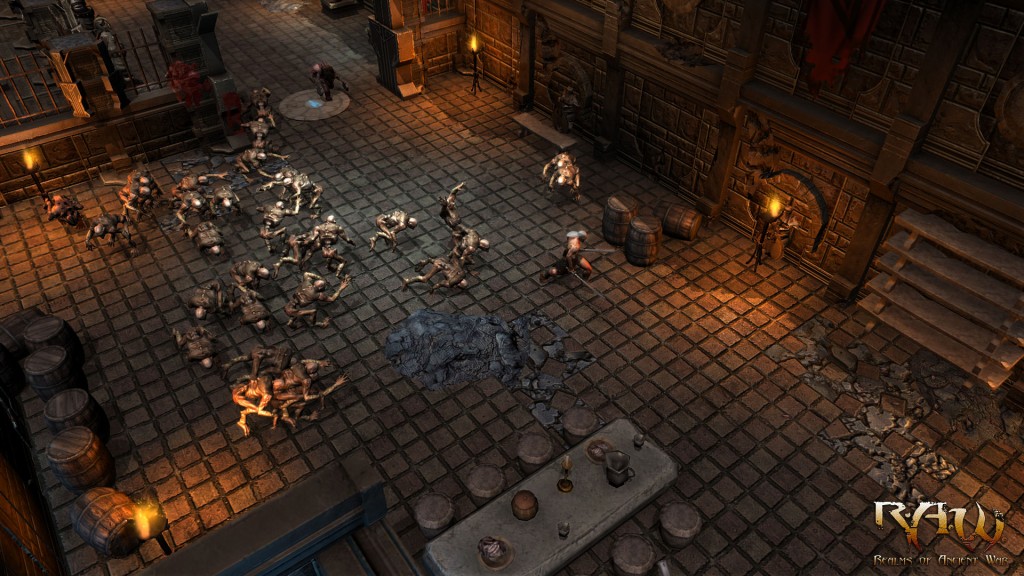 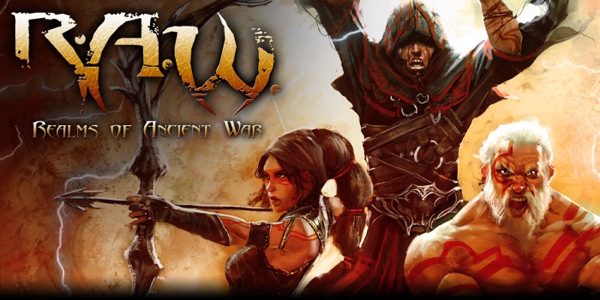 They go by a few different names, dungeon crawlers, hack and slash adventures and RPG action to name some but if you have ever seen Diablo you know what a prime example of the genre is.  By far the most successful of the dungeon crawlers, Diablo is what all other games of the type wish to be: great play with a dedicated fan base.  That second aspect is really hard to earn and many very good games have given us the great play and gone by practically unnoticed.  One of the ones that has been lucky enough to grab attention is Realms Of Ancient War, the only question is does it have the gameplay to keep eyes and hands on it? 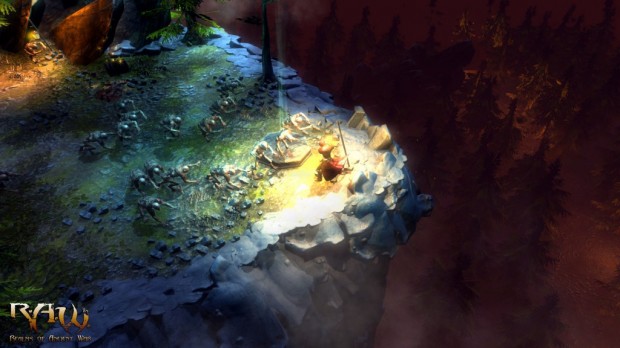 Long ago, the four kingdoms of men, dwarves and elves were torn apart in a violent war.  A brittle peace has been established 10 years ago during the mysterious “Summoning of the Kings”.  But today, the world is on the verge of entering war again, as hordes of Nothingness are pouring through portals across all four Kingdoms. The Kings have sent detachments of soldiers to investigate the origin of this new threat… none ever returned.  This all seemed so far away from you. But it is you that the King of the North has chosen, to open the four Portals and put an end to the evil forces, once and for all!

This seems like a pretty interesting plot and driving force for a game and reveals itself more deeply as the game progresses, fleshing out a pretty detailed story and villain.  You really don’t need a good story necessarily for a hack n’ slash adventure but it can be the defining edge that turns a single game into a series with fans crying out for more. 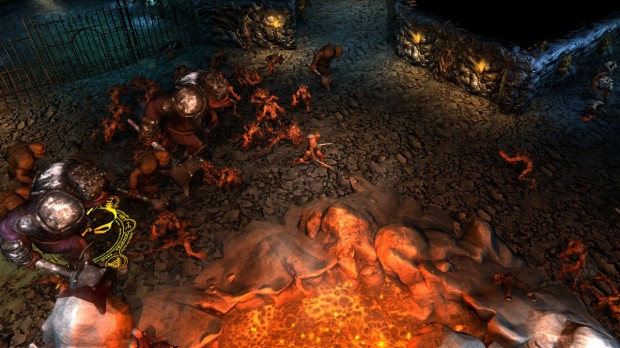 The graphics are really, really nice.  There is great detail all through the game and varying environments so that you don’t get tired of looking at the same graphics over and over, one dungeon blending into the next.  A lot of attention was paid to the graphics, from crumbling walls to growing blood puddles and it really shows.  Also a very nice touch is the corpses remaining on the ground instead of disappearing as soon as you leave the screen or right before your eyes.  This takes a bit more memory and detail to programming but is worth it when you are running around, can’t remember if you covered an area properly and you see a nice pile of carnage you have left behind.  It can be so cool seeing your areas of destruction that sometimes you just want to call somebody over to show them all the damage you have done.  The death throes of the beasties and their positions or in some cases lack of position make for very cool moments.  The only graphic question I have offhand is whether the developers intentionally made it so that the wizard’s green gas cloud looked like he ate too many chimichangas, if so I can relate to the wizard even more. 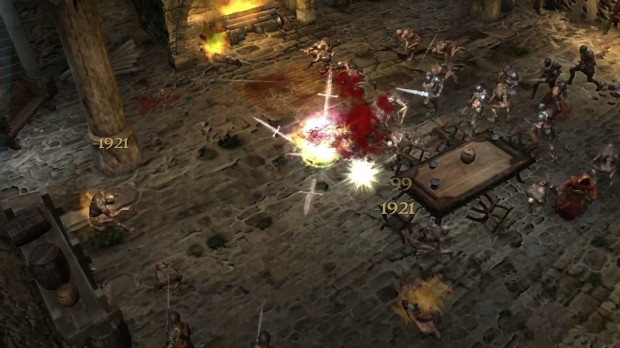 This is really the “meat and potatoes” of the game over which most things will be forgiven.  If the plot is a bit weak and the graphics suck good gameplay can at least get the game played and develop a fanbase.  As true to most hack n’ slash games you aren’t generally concerned with one of two enemies but hordes and hordes that pile up and collect around you.  These can make for the above mentioned corpse retention particularly satisfying as you watch them stack like wood, well bloody, death rattling wood.

There are three classes to choose from, a range strong Wizard, a melee strong Warrior or a mix bag Rogue.  These are pretty standard fair for this type of game, though the classes seem a little more reliant on their specialty than usual.  The game is designed to be single player or co-op and I think it comes through in the character developments with the Rogue being the solo player’s class of choice and the other two being the co-op.  Each class is completely playable on it’s own but even the specialty of the Rogue to turn invisible to enemies to regenerate strikes me as something that would be more like done single player.  That said each class has a nice group of talents to choose from with plenty of choices available from the beginning and skill build up in each of the talents.  If you are worried about enemies getting too close as a wizard you can put points into a knock back maneuver and bind that to your mouse keys or number keys, which are completely assignable by the player.  As you get higher levels the differences talent and skill wise will diminish between characters of the same class but individual items which can be different colors will still make them standout.  The system has a built-in comparison system too, letting you know when stats are better or worse between what you are wearing and what is selected in your inventory. 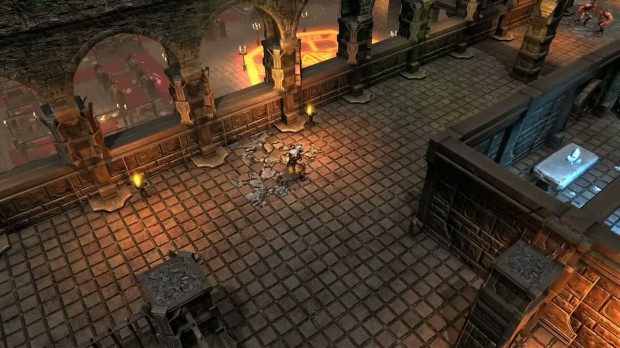 The death system favors co-op as with soulstones being needed to resurrect at soulstone checkpoints for solo players and resurrection if your partner lasts a certain amount of time after your death in co-op only using a soulstone if you both die.  This keeps you cheering your buddy along after you fall and is encouragement for the “doesn’t play well with others” co-op players to watch their teammate’s back.  These games are traditionally designed to be played multiplayer anyways so it is nice to see incentive to do so.

One thing to kind of get used to with this game if you play dungeon crawlers regularly is line of sight does not mean line on target.  When fighting enemies running around a corner to clear line of sight and picking off enemies is still a very important aspect but some environments such as coffins block like buildings instead of being able to be shot over.  This actually can add quite a bit to strategy once you get used to it.  The other thing is weapon damage is limited to distance not room size so if you are using a range attack it could end short of an enemy in your line of sight if you are still too far away from it.  This also can play into some good strategy during battle if you think things through and figure out the enemy’s range of attack. 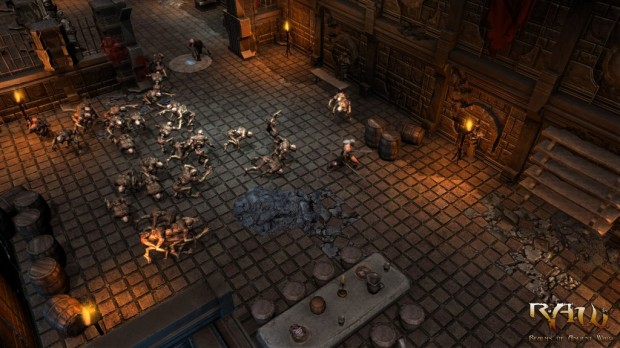 These games will always be compared to Diablo, they will never get out of it’s monolithic shadow, but that doesn’t mean a game that plays differently or the same as Diablo is a bad thing.  Realms Of Ancient War has developed it’s own style in a lot of key ways and is graphically beautiful to look at.  It plays a lot like a standard dungeon crawler which means it is easy for people who like them to jump into it but it has it’s own unique storyline to take players through a different tale.  I recommend it to other hack n’ slash, dungeon crawling, RPG action gamers like me. Time will fly as you’re killing evil.