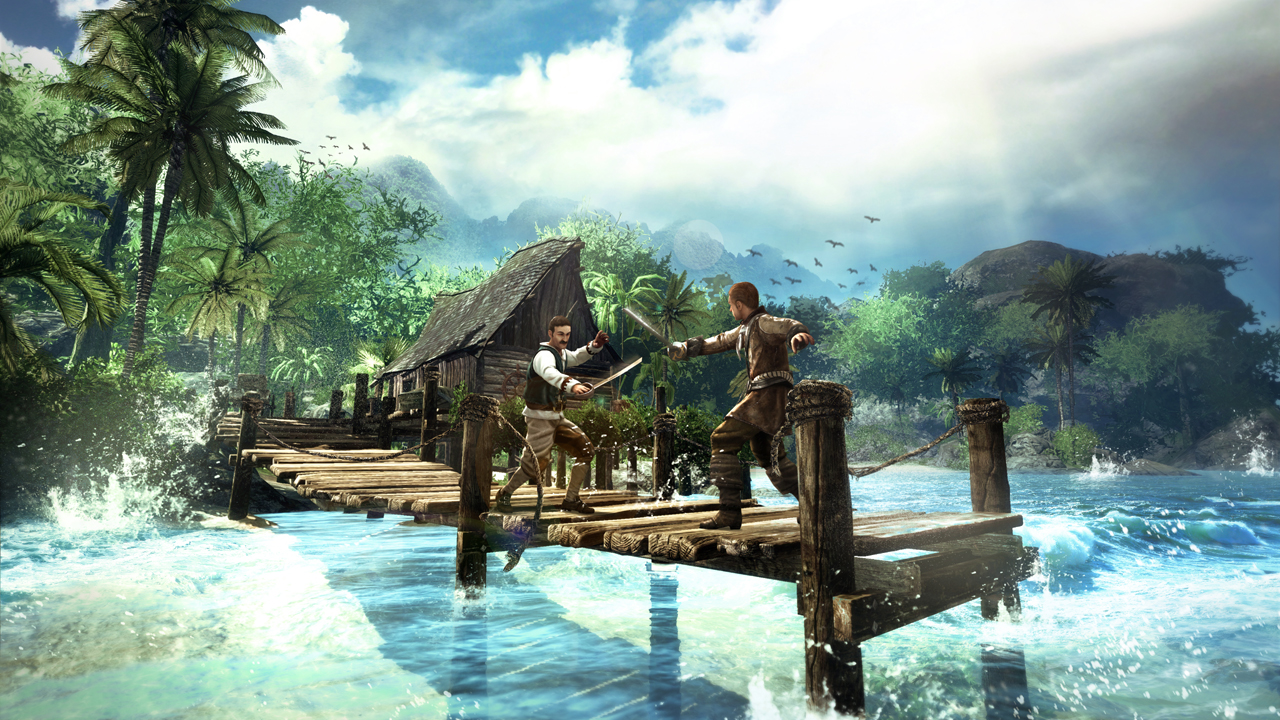 Piranha Bytes and Deep Silver has brought us the latest game in the Risen franchise with Risen 2: Dark Waters.  Instead of being a direct sequel to Risen, Risen 2 feels more like a re-imagining of the entire franchise, giving up on the high fantasy world of Risen for a more realistic pirate feel in the new game.  The story of Risen 2 follows the same nameless hero from Risen, as he sets out on a fairly generic quest, to collect legendary artifacts to defeat an ancient evil in the form of a sea monster.  Game play mechanics feel right and the world definitely gives you more then enough to do, but on the Xbox 360, the graphics just look horrible.  I’m not sure what happened along the way here, but everything looks washed out, the animations are not finished, and characters will even stop mid sentence and just stare at the screen.  What could have been a solid game, is brought down to mediocre even bad levels by unfinished animations and graphics. The story for Risen 2 is a very generic piece of work.  Risen 2 still follows the same nameless hero from Risen, who begins Risen 2 working for the Inquisition and being stationed on an island in the middle of the ocean.  He is awakened to see a ship coming into harbor, that is completely destroyed by the Kraken, a huge sea monster that has been hunting down and destroying ships throughout the ocean.  One of the survivors of the shipwreck tells a tale of her father and his legendary weapon that can be used to finally rid the world of not only the Kraken, but the other monsters that threaten humanity as well.  The nameless hero is then charged by the Inquisition with the task of recovering this weapon from the pirates and to proceed in making the world safe again. While very generic, the story line works well for the world that has been created for Risen 2.  There is a reason that most RPGs use this type of story, and that is because it is an easy way to give the heroes the motivation to leave their homes and partake in the mission that is given to them.  This gives Piranha Bytes the opportunity to fill the world with interesting creatures and side missions galore, which helps to flesh out the story line a bit more but never truly brings it into a great story.  I have to give Piranha Bytes credit for changing up the theme from high fantasy that was the original Risen, but going to a pirate theme in Risen 2 just feels like they are trying to cash in on the Pirates of the Caribbean success.  Unfortunately, Piranha Bytes and Risen 2 are even way to late to cash in on that success.  In the end, the story works, as does the environments, but ultimately just feels a little generic, like we have played this game before. Game play mechanics for Risen 2 are solid but generic as well.  Your characters skills, in the beginning of the game, start out very rudimentary and boring, only being able to swing a sword.  However, as the game goes on and you start to develop new skills, game play changed drastically.  Sword play becomes more involved and not just mashing the X button, and you gain abilities like sneak or pick pocket.  If learning to fight with a sword does not fit your character or play style, then you can focus on muskets or even learn voodoo spells.  For me, the voodoo system felt very underwhelming and underdeveloped, as I was  hoping for more here.

Voodoo had the potential to be really fun in Risen 2.  I could imagine being a voodoo spell caster and creating zombies or directly hexing my opponents using voodoo dolls, but Risen 2 only lets you debuff enemies or mind control them, with no direct damage spells.  Voodoo is used as a set of spells that you would cast prior to killing your enemies with either musket or sabre.  Not saying that you will not find uses for these spells, but as an overall system, voodoo just feels like a complete letdown and far more underdeveloped then most other RPG magic systems on the market. Some skills will give you different conversation choices as you go through the game, allowing you to intimidate or charm your way through the world.  Some of these choices will give you funny conversations or change encounters to your favor, but feels just like any other chat system that has used this style before, like Vampire: The Masquerade.  NPCs can be picked up too as you adventure through Risen 2.  Like the NPCs in other RPGs, say like Skyrim, they work best as damage sponges and targets for the beasts and monsters of the world.  Get the enemy to focus on your NPC so that you can move into position and blast away without taking damage, especially if the enemy is fairly cheap in its tactics by using stun locks.

Overall, what is here in Risen 2: Dark Waters is good but ultimately could have been so much better with a little more developmental time and energy.  A complete spell casting system would have given us another viable choice to run through the world of Risen 2, and I feel that Piranha Bytes really missed the boat with that.  I would have loved being able to summon a horde of zombies to do my bidding as I sat back and poked needles into a voodoo doll to damage my targets. Ok, here is where Risen 2: Dark Waters unfortunately goes belly up for me, the aesthetics department.  Let me reiterate a few points before I get into my little tirade.  The use of aesthetics in a game is a funny thing, all games have aesthetics and a design framework to work in.  Aesthetics and graphics are not the same thing.  Some games out there have great aesthetics with non high resolution graphics, like Team Fortress 2 or Awesomenauts.  The graphics of those games are not bad, just not on par with the top of the line games on the market, hence why I changed the title to this category to aesthetics, to allow games like Awesomenauts to shine. With the case of Risen 2: Dark Waters, the design of the game is well done.  I can see what the designers wanted to achieve and the world they wanted to portray.  Unfortunately, on the Xbox 360, the graphics ruin any chance for the aesthetics to come through and shine.  This game looks outright horrible on the 360.  It would be a bad looking game on the Wii, that’s just how bad it is.  Animations are not finished in the game.  Characters would stop moving their mouths to match the voice over, like all of that work was making them tired.  Characters would also turn without animations.  I felt like I was watching a horror movie sometimes, the character would be facing someone, then suddenly would appear to be facing someone else.  And who thought it would be a good idea for characters to stop and face the screen to continue their conversations?  This felt like I was watching a bad elementary school production.

The voice overs were not all that great either, with everyone sporting a bad accent and giving over the top performances.  The music was workable, but unremarkable.  Unfortunately, the horror show that was the graphics really took me out of any immersion that I would feel for this game, and made it hard to focus on anything else when it came to the aesthetics of Risen 2: Dark Water.  If you are going to buy this game, and have a PC that can run it, I strongly suggest you get it on that platform.  The Xbox version just isn’t good at all in this category. What could have been a good game comes off as rather mediocre, even bad, due to some game killing issues.  The horrid “last generation” graphics and missing animations coinciding with a lack luster voodoo system completely ruins a good but generic story line and solid game play mechanics.  If you get the PC version of Risen 2, then you will get an graphics upgrade, but will still be suffering through the underdeveloped combat system.  Even if you were a huge fan of Risen, Risen 2 does not give you enough to want to continue that story line, since this game feels nothing like the last game.  If you need to get a pirate RPG right now, then this is your only choice, but seriously, get it for the PC.  It’s still not great on the PC, but it looks a far sight better then it does on the Xbox, and in this case, that makes all the difference in the world.  Risen 2: Dark Waters is available now.