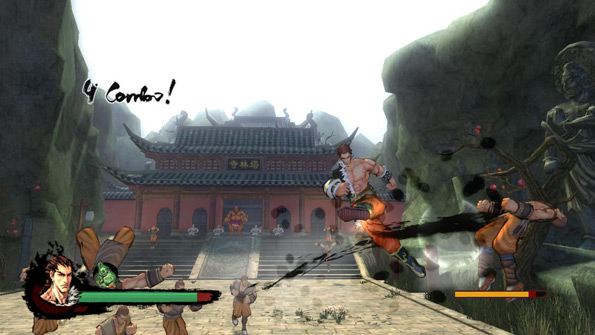 Qooc Soft and 7sixty brings us an old school arcade beat-em-up style video game with Kung Fu Strike:  The Warrior’s Rise on the XBLA.  While Kung Fu Strike will not win any awards for game play or story telling this year, the game ultimately succeeds where many have failed before, it is fun to play.  The story is basic and told through dialogue loading screens before each map, and can even be skippable in the options menu, so that should tell you how much the developers believed in their story.  Game play is old school brawler, fighting a screen full of enemies on your way to the boss for that section.  Aesthetics remind me a lot of Street Fighter 4, with the ink outlining and dripping as you pull of major moves, to reproduce the look of Chinese art.  That is Kung Fu Strike: The Warrior’s Rise summed up, now let’s look at the details of what made this game.

Whenever a developer makes the story to a game optional, I have some concerns.  The story is usually what draws the player into the surroundings of the game and immerses us into the world that the developer wants us to be in.  A story gives you that connection and when you make it skippable, like Kung Fu Strike: The Warrior’s Rise does, then you are just solely relying on your game play to save the game.  That means your game play has to be so good that people will want to continue playing your game without ever becoming invested in the characters.  That is a bold move, and it works here for Kung Fu Strike: A Warrior’s Rise, sort of.

The story follows you as General Loh, a general of the current ruling faction of China, who is both searching for his father’s murderer and is trying to save his ruler from a rebellion.  The game follows Loh as he searches for answers in a secluded monastery, searching for the master.  Unwanted at the monastery, Loh must fight his way passed everyone, just to have a talk with the master.  To make matters worse, members of the rebellion have traced Loh to this monastery and are trying to kill him to help further the cause of the revolution.

The story is told through graphic novel pages, a la Max Payne, but without any type of voice acting.  If we had cared more about the story and the characters, I truly believe this could have raised Kung Fu Strike: A Warrior’s Rise to a higher level of excitement and enjoyment.  However, since the developers had absolutely no faith in their story and chose not to develop it further, it only serves as background knowledge and the entire game has to rely on it’s game play to make it through this review. 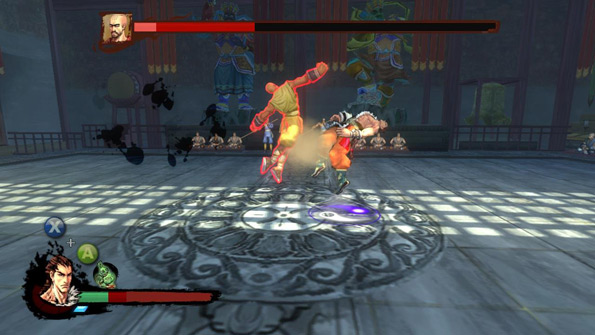 The good news here for Kung Fu Strike: The Warrior’s Rise is that it’s game play is enough to make this game good, though not great.  The game is set up to have you fight your opponents within sections of the monastery, like the front gate, the courtyard, or the “Zen Room of Emptiness”.  Within these sections, you will defeat soldiers and monks in groups, battling your way to the mini boss of that section.  While fighting these waves are fairly straight forward for this type of game, the action can be frantic if you are not paying attention enough to get yourself overrun, and the boss fights are a pain to play.  Each boss has a set pattern to their attacks, so it is up to you to quickly learn the tells from the boss in order to counter act or dodge these attacks.  I felt like I was playing Mike Tyson’s Punch Out again, staring into his eyes to see what move he was going to make next.  The bosses can also complete moves that are completely unblockable, and must be dodged.  These are truly what drove me up the wall, for I would have the block and counter punch pattern down, only to forget that the next move needed to be dodged.

The moves list plays out like any other brawler, you have some combinations that are all performed by hitting certain buttons in certain order that goes along with a block button that most will forget about until you fight the boss.  In Kung Fu Strike: the Warrior’s Rise, timing is everything.  Your blocks, parries, deflections, and moves will all depend on how quick your reflexes are on whether or not you are successful in pulling of the move.  Your biggest enemy here, however, is the camera.  The camera has a tendency to do it’s own thing during some fights, not all.  It will behave for most of the game, then decided that it’s been good long enough, and misbehave just in time for you to miss a critical move or block.  While not a deal breaker, the camera was annoying enough to make a mention of it in this review. 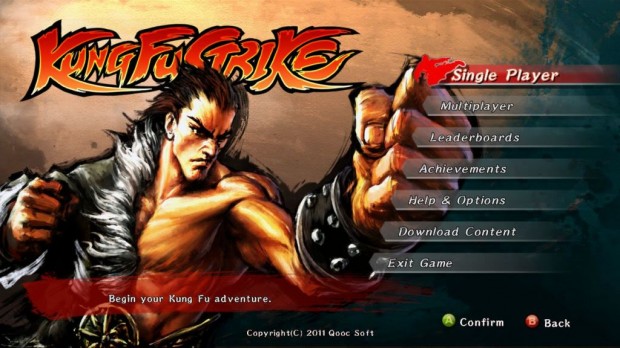 Kung Fu Strike: The Warrior’s Rise can be played co-op on the same screen, which is great.  Two people beating up wave after wave of monks and soldiers reminded me of the hours I put into Double Dragon as a kid at the local arcade.  What did frustrate me with this game play mechanic, is that essentially you and your partner share the same life.  If one of you is cornered and defeated, then the game is over.  For the minion fights, that isn’t such a big deal unless one of you just isn’t paying attention, but for the boss fights it can become annoying quickly.  Again, like many of the flaws of Kung Fu Strike: The Warrior’s Rise, annoying not game breaking. 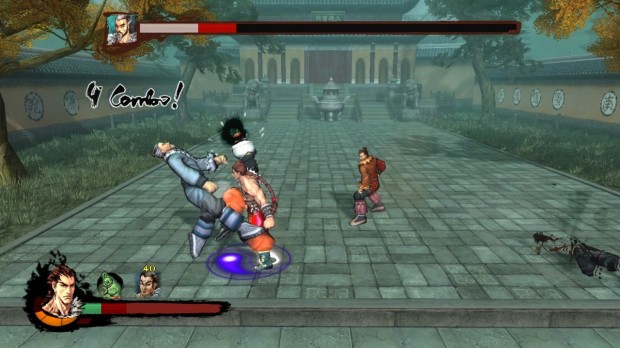 Kung Fu Strike: The Warrior’s Rise is done in a very similar art style to that done in Street Fighter 4.  The artists used heavy black lines to represent the ink in a Chinese painting to outline the world, and to highlight the moves of General Loh.  Ink blots will appear on your screen as you pull off major moves and spin through the air.  The visuals of the game look good, if not great and would be quite unique if it had not been for Street Fighter 4.  Still, overall, the game has a nice feel and look to it and utilizes the graphics well enough to give us a nice visually pleasing world to play through.  Level design is very basic and relies on the background textures to be interesting, and are all taken out of your typical Chinese kung fu design schemes.

Voice acting for Kung Fu Strike: The Warrior’s Rise is non existent.  The only voice work you will hear will be the typical grunts and yells of the stereotypical kung fu practitioner.  Sound effects are exactly what you would expect from this type of game; punches, kicks and other impact sound effects.  None of this detracts from the overall aesthetic of Kung Fu Strike: The Warrior’s Rise, but none of this adds to it either. 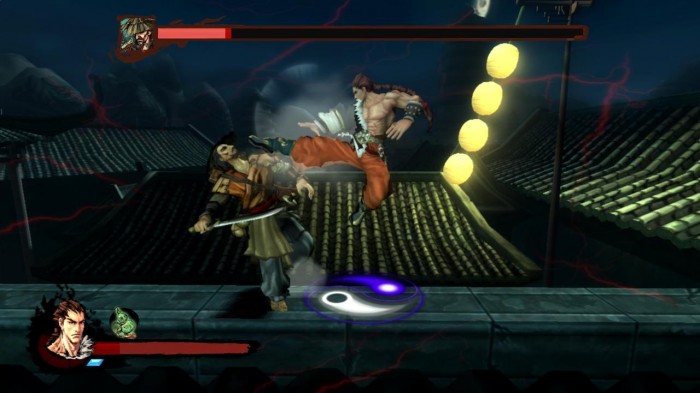 Kung Fu Strike: The Warrior’s Rise knows what it does and does not do well.  The game is very self aware that the only reason people will play it is because of the game  play and the old school brawler mechanics, not because of the story line or voice acting.  The game plays well and is fun, but truly lacks the polish and care that is shown in some other higher budget games.  The aesthetics, though borrowed from other games, are used well here and make the game look good.  Only a few issues made the game feel unpolished, like a camera that would misbehave every once in a while, and bosses that felt rather cheap sometimes.  These negatives, while annoying, don’t detract too much from the overall feel of Kung Fu Strike: The Warrior’s Rise.  Overall, this is a very solid throwback to the arcade beat-em-up game mechanic, playable from the comfort of your couch.  Kung Fu Strike: The Warrior’s Rise is available now for the XBLA.