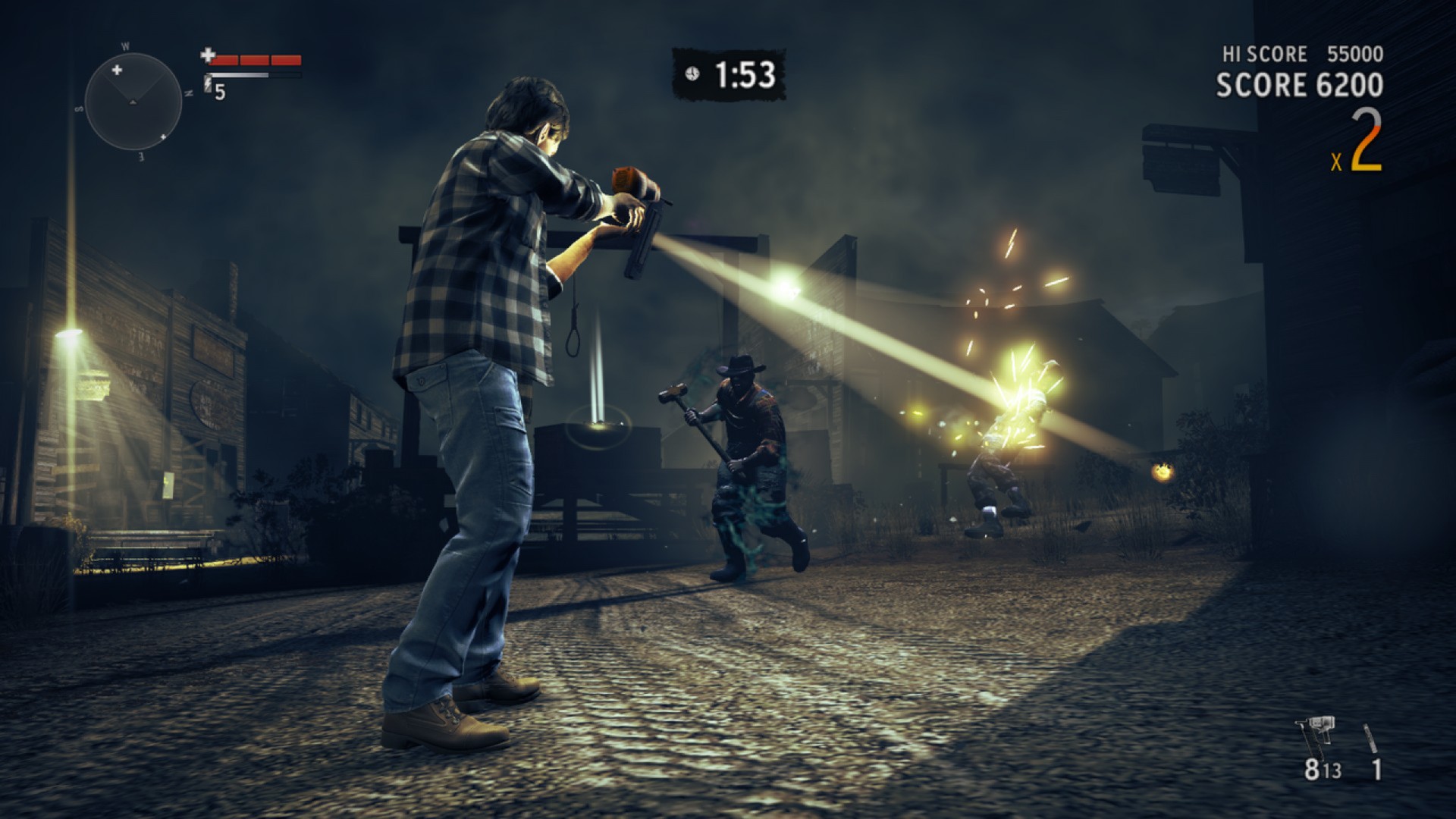 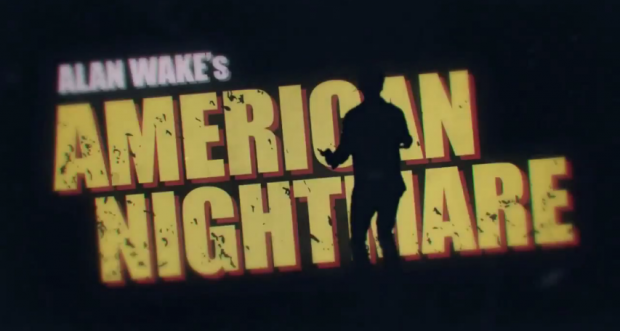 So if you are a fan of the site and regular reader or just someone who is interested in the Alan Wake series and stumbled upon the site while looking up reviews on the game you may have read the review of the game on the Xbox 360 back in March by my colleague and friend MikeySunshine. He has been a rabid fan of Alan Wake from the beginning and knows the lore better than anyone outside the developers probably.  So rather than giving a fairly rehashed review of the game since there really weren’t any features added I am going to approach the game from the point of view of someone who never picked up the first. I never got around to picking up Alan Wake and MikeySunshine warned me that American Nightmare might be an odd place to start the story, but here I am doing it anyway. 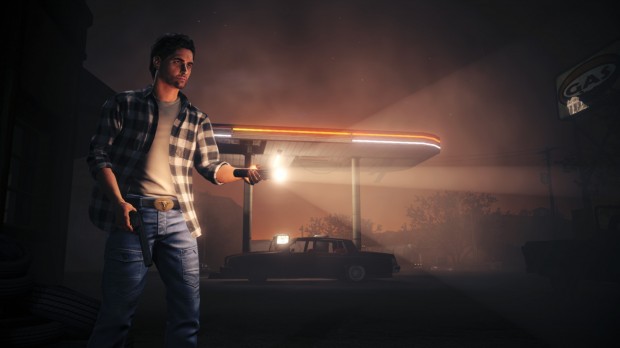 I went in knowing basically what I had learned from previews and what I couldn’t forget from chats with MikeySunshine when he played it which was mostly about graphics and that this is a side story, not a sequel in the true sense and that is a really good thing to know.  Its graphics are pretty good though the subject is mostly contrast between light and dark and the ground is mostly dirt with a few weeds and other desert life.  The buildings and vehicles all have a deserted, neglected feel to them that the graphics did a great job of bringing across.  Except for the odd person you come across who directly relates to your storyline the whole place is empty except for you, the Taken and Mr. Scratch who thinks he has come up with a way to get you out of his way once and for all.  This is where it gets tricky not putting in a spoiler because a key element of the gameplay ties directly and inseparably from the storyline.  So the next line is going to be a spoiler… skip it if you want to go into the story as pure as I did.

Mr. Scratch trapped him in a time loop so he plays the same three areas over and over three times.  The game runs around 4 hours and is only three maps repeated. 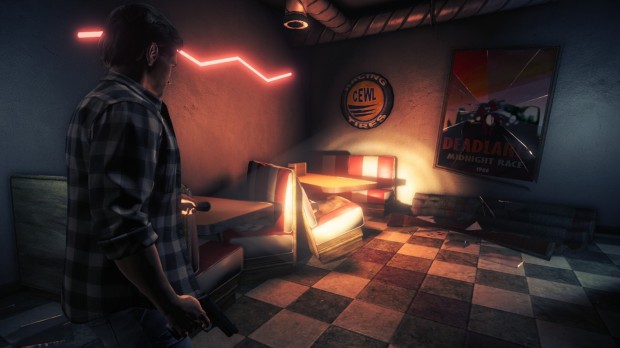 Even with (SPOILER OMITTED) the game still manages to feel fairly fresh as it continues with the enemies getting harder and harder as you go and the weapons getting better and better.  You collect pages in this game and they are used to help upgrade your weapons as well as help in the final showdown with Mr. Scratch.  Never pass up a page because there is nothing like finding yourself one page short of an upgrade and that upgrade might make the difference in surviving the ever escalating strength of the enemy. 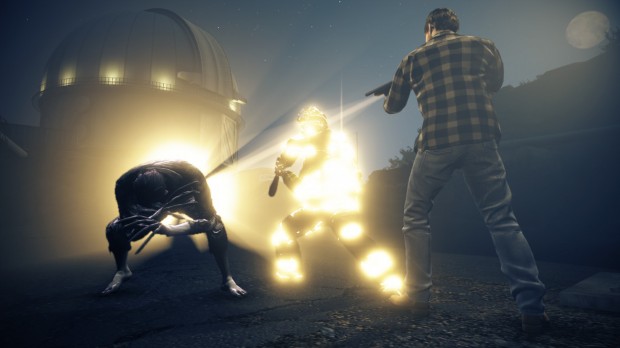 Controls are the same as your standard shooter on the keyboard, one of the biggest limitations being one that is more and more common, only being allowed two weapons at a time.  You want the fun satisfaction of killing with the nail gun but you know if things get hairy you’ll wish you had a magnum and an assault rifle.  My suggestion is on the lower levels use the fun items because you will probably want the heavy hitters later on.  Plus there are supplemental items that take up most of the other numbers where you would store weapons so it does make sense to a degree but personally I like to go into battle with every weapon available. 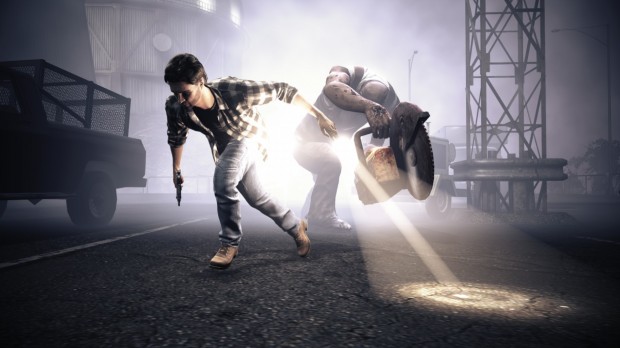 The storyline is a bit confusing and I won’t go into it too heavily here.  If you have played it or don’t mind spoilers you can read MikeySunshine’s review and get just about all of your questions answered.  If you want to remain spoiler free keep an eye out for homages to Twilight Zone, Night Gallery (Rod Serling’s often forgotten masterpiece show), the Saw movies, Reservoir Dogs, Natural Born Killers and the Grind House genre of films.  Most of the story is told in televisions where real video is shown and in cut-scenes which are also real video.  This I think almost takes away from the games graphics because they look a little poor compared to real video but not so much as to really take away from the enjoyment.  These combined with what is written on the papers give you the storyline which is pretty good if confusing.  I think the final boss battle felt a little anticlimactic but it made complete sense with the storyline so those just playing for the fighting know that though it might seem weak to you it works. 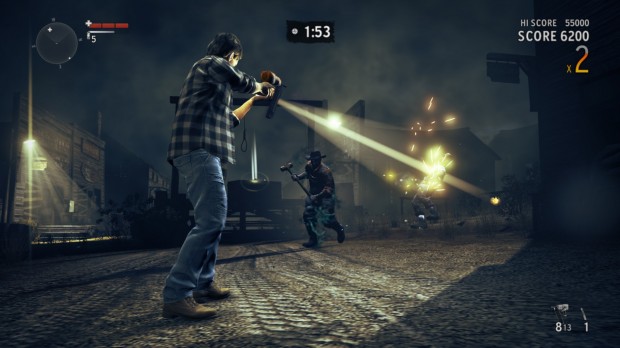 Besides if you are in it for the fighting you REALLY want to play the “Fight ‘Til Dawn” Arcade mode which has you survive waves for ten minutes and if you get high enough scores you unlock more maps and you get more than were in the storyline!  This isn’t a new idea in games but it does work well with this game because you have to not only worry about ammo but battery life as well as you run around the maps trying to survive.  It takes this kind of map a step further and makes it that much more exciting.  I am a storyline guy all the way but honestly I think this was more fun than the campaign and the variety of maps keeps you entertained and once you beat them you can unlock playing them in Nightmare mode.  The only problem with this, and some may say it is a pretty glaring problem, is that just like the main storyline it is single player only. 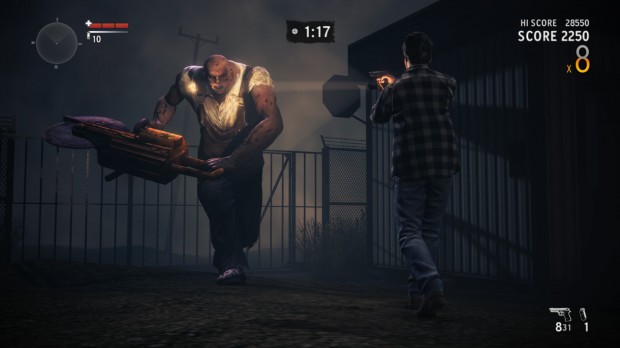 This is one of the harder last calls I have done.  I even gave myself an extra day to stew over the game before writing this to make sure I still felt the same.  At the time of publication this game is $14.99 which for a stand alone side story game that lasts about four hours almost seems slightly expensive.  But then when you consider all of the playtime you get from the Arcade mode it seems very reasonable.  So I think I have to put perimeters on my recommendation.  If you are a true fan like my buddy MikeySunshine this game is a must have.  If you like a good fighting game, especially with a great Arcade mode then this is definitely a game for you, just remember you are playing solo (there are leader boards).  If you are new to the series, just care about a storyline and the idea of (SPOILER OMITTED) bothers you then maybe you should wait on this one, start from the beginning and see if you care enough about Alan to follow this journey.