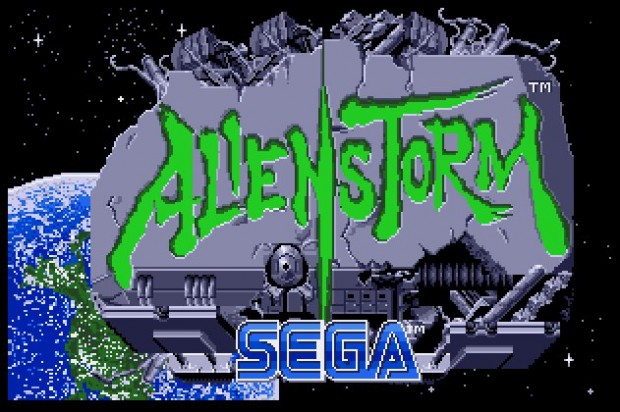 Let’s face it we had a pretty decent obsession with aliens back in the days of Sega.  Most of us still have that obsession which brings us to revisit games like Alien Storm and find dozens of other outer worldly creations that go bump in the night.  For now we will pass up on nocturnal fixations (probing!) and talk about a game which had one of the most interesting takes of all time on aliens: possession.  Ok Ok I know you are saying that really isn’t that much of an interesting take but I didn’t finish… possession… of mail boxes.  Here you are walking down the street right after some UFO (well it is an alien saucer so it is identified) buzzes you, carrying some giant fancy plasma gun, whip or flame thrower and all of a sudden the phone booths and mail boxes come to life and start opening a can of whoop ass. Speaking of which, the garbage cans open whoop ass cans themselves!  Good thing you were walking along heavily armed!

You are part of a group called “Alien Busters” and aliens want to dominate the Earth so you are here to stop them!  That’s about it.

It is kinda fun to run around attacking every object you see in the streets!  You use all the arrow keys because the game is a side scroller with depth so you find yourself needing to move up and down to dodge and land attacks.  But then the game suddenly becomes a first person rail shooter sliding sideways as you shoot up enemies in a warehouse earning energy for the next level. 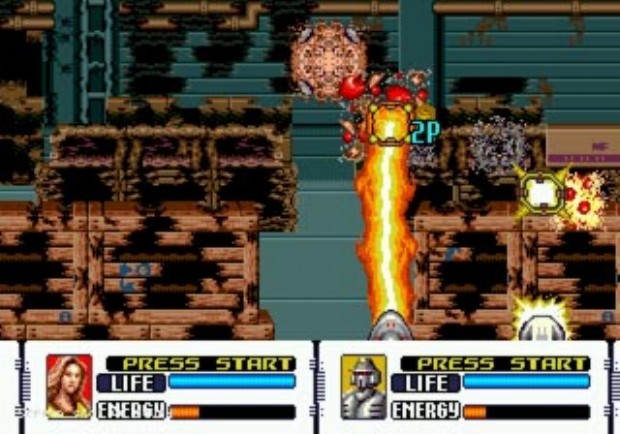 Then it is back to the side scrolling play for some more action and boss fights.  Then suddenly you are on a running level moving really, really fast and your only way to get through is by shooting, moving up and down and jumping over enemies.  For a moment it throws you for a loop and you might take some damage but it is fun because once again it has changed up the play style.  And these are the things that really make the game work.  Sure it is fun and funny to have garbage cans and mailboxes come to life or fight aliens that look like the Creature From The Black Lagoon or The Thing (the original with Kurt Russel) but most of the games real fun lies in it’s ability to change between styles so much, a diversity we really don’t see in games much except the occasional “mini-game.”  If the game play gets too hairy you can use your energy for special weapons attacks. 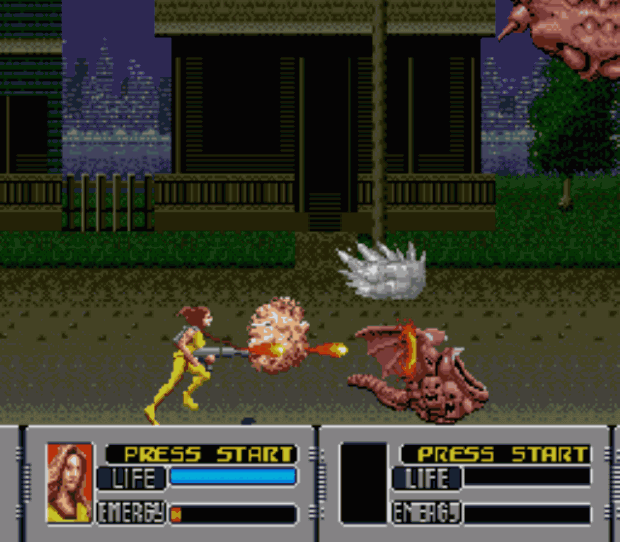 The graphics aren’t great and they aren’t bad, they are actually a decent example of games at that time.  I remember playing some other games on systems with almost identical movement just very different themes.  The music has the wonderful arcade/console music style of the time and just adds to the charm.  The game looks old school but has quality play that has stood up to the test of time.

When it comes to playing the classic Sega games it really comes down to feelings of nostalgia, history, and having fun with games that were in a way often simpler.  This game has no deep plot, uses arrow buttons and a few keys (or three buttons and a thumb control on the controller) but it is fun to play, a silly premise and can be a challenge with the change ups in play style.  This game is a great example of why we pick these retro games up and give another go at them and there are around 40 of them in the OnLive $9.99 a month PlayPack with over 160 other games.  If that isn’t enough of a seller, you can demo them and just about every other one of the games that OnLive offers at http://www.onlive.com/promote and make sure it is worth your money.